Don't forget he has a weight of at least 4 tonnes (Range Rover, Activa and trailer). Even with a Range Rover that won't accelerate in a hurry.
Top

I came over the A66 a few times with the caravan. With the pug 806, 5 bodies, twin axle elddis superstorm bikes and a fortnight worth of other gear we certainly weren't the fastest thing on the road. It was a 1.9 td. Still it coped admirably. Probably well over weight too, the car not me lolol

The places you want to be avoiding on the a1 around rush hour are just above the black cat roundabout (where the a421 spurs off towards the m1) Google Wyboston and you'll see it. Another bad place to be is south of biggleswade all the way down to the a414 (which I believe is roughly where you'll be getting off)

M1 wise, hmmm, well it will flow better than the a1 but as said, its further to go and then you have to contend with the m6/m1 interchange. You don't have to touch the m25 though, you'd use the a414.

I work in st albans so I've used the a1 in the past to get there from where i live (bedford/ milton keynes) and the a1 is a pig, seriously nose to tail for most of the way. If it were me I'd either get clear of stevenage BEFORE 7am or take a nice cruise and stop at the services just north of there and wait until after 9am.

Whichever way you go, you WILL get stuck so get some good tunes in the car and think of the es9 loveliness to come

The reason I mentioned the M25 was because if I was coming down that way I was going to meet Northern Mike to drop stuff off at Beaconsfield Services.

I don't mind the A66 to be honest, it's not a bad road anymore as long stretches of it are dual carriageway anyway.

I'm thinking I might as well get across from west to east as early as I can into the journey. We'll see... I'll probably end up deciding on the way to be honest.

The engine crate has been finished and tidied up and is being collected tomorrow (Tuesday) and is supposed to be getting delivered on Wednesday.

Last night was a long night. I had to repair a bracket on the Range Rover bumped which a bolt had rusted through on letting the passengers side corner of the back bumper drop slightly. That was done, I noticed yesterday the back brakes on the Range Rover were squealing, upon stripping them down I found a little stone in the pad so that little bugger was removed, after that the Range Rover was due a service so that was done too.

After that I decided to tidy the engine crate slightly as when I went to book it yesterday I was offered today for collection. At 2.30am this morning I went back into the house to book the collection and someone had beaten me to the slot so it's Tuesday now.

I've got someone elses Range Rover to collect and repair tonight and hopefully deliver that home tomorrow evening, then Wednesday and Thursday evenings will be spent packing the car and trailer with stuff

My goodness you're a busy person David

I thought I was but against you I look positively lazy!
Top

Well the Range Rover is sorted, it's not running well but it's running so it's going back to it's owner now the electrical fault is dealt with.

I must admit to being incredibly relieved that I sent the engine and gearbox by pallet. There's no way I'd of gotten everything in the car.

On a pallet with a crate round it, the ES9J4 engine with the ML5T gearbox attached to it weighs 440kg! I didn't think it'd be anywhere near that until the guy who took the pallet weighed it.

That's almost 1/2 the weight of the car!! I wonder how much a tct and box weigh in comparison or the auto and v6 combo...
Top

Must be D-Day now, surely ?

Well, last night I double checked and ensured that everything was in the car, I then hitched the trailer to the Range Rover and put the Activa on the trailer. 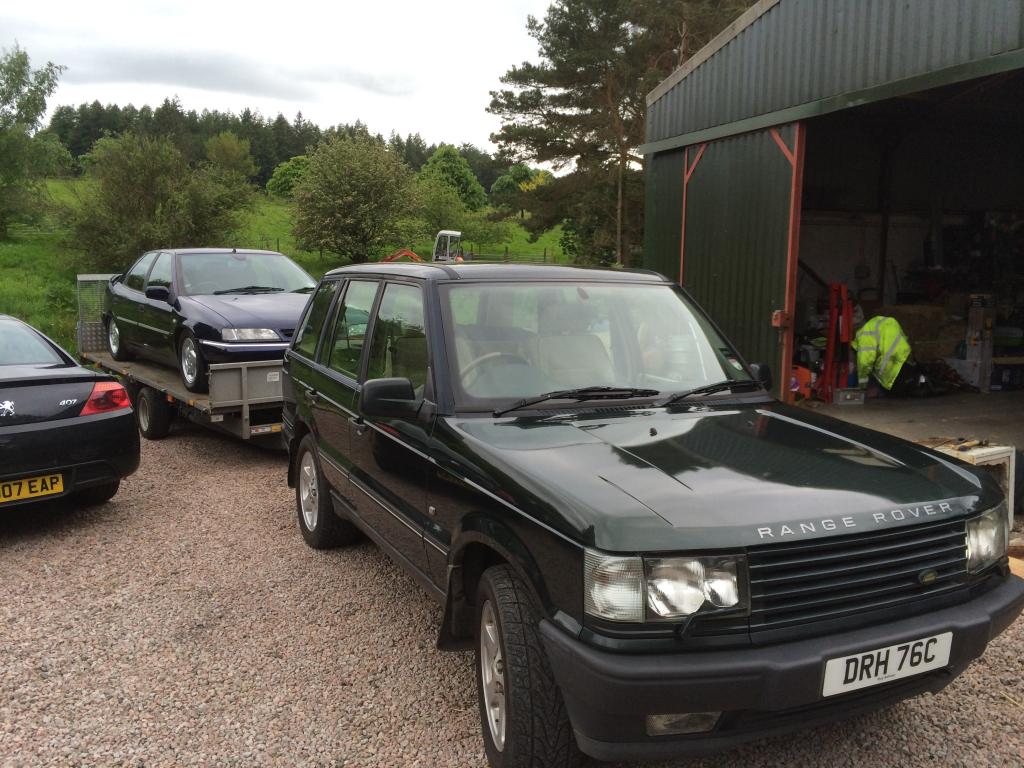 I ran around the car, got my backpack with the trailer keys in it, unhitched the trailer with the Activa on it and pushed it down the hard shoulder to get it away from the Range Rover. I then ran back to the car and managed to get everything out of it before the fire got to the back seats. I was emptying the boot as the front seats were burning. 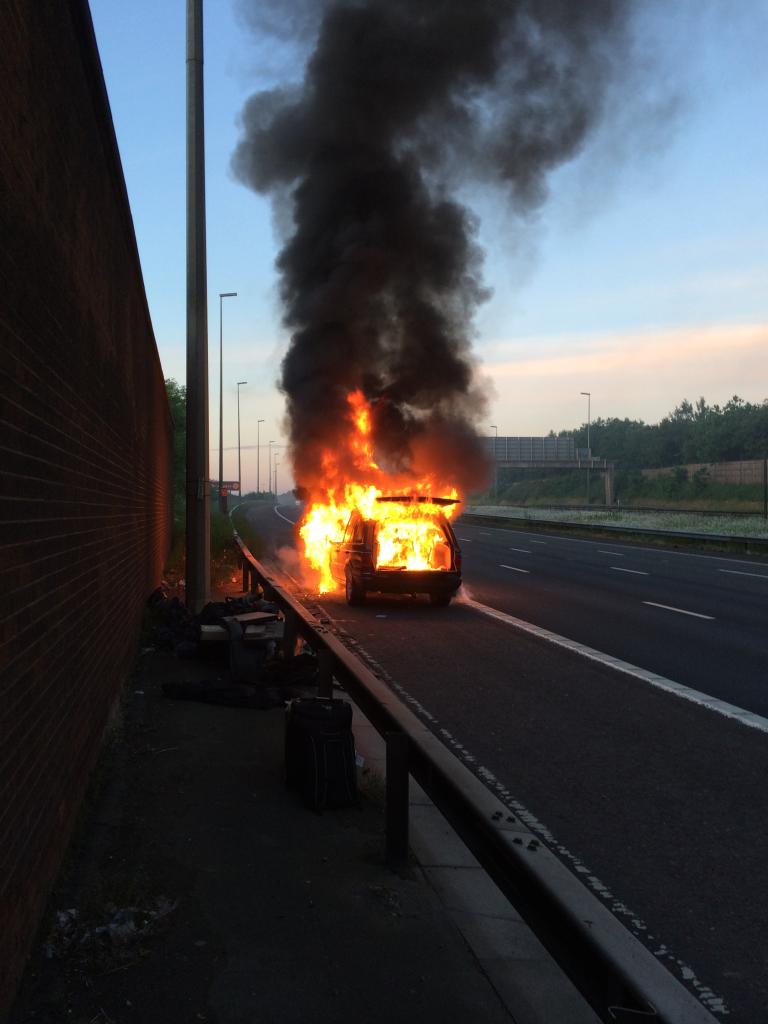 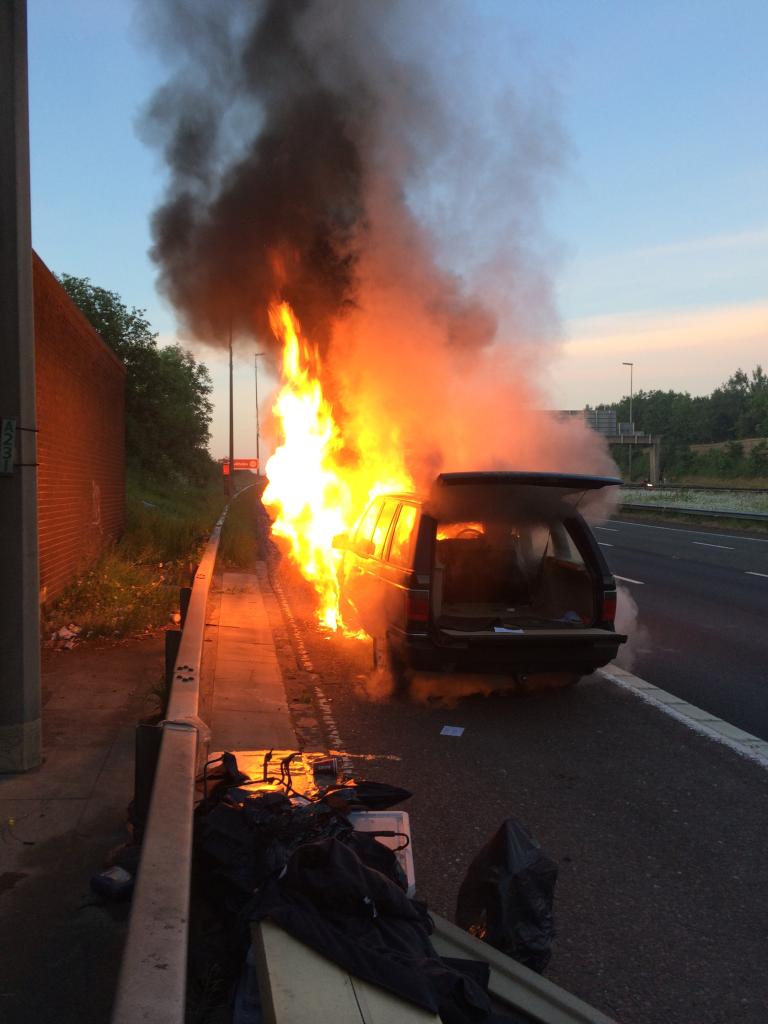 The Range Rover is now a burnt out shell and looks like this... 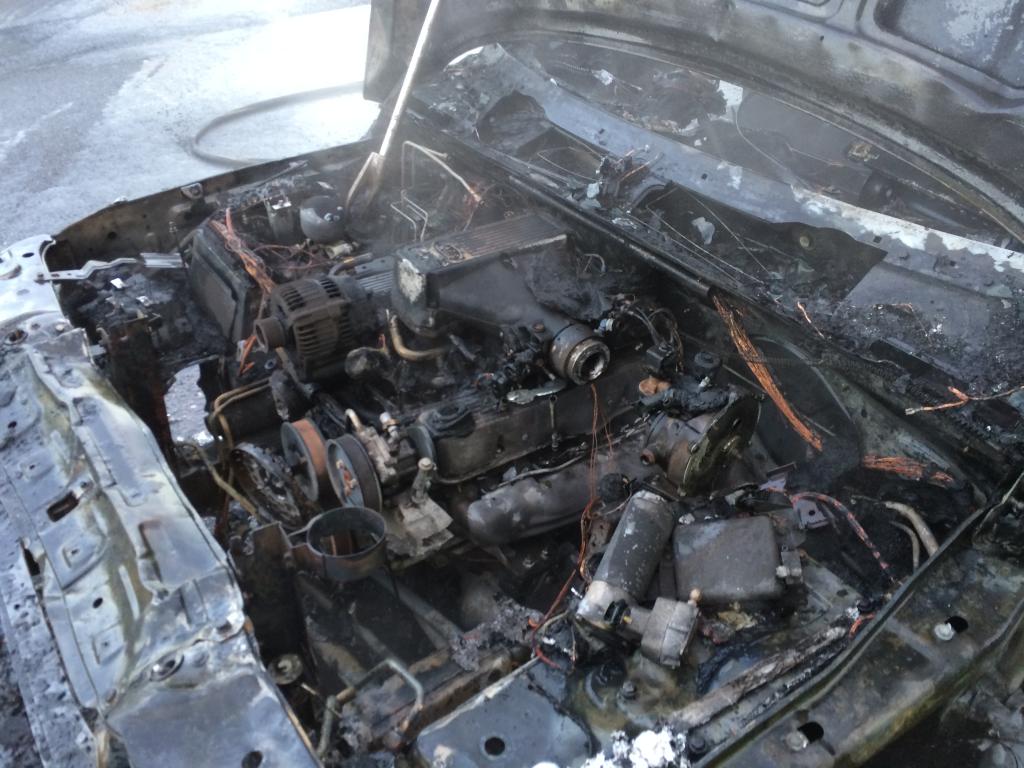 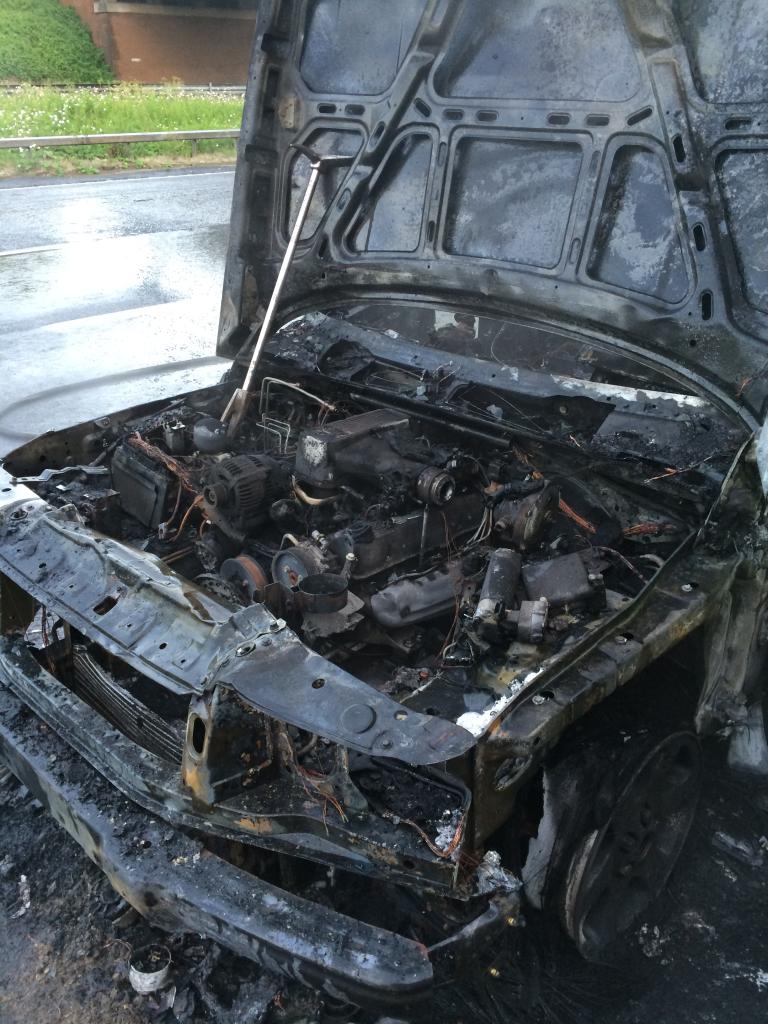 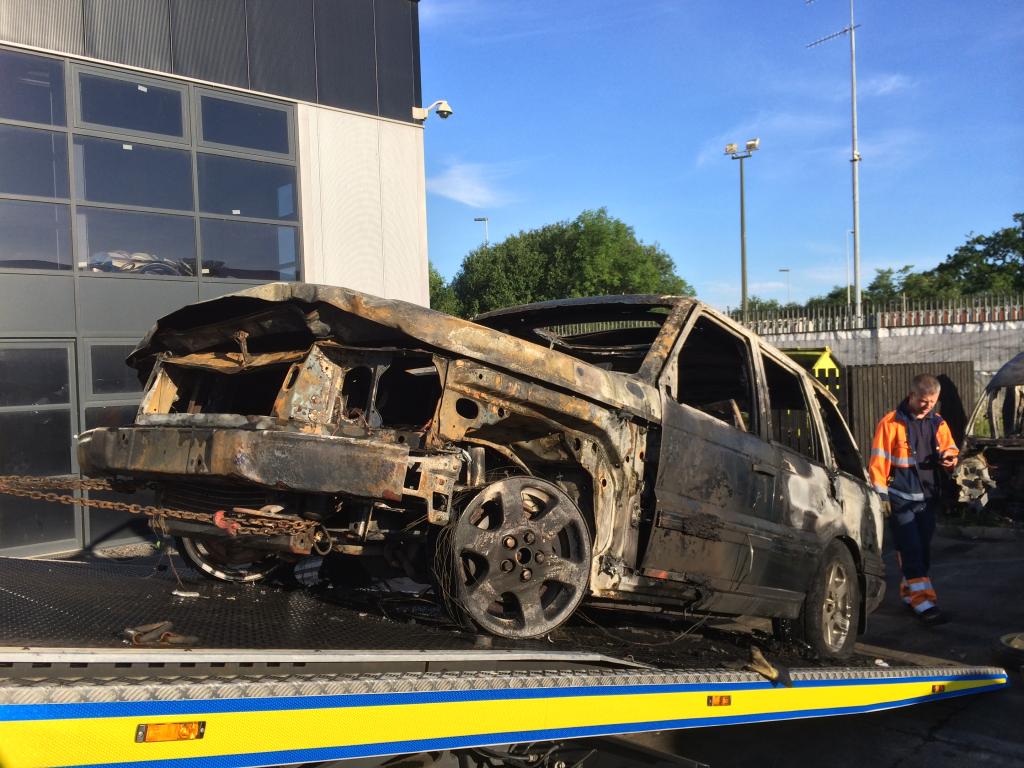 The Activa and I continued our journey to Welwyn Garden City like this... 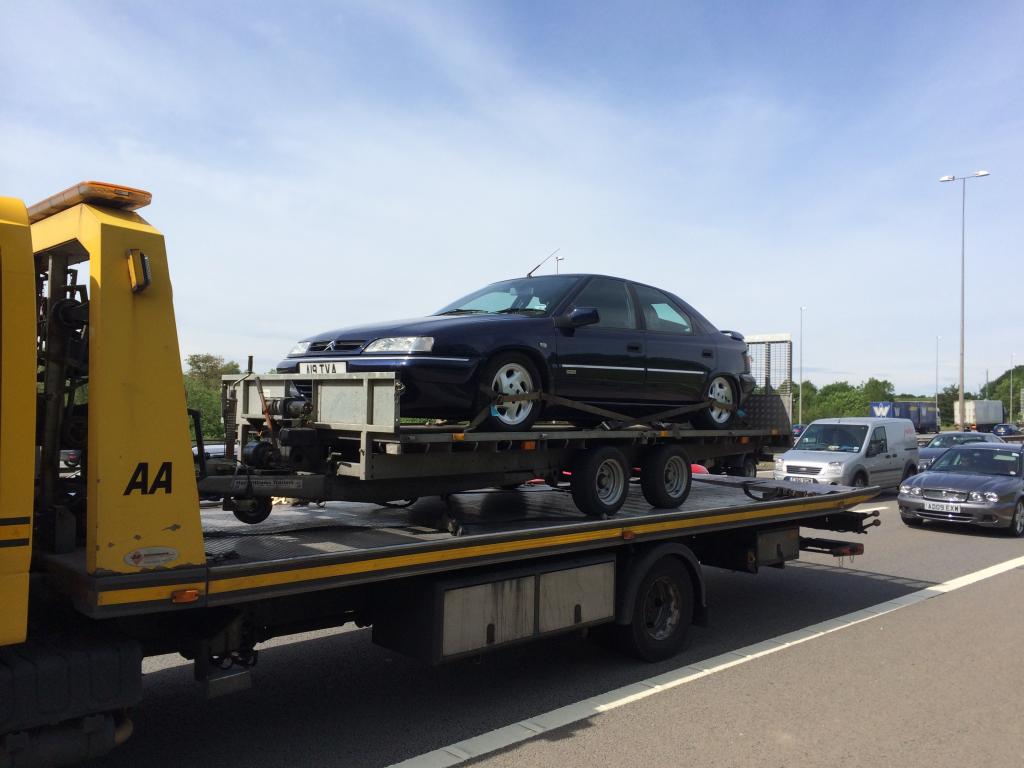 We came off the M6 toll road to find the M6 closed due to a lorry fire so we were delayed for 3 hours there. Then we had to be dropped at another services to wait for another lorry to relay us to WGC.

So... the Activa is now at BL Auto's. Unfortunately due to the delays incurred they are about 4 hours behind where they wanted to be but there's nothing that can be done unfortunately. There was a few things I didn't manage to rescue from the Range Rover... my Oakley sunglasses which were a present, TomTom cradle for my iPhone and the one that's annoyed me more then anything... my wallet

Hopefully tomorrow will be filled with some better news!

Just need to figure out how I'm going to get the trailer home again now. The Activa is fully legal so can be driven but unfortunately it doesn't really have a tow bar and I'm not overly fussed at the idea of fitting one

worrying what has caused it though David.
Do you know roughly where in the fusebox it could have started? Quite worrying really but any car is a fire risk I guess as they do run on the most dangerous of liquids

I really feel for you as I know how scary it can be when a car self combusts but luckily I've never had one go further than the engine bay!

How many others have you got back home to take her place now is it 3? Or more?!

The important thing is you are ok. The cars can be replaced or rebuilt but a person can't be...
Top

Holy s**t. That's awful David. Glad to see you're ok. Things can be replaced. People can't. my dad's 14 month old, 12,000 km Twingo went up in a similar fashion years ago. Scary stuff indeed. Two things he also left in it were sunglasses and wallet.

I agree. At least you are OK, and, more by luck then judgement, BL Autos can get things done because you shipped the V6 and gearbox rather than take them down in the back of the Range Rover!
Top
Messages: 1861