Something that has been delivered.. Some ES9 Pictures David..

Shout if anything else is needed David....
Top

I managed to get the correct sealant from Halfords this afternoon, they stock it but under a different name so you're timing is perfect as I've just finished cleaning up the first cam box!

What's the name of the Halfords stuff? I ask as it's a job Team WFA are going to need to do on an ES9 fairly soon...
Top

If you go to the Halfords website and search for Loctite Quick Gasket then the stuff comes up.

If you search for Loctite, Loctite 5980, or instant gasket it doesn't appear. It's very easy to use as it's in a pressurised container so you just squeeze the lever and it dispenses it at a nice steady rate.

The labelling on the bottle in store is slightly different from that. It says Loctite 5980 on the can which is the same as the stuff Peugeot dealers use. Apparently this is THE ONLY stuff they will use for any gasket on any engine.

Here's a picture of it with one cam box removed, before I'd mopped all the old oil out: 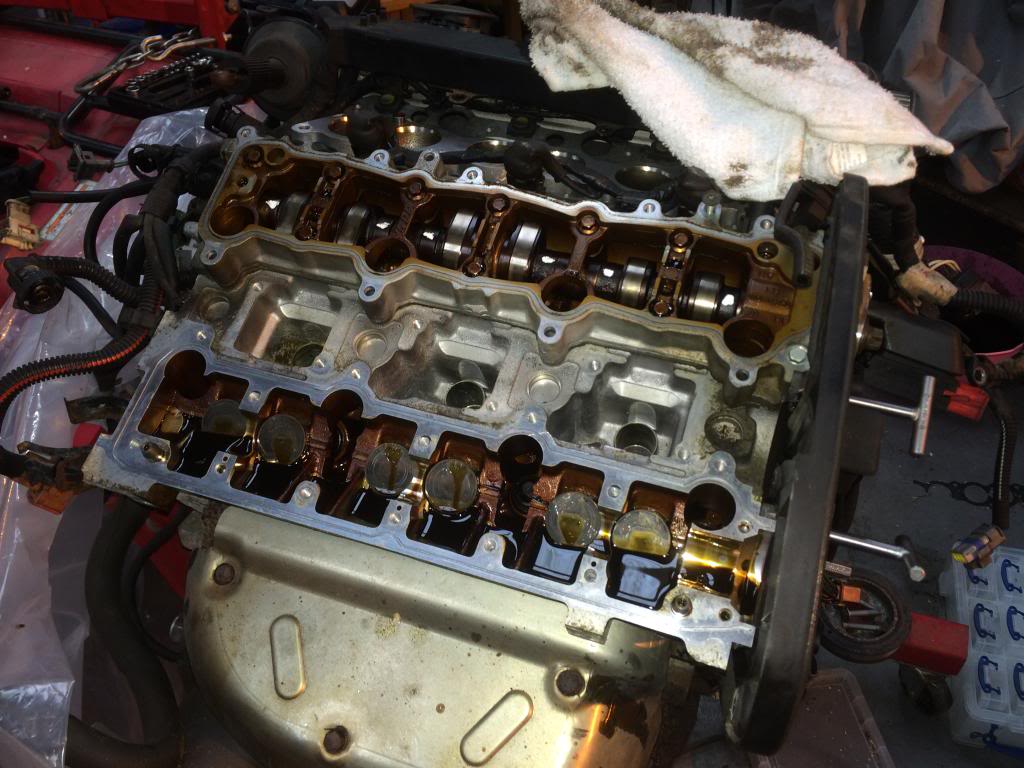 I didn't take many more pictures as my hands were covered in oil and I didn't want to get my iPhone filthy.

I did have a panic moment... I was doing the last rocker cover when putting it all back together and with oily fingers I managed to drop one of the last bolts I was putting in. As it happened I'd removed the spark plugs last night when I was finishing off as boredom got the better of me as I was in the workshop. Just by chance the screw managed to find it's way straight down the plug hole and into the bore.

A quick trip to Tesco and £1 later I arrived back home with this: 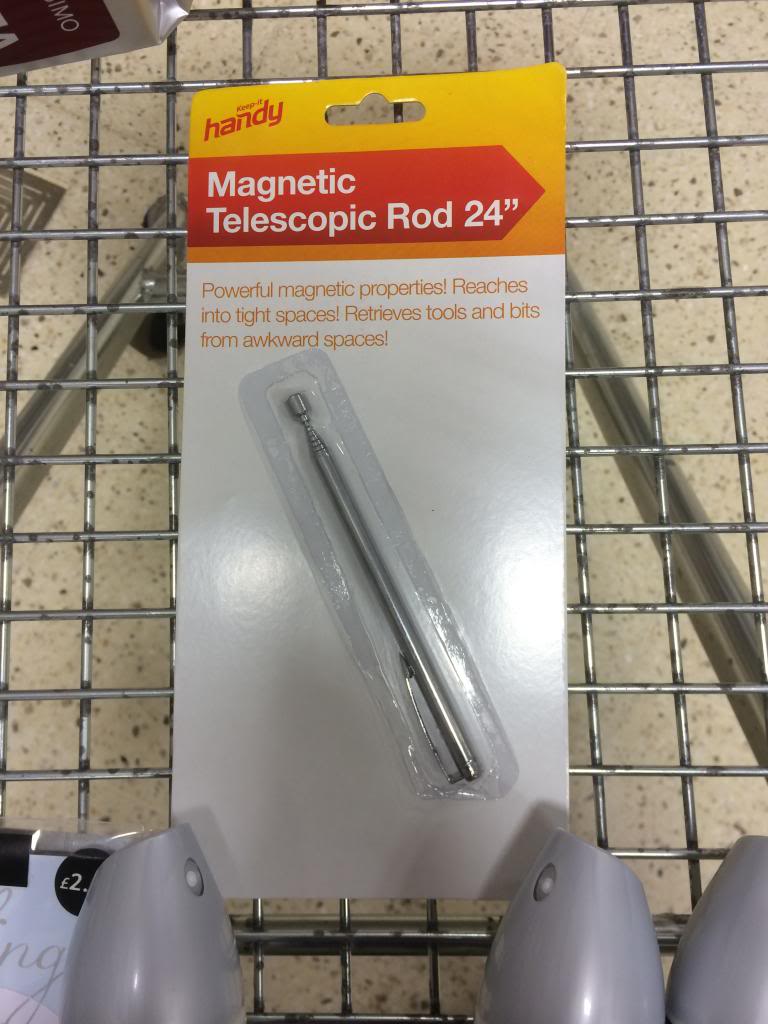 I bent the end of the magnet slightly and fired it down the plug hole after the bolt and thankfully it gripped the bolt and pulled it out - MASSIVE sigh of relief!

Anyway, the top end is now back together apart from the inlet manifold and spark plugs as it'll be so much easier to turn over after fitting the timing belt without the plugs.

I took the sump off tonight to reseal as it was leaking as well, a couple of the screws were actually loose so am hopeful that with a bead of this Loctite stuff it should stop leaking. Interestingly the sump had a gasket round it the same as the rocker covers. It is no more though as it came off when I was steam cleaning the sump. I'll wire brush the sump tomorrow and give it a fresh lick of paint before refitting and at least then it'll be nice and clean to go in the back of the Range Rover as we venture down south.

That's all for tonight, more to come tomorrow.

That sounds a much better way of despensing the stuff than from a tube..

Relief you retrieved the bolt

Gosh I know how you must have felt when that nut fell into the spark plug hole.

I'm very careful to always stuff some kitchen roll into the intake manifold runners the instant I get the manifold off to avoid just such an occurrence.

And yes, I have one of those extendible magnet-on-a-stick tools in my tool box now too - it's saved my bacon a few times and I find myself using it quite often to hold things more easily during assembly not just to rescue lost bolts. (fuel rail bolts are a good example as they have to be passed through an adjacent hole as the head of the bolt doesn't fit through the hole in the plate!)
Top

Mandrake wrote:
Gosh I know how you must have felt when that nut fell into the spark plug hole.

I'm very careful to always stuff some kitchen roll into the intake manifold runners the instant I get the manifold off to avoid just such an occurrence.

He he - I've done that, when changing the glowplugs on a BX TD which involves removing the top mounted intercooler. I stuffed a bit of kitchen paper into the inlet to stop anything falling down. Then cranked the engine

It initially refused to start, but eventually caught in a huge grey cloud of unburnt diesel, with bits of blackened kitchen paper floating in it

RichardW wrote: He he - I've done that, when changing the glowplugs on a BX TD which involves removing the top mounted intercooler. I stuffed a bit of kitchen paper into the inlet to stop anything falling down. Then cranked the engine

It initially refused to start, but eventually caught in a huge grey cloud of unburnt diesel, with bits of blackened kitchen paper floating in it

Heh heh. I haven't managed to do that yet, but I've come close a couple of times, which is why I now take the starter inhibit relay out before I remove the manifold. So I have paper in the runners to stop bolts being dropped into them, and the relay removed to stop the paper being sucked into the engine!

(also the reason why I use paper instead of rags - unlikely to do any permanent damage if I did forget, I hope...)
Top

Well, at 02:05 this morning the last bolt went into the engine and completed reassembly.

The only thing left to do now is change the flywheel to the manual one, insert the bush into the end of the crank for the manual gearbox stub to sit into and then mount the clutch and gearbox.

We're getting there slowly!

The original quick gasket stuff I ordered still hasn't turned up over a week after ordering it. The gasket paper has finally arrived today so I can get the hydraulic pump finished and mounted too. The air con compressor and freshly rebuilt alternator are already in place.

Well the C5 has gone.

There was a chap from Linlithgow who bought it from me and asked me to deliver it to him last night. I obliged without any hesitation as the guy had left a deposit to cover the cost of 12 months tax. The car has probably done about 300 miles since it was laid up and it's been fine.

It drove all the way to Linlithgow last night without a fault, engine was silky smooth, cruise control held us at a steady 70mph all of the way there, really quite a pleasant journey.

I pulled into the fellas driveway, left the car running and let him have a good look round it. He climbed into the drivers seat and started to have a look at the interior and then all of a sudden BEEP BEEP BEEP and the Service light came on on the dashboard. Looking at the screen it displayed "Automatic Gearbox Fault".

I couldn't believe it! It was banging from Neutral to Reverse and Neutral to Drive so was obviously in limp mode or something.

The guy wasn't best pleased which was completely understandable and I was utterly gobsmacked as it had driven so well all the way over. I'm guessing as the fault occurred when it was stationary it's probably electrical rather then mechanical but who knows.

Anyway, the guy revised his offer to a figure that we were both happy with and he's going to get the gearbox looked at. I really hope it's something and nothing as the car has had so much done to it.

On another note, I think I've pretty much finished stripping the Mallard Green Xantia so if there's anything anybody needs then shout now!

That is a blinkin shame that with the C5 after work and hassle.
Top

Just one of those things unfortunately.

I wish it had done it when I used it a bit rather then when I delivered it. I felt bloody awful that it had come up on the screen the moment the guy sat in it!

David, I only have one thing to say...

Seriously though, that's an absolute shocker and I really feel for you after all the TLC you’ve devoted to that car

I'd have given it a damm good thrashing in the style of Basil Fawlty...
Top

A gallon or petrol and box of matches was seriously tempting Jim. Especially after I'd just put some fuel in it.

Hey ho... It's less then a month now till the Activa becomes a V6 so I'm forgetting about the C5 and looking forward to that instead.