The Xenon light washer requirement seems a bit ambiguous.
My brother had a 307 for a while, which was factory fitted with Xenons but no washer system.
He now has a Mondeo the same.
Not sure of the year but I think the 307 was an 04 and the Mondeo a bit more recent.
Top

My sister flew into Manchester Airport this morning after having 2 weeks on holiday in Goa. She got to her car in the long stay car park, put the key in it and it wouldn't start.

She called the AA who turned up, cracked the plastic housing on the coil pack taking it out, broke the capacitor on it when they took the bolts out of the coil pack, they also for some reason spliced in a piece of wire going into the plug on the coil pack before deciding that there was a wiring fault on the car that they couldn't fix and recovered her to Glasgow. I spoke to the AA man briefly who said that it's a wiring fault or crank sensor fault as he was loading her onto the lorry.

Anyway, about 8 hours later she arrived home on the back of the lorry, I stuck Peugeot Planet on it and confirmed that the ECU was showing no engine speed at all so I removed the sensor and swapped it with the one from our C3 and it started straight away. I then cleaned the old one from the 307, put it back in, tried it and the car started straight away.

So the AA man had already hinted at the crank sensor, it's a 10 minute job to clean it but they decided to put her on a lorry and recover her from Manchester. It was a cheap way of her getting home but it's no wonder they're putting membership fees up every year when they don't even try the simple things!

I think it's like everything really and depends on who you get on the call out.

Mines been well worth £40 for the year so far for 2 callouts!

Your sister was within walking distance of me David!
Strange the sensor just went, I thought you got some warning with them usually?
Top

Had this crank sensor issue on a HDi. It was a non starter... had fuel, had air, had a cambelt, so I took it out, just wiped the end of it without thinking, stuck it back in and boom off she went!!

Ive mentioned Crank sensors to others with non starters but been brushed aside with it, so decided, pah what do I know...
Top

Can't believe they just fail though

kinda sucks but they are French lol
Top

My old green 24v XM had a crank shaft sensor pack in...

Started it one morning, drove it into the shed and onto the ramp. Phone rang so I switched it off, 30 mins later went back to the car to start it so I could get it on high to crack the rear spheres and she wouldn't start. No spark, completely dead. Took the crank sensor out, gave it a wipe, refitted it and she started first time.

Had this thing out for a proper run tonight and filled it with fuel for her run back to Newcastle in it tomorrow and it's running like a sweetie.

Started it one morning, drove it into the shed and onto the ramp. Phone rang so I switched it off, 30 mins later went back to the car to start it so I could get it on high to crack the rear spheres and she wouldn't start. No spark, completely dead. Took the crank sensor out, gave it a wipe, refitted it and she started first time.

That's a bit of a worry, the crank sensor in the ES9J4 is a variable reluctance sensor, the nature of how it functions means that any dirt that might have been on it or in the gap (provided it wasn't ferrous) wouldn't have any effect on its operation, so cleaning it would only have been a placebo I'm afraid.

Its far more likely that you've got an intermittent break in the lead, possibly near the sensor end and that the act of physically removing and refitting it has disturbed it such that it's making contact again. If you're lucky the twist of the lead may keep it working reliably, if you're unlucky it will probably fail again at some random and inconvenient time.

IMHO cleaning a variable reluctance crank sensor won't do anything, I'd be replacing any crank sensor that miraculously starts working again after removal and refitting whether cleaned or not.

Remember you had a very similar issue with your C5 where it was working fine one minute then wouldn't start the next, then intermittently tried to work when you fiddled with unrelated things, (which were probably tugging on the harness) in the end you replaced the sensor - I guarantee it was a broken wire or a crack inside the sensor where the wiring attached.

At one point I thought I might have an intermittent crank sensor on mine contributing to the intermittent poor running I was seeing, if it wasn't so difficult to replace I would have replaced mine long ago...
Top

Citroenmad wrote: Stick with the XM and Xantia, 90's cars are the best ...

I completely agree with that

Well the C5 is now wearing two reconditioned callipers, 2 new callipers, discs and pads all round and 4 new tyres. Just got to bleed the brakes now, fit the exhaust and hopefully MOT it shortly.

Yes, I hope the C5s MOT goes to plan David

Well that's us just back from a weekend away visiting my cousins just outside of Warrington and another long trip under the 407 Coupe's belt. It ticked over 25,000 miles on the way home tonight and is running beautifully.

I decided on the way down that as I'd managed to get a free download on the net for the navigation firmware, maps and speed camera database that I'd have a go at updating it. I was touching cloth for the hour that the firmware update was going through. The car sits reading the information from the disc as it updates and I was petrified of a bump upsetting it but all was good in the end

This is the screen that you get whilst the update is going through: 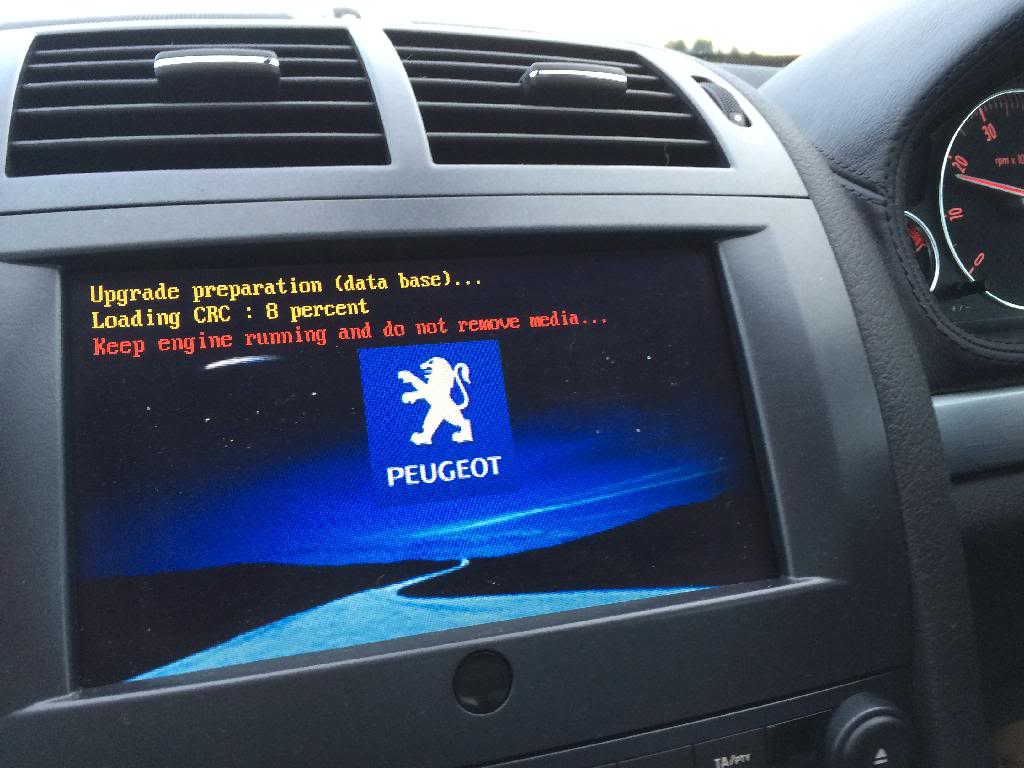 Once the update is finished it reboots and it came up with the new Peugeot logo. It's much more curvy then the old one. Much like what Citroen did to the chevrons. 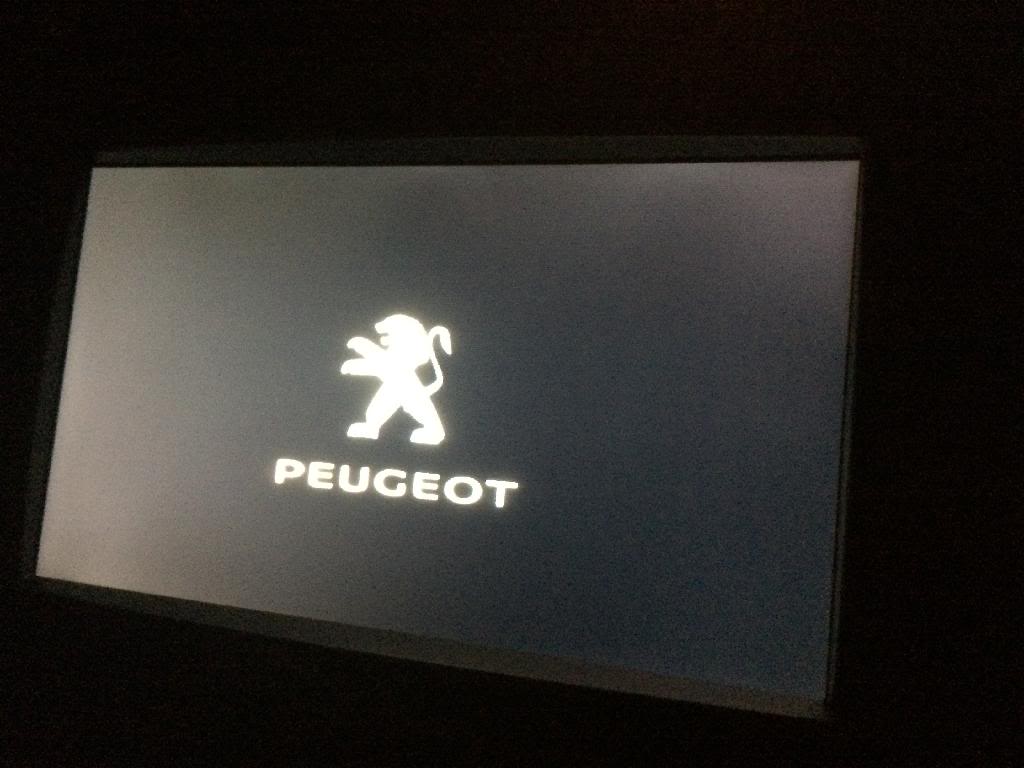 One problem I've always found with the navigation in this car is that it's very bright at night and can get annoying. If you turned the brightness down it sorted it but if the headlights came on before it got dark it became very hard to see the screen due to the brightness going down with the lights. The new firmware adds a new night mode to the navigation: 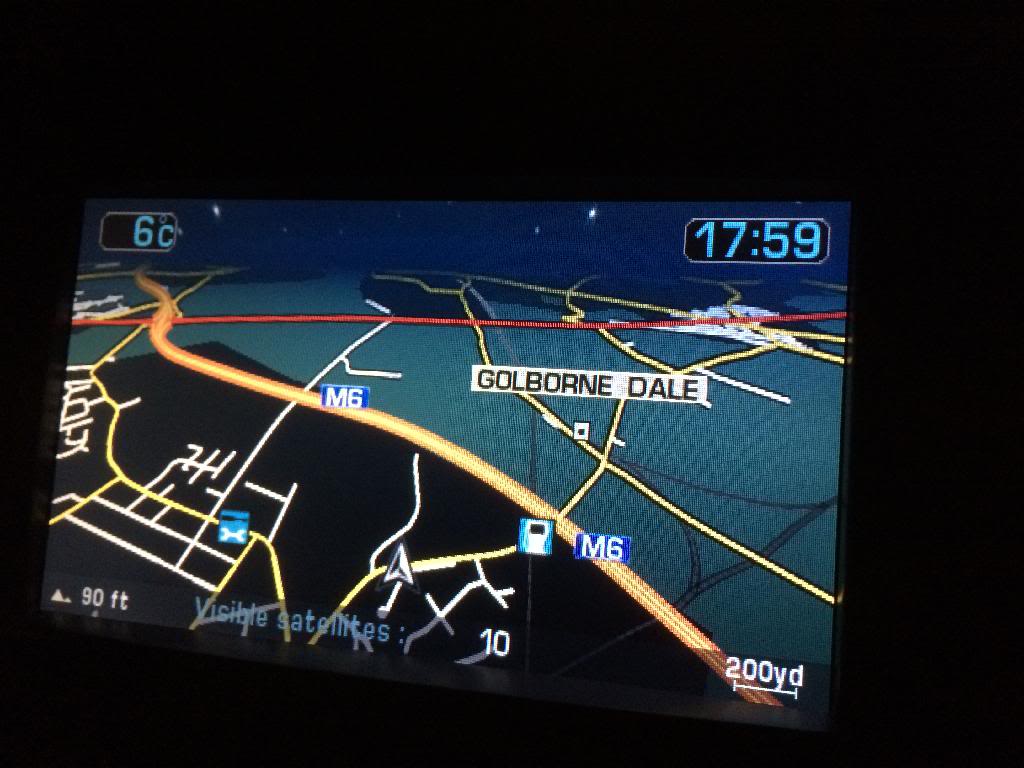 Over the 223 miles from Glasgow to Newton le Willows on Friday the car averaged 34.5mpg. This was after we'd come off the motorway and spent a few minutes idling at traffic lights etc. When I came off the M6 at junction 23 it was reading 34.9mpg. This was running on Shell V Power Nitro+. It used half a tank from Glasgow down.

We came home today and I took the backroads between Shap and Penrith and managed to get into spirited driving mode with a guy in a 6 month old DS5. After we got back onto the M6 and settled down again I was talking to Cheryl and reckon that this has to be one of the most accomplished cars I've owned. It's comfortable, quiet and effortless on the motorway, economical too when driven sensibly yet when you get to the backroads it instantly transforms and becomes a great car. It doesn't corner anything like the Activa but you can certainly have fun in it. It ticked over 25,000 miles on the M74 today on the way home too.

We were in the centre of Manchester on Saturday afternoon and much to my surprise I saw 4 H Vans parked together being used for serving food and drinks. 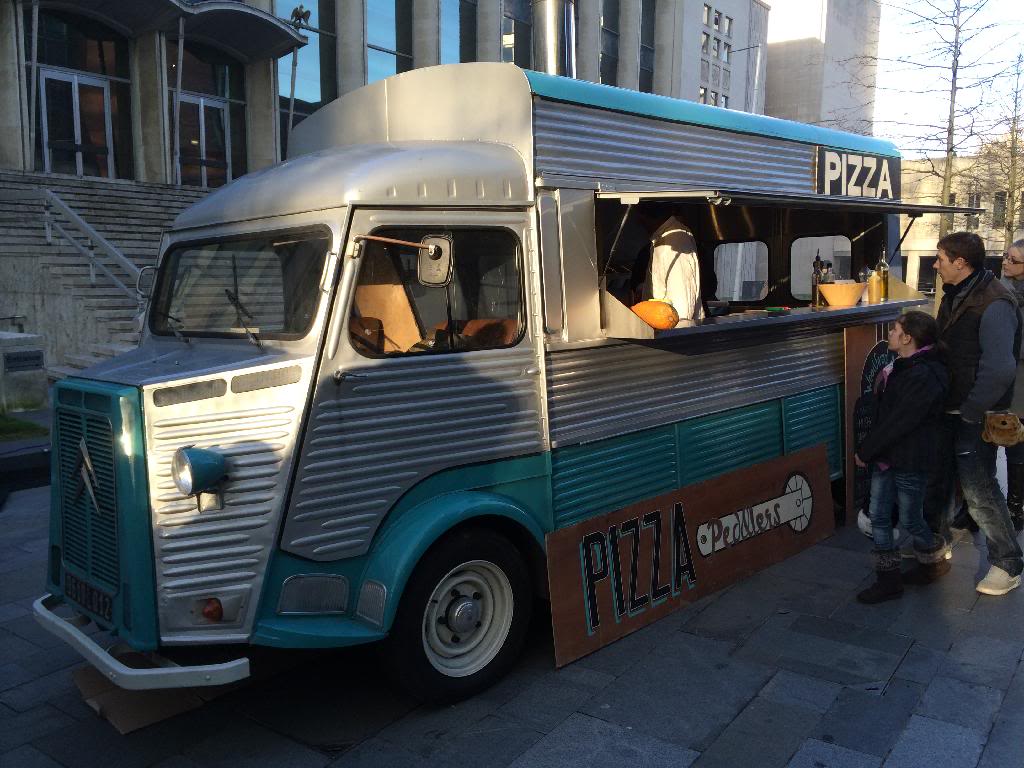 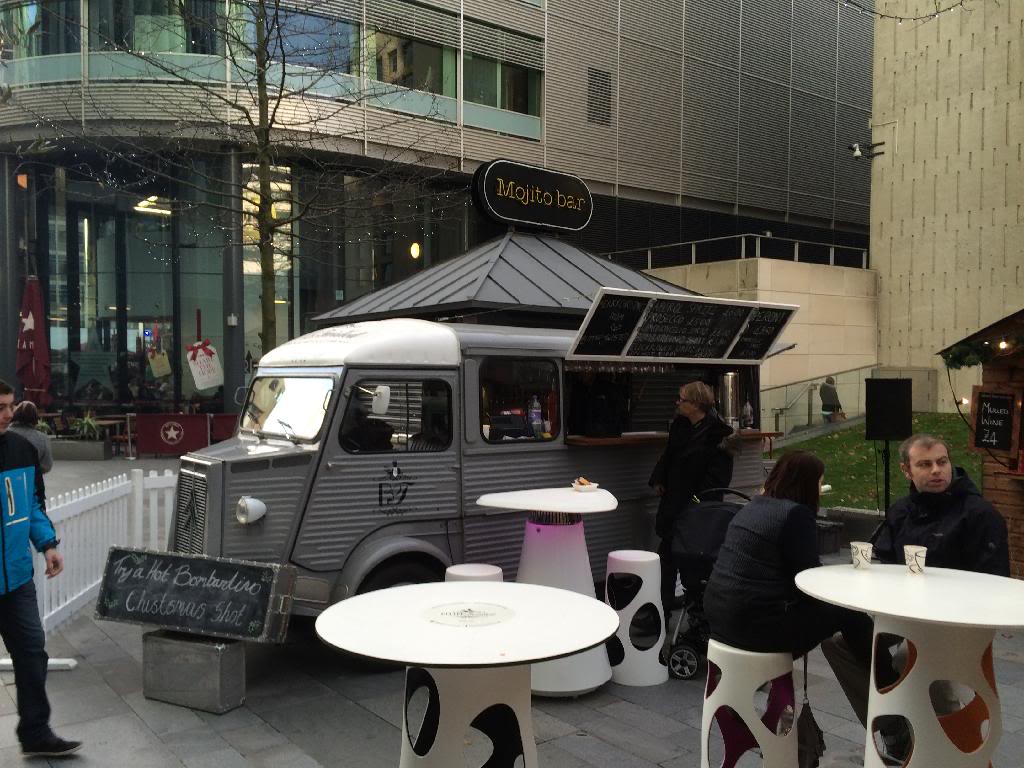 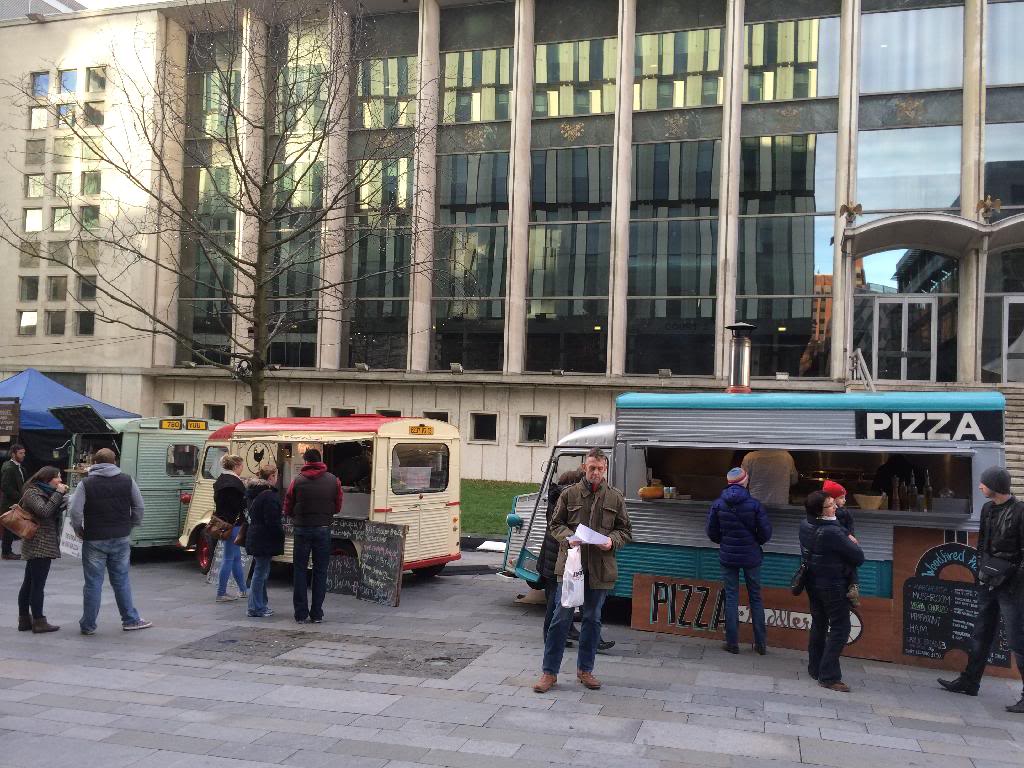 Before we went to Manchester we'd ordered a set of tyres for the 207. We ordered 2 Michelin Pilot Sport 3's for it and they were delivered on Friday afternoon after we'd left. I went out to the workshop today to fit them, removed the shredded Pirelli from the rim, fitted the new Michelin and then stuck it on the balancer. When I spun it the weights it was asking for seemed extreme, 10g on the inside of the rim and 100g on the outer. I had a closer look and there on the edge of the tyre as it was rotating on the machine I could see a flat spot on the wheel.

I wonder if the wheel being bent could have contributed to the way the Pirelli tyre has delaminated?

Handily though it has an alloy spare so I've put the new Michelins on it tonight and it's driving great now. Can't find an alloy spare for it though so have a feeling it's going to get a steel spare until an alloy one comes about as I'm not spending £250 on a spare wheel for it.

I did however notice that whilst I had the engine cover off the rocker cover gasket is leaking though so that's another job on the to do list. I was advised at MOT time that the sump has a slight leak on it too so next time it's due a service I'll get them both done.

Thank that's all for now

Sounds like your 407 Coupe is really quite a car, David. They are certainly an imposing looking car.

H vans are just so lovely. I was delighted to snap up a nice diecast model of one at the NEC. Cost a packet but worth every penny...
Top
Messages: 1861