I could be very tempted y one of those.

I still reckon the 406 coupé is one of the most beautiful cars of all time and to back up my belief I have a model of one on my table.

The only shame is the suspension is a bit dodgy in my humble. If it had hydractive suspension with SC/CAR (Activa) - as it should have had in the guise of the Citroen Activa - it would be nigh-on perfect...

It should never have been a Pug at all

CitroJim wrote:It should never have been a Pug at all

True... It should never have been French!

I read somewhere that it was originally designed to be a baby Ferrari before the 360 was designed.

Apparently Pininfarina presented the design to Ferrari but they knocked it back. It was after it had been rejected by Ferrari that Peugeot got their hands on and made it a 406 Coupè.

In many ways I'm glad Ferrari knocked it back as it made it a very pretty affordable car for a lot of people that wouldn't of been able to afford a Ferrari.

I wonder if it would of sold in much greater numbers if it was Italian?

DHallworth wrote:I wonder if it would of sold in much greater numbers if it was Italian?

Yes, and very possibly worshipped much more that it is as a Pug..

David, that was some very interesting history there - thanks for that

I believe the BX design was another 'reject' that PSA got hold of after being dismissed by British Leyland or was it Volvo?
Top

Christ no , a Bx with a BL engine

Just think, the BX could have been a Maestro

Just think, the BX could have been a Maestro

That would give a very different group of people over on the BX forum, I'm sure! Well, maybe!

I could be very tempted y one of those.

Yea, dad spent ages looking for a V6 manual before he bought this one as most were auto's when he was shopping around.

I could be as well. However I'm hoping the V6 Activa could scratch that itch!

DHallworth wrote: Yea, dad spent ages looking for a V6 manual before he bought this one as most were auto's when he was shopping around.

I could be as well. However I'm hoping the V6 Activa could scratch that itch!

Its paid off by the look of it. They look stunning in bright red but it doesn;t appear to be a common colour for them. The black leather is a great contrast too, I really like that car. It would get my vote over a V6 Xantia!

(not an V6 Activa of course)
Top

Dad's looked at replacing it a couple of times recently.

He's briefly looked at CL600's, and several other Coupe's as well.

He always ends up coming off the net and saying that he can't find anything else that is as good looking as his 406 is and says he's not going to bother changing it.

He's had it since it was 6 months old with a few thousand miles on it, it's now done 80 is thousand miles and it's been superb. Until recently it had only needed one wheel bearing and 2 coils. (this later engine has 6 coils that cost £29 from the dealer and take 10 mins to fit on the front bank and around 40 on the back bank.)

When it was MOT'd this year they found the top loop on one front suspension spring was snapped, it's just had 2 new Brembo calipers on the front when the discs n pads were changed and another wheel bearing.

The calipers on these are 4 piston Brembo calipers. The body of the caliper is aluminium and there's a steel plate that guides the pads. The steel plate is held in place by a steel screw. Unfortunately corrosion has built up between the steel plate and the alloy calliper frame. As the screw holding it on is steel as well it won't come out. The pads wouldn't actually come out of the caliper without being battered by a hammer and the new ones wouldn't go back in. The only other option was to take the edge off the new pads with a file or grinder which we didn't really fancy doing.

Refurbishing the calipers was going to cost more then buying new ones from Peugeot so it ended up with 2 new calipers. Was an annoying expense more then anything as it's a silly design causing the problem. 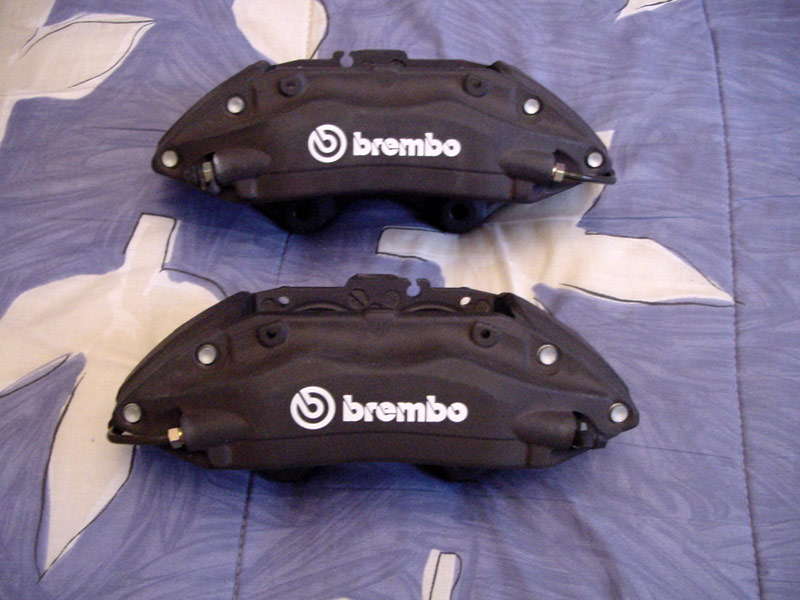 They do look great though through the spokes on the front wheels.

I've now got everything I need for the conversion apart from a gearbox.

Got the clutch, got the flywheel in the post this morning, and got a few other bits and pieces too.

There's a chap selling a gearbox in Newton Le Willows just round the corner from my cousins where I'll be this weekend but he wants £300 for it.

Seeing as they're not selling for around £85 on eBay I'm loathed to pay him that kinda money. The cheaper ones on eBay tend to be collection only and are miles away, the others are pricey with another £70 odd quid on top for a pallet.

I'm wondering if the Activa box will fit the V6 engine... They are the same ML5T boxes so they might... Just need to work out what the difference in ratios is. If the Activa box will give quicker 0 - 60 and a reduced top speed I'll stick with that, if it's a faster top speed but reduced 0 - 60 I'll need to buy a 406 Coupe box.

Shame is that not so long ago I had a V6 block and 2.1TD gearbox here and could have seen if they fit. My gut feeling is they should but it's worth being sure..

Now, I know where said block and gearbox is and perhaps the current custodian might be able to try marrying them up.

If they do fit then you have three options. Use the Activa 'box, use the Activa 'box but put a diesel 5th gear pinion set into give a nice 'overdrive' top or use a diesel gearbox. My feeling is that say, the 2.1TD 'box ratios may not be all that far off a 406 Coupé 'box...

DHallworth wrote:The other option is that this Xantia V6 could provide a lot of spares for people that need them.

Indeed... I was thinking last night.....Simon (Mandrake) has a V6 that's otherwise good with a probably poorly gearbox and unknown cambelt history, David has a V6 he's going to take the engine out of, David has a workshop... 2+2=5

V6 engine out and in, with box change and new cambelt and cam boxes re-seal in a (long!) day? A FCF engineering meet W of Glasgow? I'd be in

It's amazing what scheming you can find going on behind the scenes when you look through the forum properly. Thanks guys.

A few oil changes later and I (touch wood) think I might have rescued the gearbox, or at least prolonged its life... I've done something like 50 miles since the last of 4 oil changes without any trace of the groaning noise I had been chasing for months, even when driving in worst case scenarios. (Fully hot engine and gearbox, wide throttle at low RPM)

Having said that there is still sometimes a bit of a jolt from 2nd to 1st like you describe on the parts V6 you just picked up David, I think Jim's comment of them all doing it a certain degree may be true, particularly the 2nd to 1st downshift in sport mode. Did the auto adaptive reset help at all though ?

There is also still a bit of noisy bearing sound only when pulling under load in 2nd or 3rd at very low rpm around 1200rpm - coming up the final rise into my car park slowly it does it. Could be the torque converter neck bearing a bit worn Jim ? 95% of the time you don't hear it, its only those very specific circumstances where you hear it, so it may be a sign of wear but not necessarily be a sign of impending doom. (I remember my HP14 used to make a similar noise and never gave any trouble)

I'll be following the Activa conversion project with interest, its a real shame they only made manual V6 Activa's in LHD! It would be my ideal car in many ways, apart from fuel consumption.

I love the V6 engine but don't like the automatic gearbox. I sometimes wonder if buying one from Europe and doing a LHD to RHD conversion would be easier...

will definitely have to catch up some time after new year, now that my gearbox seems to be a lot happier I should be able to make the trip without any concerns...(the engine is not performing as well as it should but that's a whole different story)
Top
Messages: 1861