Mandrake wrote:David - where on your Activa exhaust is the hole ?

It's on the stub of pipe that sticks out of the back box. The bit that's flanged to join it to the centre section.

I think I'm going to put it in for a full stainless system when time permits, I should have done it last month when I had a chance... Hey ho.

If you remember, that stub is exactly where it rusted through on mine. I think that's a natural location for condensation to pool, therefore a low mileage infrequently driven car might be prone to rusting there...

Mine had only done 40 miles in the whole year before I bought it and only about 1000 miles a year for the few years before that.

Touch wood the el-cheapo exhaust that we fitted on mine is still going strong.

Still haven't had a chance to do anything with the Activa exhaust yet, I'm off Monday & Tuesday so if I get time I might run it in to the local guys for them to have a look.

I imagine you're looking forward to the CX collection David

Very interested to see your progress with the CX David, that is another great addition to your fleet

Well this morning has started off well, a Xantia V6 I took for MOT has passed without an advisory, the sun is just starting to come out and in about an hours time we're off to recover the CX from Cupar.

Will update with more pictures and tales later on this evening. I just hope that everything goes as well as the day has started off!

Looking forward to hearing all about the CX David!
Top

Continuing on from yesterday mornings post, the day went from good to amazing...

We arrived in Cupar about 2 hours after leaving home as the sat nav decided to take us a weird and wonderful route. However, when we got there the CX was sitting in pride of place in it's garage. It was lovely, it started first time when Andrew turned it over but immediately cut out, I noticed when glancing under the bonnet that the vacuum pipe had come off the fuel pressure regulator, I reattached this and it started and ran beautifully.

Thankfully I'd taken loads of bits of wood of varying thickness so I could break it's approach angle onto the trailer slightly as it is stuck on low at the moment due to a hydraulic leak. Were there for around an hour before we'd got everything loaded and tied down, I was then given a box of stainless steel brake pipes that were bought from Germany for the car, a genuine Citroen workshop manual and a host of other parts. Once we were all done we had a cuppa and a chat about the car.

When I was at our last CCC monthly meet, I was talking to the CCC Scottish Section Secretary. He was at the motor show in Glasgow when he was a kid and had his photograph taken in a CX GTI Turbo 2, it turns out it was this very car! It's got an amazing bit of history to it

Here's just a couple of pictures I took yesterday: 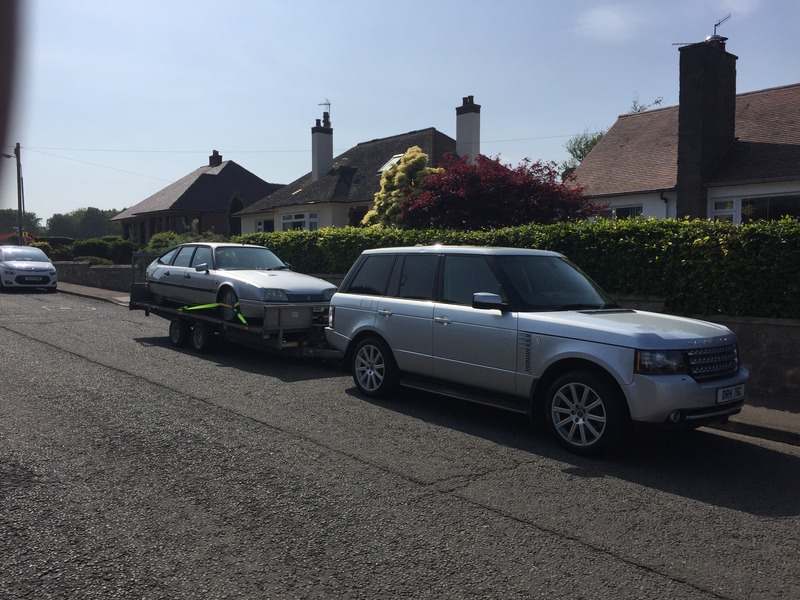 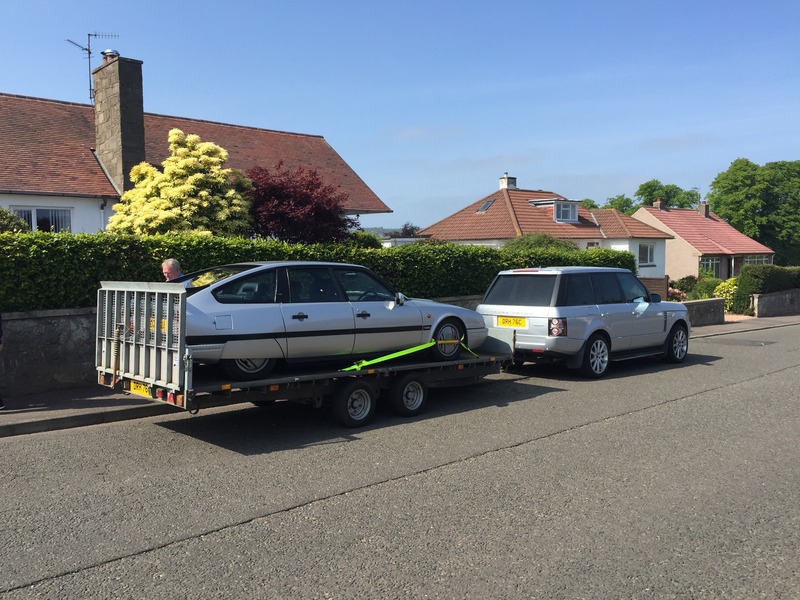 I owe a massive thanks to my dad, again... and to BW a local forum member who put me in touch with the owner of this car for all their help loading a bleeding Citroen onto the trailer

I'll update this as we go. First job for today is to get it off the trailer and onto the ramp so I can get a proper look under it and see where the LHM is leaking from.

Wow! can't wait to read of all your adventures with the CX David. What a lovely car

Sounds like you've found a right Gem there David, can't wait to see it in person!

I can imagine loading it onto the trailer with the suspension right down was challenging as the CX is very low to the ground even when not fully lowered, and has a long pointy snout...

Good thing it fitted on the trailer - looks like it was a bit of a squeeze lengthwise!

I see your Dad poking his head out over the top of the car, what did he think of your latest addition to the collection ?

I put some LHM in the CX tonight and started it up and saw the high pressure leak. Thankfully one end of the pipe was very easy to get at, the other end however, wasn't. Thankfully it only appeared to be one end of the pipe that was a mess. I got it unscrewed from the union without any problems which was surprising, followed the pipe and found the other end of it disappeared up behind the height corrector.

I cut the pipe on a nice straight run and flared it on the car, then used a joining piece and spliced in a new piece of pipe. I then put 2 litres of LHM back into the reservoir and started it up. The STOP light on the dashboard wasn't going out and the suspension wasn't going up. I checked the pressure screw on the regulator and it was loose, I tightened this up and the car went straight up. 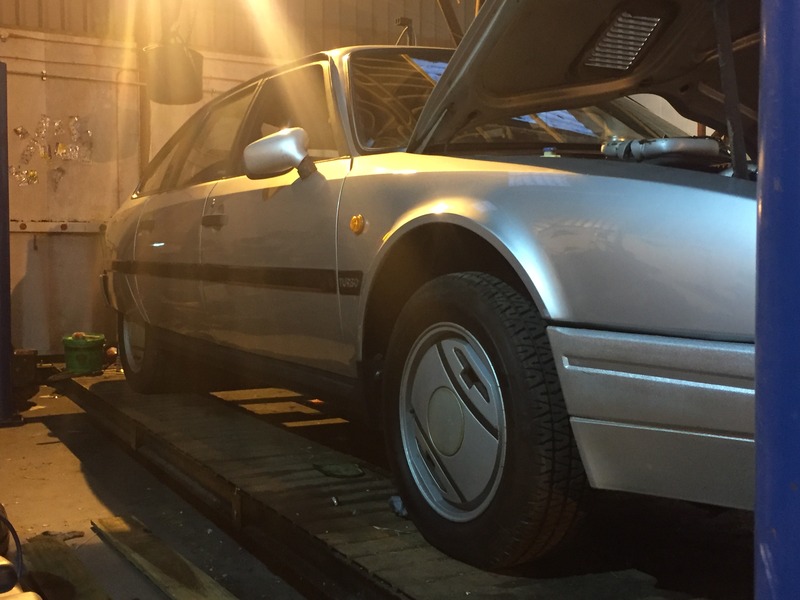 Apparently it's incredibly rare that all of the LCD readouts on the dashboard still work too... 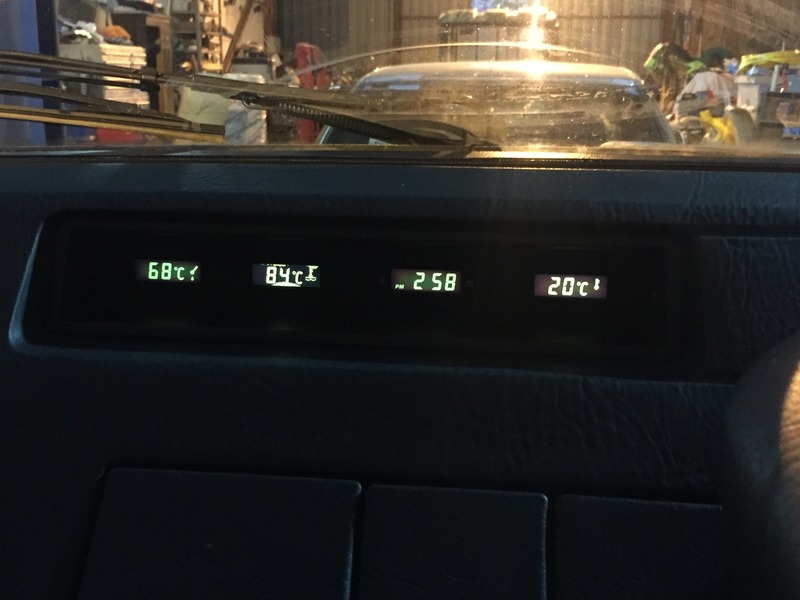 Had the car running for about an hour tonight, most things seem to work, the fan kicks in as and when it should, unfortunately the oil pressure gauge doesn't work. When I pressed the brake pedal there was an LHM leak from the drivers side front brake pipe and there is a leak from one of the rear brake pipes. It sounds like time to fit the box of stainless steel brake pipes that came with the car.

Simon, Dad approves of this one

He had one when I was a kid, albeit a DTR Turbo 2 Safari. The block went porous on his though. He's always had a CX soft spot so is quite keen on this one.

Have done another couple of brake pipes at the rear tonight. There was only one leaking but when you've got a box full of stainless steel ones, it seems rather stupid not to fit them really.

There's a couple of other pipes in the rear on the suspension that have been replaced previously but haven't been done that wonderfully so I'll redo them whilst it's up on the ramp.

I needed to move it off the ramp tonight so I put it back together, started it and as the rear came up the feed pipe to the NS strut burst so that's now been replaced too. Other then a few bad pipes it's remarkably solid underneath.

I'm aiming to have it on the road by July

Some great progress there David.

I was not aware that the Series 2 had all those LCD readouts - very 80's.

My '78 Series 1 had no such things and in fact if memory serves me right it had the GSA style drum speedo and a completely different and very Spartan dashboard and instrument panel design compared to the Series 2. (I've never seen a Series 2 in the flesh only photos)

I would certainly be inspecting every inch of the hydraulic lines that you can see underneath while it's on the hoist, it sounds like there might still be a few ready to fail pipes lurking... It was a relatively common problem as I don't think they were rust protected in any way or even painted! It's a shame to think that its very likely that these rusty pipes are all that put the car off the road for so long, but without a hoist to do the work it would be a complete PITA to replace most of them...

How does the engine sound ? And do you have any idea what miles the clutch has done ?
Top

I've decided that whilst it's in the shed I'm just going to repipe the entire rear end as the pipes don't look wonderful. The front ones look ok though

I haven't a clue how many miles are on the clutch, although when I drove it off the ramp last night though the bite felt nice and low so fingers crossed!

My brother kept getting a soft tyre on the rear left of his 207 GTi, upon looking last night, one of the 17" wheels had cracked. From speaking to Peugeot in Glasgow previously, I believe the GTi wheels are quite prone to this so that's on the ramp today whilst the wheel is welded. There was one that cracked about a year ago and was welded by the same place and it's been fine since so again, fingers crossed!

Once he's finished with the 207 I'll get the CX back on the ramp and continue with the joyous job of repiping it!

I've got an oil filter for it and I'm going to get 6 litres of 15w40 mineral oil for it before the weekend so I can give it a change.