I have no idea where I find the time to work.

The trip over to the X-Rally saw me cover just over 400 miles with an average 44.2mpg, not bad given the fact that there were places were the spoiler was fully deployed and other bit where I crawled along for miles at 50mph

It was, as always good to meet new faces, and a special 'THANK YOU' to James (HellRazor5543) for supplying me with a replacement brake light bulb after Chris (Citroenmad) noticed it wasn't working as he followed me down to Burghley House.

I got approached a couple of times for photo shoots of the C6, one on it's own and one with James Walshes Cx and an XM ( I know not who's) so that was good.

I was going to disappear when Vince turned off the M62 but decided that it might be etter to follow him home, given that there are a couple of roundabouts and sets of lights, but he made it home safely, so all's well in the end.
Top

Hello Steve, and I am glad I could help with the bulb. I enjoyed myself at X Rally, and I hope to be at others.
Top

I was exceedingly happy Vince made it home OK Steve

Trainman wrote: Following Vince home wasn't helped by the amount of 'stunt' driving on the A1 where coaches were pulling into gap's only big enough for a C1

I notice nearly every time I travel any distance at weekends how the standard of driving falls noticeably compared to that of weekdays..

Coaches are possibly the worst offenders for outright bad driving and inconsideration. Lorry drivers get a bad rap but against coach drivers they're positively angelic.. And why aren't coaches limited to 56 mph like lorries? After all they're only lorries with seats.

Apologies if there's hundreds of coach drivers on here now spitting rage but I have to say boys, sorry but the above is what I find.

I'll be dammed if I ever ride on one.
Top

It all seemed the norm to me.

The way over however was fraught with idiotic drivers, but that was on the top roads over the moors.....the impatience of some people is ridiculous.....so impatient that they are willing to risk their lives and others just to arrive at the next junction 30 seconds ahead of when it would normally have been

Funny thing was on the subject of other drivers.....as i was driving down towards melton mowbray, i got to musing about the hundreds of people who get in their cars each day, do nothing but turn the key and get on the road. The people who never service their cars, wouldnt know how to check a tyre pressure or oil level, gaffer tape up bits hanging off etc, you know the type.....and how you almost never seem to see them broken down....they only seem to get caught out at MOT time when they do the bare minimum to keep their junk boxes on the road.

I was feeling quite proud that i look after my cars, pour time and attention into them to keep them as tip top as i can and was enjoying the drive in my clean and tidy car.....and then i broke down !

Its just like speeding and bad drivers...its always the good guys who cop it and the offenders seem to get off scott free

Trainman wrote: Following Vince home wasn't helped by the amount of 'stunt' driving on the A1 where coaches were pulling into gap's only big enough for a C1

I notice nearly every time I travel any distance at weekends how the standard of driving falls noticeably compared to that of weekdays..

Coaches are possibly the worst offenders for outright bad driving and inconsideration. Lorry drivers get a bad rap but against coach drivers they're positively angelic.. And why aren't coaches limited to 56 mph like lorries? After all they're only lorries with seats.

Apologies if there's hundreds of coach drivers on here now spitting rage but I have to say boys, sorry but the above is what I find.

I'll be dammed if I ever ride on one.

As with all generalisations there are exceptions. As a bus/coach driver I know that a lot of them are bad and think they own the road. They say when you are learning to drive them not to use the size of the vehicle to an advantage, but that is precisely what a lot of them do. I will let you off Jim it's your opinion and you are entitled to it. I have the same opinion about bmw drivers, in particular 3 series, and i dare say there is one or two who are decent. You should never say never, one day you mite be broken down and it could be a coach that stops and helps ( highly unlikely)

I agree and it's not just coach drivers, i do about 20,000 miles a year in the C6 and frequently have to battle my onto a motorway because some wagon driver won't allow me onto the motorway, despite there being nothing else around. That really does pee me off

As for people stopping to help, or not.... I think that's the saddest part of society. as a few of us 'slightly elder' chaps may remember, thare was a time when you wouldn't think twice to stop and help somebody that had broken down, now there's a whole host of questions that run through your mind.....

a sign of the times? or protecting yourself?
Top

Davie, I knew there's be at least one coach driver on here and indeed there are exceptions just as there is in everything...

It's not just coaches I won't travel on. I don't ride on any public transport at all under any circumstances except trains. They're the only form of transport I can juts about manage and for a long time I was unable to ride a Virgin Pendolino.. I'm not even very happy being a passenger in a car unless I know and trust the driver absolutely...

I know it's not normal and it's doubtless a condition that ends in 'ia' but there we go... It's either walk or train for me..

In fact due to my inability to ride on public transport I've not ridden a coach, bus or taxi for at least twenty years and not flown for 12 years. That's definitely something I'll never do again.

The last road-going vehicle I rode passenger in that was not a car was a breakdown recovery lorry about three years ago when my V6 Xantia popped an ignition coil...

I'd always try to help someone obviously in distress and have on many occasions but do agree it does need to be done with some care and that's very sad...
Top

I forgot to post one of the pictures from the Photo shoot with James Walshe's CX, my C6 and the XM 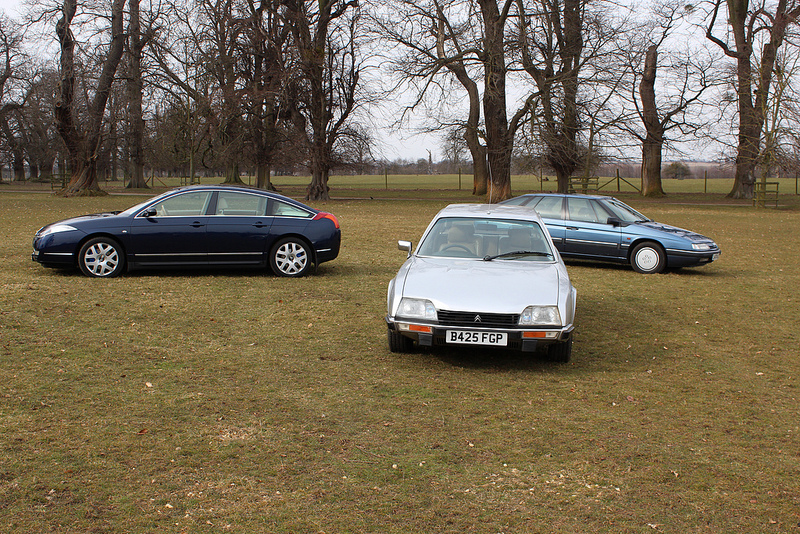 I'm a bit like you really jim, if the car was broken I would not go anywhere. I don't go on other buses other than the one I am driving, and now it's only a transit, and thats if i ever drive one again. I don't know if i'll get back to work to be honest, thats 9 months off now. I'm 50 in 3 months, due a medical and in current condition would not pass. I'm also yery wary of others driving me and usually sit in back, just not comfortable sitting next to the driver. trains don't bother me but what can you do when nearest train station 20 miles away? So it would be no car, no outings, as simple as that. It is a poor sign of the times, people are scared to help others, it could be a trap for robbing or raping, either that or people nowadays are in too much of a hurry and too selfish to think of others. The me first brigade really annoys me.

Steve, I would love a c6. Their becoming cheaper now, but not cheap enough for me tho. The thing that would bug me would be the road tax. I just bought the yax for the c4 today, i flinched at the £145 for 6 months. I was only £20 for the 107! I moved a c6 at work last year, must have been all of 200 yards but didn't want to get out of it!

Strange about the bad driving, only saw two examples on Sunday - one was a woman who was intent on staking in the middle lane in a Micra, at 45mph, for miles and miles and miles..

The other was just after I left home, about ten miles down the road there were a dozen or more police cars, some on my carriageway but mainly the northbound, also ambulances and fire engines and a black Range Rover missing its front wheels and laid on its side.

Somewhere there was a Punto, apparently. Driven by one of my son's colleagues whom he will never see again.
Top

Now look at the cars in my signature....
Top

CitroJim wrote:And there's a good reason why I never go for a spin in a C6...

Now look at the cars in my signature....

I remember that you nearly went for a spin in a CX Prestige that time, Jim...

CitroJim wrote:And there's a good reason why I never go for a spin in a C6...

Now look at the cars in my signature....

I'd of thought it was more to do with the horror stories you heard at BL Auto's rather then the risk of buying one Jim!
Top
Messages: 960