Well, it's been a busy month, what with one thing and another, No major issues with the car, except an odd squeal from the brakes, when I'm driving along it's fine, but as soon as I put a bit of turn on the steering wheel I get the squeal. Apply the brakes softly and it goes away. I've read somewhere the one of the pistons in the calipers could be twisted

also discovered that every now and then there is a 'clunk' from the brakes like a piston suddenly shooting out.

Can't wait for that conversation

so I need to sort that out, otherwise great to see people and put names to faces on Saturday at Wetherby.
Top

Another busy month, need to arrange the MOT for later this month before it runs out of warrenty (Just to be on the safe side). I've got a squeal on the brakes which needs checking out, I think it's a loose pad, as it only happens when you bear/turn left. turning right is fine......

Met up with a fellow C6'er yesterday in Southport, where we managed to stop traffic.

That reminds me must post the convoy stuff on the C6 Owners forum, that really could be quite a sight. 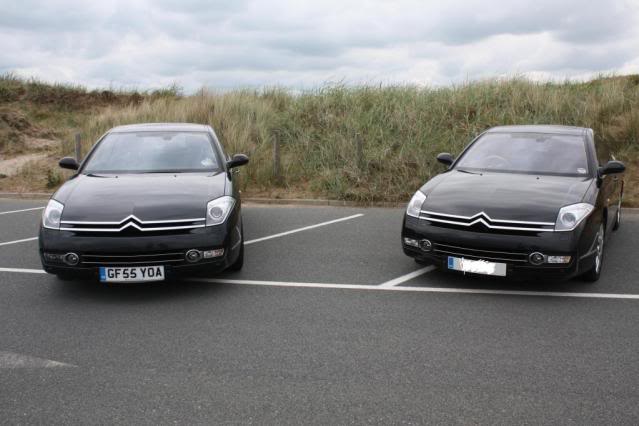 A couple of guys wanting to talk about our car's came screaming into the car park to have a nosy. They were most impressed to see not one, but 2 C6's together. (Mine on the left

). It was given a good wash and wax yesterday morning, although I still need to get the boot lid scratch sorted out (need to ring someone about that)

Is the other one black or the same colour as yours?

There is a C6 owners forum? I didnt know that, might have to have a little look on there.

One day .... though I do feel when that day comes there wont be enough C6s to go around, as a lot of people seem to like them and say they will have one when prices drop even more. Though with possible demand like that they might not.

Yeah It's Black, and also an exclusive

The website below, is full of information relating those that already have, and those that would like to own a C6.

Trainman wrote:Yeah It's Black, and also an exclusive

THE one to have!

Trainman wrote:The website below, is full of information relating those that already have, and those that would like to own a C6.

Yeah, ive had a quick look on there, seems a very good forum.

They obviously have a following, im surprised to see a C6 owners forum already. Mind, im always amased there isnt a Xantia forum too, though i guess this is more Xantia that others.
Top

There's also an amazing amount of technical information on there

Love the pics and the updates on the C6.

Think a V6 with LPG will be the only way to go but they are so super rare they make V6 xantia and activas look mass produced...

Do you often take cattle carriages into europe thru the chunnel at all or do you stay in the UK?
Top

Will, Just like the C6, FIRST CLASS all the way

perks of the job

Okay been a while since the last update, Took the car to the local steelers for MOT, "method in madness"

It's still covered by warrenty, so I thought take it there, anything wrong it can be fixed.

Me and my big mouth

BUT they found a small leak on the NSF suspension leg, no problem, me thinks, covered under warrenty, not quite so......... If the car had done less than 36,000 miles, then yes, no problem, it's actually done nearly double that

which I did, they say that the leg is not covered, but they may do it as a 'good will gesture', however they need to be approached by the dealer.

Going to speak with the local warrenty man tomorrow and see what happens from there.

Thats not good news, they awill be expensive i would think? Have you priced one yet?

I was talking to someone from the C6 forum the other day, seemed like a nice chap. Might of been the person who runs it actually. Hopefully in years to come ill be able to join myself

Citroenmad wrote:Thats not good news, they awill be expensive i would think? Have you priced one yet?

In a word NO, I'm not sure I want to know the price just yet

Citroenmad wrote: I was talking to someone from the C6 forum the other day, seemed like a nice chap. Might of been the person who runs it actually.

Yes, possibly, i dont think i got his name. Im sure he said he set up the C4 and C6 forums. He came over to have a look at the traction at a classic car event i was at last weekend.
Top

Citroenmad wrote:Yes, possibly, i dont think i got his name. Im sure he said he set up the C4 and C6 forums. He came over to have a look at the traction at a classic car event i was at last weekend.

Yeah, That's the chap, he said he was at GFOS, I believe he was going to look at a Traction the other day, not sure how he went on though.
Top
Messages: 960