I enjoyed reading it Steve. I like your style of writing

red_dwarfers wrote:I enjoyed reading it Steve. I like your style of writing

Thanks Kev. It is appreciated.
Top

A cracking weekend at Beaulieu for their first Simply French event, I had to drop some stuff off in Luton on the way down, then I called into BL Auto's in Welwyn Garden City for a brew and a chat.

I was introduced to Barry the owner, another throughly pleasant chap, who garage contained a raft of SM's in various stages of repair and refurbishment, they were in the company of a D, a CX and sparkling red C6.

After my brew it was straight down to Beaulieu, on arriving I was the only one there....... OK (I think to myself) Talking to the lovely lady on the gate she tells me that the ground is a bit wet, but should dry out, I wasn't so sure, so a call to my mate and I end up in a B&B for the 2 nights.

Yesterday saw a bright and sunny day, so much so I got sunburnt. headache!! a shed load of cars turned up along with 4 other C6's. one who came and went before I could talk to him.

I set off back this morning about 8:45 and got home about 13:30 a nice steady run, M3, A34, M40, M6 a couple of stop's along the way as nature and coffee required. a round trip of 741 miles, I forgot to take a picture of the trip computer on the way down but here's one from the way back 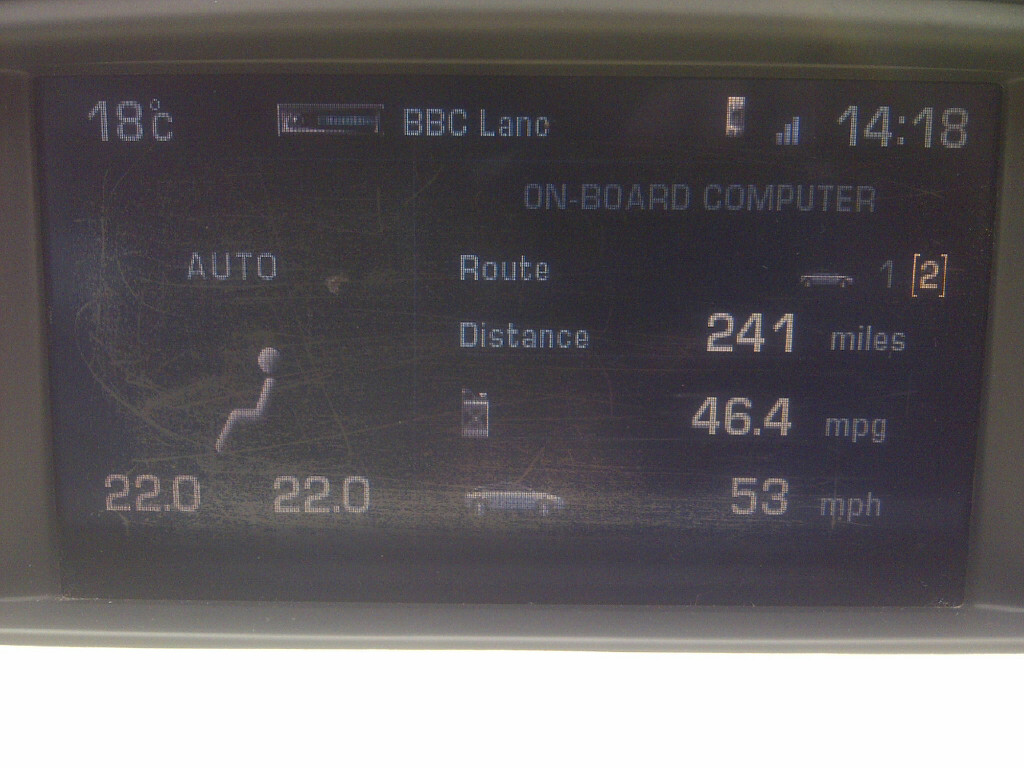 it was 47.1 when I came off the M6 but went down driving through Leyland.
Top

Yep the column was spot on steve but like Jim im not too sure about the mugshot, looks nothing like you................somehow.

Yes a very good column Steve, you do need a better picture though!

What is phenomenal is the punch that motor also puts out...its amazing to drive yet returns silly mpg's too.....so much car for the money and so capable

I dont get the Citroenian anymore

as i need to renew my membership....i might aswell do it when im up and running in the XM.....i will need some club stickers for it anyway...then i can read your column

Chris, Dean, The picture isn't good, but I detest having to stand there having my picture taken, it's worse than having a needle or going to the dentist.........

Vince, don't worry about it, I've got the last 5 or 6 for you to be having a look at, that should keep you quiet for 5 minutes

I'll fetch them with me on Friday (if I remember

The C6 is exactl what it says on the tin, a big luxury cruiser, I average 32.9 over my normal mix of daily driving at distances of between 5,000 and 10,000 miles according to the tripometer, 47.1 is the best yet for the motorway, I think it could have been more but the roadworks around Birmingham really were horrible, down to 8mph in a couple of places

but mpg around town, I don't want to know (shudders). The other thing to note is that the average speed was higher, but again hamperred by roadworks.

All in all, I'm 'Chuffed' with the performance, 741 mile round trip and the only other C6's I saw were the ones at Beaulieu

Trainman wrote: All in all, I'm 'Chuffed' with the performance, 741 mile round trip and the only other C6's I saw were the ones at Beaulieu

I see a few around here, last week I saw a nice red one on the motorway and yesterday I spotted a black 57 plate with mudflaps. It was very clean and shiny, think the number plate ended in KOB.
Top

but mpg around town, I don't want to know (shudders).

Thats just the way dervs are though, they dont give much better mpg than petrol shuffling around town but get them ploughing the motorways and the economy can be amazing, to be fair given the size of the car, the auto, and the performance it has to be getting high 40's on a run is brilliant from such a vehicle, i really do like these C6's, good ones are still hovering around 10k though and i certainly couldnt have one now but if i time it right i may be in position to have one when its 15 years old and i would, i think they are just a stunning looking car and rather nice to drive too.

You need somone with a telephoto lense to catch you at a club meet and get a decent picture, im not a fan of pictures either so i see where your coming from.

I hate having my picture taken too but the one of me in the Citroenian is one of the better efforts in my opinion. I look almost normal in that one...
Top

CitroJim wrote:I hate having my picture taken too but the one of me in the Citroenian is one of the better efforts in my opinion. I look almost normal in that one...


Hmmmm I think the juries still out on that

I think I'm just going to get a friend of mine to take some random shot's, there's a family party this weekend, so a good chance she can deliver, it's either that or photshop............
Top

A long day for me today, in fact it's been a long week, Beaulieu at the weekend and then this morning over to deepest and darkest Welsh Wales and right into the midst of that little island just off the mainland. I left home about 6:45 this morning, and picked Vince up at the pre-arranged 7:30 and off we set, We got to Paul's about 10:00ish.

Slightly intresting point with the Satnav is that it shows Wales as a seperate country on the RT4, yet doesn't show Scotland as one

weird but that's the Celt's for you

I can't remeber the mileage from to day or the consumption, and I'm still at work until Midnight so I'll take a pic and post that tomorrow.

I was really good to see Paul and spend a bit of time with him and Vince, just wish I would have had more..... but the Devil drives.... and all that......

Coming back was pretty straight forward as well, apart from nearly getting taken out by a truck who decided to pull out as I was overtaking

and just for once the 'Plod' were behind me......... I would have loved to be fly on the wall at that conversation

dont loose a second C6 for gods sake Steve, at least it was an 'almost'!!

Deanxm wrote:dont loose a second C6 for gods sake Steve, at least it was an 'almost'!! D

I have no intention of buddy, but

it was a brown underpants moment

Deanxm wrote:dont loose a second C6 for gods sake Steve, at least it was an 'almost'!! D

I have no intention of buddy, but

it was a brown underpants moment

ooooohhhh nnnooooooo not all over that cream leather.. that would be s@@*....