Took the Xantia, myself and the other half for a weekend away last weekend.
Off we went to the local garage and i put £70 worth of diesel in the car, (Paramedics didn't take long to get to me and treat me for shock ).

Monday we had to head home later in the day but only after some theraputic shopping, so the Mrs says. When we came out of Trago Mills..The Xantia had a flat tyre.

This was not the only incident we had over the enjoyable weekend but only this one was car related, well apart from the parking ticket that is..

When changing the wheel i noticed i need to fit new rear brake pads.
Went to the local tyre services today and had 3 new tyres fitted, 1 puncture repair. all fitted for £120.. Good price. Ok they are only budget tyres but my name is not Lewis Hamilton so plodding around suits me.

I took the chance when in the tyre services to examing the front brake pads.. Happy days, they need changing too along with a nearside cv gaitor.

But in saying that the Xantia did a 465 round trip without a hitch. so nearly 700 miles in less than 10 days if i include our day out the week before.
A good trip but one of the strangest, maddest incident related weekends away i have ever had. But still enjoyed every second.

Have not decided where we will go this week yet but off we shall go while i have the time off work..

I am so glad i bought another Citroen as the comfort was enjoyed once again on one of our away day weekends..
Top

Check those rear pads again russ. Take special attention to how they have worn. If theres a bit of friction left and its worn at an angle then your calipers are desperate to be removed and the alloy corrosion between the caliper and rear arm taken away... Then resaemble the calipers to the arm with grease between them to help prolong the corrosion again....

If the calipers are at an angle go easy removing the caliper bolts they can snap easilly!!!!!

Ok thanks Paul.
I did only have a quick look but they did look as if they had worn even but before i attempt the job i shall take note and be careful..I wont be attempting doing them unti Easter to be honest as i have many other things to do in my limited time off.

They are not really desperate to be changed yet, i have to prioritise my jobs between home and the car and of course get some relaxation in to the frame too..

I shall make this reply short as i can hear a beer calling my name from the fridge..

Xantic wrote:, i have to prioritise my jobs between home and the car and of course get some relaxation in to the frame too..

It was time to spend a little time on the Xantia after the last 4 weeks of going here there and everywhere i decided to fit new front and rear brake pads and if i had enough time change the oil and filter.

No time this week for the oil and filter having run out of time and possibly only just escaping an ASBO served on me.

Lets start with the rear pads.
Ok they were worn uneven, on the poutside the pad had virtualy gone but the inside had a fair bit of life on it. Same on both sides but new ones fitted and easy to do i must say.
I know it will require more attention as Paul said about the corrosion getting in between the calipers but for now they will have to do.

The front pads
This is where i could have had an anti social behaviour order served on me..lol
Language was colourful but quiet, only the other half heard it when i went indoors for a break, before i broke something outside i thought that might be best.
Now i know there are a few of you very handy with the tools and probably say, Doing the front brakes are a doddle. First of all they did not want to come out, unlike some cars they fall out almost but these took some pulling pushing banging etc but did come out eventualy.

Fitting the new ones was not so easy as they are a tight fit but 1 wheel done, on to the other. Gasp.!!

This is where everything went wrong.The volume of my muttering was getting louder along with some choice words. Now i regard myself pretty calm as bieng a lgv driver i tend to let things go over my head or my blood pressure would be at boiling point.

Well boiling point was reached when fitting a new brake pad. give it a gentle tap in place when to my horror, well see the photo it tells all.

To cut a long story short i had to fit one of the old pads until i can get to the shop to gently put the broken brake pad where the sun don't shine of the assistant of the shop in question.

I think i shall have an extra beer tonight..
Try not to laugh everyone, although i wont hold it against you as i do see the funny side of it myself..Photo below not one of my best..lol 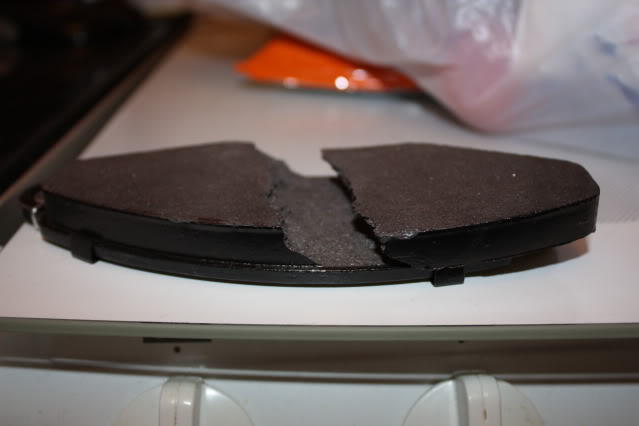 Some welting of the hammer to get the pin driven out is ther extent of the
hostilities normally. Not so much a 5minute job as a half hour one!!

Guessing from the picture here but looks very much not the right fitment.
What are those x2 lugs on the lower edge for example? That counter man
is going to have a new odd limp in his walk on Tuesday then? The pads
NEVER need anything more than a light finger wobble to remove the ears
securing them out of the caliper housing.

Andrew, the lugs are of the anti-rattle shim that some pads have fitted to them.
Top

The 2 lugs are holding the thin mjetal plate to the back of the pads. like an anti rattle shim thing..If you know what i mean.. I'm not very good at explaining things.

I matched the pads to the old ones, they are correct, identical in fact, well they were..lol

The parts shop said there was 2 types listed so i bought 2 fronts and 2 backs to make sure. Of course i shall be taking back the ones i never used along with the broken pad.

They were so so tight to get out and to put in.. A bit like getting money out of my wallet..lol
Top

When you fit the new pads - after removing the old pads CLEAN out the curved orface top AND bottom that the pad Lugs sit in... a lot of s**t sits in there and HELPS hold the pads on the disks... The spring "clip" can sit at the top or bottom..

I did give it a clean Paul but it was still a tight fit..It was my first attempt at the Xantia brake pads..I have done easier i must admit, perhaps i was not in the right frame of mind at the time.

Only a few more jobs to do before holidays, unless i can win the lottery..
Rear spheres
LHM change.
Oil change
Note to myself.
Next time buy a car thats already had these things done..
Top

There's ALWAYS something that needs doing on ANY recent purchase,
even if it's a new tyre or a peace-of-mind-it's-been-done brake pads
or oil/filter change. Unless you really want to pay over the odds and take
on trust these critical things have allegedly been done and the service
history file isn't a whole load of Jackanory.

You are right Andrew.
So far i have had 3 new tyres, done the brakes, a couple of bulbs etc.
And the car has taken us on various trips to the extent of nearly 2k miles in the last 4 weeks.

She will be going for a run tomorrow up to Bourton on the water and surronding area.
This is why i did the brakes, When i had tyres fitted i noticed they needed doing it was just time to do them.

I spend so much time in work i usually only get 1 day to myself to relax.
Top

Xantic wrote: Next time buy a car thats already had these things done..

Buy it from ME then

As for REAR spheres, I hope you wont do them in a way that the car I had off you were done.. the rear cylinders have been twisted... ill need to sort that some time soon..

ALWAYS remember to put the car in HIGH first to slacken the rears only. And slacken them by half a turn only... then lower and depressureise the car to undo them after...

Mind you - that Exclusive I had from you I stuck a Water pump, cam belt, and bottom pully on her, did an oil and filter change and fitted a regulator sphere as it was desperate and done NOTHING else... except 18k ALREADY without an ounch of a problem!

A Citroen indy did them rear spheres when i had the car along with the front ones.

I WILL be buying from you next time i think Paul
Keep me in mind when ever you are selling a good Xantia.
At least the work would have been done and done tidy and all i have to do is put fuel in it and enjoy the ride..lol
Top
Messages: 98