I haven't heard Jim. I will see if I can find out, but then of those that are left there are a few unoriginal or fake ones.
Top

All Mi16s are basically unoriginal and fake Davie as they are all conversions, like RHD V6 Activas....

The main donor for the engine was the BX GTi 16v (the famous 'Valver') and now they're as rare as the proverbial and now very much cherished donor engines are very hard to find..

Newer Mi16s were made with the iron blocked XU9J4RS engine and they ere more plentiful, occurring in many PSA vehicles...
Top

I was thinking about the mid engined one! The engine from a xsara vts or 306 gti are popular in them.
Top

daviemck2006 wrote:I was thinking about the mid engined one!

One of the mental group B ones wasn't it? Along with such things as the Metro 6R4 and so on..
Top

Talking of the Metro 6R4, what other high performance car used the same engine? It did not use the same gearbox though.
Top

I thought it was a special, just for the 6R4 James?
Top

I believe that the Jaguar XJ220 also used that engine, but (as the gearing needed was dramatically different) not the same gearbox. I could be wrong (Wikipedia suggests I am).
Top

And of course Wikipedia is the absolute truth in everything....

davetherave wrote:So I wasn't sure If I had updated here or not but earlier this year I realised that I needed a car that worked and that perhaps the Xm was not going to live up to that task. I am sorry to say that I had to buy a newer more sensible car..... 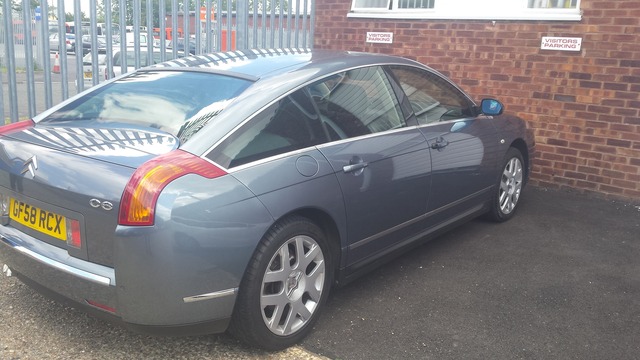 Obviously I didn't and now have a C6.

I went a good few months with an awful suspension that made me hate the car, replaced various bits before finding (As I had first thought) that it was a duff rear sphere. She now rides very nicely!

The wife does feel that I may have been economical with the truth when I said it would be less maintenance than the XM as its already been off to the dealers for a few things including a new EGR valve!

I have not been on here much as I am again at Uni in my spare time, this means the Xm is pretty much in the same position as it is in the pictures above- I keep promising the wife I will get rid of it but cant quite bring myself to do it!

Glad you got your C6 suspension working correctly and that it was as simple as replacing spheres.
Hope you told the chaps at Duff Morgan who reckoned that spheres never need replacing.
Maybe see you and your C6 at a rally in 2016, it'll not be long until the X-rally in April.
Top

Hell Razor5543 wrote:I believe that the Jaguar XJ220 also used that engine, but (as the gearing needed was dramatically different) not the same gearbox. I could be wrong (Wikipedia suggests I am).

The XJ220 engine was developed from the 6R4, but they shared few, if any, components. I have seen both (or at least parts of) dismantled, side by side, and the 6R4 had rather rough looking sand-cast components and everything was hand machined. The XJ220 components were much more like production items.

The engines I saw had been 'rescued' on the way from TWR to the scrap dealer.
Top

Overdue an update again it seems.

Firstly- Happy new year to all.
Much has happened since my last update, currently part way through an MSc course which is taking up lots of time, meaning no progress on the Cx as yet.

The C6 over the past year has been excellent though costly requiring expensive visits to the dealer.
I had the frips, balljoints, rear ABS sensor, Coolant pipe, arm bushes and much more replaced over the course of the year!

I attended the ICCCR in Holland, which was an excellent event with some fantastic cars and a few familiar faces. I was a passenger in one of Mathew Thomas's LHD v6 cars which performed well throughout requiring only a small push onto the ferry on the way back as it did not want to leave! I even got to drive it on the route back which made me miss my old Xm even more, though Mathews was a few shades more rapid than my old TD.

Unfortunately whilst on the way to Gatwick airport in November an inconsiderate chap in a small Hyundai decided that he would play spin the car when he ran out of slip road and hit a lorry subsequently spinning into the 4th lane which I was traveling in, a van swiftly rear ended me after I hit Hyundai man.

The C6 was a write off and after much negotiation I got the money out of the insurance company, though no-where near what I paid for it.
Hopefully will not increase insurance premiums as its a non fault accident. Did miss the flight though which was somewhat irritating and Hyundai chap was lucky enough to be able to drive off and catch his flight

With much pressure to get a sensible car as relying on my bicycle for a 19 mile round trip commute all winter is less than ideal, I have naturally decided I need an Xm again.
As much as I loved the c6 and miss mine, I cannot justify spending half the value (conservative estimate) of the car each year in repairs. I may venture back to a c6 if one came up at the right price.

I figure that at least with an Xm I have many of the parts that may be required in my garage!

Fingers crossed for the next update I will have a working Citroen again!
Top

This be of interest?

The estates have never really been my thing. Think I will be looking at the cheaper end of the market for a hatchback!
Top

davetherave wrote:The estates have never really been my thing. Think I will be looking at the cheaper end of the market for a hatchback!

Dave, I'm bit disappointed......I thought you might have contributed to "What do you know about Norfolk?" thread I started on the flimsy basis that it may, attract a few posts from FCF members from Norfolk. Ulterior motive in this of course...once drawn into the net, they would then be susceptible to being infected with my "FCF AA box Challenge 2017", obsession and finally the AA Box at Brancaster could be ticked off the list, with an original photo,and an approriate vehicle parked next to it

Only joking of course but you may find some interest in these threads if you haven't already come across them!

What do you know abot Norfolk?

Dave, great to see you on here again and sorry to hear about the fate of the C6

I bike commute, unless the rain is very heavy, but do have cars in reserve! My commute is not quite as long as yours though...

How about another Xantia?