Thats one of the big problems, Space is an issue.
Its currently residing in my garage where the cx usully goes due to its sieve like roof.
The bodywork isnt great, but I cant see any obvious rust. Guess ill have to have to get it up on ramps and check out the condition underneath.
Top

Well I have not really done much more than look at the xm estate as ive been busy on the Xm.

Most of the day has been spent getting its wheels back on the ground, and succesfully too!

ITs been a lot of work, but it now has new:
Droplinks
Track rod ends
Balljoints
Steering ram bush
Steering ram gaitor

She should have a good ride now!

had to buy a bolt removal tool to remove a union that had corroded.
It worked like magic!

Its mot is on tuesday, just need to refill gearbox oil as a lot came out when i removed the drive shaft.

Fingers crossed it doesnt leak and passes the mot!

Cx i think will need work next as its over revving randomly. Think the pump may be dying quicker than i thought- or it could just be air.
Anyways i need to find a spare and buid it up with viton seals.

And Xm estate is on the back burner for now!
Top

Well I had the MOT today at duff morgan.
As usual it failed.
9 failures this time
One of the main ones is the steering ram i have spent so long on is leaking still

Having sat and watched it, i belives the ram its self is in medical terms buggered.

Sat under the car and saw a leak coming from a join on the ram body, so if anyone has a spare non leaky one.....

Im going on holiday next week and that happens to be when the mot runs out, so i am making a two piece bodge undertray.... If the mot tester cant see a leak then there isnt one.

They have also decided that in the space of a year my brake hoses have become excessivly corroded.

But the wierdest one is the nearside track rod end loose, which from my observation it isnt... yet he has put his chalke on the driveshaft

Hopefully it will pass on thursday, if not ill be out the country and it risks being crushed.. maybe not such a bad thing anyway.
Top

Thankfully, the Xm did just pass before I went on holiday, it only took three fails!
I managed to get a ram from a place in norwich, as the Xm ones are the same as the Xantia rams. -Usefull to know!

Got back from Turkey late yesterday evening.
The faithfull beast that is the Cx took us to gatwick on vegetable oil

, sadly it has a little fuel leak, so ill be adding getting the fuel pump rebuilt to the list of things to do.

I didnt want to take the Xm as there is a nasty squeeking noise coming from the belts area in the engine bay so im going to have to investigate that before using it. I dont have any ideas yet, but dont think it will be from the timing area as thats all new.

A plus point is that on the way back from the MOT station i noticed the front suspension that i did all the work on is much improved! no rattling over bumps any more!
Top

A good time in Turkey I hope. I'm going to give the meat related quips a miss...

Just think of all that knowledge you're gaining with all these little issues!
After stripping down the belt section today on the XM, access is just as good as the Xantia if not better (In my case. The flip side of not having an air conditioned XM I guess!). Mine was squealing terrible for the first few minutes of running but I've found that the aux belt is loose so just needs tightening up on the manual tensioner.
In the XM BoL I did see that on the tensioner front, its the same case as the Xantias, having an auto tensioner setup if air con is fitted and a manual one for no air con. As our late 1.9s are laid out like the 2.1 I'm guessing that the auto tensioner setup is going to be very similar so I wonder if its that infamous spring? 30 second job to check the spring action with a square drive socket bar thingy.
Top I think i found out why my battery is dying after a day or two!, I think my front electrovalve is sticking on.

Guess ill have to whip it off and find a replacement, or perhaps its the ECU.

davetherave wrote:I think i found out why my battery is dying after a day or two!, I think my front electrovalve is sticking on.

Guess ill have to whip it off and find a replacement, or perhaps its the ECU.

if the front electrovalve is sticking on it won't be the electrovalves fault its receiving current.

That said if you're sure its ONLY the front electrovalve staying open its an ECU fault as i'm 99% sure that although they both switch on and off at the same time the front and rear are off different pins on the ECU. Does the rear electrovalve work? That might be throwing the symptoms a bit you see.
Top

A quick Lexia session will confirm.

Chris is right that although the two electrovalves are driven by independent drivers in the ECU, both switch at precisely the same time and via the same inputs...
Top

I will have to get the lexia out, its been ages since i actually used it on my own car!

The new pulley should be arriving on thursday at a rather steep £122 from the dealer im also going to fit a new auxillary belt of the correct length, as the current one is a bit tight.

The xm has spent more time on axle stands recently than on the ground!

Im looking forward to being able to drive it again, the cx is good but with the short journeys it actually costs money on diesel due to the twin tank system-- this is not something im used to

Well the pulley arrived and has been fitted today,
Think ill be keeping an eye on it though as i couldnt get the bolt that tight due to the engine turning over.
Did use plenty of threadlock though.

I also fitted a belt of the correct length, someone forced on a shorter one at some point.

I havnt yet started it, as i decided to bite the bullet and have been dismantling the front end today in search of the turbo leak.

Should free the intercooler tommorow.
If anyone has a good un spare let me know... The bill for this month is creeping up and the car hasnt even been run!


Yesterday I had my brother and Dad over to crack on with the estate i got recently for my parents to use.
It turns out its not as much as of a basket case as I had thought.
It has full and very comprehensive service history untill 2007 written down.

I managed to fix a very very very simple major LHM leak, (i Like leaks like these!)
Someone had fitted new rear spheres (dated late 2009 and I pressure tested them to about 40bar

)
and they had left the old sphere seal in situ, so double seal = big LHM leak!- not any more !

here is a hazy picture 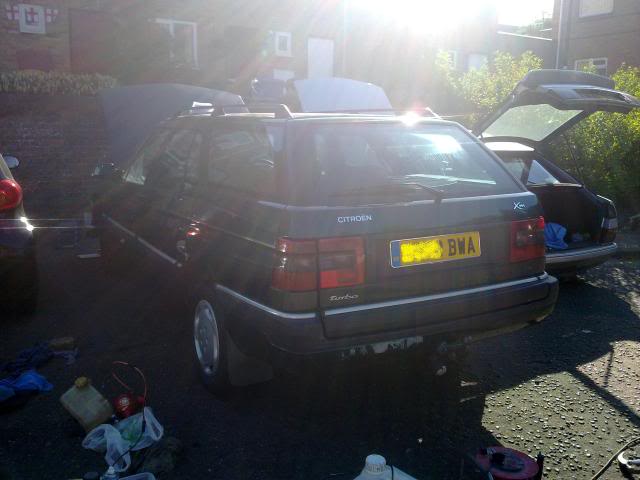 and the suspected headgsket failure turned out to be rather more simple crap connection. Hopefully some sandpaper and a new seal may fix this one!

Seriously though becasue of the water leaked the engine bay looks like its been drive through the sea! all for a cheap seal!

The other annoyance is that the owner lost the keys, so im trying to source a lock set as he dismantled the ignition and its rather fiddly to start!

Thats rather a long post for me!, an update will come tomorow when i free the intercooler and go get some new rubber for the estate.
Top

Dave, you're missing a wire clip from the rad socket. I think I may still have some spares rescured from dead rads. If I do, you're welcome to one...

I have a clip for your rad. PM me your address and I'll pop it in the post...
Top

Cheers Jim, I have Pmd you as im not sure if the bit i have is a clip or not, it looks very simple for a clip - just a piece of strong wire really.

However after water and air testing the intercooler, it is leak free?!?!?!?! WTF

Where the hell is my boost going? pipes are all fine,
I do wonder if the turbo i got rebuilt( not by a specialist ) is buggered

arghhhh
Well i have decided it is not a fruitless effort, as the front crossmember is very rusty and needs treating

To make myself feel better i went down to the scrapyard to buy 3 tyres for the estate, came back with 6 though- how does that work

Here's a piccy of the clip. It's made of springy wire and the shape is critical.. Odd about the intercooler. You sure there's no holes in the pipes or the little rubber hose that goes to the MAP sensor on the side of it?

Great deal on tyres.. Convert it to a six-wheeler and get the most out of your good fortune!!!
Top
Messages: 601