The oil leak I mentioned earlier started getting worse during the winter. After cleaning the sump and the surroundings the sump gasket was identified as the culprit. The bolts were pretty loose all around, so I tightened them up a bit. It helped for a while, but the gasket really needed to be replaced. It's a sealant gasket, and I had never done one of those before, so I was a bit nervous going at it. But it seems to be holding oil now. There's also a very slight leak at what looks like the front (foremost) rocker cover. Need to address that next.

Here's a guide that I found helpful on the job: http://www.406coupeclub.org/Files/HowTo ... ngines.pdf But unlike the guide says the oil screen certainly doesn't come off by just pulling on it; there's one of those annoying clic(?) hose clamps on it.

And this document says that threadlocker should be used on the bolts: http://www.autocats.ws/manual/peugeot/4 ... bblsk3.htm It also gives you a pattern for tightening the bolts. I used a drop of CRC Soft Lock which is quite easy to remove, similar to Loctite Blue.

Also the sump itself in the guide looks different from mine... maybe they put the baffles just in the Activa? 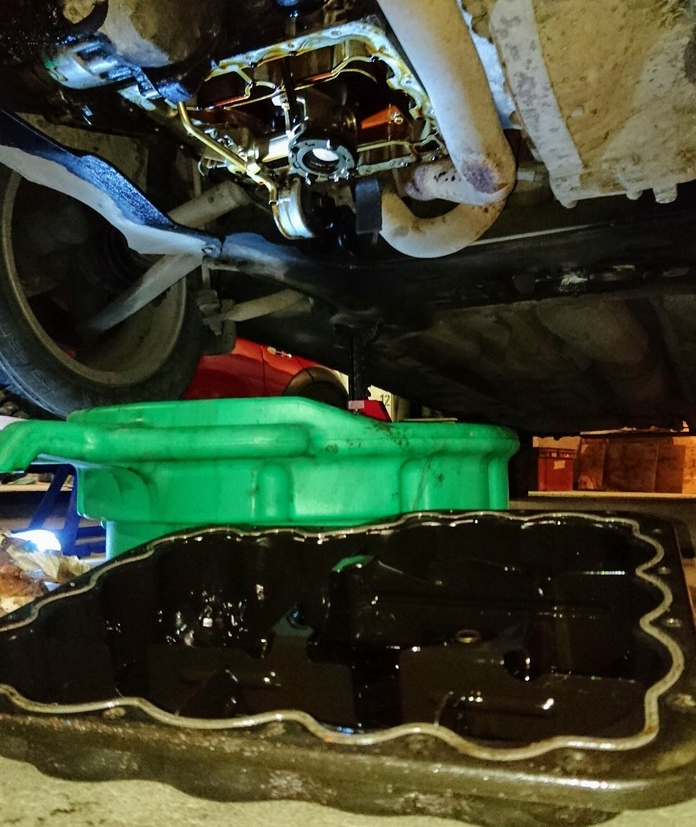 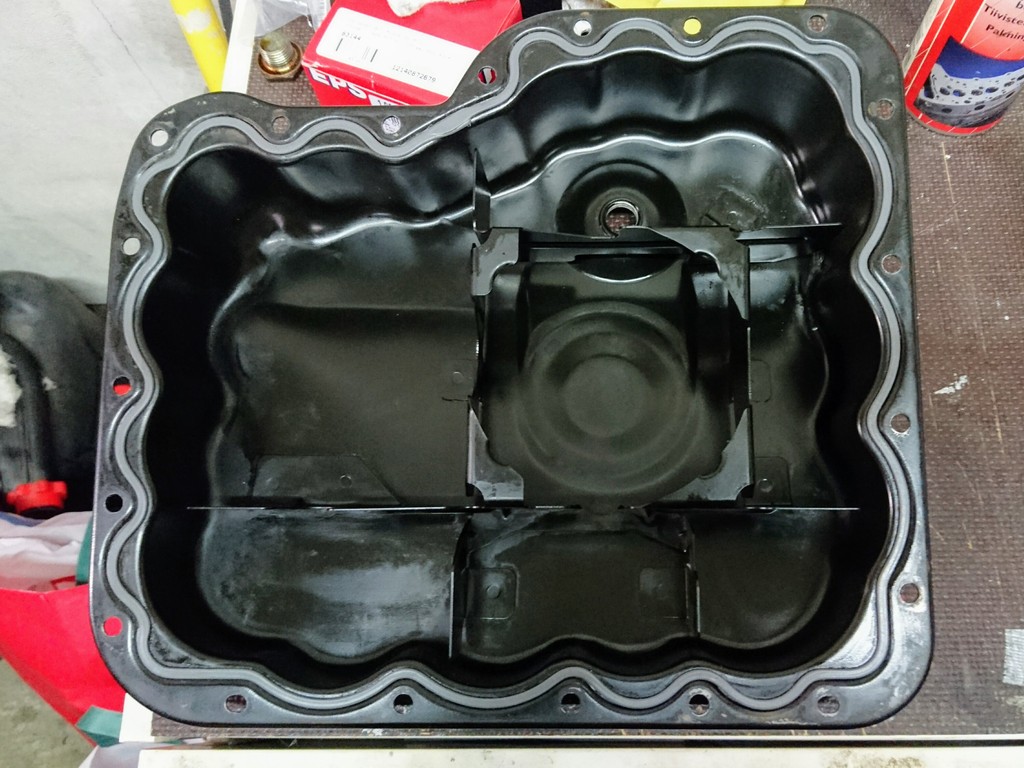 Thanks, I shall make some local enquiries

I'm sure there will be a 3D printer somewhere here around here...
Top

Ok, let me know then.

In addition to the forementioned issues the Sensible Daily would probably need new rear suspension arm bearings, as it's making some nasty sounds. And it really needs a new rear bumper, and a new paint job... nearly every panel on the car is dented and/or scratched, or just poorly repaired. I've been thinking of getting a regular mk2 Xantia in the same colour to use as a donor for various body panels, like all four doors...

But for now I think I'll settle for removing the rust from the sills. The sills seem solid, so it's hopefully just surface rust as the paint has been chipped at the jack points.
Top

very nice work. i love how u are rescuing this car.
If u like to share the 3d file for those bracket thingies i'd appreciate one. got 3D printer at work and have been looking for Citroen parts to print

It makes sense (to me, at least) to put baffles into the sump of an Activa. As it does not lean at all (OK, 0.5 degrees, but that is nothing compared to a normal car) the oil could, for a few moments at least (during spirited cornering), move away from the pickup, which could allow air into the lubrication system or a momentary drop in oil pressure. Baffles would slow down the movement of oil in the sump, keeping it in the area of the pickup.
Last edited by Hell Razor5543 on 10 Mar 2017, 19:06, edited 1 time in total.
Top

I'm sure there will be a 3D printer somewhere here around here...

I'll print some Jim, I have a few different materials you can try out including a carbon fibre impregnated plastic. Sounds a bit posy but its as tough as it gets really, wears the printer nozzle fast though. Well actually Jon will print them, my friend that came for the V6 with me.
Top

James, that would be excellent

The oil sump gasket job I did last year didn't really hold. I guess the sealant I used wasn't up for the job, as it seems to leak all around now. Any recommendations?

The sump is somewhat scratched and dented, so I sourced another one. When searching for a replacement I found that the sump baffles were present only in the early V6's (at least up to 1998 which mine is), and are of course NFP now. Luckily I found a used one with the baffles.
Top

As the Finnish government is now supporting flex fuel conversions on older cars*, it's probably a good time to take my E85 plans forward.

I would've thought that that big changes in fuel trims would throw a fault code. And even if the ecu would adjust, the stock injectors (176cc) are too small (at full throttle), so it's not really the perfect solution. I was thinking of getting bigger injectors and a piggy-back flex fuel kit with an ethanol sensor, but maybe it's possible to do this with just the bigger injectors..?

*) You can apply for a 200€ compensation after the conversion is done and the car is inspected and registered as flex fuel. This applies for cars that are first registered before 1.1.2007. E85 fuel is also taxed a lot less than gasoline, making it easier on your wallet. And the ethanol is made out of biowaste, so it makes you a tree-hugging hippie without the need to drive a Prius.
Top

Interesting on both the early sumps and on running an ES9J4 on E85...

The ECU and fuel system must have plenty in reserve which goes along with my thinking that the ES9J4 was very conservatively rated and good for rather more than its 194hp...
Top

Only just read this thread...

Buying a V6 Activa for a sensible daily? 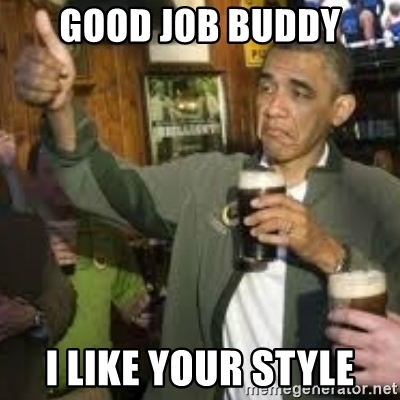 I am sceptical that you could get reasonable performance from an unmodified ES9J4 running on E85. I believe that I can tell the difference when running E10 (at least when the engine is cold and running in open-loop mode).

You can of course fir a higher pressure fuel regulator to get a bit more fuel flowing, I have a 3.5 bar regulator in my XM (for running E10), but it does make the trip computer inaccurate.
Top

E10 is also lower octane fuel, right? At least over here the options are 95 E10 and 98 E5. The latter is certainly better for the ES9J4 because of the octane rating.

E85 is 106 octane, so it shouldn't hinder performance unless the injectors run out of capacity. I have a 3.5 bar fpr ready to be installed, but the difference in injector flow will be only about 10cc, so that alone won't be enough for E85.

I asked about the E85 use in Facebook's Xantia Activa group (where the most ppl seem to be French nowadays). There was a guy who has driven his -97 V6 Activa for almost 30.000km on E85 without any modifications. He even had fueling logs showing average fuel consumption at 11.79l / 100km (about 20mpg I think), which isn't bad at all for ethanol. My Mini Cooper S drinks 12.5l / 100km of E85 on average.

I think it's the energy density rather than the Octane rating that is the problem - to get the same amount of bang you need put more in. Putting in a higher pressure regulator fools the ECU as it flows more in the same time, but if you want to get the full effect you probably need to re-map the ECU.
Top

Yes, energy density is the reason why you need to put in ~30% more compared to gasoline. But when that requirement is satisfied there really shouldn't be any real world difference in power output. And the ECU adds that fueling for you based on the Lambda signal. Or at least the ES9J4 ECU does. Most fuel injected cars will throw a fault code when the ECU is asked to increase (or decrease) fueling more than 20%, because they'll think there's something wrong with fuel delivery.

With a re-map you could get a few extra hp with E85 (in a non-aspirated engine) if the engine's igntion map has been knock limited with gasoline. And of course cold start issues could be addressed with a re-map.
Top
Messages: 135