vacum clean, ozon treatment, clean the a/c and the dead canine will leave the premises. Congrats on the new V6

It's been almost a year since I bought the "new" V6... I guess it's time to write a bit more about.

I've been referring to it as the sensible daily driver mostly as a joke, but compared to the Mini R53 it actually is quite sensible. The Mini's head gasket problem was actually a cracked cylinder head, and after putting a big valve head on it the clutch failed soon after. Then it developed a boost leak of some sort, and the radiator started to leak too. There's also an increasing oil leak from the heat exchanger. And lots of minor issues to address. In other words the Mini has been off the road for the bigger part of the last 12 months, and I've put over 25.000km on the Activa.

As I mentioned before it had not been very well looked after. Lets talk about the interior first... the previous owner was obviously very fond of chocolate and dogs judging by the chocolate stains on the seats & center console and by the huge amounts of dog hair right about everywhere. Found a receipt for candy bars under the seat too. Also it smelled like something had died in the car, probably from second hand smoking. After thorough cleaning and ozone treatment and leather treatment with Gliptone's cleaner and conditioner, it's now ok.

The floor mat was pretty wet, which probably contributed in the bad smell. First I though that water was leaking in from somewhere (sun roof was my first suspect), but it just took damn long to dry out. Judging by the water damage in the fabric "panel" under the glove box, the cowl under the windshield had flooded at some point, and maybe the floor had not been properly dried afterwards. Luckily this piece was still available from Citroen, and wasn't hugely expensive. Original at the top of the pic. It was very brittle, couldn't even hold the weight of the interior light.

Replaced the pollen filter on the same go. About time too.

The leather is pretty worn on the driver's seat, but the foam underneath is intact, so it's not a bad place to be in. The seats are actually a transplant, probably from a '97 car. Door cards are still original Activa cloth pattern. The car didn't originally come with heated seats (no switches in the center console), but apparently the seats are heated as I found the connectors under the seats... anyone have a clue how to test whether the heater elements work (pinout of the connector)? 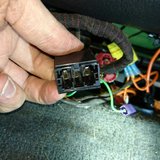 There were a few signs that the car had been "prepared" for the sale. Both motor oil and LHM were overfilled. Probably because it was leaking both. One of the headlamp rear covers was loose in the engine bay, and both covers had a hole cut in to them. Don't know what had happened there, aftermarket HIDs maybe (they're illegal here). At the time it had H1 bulbs, one yellow on the right hand side... I put in new Osram Night Breakers, made a huge difference.

The interior light bulbs were all LEDs, which didn't produce much light, and didn't work very well with the dimming, so I changed them to regular bulbs.

When I was cleaning the interior I found the original service book, which the seller claimed didn't exist. The last recorded service was from 2002 at 90.000km. No wonder he didn't want to show it. No idea why he left it in the car tho. But more interestingly it was in German, and the first record was from 1998 in Stuttgart. And I had thought the car was MY2000 and imported from Sweden. Looks like it was imported from Germany to Sweden (specifically to the island of Gotland) in 2000, and that's why the Finnish registration says it was first registered in 2000. Oh well.
Top

The original cassette player looked like it was put back in a hurry, held in place mostly by pieces of cardboard wedged inside the dash. Five of the six screws attaching the head unit and it's frame to the dash were missing. Also there was no sound coming out of the front and rear door speakers on the left side. This wasn't fixed by changing the head unit, so it must be the wiring. 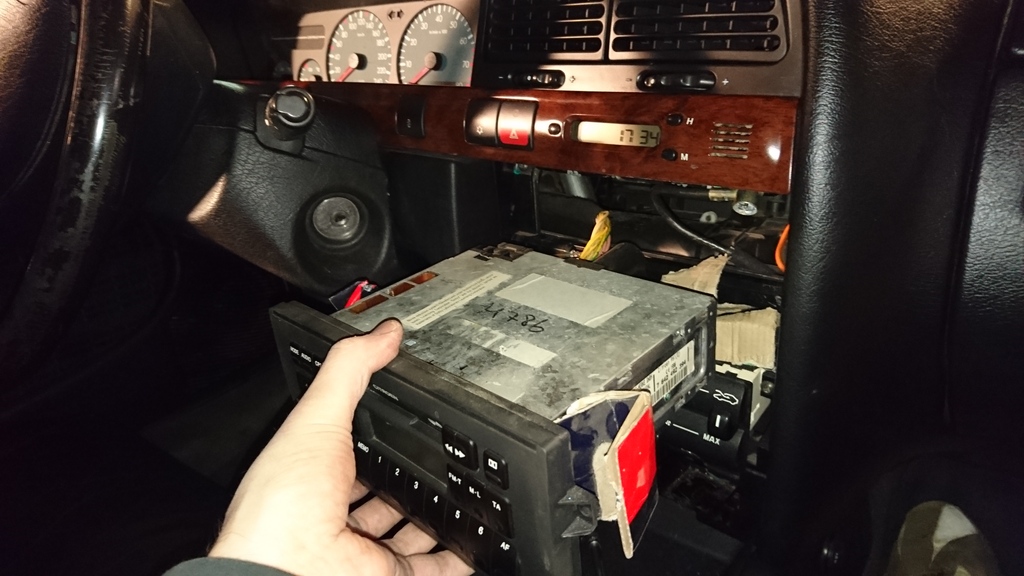 The seller was convinced that the car did not have A/C at all, although there's a button on the dash and a compressor attached to the engine with all the piping. Looking at it from a user point of view he was of course right; no A/C.

The black leather seats are not the best place to be in the summer without A/C, so I had the A/C checked: the piping between the compressor and the bulkhead had a leak in it. It's one piece made of metal and rubber piping, and it's NFP. It should be possible to fix it, but it has to come out first. Looks like it goes through/under the engine mount on the right side, so I gave up on it for now. Maybe when I do the timing belt...

According to the seller he had only needed to do oil changes and service the brakes during his two year ownership. When I asked about the steering wheel being tilted to the right he suddenly remembered changing the tie rod end just recently. Both sets of tyres (summer and winter) had one tyre that was worn un-even, so I guess the tie rod end wasn't fixed soon enough. I later noticed that the right side lower ball joint was also worn out... 69€ with parts and labour at the local Citroen specialist, not too bad. I also had alignment done. Now it looks like the lower wishbone bushes are shot. Need to address the bushes before the next yearly tech inspection (our MOT).

Ther radiator looks pretty new. There's also evidence that the dash has been removed at some point, hopefully to change the heater matrix. At least there are no leaks atm.

There was a slight LHM leak at the front from the accumulator sphere, made a little green puddle overnight, so nothing major. This was fixed by tightening the pipe fitting to the sphere. At least neither of the Activa cylinders are leaking. The rear one is slightly moist at the bottom, but not even a droplet under it. The hydraulic pump has a very slight leak at one of the pipe fittings, need to fix that next. I recently put in new LHM, and the stuff that came out looked rather clean. The filters were of course a bit dirty. 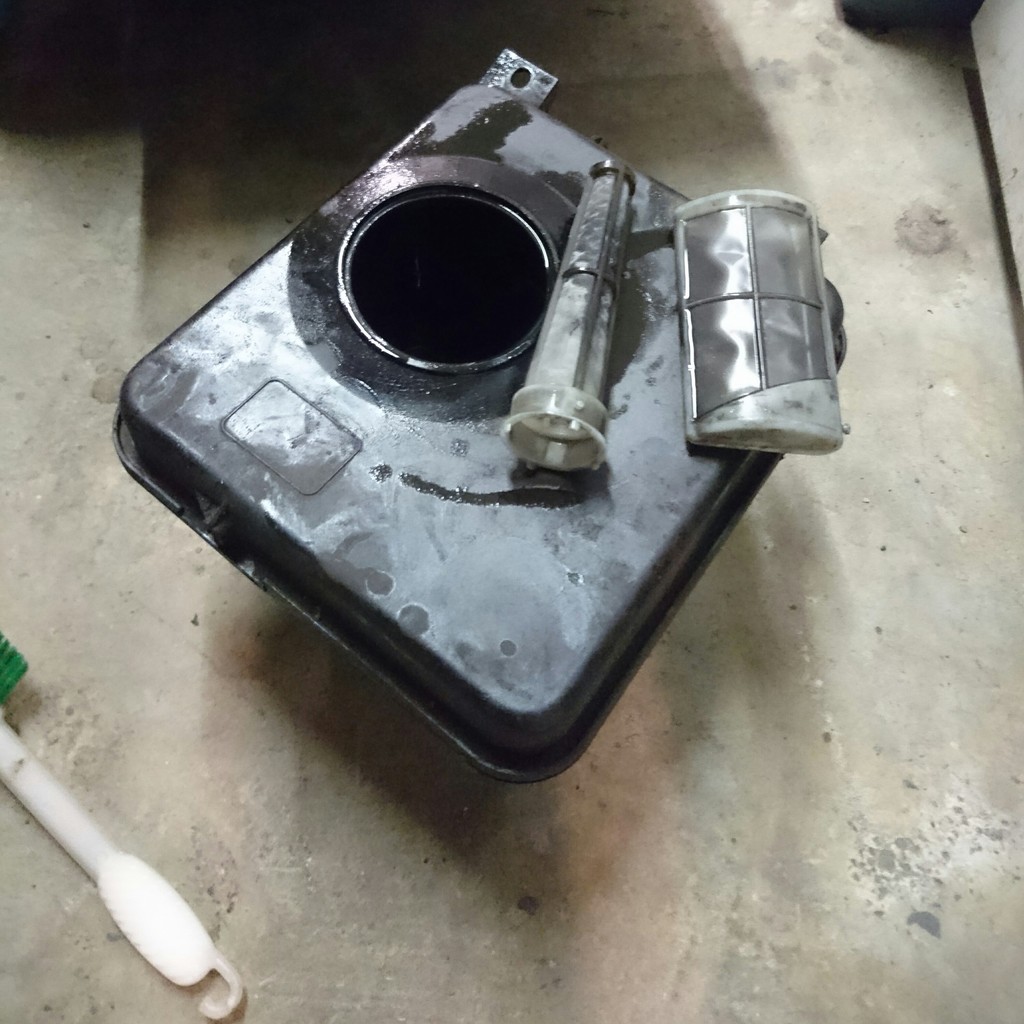 Hey, there's something clean in the engine bay! 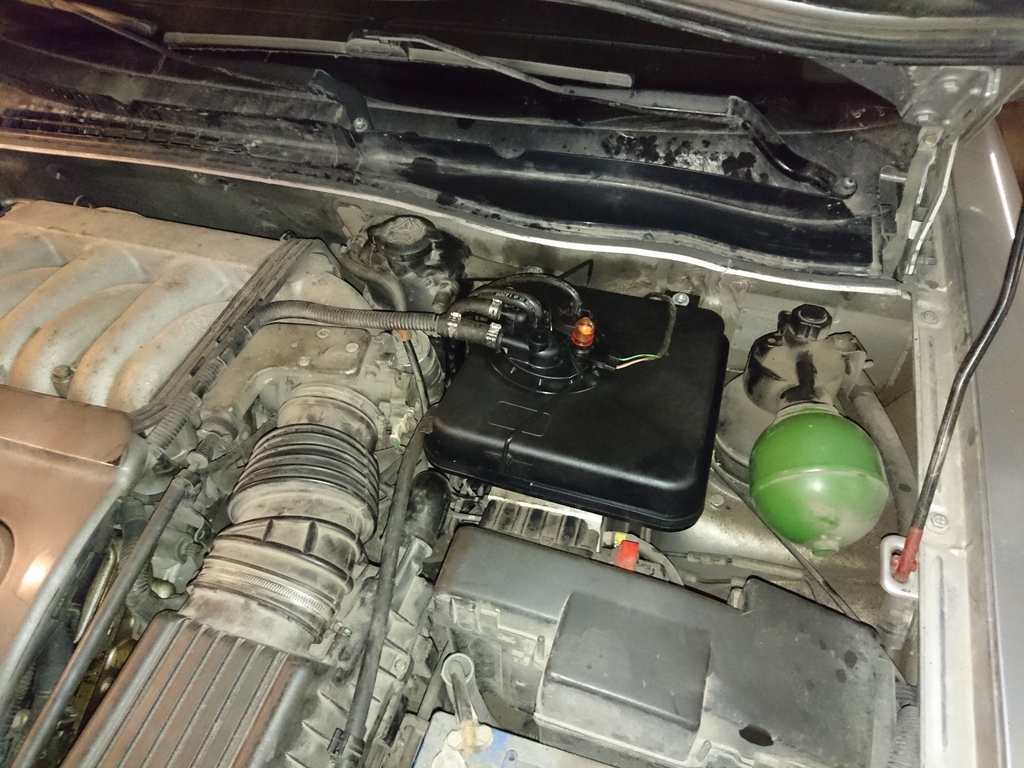 Right side fog light was completely loose inside the front bumper with all three attachments broken. I removed both fog lamps because having only one would've meant a failure at the tech inspection. This time I saved a lot of time by taking the front bumper off first. Live and learn.

Spare tyre and it's cradle were missing. I found a used cradle and an unused spare tyre on a very rusty steel wheel from a Finnish Citroen forum. The cradle looks a bit different than what I had on my previous V6, but the fittings look the same. Luckily I didn't fit it right away, gave me better access to this... 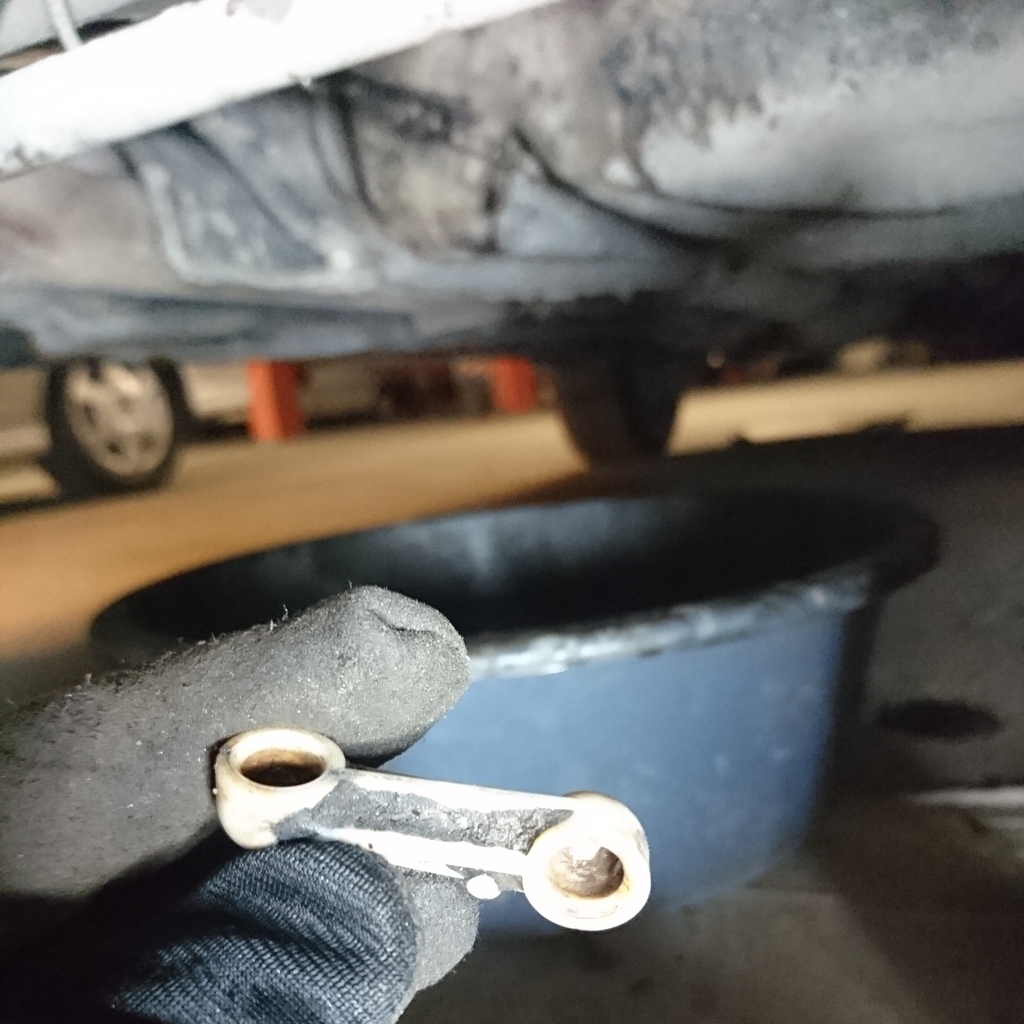 I made a temporary clip from steel wire until I got the new clip from the dealer. It was less than 4€. Must've been too expensive for the previous owner.

Same thing with the clips that attach the rear parcel shelf to the hatch, the left hand side was completely missing. Couple of € and one minute to attach. Including taking the pictures. 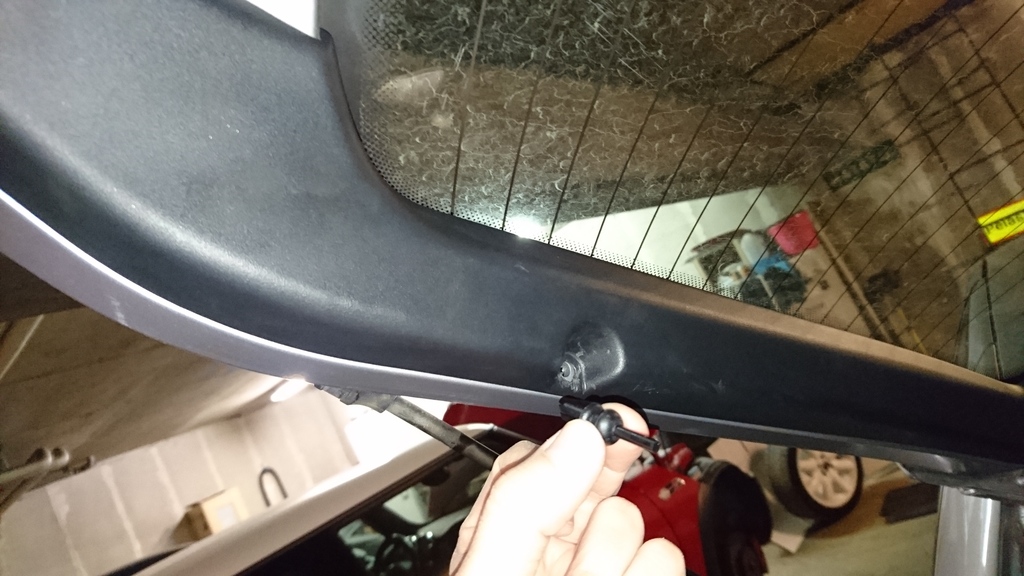 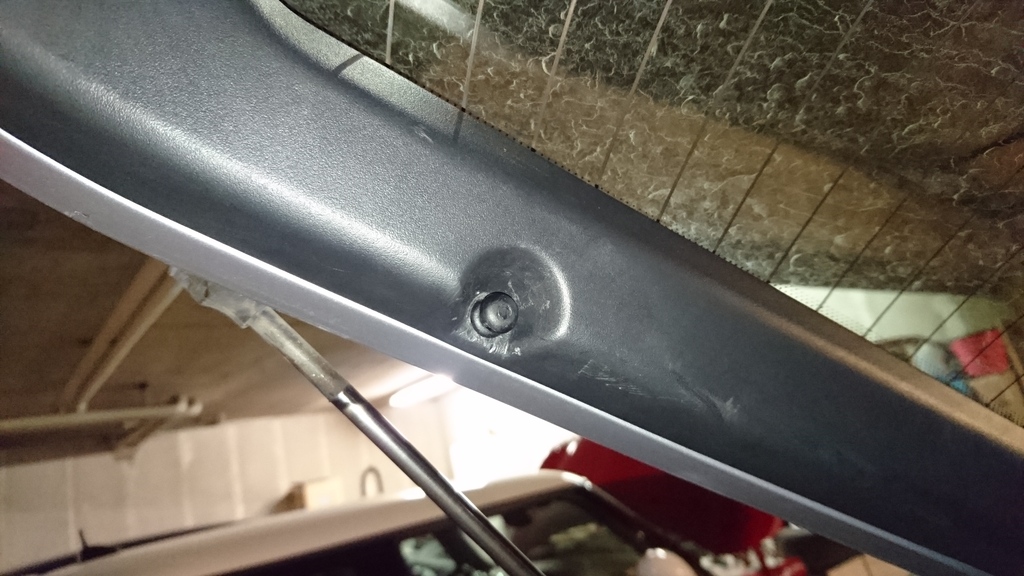 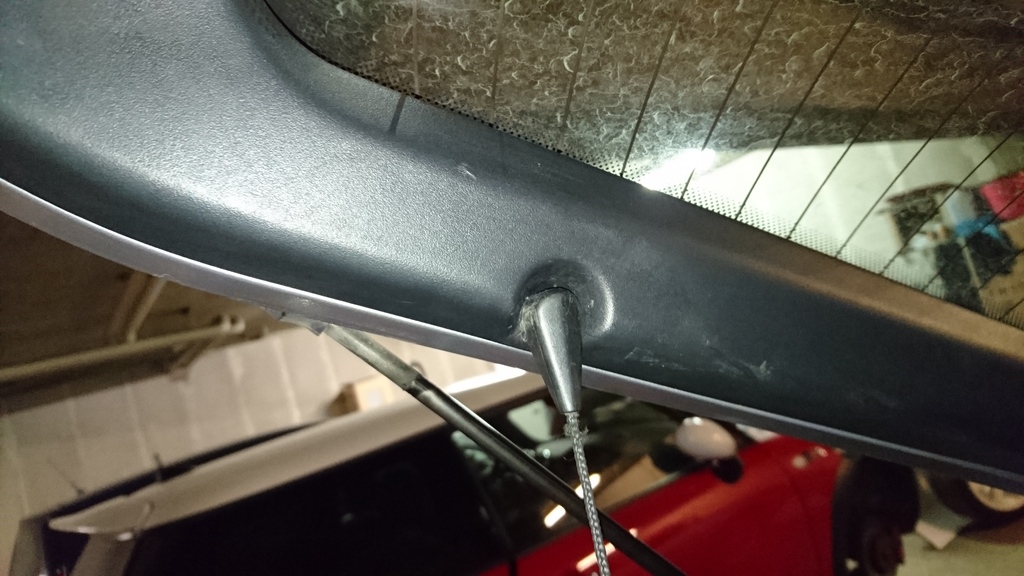 Also the drivers side windscreen washer nozzle was broken. And the passenger grab handle screws were loose. You'd think stuff like that would bother you.

The roll corrector rods and pads were pretty worn, which seems to be the norm unless you're buying from another Activa enthusiast. And there was a rock stuck in the scissor mechanism... no wonder it was a bit inconsistent when going in to corners. I bought a set of new rods from the French Activa Club, and while replacing them I noticed that the old ones had been filled by welding at some point. New pads from Citroen were 68€!!

After installing these the car was of course tilted to the other side, so I had the pleasure to do some adjustements on the system. It was on ramps three times before I got it to stay level, but it also started doing the Activa shuffle every now and then. 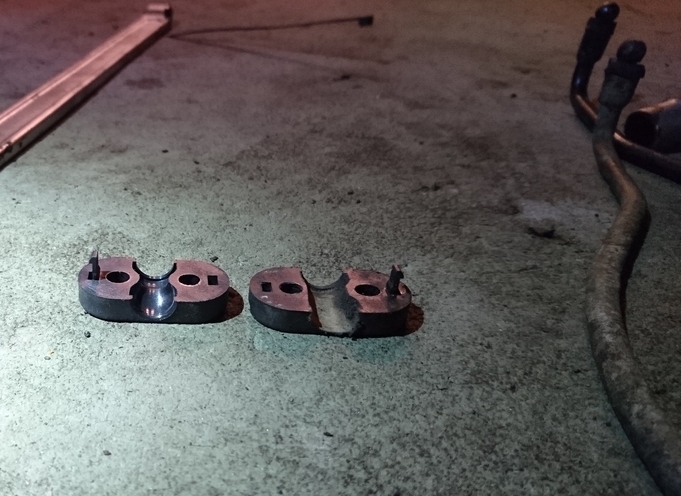 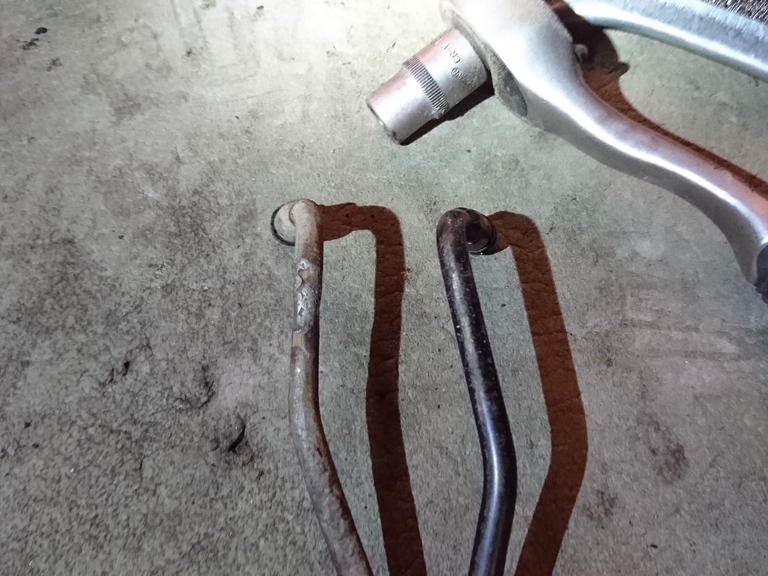 The price of those pads got me thinking about cheaper choices, and suddenly I remembered that I had seen someone somewhere using a 3D printer to make them. I finally found the post at the Activa group pages in Facebook, and got a link to the 3D drawing. There's a coffee shop right across the street from my place that does 3D printing (yes, a coffee shop!), and it cost 18€ to make these. Using a less precise "resolution" it would've cost maybe half of that, and it would probably work as well. 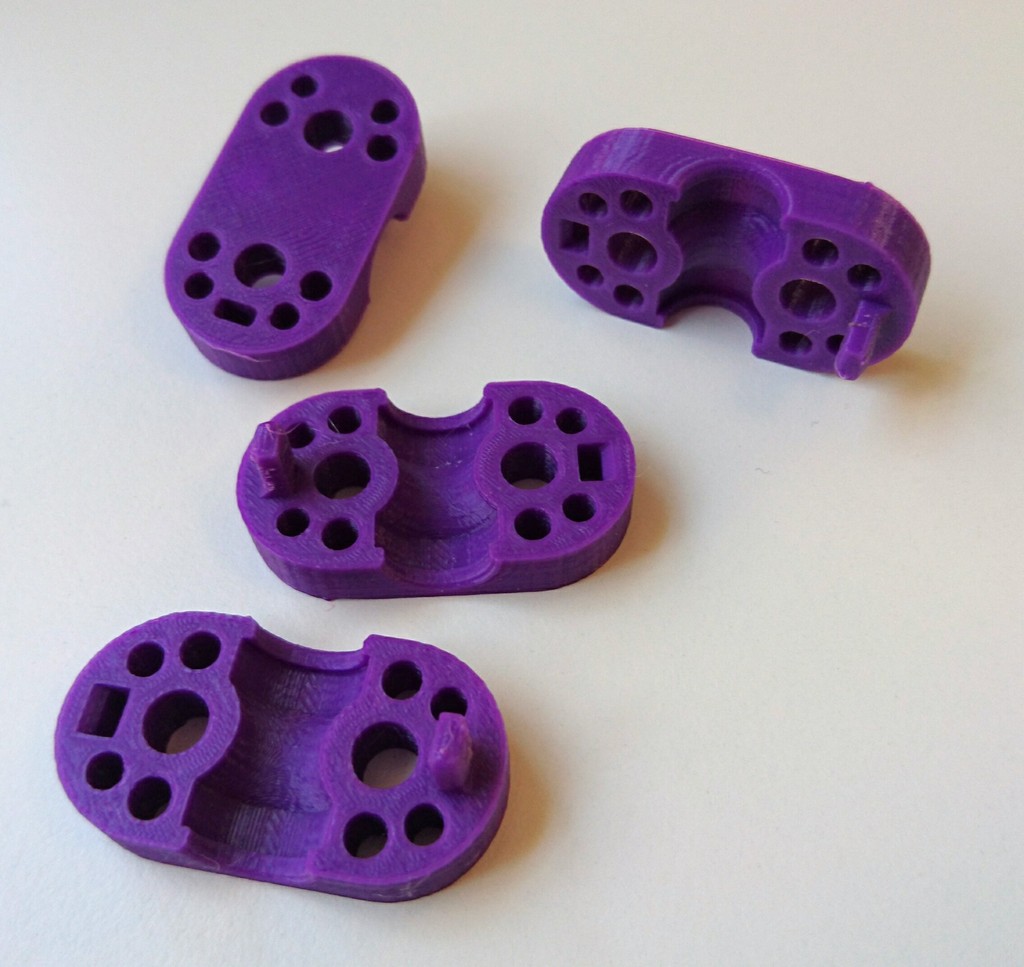 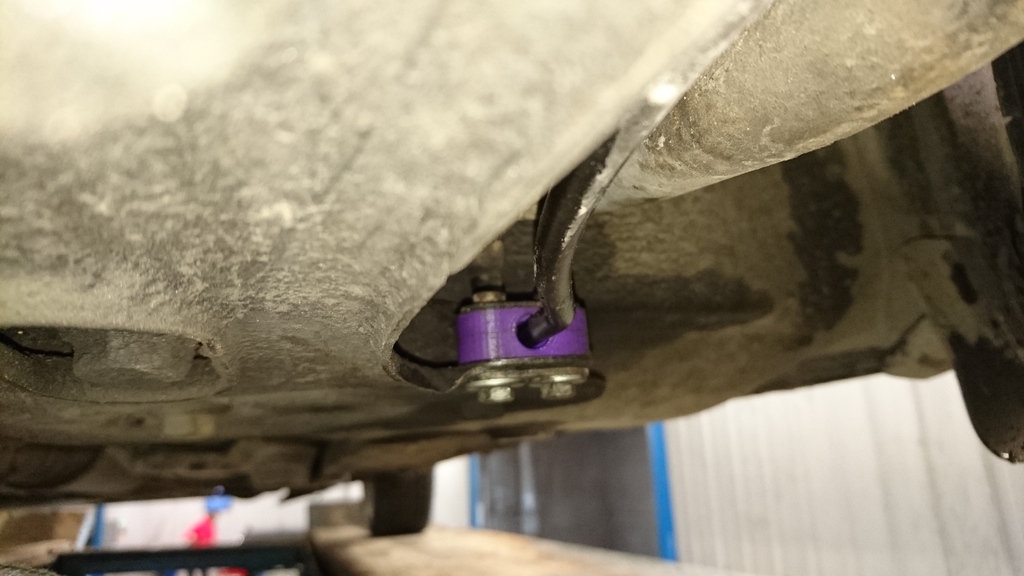 It will be interesting now to see how long they last... But at that cost it does not matter if their life is not as long as the originals...
Top

It will be interesting now to see how long they last... But at that cost it does not matter if their life is not as long as the originals...

They haven't been on very long, so it's hard to tell about durability. But you're right, if I can get a set made for about 10€...

The second set of wheels that came with the car looked a bit horrid at first. But they cleaned up ok, so I decided to use them as summer wheels at least for now. They are quite heavy tho. I would very much like to replace them with some 17" OZ Ultraleggeras, but as they cost more than the car... 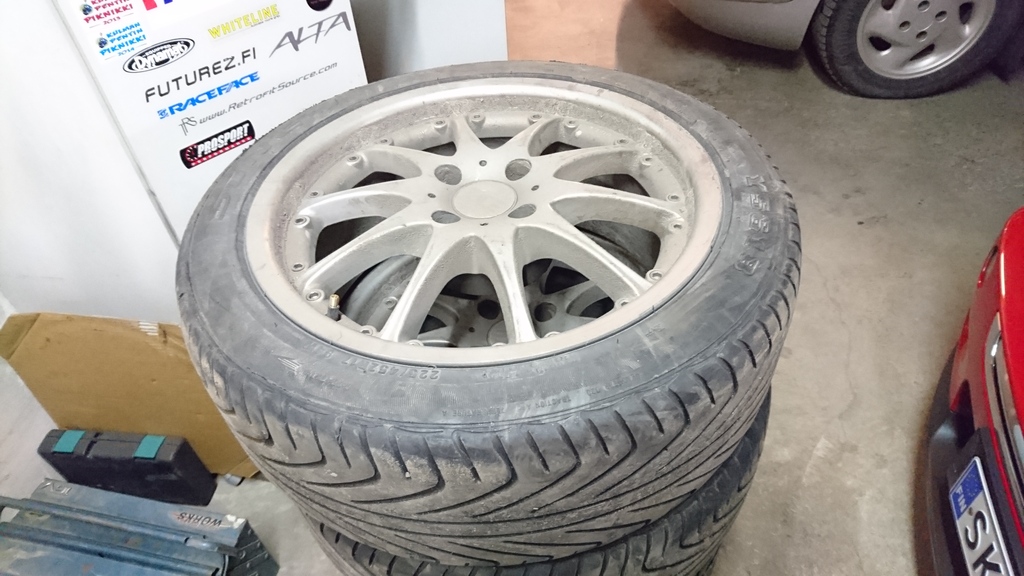 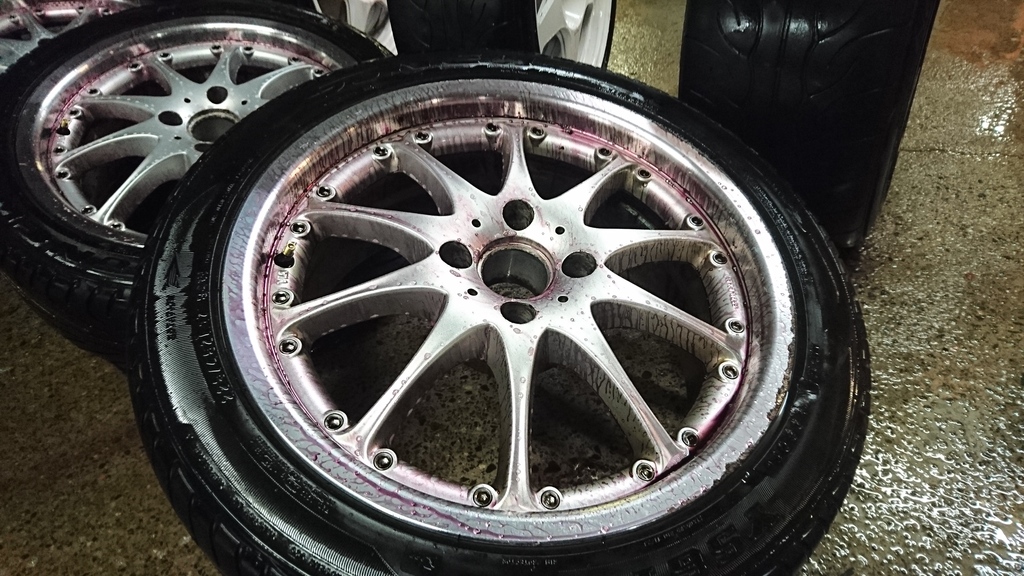 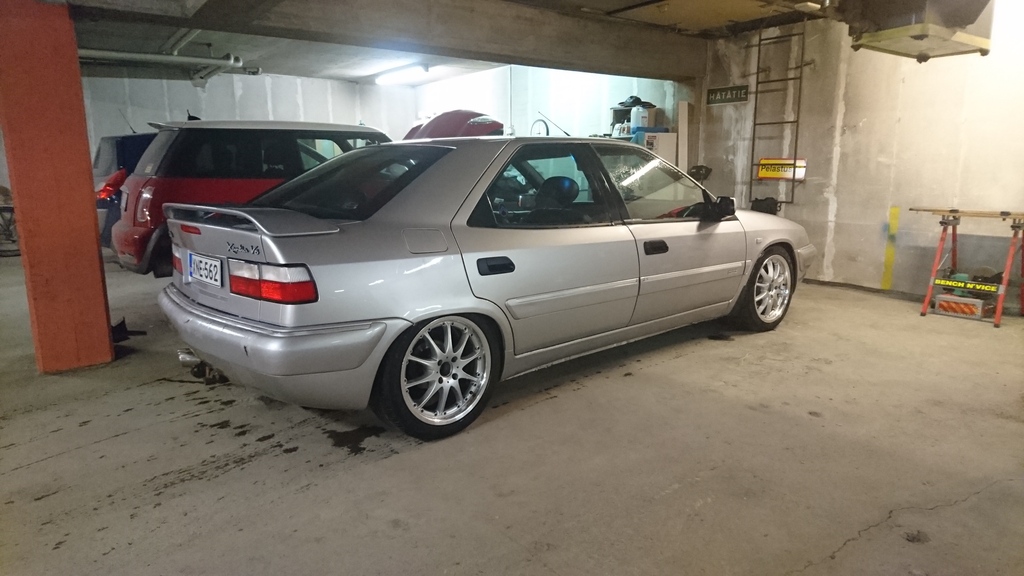 (the rear bumper has a horrible rattle can paint job on it, and the paint started coming off the first time I washed the car)

The tyres on them were slightly too big for the car (225/45-17), and I don't really have much faith in the Sunew and Zeetex brands, so I got a new set of Kumho Ecsta SPT's in 215/45. They work nicely on the Activa, quite stiff sidewalls. The original Activa wheels now have studded Nokian Hakkapeliitta 8's. Best winter tyres I've ever had.
Top

Those wheels look good but I still prefer the original Activa wheels...
Top

CitroJim wrote:I think at 10 Euros a set for the guide blocks you have quite a lot of custom for them if you wanted to make them available to other Activa owners

Those wheels look good but I still prefer the original Activa wheels...

You could probably have them printed cheaper in the UK. I can send you the 3D drawing file for that. But of course I can arrange you a set too.

The original wheels are nice, but the ones on the car are not in the best condition. Anyway, our winter is quite long enough for me to have them on the car 4-5 months every year. 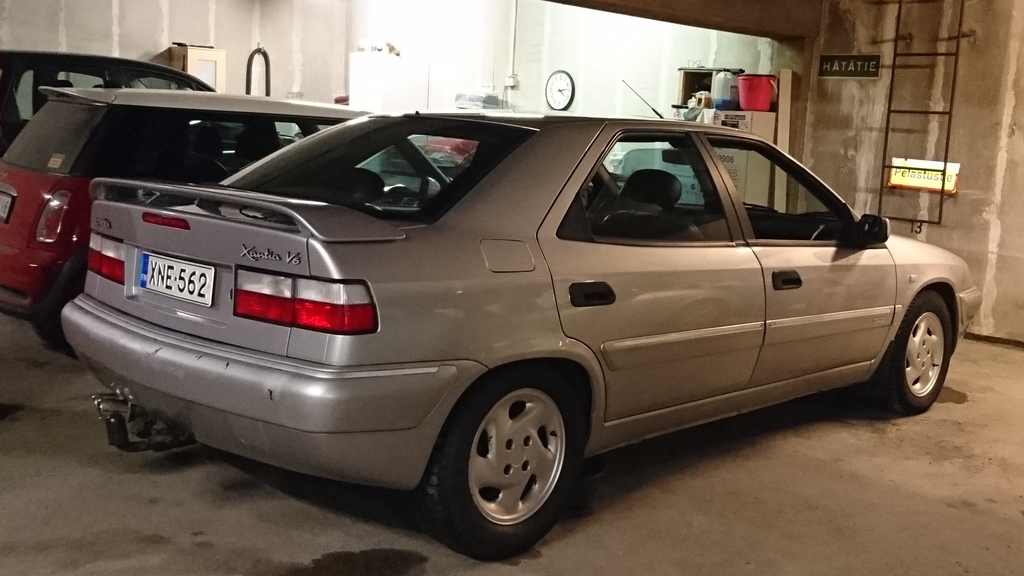