They really are the biz Chris... I was thinking of a set for the Activa but they wont fit on the lockers properly

CitroJim wrote:They really are the biz Chris... I was thinking of a set for the Activa but they wont fit on the lockers properly

No, that is a good point actually. My locking wheel nuts are in exactly the right place, the garage. As interesting as the Activa wheels look, I can't see them being half inched, even in the Northeast!

Ive not done much with the cars since my last update, they are all behaving.

The Traction got its new tyres fitted yesterday, some new Michelin Classic X tyres and Michelin inner tubes too. The tyres it had fitted are old, very old. My dad has owned the car for over 30 years and its never had a tyre replaced! They tyres were not new when he got the car either and it seems very light on tyre wear, so perhaps they could have been somewhere near the originals. It has done 92,000 miles from new, so if not original, its probably not had many sets! They still looked ok with a few small cracks and decent tread, however their age was shocking so they had to be replaced. Good job too as all they looked much worse when removed from the rims and the beading on a few actually tore

Still, its new tyres should last it a while!

The ride is slightly smoother and the steering ever so slightly lighter. The car itself going an absolute treat, anyone who is going to the ICCCR will find it there. Vince is coming up on Sunday to give it a detailing session, im looking forward to that

In preparation for the ICCCR the C15 has gone away to have some surgery to knock off a few years. Though its turned into quite a job and im not sure if it will be able to make an appearance there now. Still, its in the right place, a Classic car restoration place who actually build body’s for old car chassis with fantastic skill.

I have came to a conclusion about my 3 car situation, finally. Ive decided I would be stupid to sell the C5. I have spent a good while putting together a list of possible smaller replacements and have been to see and drive a few. Nothing really strikes me and stands out as a car I would like to live with for a good while and all would be a compromise over the C5. The C5 is a great car and does everything I need and want from any car. Ive done a good few miles in it this week on varying roads and its still impressing me. There is also absolutely nothing wrong with it and nothing which it needs. Its just turned 36,000 miles, recently serviced, has a very good set of Michelins, brakes are in excellent condition etc. The bodywork is just about unmarked, as are the wheels and it still smells new! Its a joy to do any long distance in, has all the toys I need (cruise and climate mainly), its very quiet, refined, the engine is superb with bags of torque. I like the size of it, the driving position is perfect for me, it fits 5 people and loads of luggage. I really can't see why I would sell it? 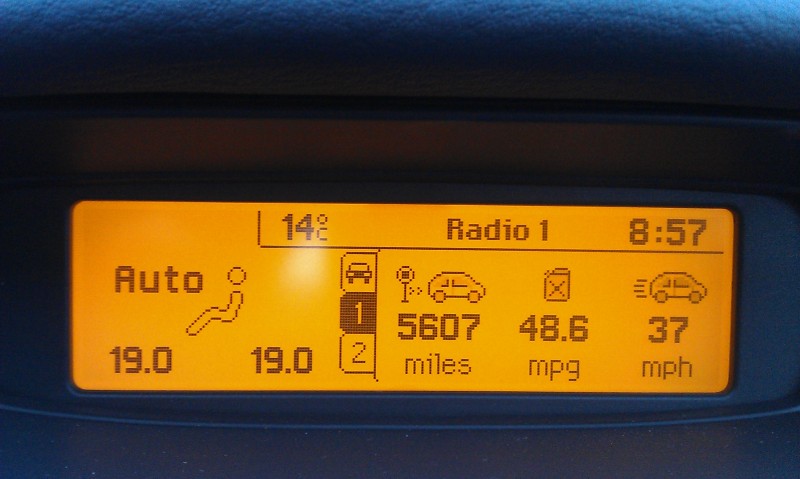 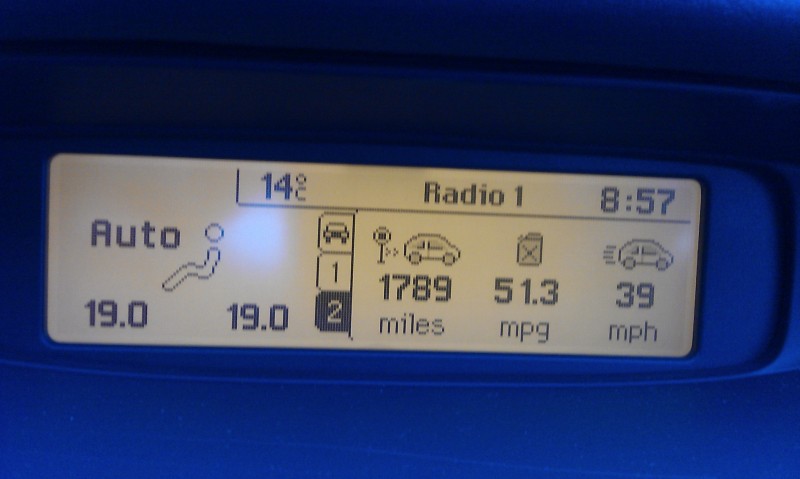 I have checked its trip computer and my calculations are as near as makes no difference the same. Given the size of the car, my varied driving conditions and my spirited driving style, I think that is superb. This is much better economy than I used to get from my previous 2.0HDi 110 8v C5s, I think mainly due to its effortless performance and so the engine is less stressed. Its gearing is also excellent, 2200 at 70. Im told it sits at a measly 3000rpm at 100.

I was driving the C1 yesterday and went to fill up, it did 50.2MPG over a tank full. It does make me think that it is pointless to change to a smaller car, as my heavy footed driving style and a small engine always results in not excellent economy. So the C5 is staying

I also can't sell the Activa, its better than it ever has been during my ownership and its a real joy to drive. I'll never get another one if I did sell it and so im not going to. It’s a car I always look forward to driving, it always surprises me with its abilities and its very appealing to me.

For the time being the three will stay, though its going to be a case of last in first out when things need to shift

I know that I dont want 3 cars for long as I know either the Activa or XM will fall out of favour and get very little use and energy. I like to have them all taxed and tested and on the road, if one was stood I would rather not have it.

Im really getting along well with the XM and it’s a much better car now than it was when I got it. However I don’t want to use it daily for many good reasons and so the C5 wins that one. Since the Activa is not going anywhere it leaves the XM with the short straw. Though im enjoying doing things with it and so it will stay for a while yet.

Everything else is going great, the C5 estate got a service, new front pads and a replacement pair of front Michelins this weekend. The C1 is due a service as its about 2 years old now, so that will be done soon. Im staying away from the stealer for this one though, £175 they charged for an oil and filter change last year on it. They did give it a wash though, however very badly and they didn’t dry it. I went straight home to wash and polish it. Its not been the weather to get the 2cv out recently, not with all this rain and flooding up here, but I did have it out yesterday.

I seem to have been all over in my C5 this week, including a trip to Scarborough and Whitby earlier in the week. Today I went to York to the air museum, which was a very good day out and the Spitfire flying by topped it off nicely.
Top

Hi Chris,
How long does it take to yours from Scarborough?
Top

vince wrote:Hi Chris,
How long does it take to yours from Scarborough?

Took me just over an hour and a half, its a nice drive over

Why is it so love it/hate it about C5's that even owners feel the same poles of opinion about the same car
- Chris, you've been all about the place in your thoughts on this one when you yourself suggested it wasn't
something you wanted any more!! lol

You're right Kev. Paul will be doing cartwheels. No point in doing the speedo cable now, there's a mountain
of them where it's destined?

I've never not liked the C5s Andrew, just thought I wanted a change and to something smaller to ease parking around here. However after looking at many cars I've decided there is nothing I want more which is smaller, so it seems pointless to change. The C5 has been reliable, apart from the DMF failure, and it does everything I want from a car. Plus I would struggle to find something else in its condition.

Honesty, I'd have it in a heartbeat...
Top

The prestige sounds like a beaut for either Jim or Paul

Your C5 sounds a real beauty Chris , I think other than a C5 III I don't think you would be happy with anything else

Honesty, I'd have it in a heartbeat...

I had not forgotten your interest Jim, I wasn't sure how serious you were or when you would want another car.

Paul expressed an interest while I was thinking about buying it, he seems pretty keen. I'll let you both know when its moving on

I think its time jim got to sample an XM, Pauls just being greedy

bxzx16v wrote:Your C5 sounds a real beauty Chris , I think other than a C5 III I don't think you would be happy with anything else

To be honest it is Mark, its as fresh as a new pin. I'm not even sure if a C5III would be the ideal replacement

Ive looked at a few now and have decided that it would need to be a 2.0HDi 138 or 160 Exclusive, to get the proper suspension and reasonable performance. Ideally it would be the 160bhp 2.0HDi as the 138 in the C5III performs quite like the 1.6HDI C5II, its very heavy. That said they are saloons and so fairly useless to me, it would need to be a Tourer. Which is probably what will replace my C5, but not for a good while yet. One reason I went for this low mileage car is so that it would last me a long time.

Oddly, I think its taken a few weeks away from using the C5 to make me realise again how much I like it.

Citroenmad wrote: Its not been the weather to get the 2cv out recently, not with all this rain and flooding up here, but I did have it out yesterday.

and of course, you'll be getting the 2CV out tonight to come along to the 2CV Club meeting, Shirley . . . ?