Handbrake cables now fitted, so i have a handbrake again, what a luxury! However im not totally sure it was legal using a car without a handbrake, but its fixed now.

So yes it has a handbrake, but the car is again unusable as the front brakes are rubbing yet again. I set off for uni yesterday with the car rolling nicely, no sticking brakes at all. After about 20 miles the steering wheel started to vibrate and the car started vibrating shortly after.

I carried on and it dint get any worse, however when i went for the brake the pedal and steering wheel were vibrating vilently. By the time i got off the motorway the brake had become free again and it was fine. When i got into the car park the brake really smelt of burning, no smoke this time though!

Dreading the drive home during the day i set off, all was fine again then the brake came on, more vibrations, not quite as bad as earlier and then it freed off again and was fine until i got home.

Ive had the brake to bits, as has my dad and the citroen indy, and its still sticking.

Why would the front brake get stuck on and then be released, even withough using the brakes between it rubbing and becoming free?

Im going to have a look at them later and maybe take it to the citroen place who fitted the cables, though im not sure if i want to drive it anywhere.
Last edited by Citroenmad on 30 Apr 2010, 18:02, edited 1 time in total.
Top

Finally, 4 years after the Big 6H went off the road, its finally back together, MOTd and Taxed. 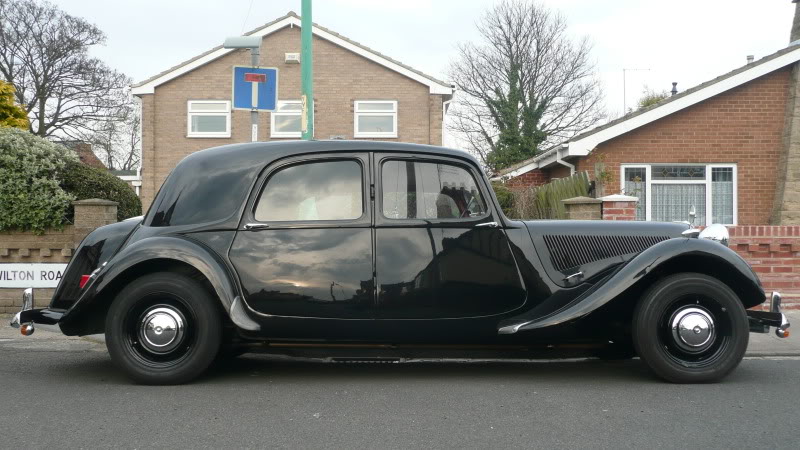 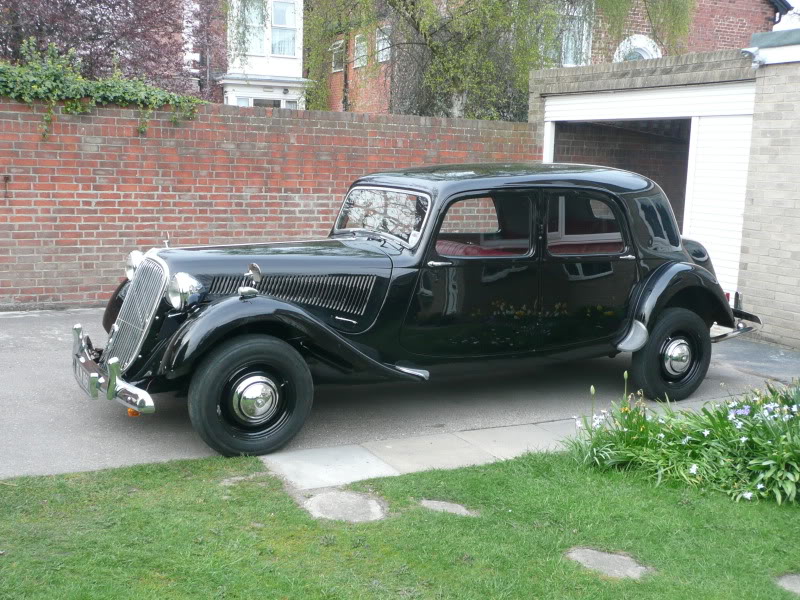 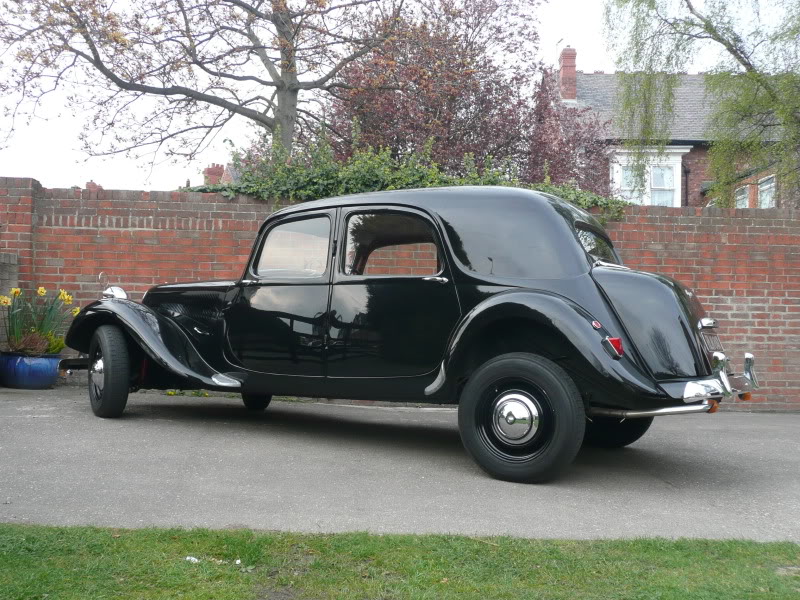 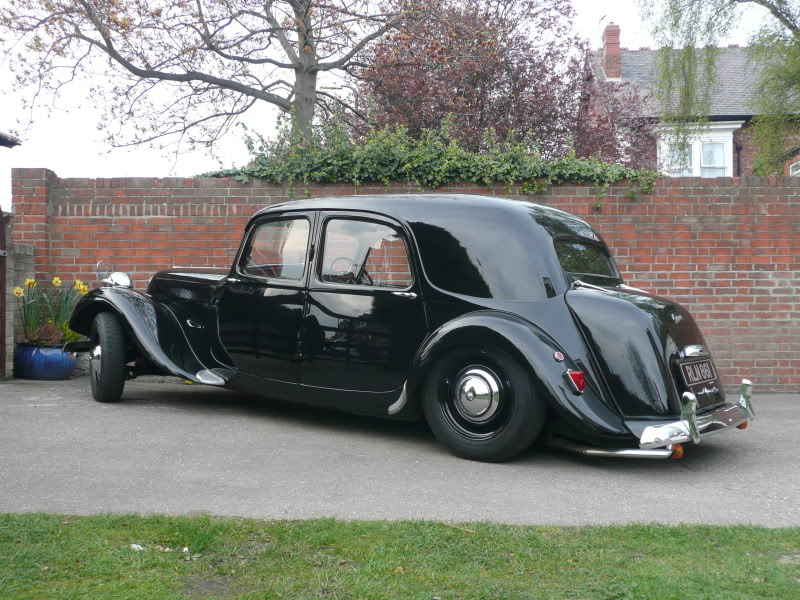 Back in on piece again.

We have drained off the old fuel now and put a can of fresh in, though ave not had to to give it a run to get the old fuel through.

Ive just nice to have it all in one picece and hopefully it should be usable once we get the fueling sorted out.
Top

Ive been driving the traction over the last few days. Its running much better now, almost back to its old self. The carb is a little rubbish so going to have to have a look at that, a replacement would be better but getting one might be near impossible.

Its the first time ive driven it on the road and is obviously very different from anything ive ever driven. There is just so much more to think about. It does drivel lovely, certainly gets an awful lot of attention.

Ive been trying different tyres pressures today. The standard is 20 PSi in the front and 22PSi rear. Sounds very low by modern cars standards but its what its tyres should have. We have usually had them at 34 front and 28 rear, just to give the steering a bit less weight. Ive just tried them at the recommended level, they look super soft and my arms are aching now, really unbelieveably heavy, especially when parking. Though it does ride better, it just floats along.

So ive got them in the middle of recommended and what we had, around 27 front and 25 rear, much happier comprimise and slightly easier to steer at low speeds.

Must have been very strong people in the 50s!

The white Xm has now been sold, to a member from here, Martycit. So thats one less car now, we were just getting far too many. Ive still got 3 more to sell, well 4 more but one is being replaced. Planning on changing one of our Seats with a 1.4HDi C3 soon.

Im sad to see the white Xm sold, but we couldnt keep it forever. Still got the 2.1TD, which could do with being used more too.

My C5 is currently almost perfect, the brake is truely sorted now and the handbrake works!
Chris.
Top

Want them alloys back on sx please lol!!
Top

The wheels you have are standard SX steelies with the correct trims, the ettiols that were on it are not orriginal for that car but they do look nice.
Pleased with your new toy?

Yes, the SX has the correct wheels on it now. It did look very nice on the alloys though.
Top

Good travel on the rear suspension!

Thanks for your comments Jim & Vince

Its now running lovely again too.

I would comment and compliment but I'm just too jealous

If you had an SM as well, that would send me right over the edge.
Top

Hmm, an Sm, now that would be nice. Maybe a DS Safari id like more though!


Im currently thinking about what to do with my problematic C5 and what to get to replace it. I dont think its feasable to keep this one, must be a friday tea-time car! Every other day there is somehting else wrong with it. But what do i get to replace it?

Ive just been looking on autotrader at Xantias, HDi Xantia might be nice to own for a while.

There is a lovely looking HDi Exclusive estate on, only 50 miles from me, mileage is creeping up but its a reasonable price. No TAX though, which is always a pain when buying a car, having to wait for insurance docs to come through before TAX can be bought and the car collected.

Id like to stick with Citroens but really dont know what else to get. There is only Xantia, C3, C4 or another C5 - though not sure if that is wise. Or stick with this C5 and hope it has less frequent issues.
Top

Citroenmad wrote:Hmm, an Sm, now that would be nice. Maybe a DS Safari id like more though!


I personally think the SM is the ultimate Citroen to have, seconded by a DS. but maybe, like my boyhood dream car the Ford GT40, the bubble will be burst if I ever get a go in one! Chances are very remote on my limited funds.

My radar is tuned only for a xantia TD estate auto presently and that's only if my current xantia is got rid of. Having two cars is problematic where I live and the cost of keeping two cars road-legal is really beyond my finances, hence the envy.
Top

Ive not been in an Sm, though i wouldnt mind it! Ive been in quite a few DS, they are certainly something to dream about owning. DS are ten a penny compared to a RHD 6H though

So your fancying an Auto 1.9TD estate then, must be quite a rare find i would think? Cant beat a 1.9TD, nice and simple.

There are many upsides to owning one car, having time to do things with a few cars isnt easy. It takes me hours per week to make sure they are all checked, tyres, oil etc. Every single weekend for the last few months has been spent servicing or doing some odd repairs/jobs on the cars.
Top

Citroenmad wrote:So your fancying an Auto 1.9TD estate then, must be quite a rare find i would think? Cant beat a 1.9TD, nice and simple.

I don't know but it doesn't have to the 1.9TD, a 2.1TD would be just as acceptable if they made auto estates? Rare indeed, so I expect a lot of competition should they come up for auction.
Top

You would have an easier time finding a 2.1TD Auto XM than a Xantia, i dont think there is such a thing as a 2.1TD auto estate in Xantias? 2.1TD is a superb engine though, i do like it very much.

Your current one is a manual then?
Top
Messages: 1849