Thanks for the run in the Xm Chris , i was very impressed with it . Sorry I didn't get to say goodbye as I had to get off , if you do decide to keep it and you need any polishes etc just let me know

The car is worth a maximum of £250 Chris. Thats more than what any scrap merchant will give if the car is collected from them etc. Get the calculator out, price up how much you estimate it to cost to so the necessary maintenance on it before body work etc.
Top

No problem Mark, its not the best example but it could easily be improved upon. Thanks for that offer, a machine polisher is certainly something I will look into

Yes, that is what I was thinking Robert, though even that seems steep for it. I have totted up a few things but its hard to know what exactly might be the turbo & engine management fault. Ill get the Lexia on it tomorrow and see if that draws any clues.
Top

Citroenmad wrote:Thanks for that offer, a machine polisher is certainly something I will look into

Gareth recommended this company to me for polishers
Top

Thanks for that link Richard, I have bought some products from them a few weeks back. Very good service and prices. Mark was telling me that ToolStation has an offer on a machine polisher for £42, sounds tempting!

Ive just been out in my Xantia, its looks and drives like a new car compared to the Prestige. Lovely to have working AC in that too, hmm. Im still waiting the hear the verdict from its family, Id like it but only at the right price.
Top

At the "right" price!
Top

You had better save it, mine was far worse than that and though i'll not admit it too readily while the car is in my bad books it has all been worth it.
Top

Chris570 wrote:You had better save it, mine was far worse than that and though i'll not admit it too readily while the car is in my bad books it has all been worth it.

The satisfaction is immeasurable. I've done it enough times to know exactly what I'm talking about - a 205GTi, Old V6, Rattiva I and to a greater or lesser extent Rattiva II.
Top

Well the deal is done, im now three cars up

I wasn't happy with the thought of it going to someone who might break and scrap it, its too good for that. Its family are happy with me getting it and think its late owner would be happy with it seeing some TLC and being improved. So all around im very happy with it, the price was bearly anything and its a model XM which I would have wanted, it being on LPG (which is working and has been recently serviced) is a real bonus too.

Im not sure how long I'll be able to justify or afford to run three cars, so I'll need to see what happens. For one thing road tax this year is going to be slightly crippling!

I had an absolute blast in the Activa today, I took it on my commute in the scorching weather, the AC was superb and the car was right on form. I did have a lot of fun around some deserted roads and roundabouts this evening, its not going to be an easy thing to give up and I doubt I can, so hopefully it wont come to that. So I'll need to see, over the next few months, which I prefer best out of the XM and Xantia and decide which to keep more long term. 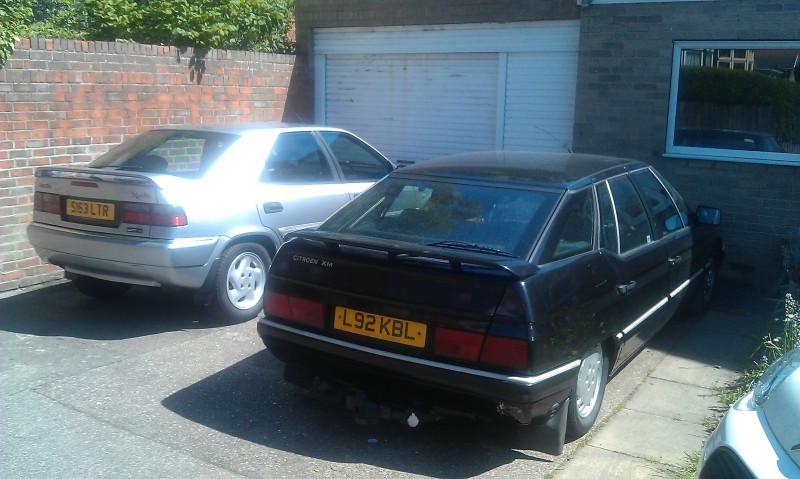 Its my day off tomorrow and I plan on doing a bit of tinkering with the XM to make a start on some small improvements. Hopefully ill get the lexia out and see what its telling me, try to sort out the drivers door lock which doesn't lock sometimes, have a look at the noisy exhaust and maybe do a bit of bodywork tidying if I get time. It also needs a full service, which ill try fit in tomorrow too.

Perhaps later in the week I'll put on some new spheres, which will improve the car no end. I also need to tax it before the month is out.

Then its a case of getting the turbo to see life again, need to investigate that and see whats causing it, thanks to those who have offered advice on that so far. The the next most noticeable job will be to replace the top speedo cable. After those three jobs are out of the way it will be much improved and the smaller things and bodywork dinks can be tackled as and when.

It has a towbar fitted which is looking pretty ropey and is in need of a tidy or removal. I think ill keep it on though as it would be an ideal car to use for the moutain biking trips and will take our towbar mounted Thule bike rack. I wonder what the towing weight is of this XM, anyone have any ideas?

It also needs tyres, the rears are absolutely bald on the inside edge due to them once being on the front with the tracking toeing out by a mile. I did the tracking on the car about a year ago and moved the wheels back to front. They are also getting down to the tread markers across the tread and got an advisory at MOT in November ... They are 'Corsa' tyres

The NSF is another Corsa with decent tread and the OSF is a brand new 'Accelera'. Bearing in mind Im not going to spend a fortune on this, ill swap the mismatched tyres to the back and get some new reasonable tyres for the front or perhaps try out some branded partworns.

The interior is something I really like in this car, its superb and in great condition. Its a bit grubby and could do with a leather feed but its not bad. The leather is nice and dull (Im not a huge fan of shiny leather), its not dried out and the only bit of wear is on the drivers side bolster. Im quite impressed that the drivers seat has Activa style side bolter adjustment too. I keep going and just sitting in it

You have a bit of work to be getting on with!
Top

I wasn't happy with the thought of it going to someone who might break and scrap it, its too good for that.

Im sure you must of read what happend to me with my last black one!

No matter, least she is saved

Better see the doctor then Paul

And I know once you've given her some care she's going to be magic.. I do like Black XMs (and Xantias) a colour that really suits them a treat...

Keep us posted on how she goes...
Top

Nice looking car Chris, I hope it brings you much fun.

All this talk of XMs and Xantias has made me want an Activa again. One with no sunroof or leaky rams..
Top

Activa_Mike wrote: All this talk of XMs and Xantias has made me want an Activa again. One with no sunroof or leaky rams..

You'll find those over with the bags of rocking horse manure Mike...
Top

Good, it will save me the cost of a divorce then!
Top
Messages: 1849