There was a run out with the Traction Owners club this past weekend, "The First Uk Citroen Traction Avant Safety and Reliability Run". Which me and my dad went to, however in the 2cv and not the Traction. The Traction is going well but I needed to drive and im fully comp on the 2cv and not able to get onto the Tractions insurance policy until im 25. Not wanting to risk driving the 6H thrid party I took the 2cv. Despite being in a line of 18 Tractions it coped very well, often beating the Light 15s up the hills

The run was excellent, very scenic, taking into account some attractions, 3 stopping places and some of the most steep and twisty roads around. It was great fun! 220 miles I did in total and the 2cv never put a foot wrong, a lot of fun, we were in hysterics quite often

A picture or two of from Sunday: 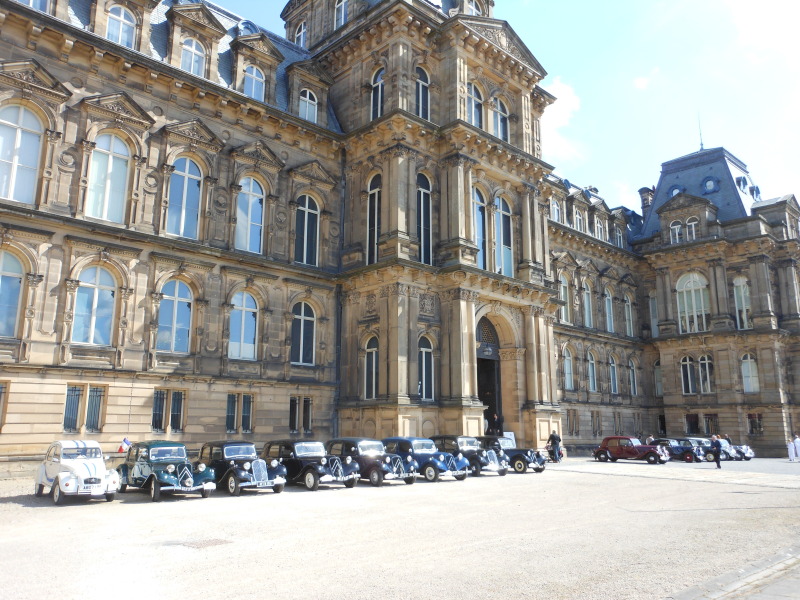 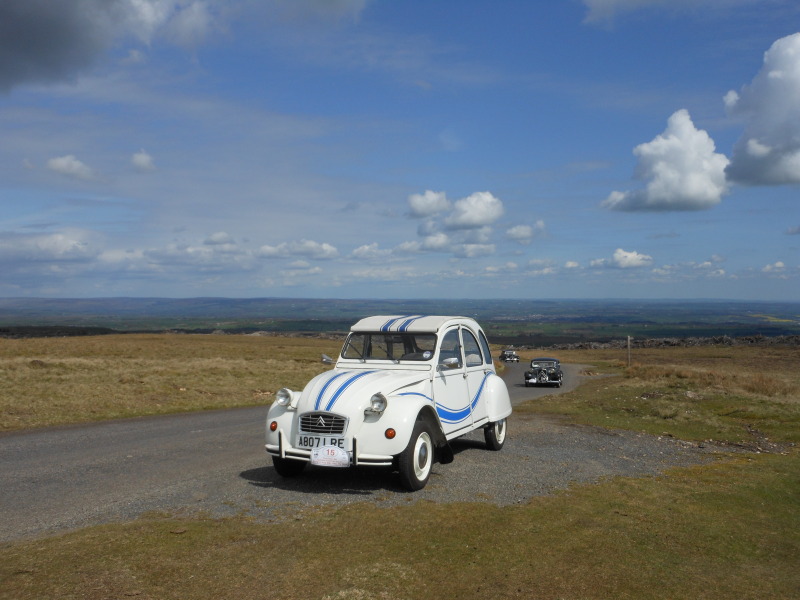 We did have the Traction out the other day for a run around and its going well. Both the Traction and the 2cv passed their MOTs last week without an advisory in sight.

I can say that the 2cv is very very soft in its ride now, the roads were quite bumpy but not hugely felt in the 2cv. It looked to ride better than the Tractions on most surfaces. However the degree of body roll was commented on by a few, I was certainly trying at times, evident from the noise of the front mudflaps brushing the ground (they are about 5-6" from the road normally!) of some corners! I took the satnav with us and it reached 76mph at one point, the speedo was showing ......... 77/8mph!

I didn't think it would have been so accurate. It doesn't really feel like 76mph though, it feels more like you have passed through the sound barrier and going for the land speed record.

Its getting constant tinkering, the other day I did a bit with the interior, gave it a good cleaning, removed the radio (what is the point of a radio in a 2cv!?) and speaker and gave it a general tidy. We also set the suspension height again and gave it a service ready for the weekends run out.

Today sees the end of a spending spree on the Activa for a while, its got everything it needs for now and more. I have spent around £1,000,000 (read over £650) on it in the last month. Ive been keeping a bit of a record on its costs, think ill stop adding it up now, its quite a large figure

Today it got its replacement bottom radiator hose and fresh coolant, to follow its radiator replacement a couple of weeks ago. The hose gave me a bit of a surprise at £77, but not too bad.

The Activa is behaving itself well, I can't think of anything it needs next, mechanically. I have no doubt tempted fate there!

Its still surprising me in the way it drives. I have sourced a pair of Activa alloy wheels from Robert, which arrived recently. I originally wanted one to replace the spare wheel which was a VSX alloy and I have now passed that onto davewithington. Since the Michelins I had on the front were aging badly I removed them and fitted these two spare wheels which came with 'Prime Well' tyres with around 5mm of tread. Now, I dont usually get on with budget brands but these are an improvement from the Michelins. Dry grip is much improved, they seem to flex less under heavy conrering and wet grip seems better. They will not be staying though and new tyres will be bought at some point. For now these are servicable and quite decent actually, though I dont see them lasting long. Ive only used the car twice since fitting them and the edges are looking quite shaved already. I have no idea why that could be

I'll be very glad when May is over, too many assignments, a pretty intense exam on Thursday and a 5 day field visit trip with assessments in a weeks time. Plus a drive down to Northhampton and back in a day to attend a training day for work next week. To top it all, im a year older as of tomorrow. Im thinking there might be a perk to being 25, in that my car insurance will lower, ive been getting quites as its due this month and nope, its just getting more expensive!

Happy birthday for tomorrow Chris. It was my twins 21st yesterday.

Sorry to hear your Dad isn't a hundred per cent, give him my regads.

I went to the Canardly's meeting last week which was interesting but I was the only one who actually turned up in a 2CV. Having refurbished the driver's seat and having some work done to improve the stiffness of the driver's door has improved the driveability. Next up is finding out why the light stalk is getting so hot...

Good luck with the exams etc, hope to see you at Wetherby.

I was looking forward to seeing those Traction/2CV photos, they look smart

Wish you all the best for the schooling and happy 25th

Thanks Rob, though it'll be a day full of revision and then work

I will do Rob, we are waiting on the results of yet more tests/scans, hopefully they will find the cause.

I keep forgetting to go to that, I have been three or four times but only ever seen two 2cvs there. One is the one we bought and the other is Tims. We will try and make the meeting next month.

Thanks again, I'll look out for you at weatherby.

Thanks Kev, I'll be pleased when its the summer break, Weatherby marks the start of it

Ill be working the summer but I don't mind that.

Sometimes mine is the only 2CV there as well.
Rob - sounds like you've still got the infamous dim/dip system on your car. You need to get rid of it. It's a simple mod, I can send you the details if you want them.
Chris - I would be interested in seeing this mod to the front arms. Is it really that effective?

Yes, the ride is much improved, it does roll quite a bit more, though my dad tells me its how earlier 2cvs were. It just gives more leverage to the suspension and so a softer ride. Its just like fitting arms from an earlier 2cv, as we have put the hole in the same place.

Hopefully the 2cv will be at the next Canardly's meeting.

I hope things go well for your dad Chris . Some more nice pics as always , happy birthday too

Just looked outside, I wonder if people passing by think we like Citroëns: 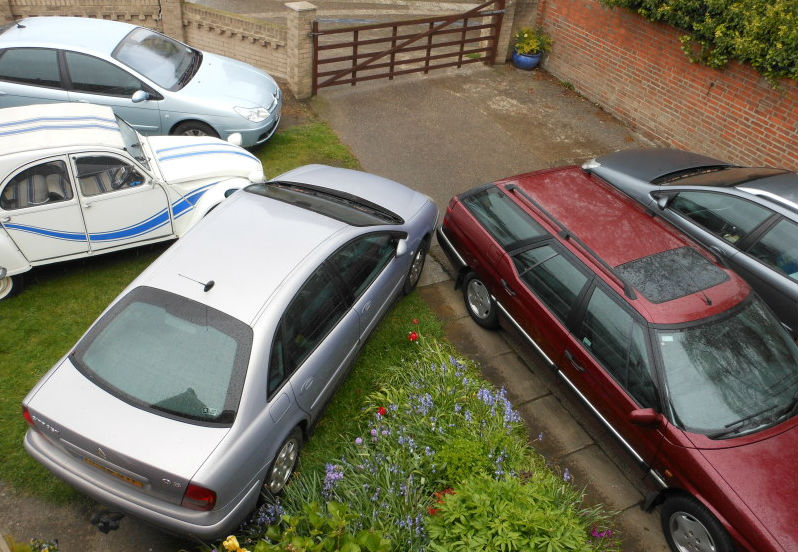 Hi Chris,
Thought I'd register on this forum & see what's going on, in the land of green balls!

That stripe on the beachcomber is still the wrong colour!

After the Wetherby rally, the 2CVGB Registers day/weekend is next (for me anyway). July down at St. Ives in Cambridgeshire, great site and great event - interested?
Top

Hi Tim, I guess you have been speaking to John?

Hey, the stripe does its job as a stipe

At least it has a full set of matching ones now.

Yeah, we might be along for the Registers weekend, it does sound like a good event.
Top

Citroenmad wrote: Yeah, we might be along for the Registers weekend, it does sound like a good event.

Are you up to camping? There may be beer (well, actually there WILL be beer!). . .
Top

Might well be up for camping, we will have to see.

Might have to get a smaller tent for it, the one we have completely fills the Xantias boot, I doubt the 2cv will handle it

Citroenmad wrote:I doubt the 2cv will handle it

You'd be surprised, I find I can get the family with all the camping gear in the 2CV easier than the 'moderns', all that lost space under the seats for sleeping bags and roll mats!

I do have a boot extension though !
Top

I don't know, its filling one end of the conservatory at the moment and is in three bags

Im sure we will be there for the Register though, might well be three of us, perhaps.

A 2cv, three people, a tent the size of a hotel and weighing more than a caravan, plus luggage and 400 motorway miles. Sounds interesting

Im sure we will be laughing all the way, it usually has that effect

Citroenmad wrote:I
A 2cv, three people, a tent the size of a hotel and weighing more than a caravan, plus luggage and 400 motorway miles. Sounds interesting

Im sure we will be laughing all the way, it usually has that effect

Smaller tent required then! We've done all the big tent, tiny tent, stuff over the years and now have a big pop-up tent, with a big canopy on the front. 13 year old Harry sleeps in his own pop-up. Although these sorts of tents are quite bulky, they fit on top of the boot extension and up to the top of the back of the seat. Couple of single gas burners for a brew and we're sorted!
Top
Messages: 1849