Haha I'll have to give a Smart a go!

Hmmm, from experience, probably the Tata Safari is the most hateful car I've ever driven. Steering wheel isn't even directly in front of the driver. Ssangyong Rodius is another.
Top

lexi wrote:Lots of C5ing there Chris. I have a hunch that I may end up with one of these as a tool......I'll rephrase that !

Indeed, they are a very good tool!

Its one reason I have a C5, as its such a good all rounder for what I need from a car. I do like C5s, pick wisely and it should prove to be a good choice.

Yes, much bigger than a Xantia, really think more XM size. The boot is quite huge on the hatchback and massive on the estate, every so slightly smaller than an XM estate but still very big. Rear legroom is better than a Xantia but not quite as good as an XM. The Facelifted C5 hatch is the same length as an XM hatch ... For a load lugging car, there are few better.

I had a load of weight in my C5 yesterday, the people loading it were very surprised when its suspension levelled. Excellent!


Luke, Id hate to drive a Tata Safari, what a thing, you can tell just by looking at it that its going to be thrid worldly.

You should try a Smart, if they had a better gearbox I might well of bought one as a runabout as they are fun. One I drove was tuned, it had way too much power for a Smart in my opinion, quick mind. The most enjoyable was a very early LHD basic Smart Coupe, I thought that was great!

I have a real liking for well thought out, well designed small and basic cars.
Top

So if I got a C5? Are there any support groups available for the "flock gone mad seats"

Like how do you de ionise your trousers after a long run? If you went into newsagents and another C5 driver was in the queue, you could get stuck together

Are these ones just the basic low spec type?
Top

It really depends what spec you go for, in my opinion Exclusive seats are the worst, they look like they have been made from an old sofa, the material is very dated. The SX, which is really the one to aim for in earlier C5s, has a plush seat fabric but again, it could not be called modern! The LX has basic looking seats with basic fabric. Later S1 C5 VTRs have quite a nice blue suede and tough grey material which I liked. Facelift C5s have far nicer seat fabrics, much much more modern and not at all static inducing

If purely practical reasons, the SX has the best interior, it seems the best for wear and its the easiest to keep clean too.
Top

First I have heard of the static problem in a C5 - I've never had it in mine in six years.
I do have problems with static recently too as I can't use fabric conditioner and my clothes all stick to me like glue. Still no problems with the car though.
Top

Well that is one job off the Activas list, the exhaust is now sorted with a new good quality centre pipe and some of the pipe from the cat has also been cut out and replaced. So no more blowing exhaust, which has improved the experience somewhat. I had a slight panic with the immobiliser after the exhaust fitter put in the wrong code too many times the codepad locked out. We had to push it into the garage and then I had an anxious wait until the exhaust was done to find out if the car would start. Of course it did!

Ive also got the new inner ball joint and collected the tool to remove it today, so I plan to get that fitted on Saturday all being well.

Found a bit of snow on my travels today: 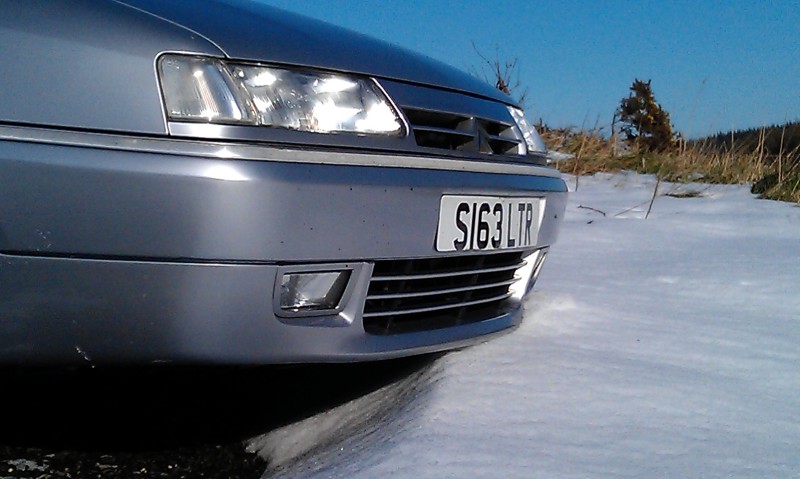 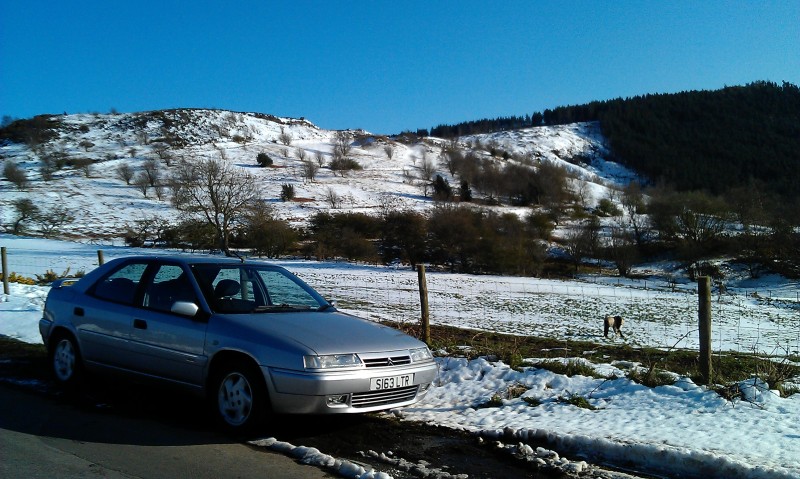 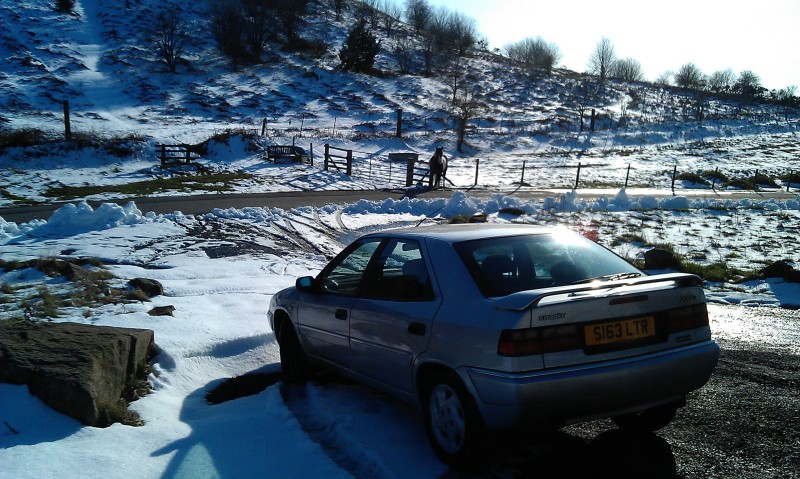 Everyone who has a car seemed to be on the roads today, they were packed, I must have spent about an hour and a half in various jams just through traffic volume. So I avoided the busy routes and took the back lanes, no bad thing in an Activa, I had a very enjoyable day driving the Xant, made my day in fact

The Xant got filthy after its grueling day, it was covered in flies and muck, so ive just finished giving it a good cleaning. Shiny again!

red_dwarfers wrote:Glad to hear you managed to get the Xant out of the exhaust place

Me too, I had a busy day to get on with, it had me a little worried

There was up that way, up on the hills towards the moors but everywhere else is nice and dry, quite warm too actually. The night before last and a little further over the moors from where I was today there were cars ditched and abandoned in snow drifts with tractors clearing the roads

Thanks Jim, shame I didn't have my camera with me but my phone hasn't done too bad.
Top

Where were you Chis?
There wasn't any snow here yesterday but I could see plenty of it up Consett way.
Top

myglaren wrote:Where were you Chis?
There wasn't any snow here yesterday but I could see plenty of it up Consett way.

That was up onto the moors Steve, just the other side of Great Ayton.

It had been a bit stormy but it soon passed out to sea. 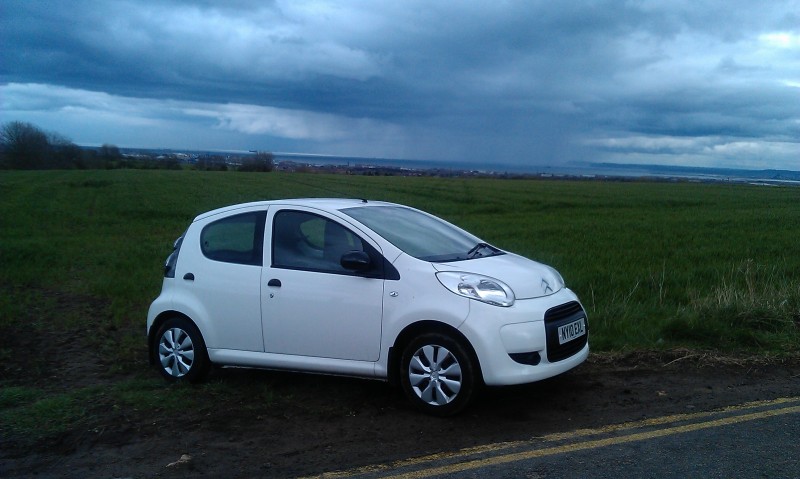 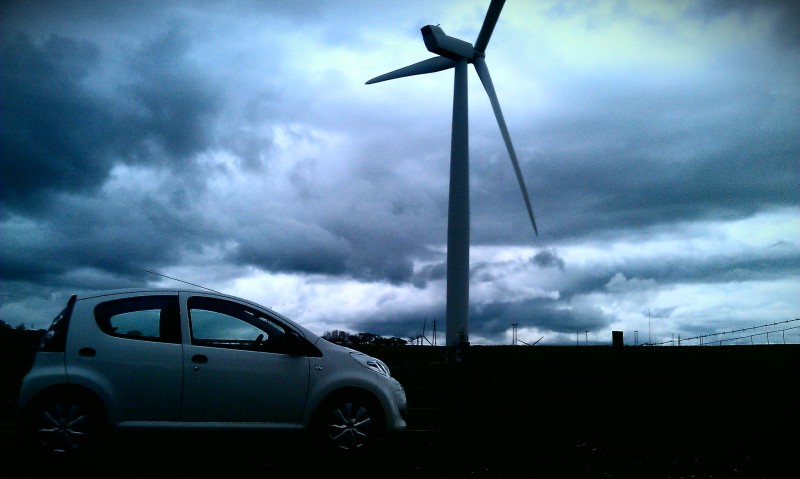 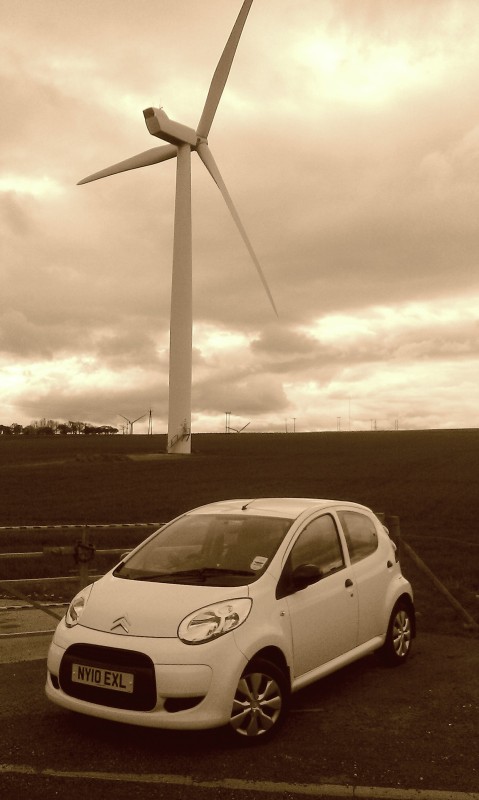 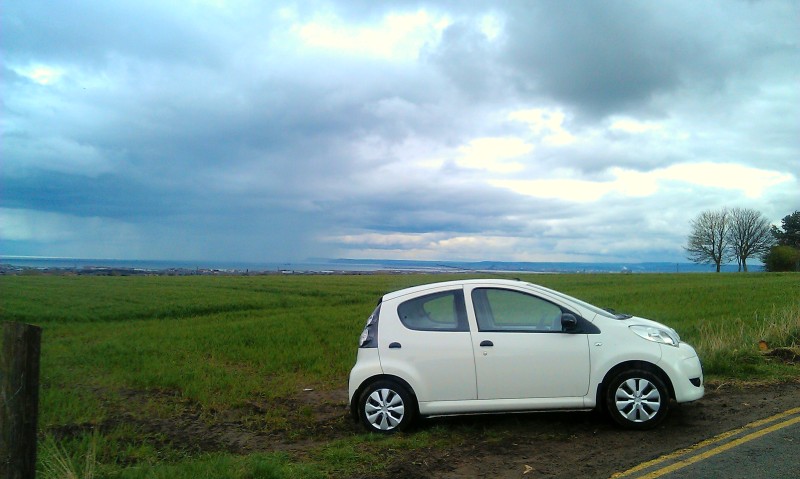 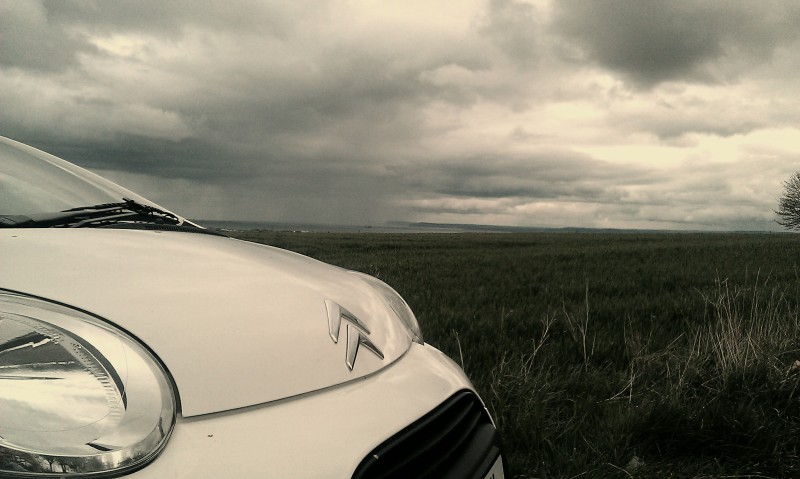 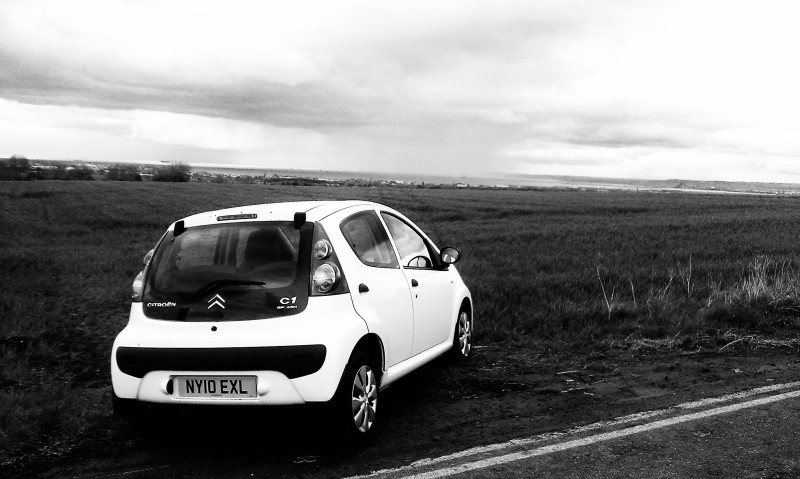 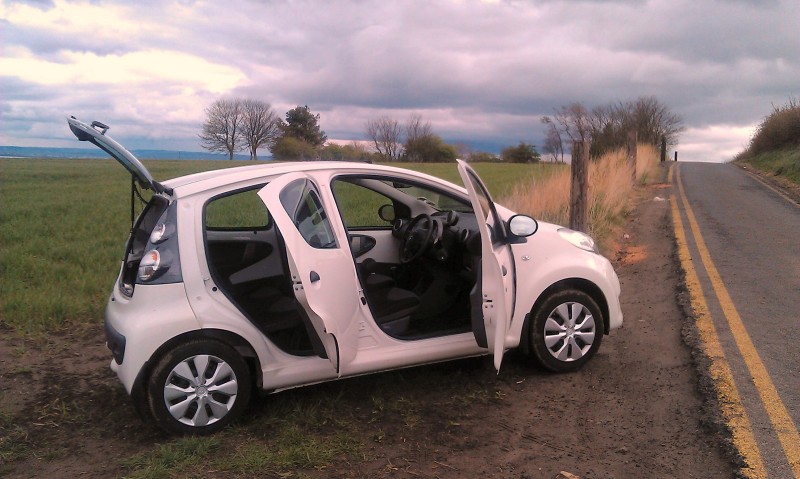 Great pics of the C1 , White really suits it

Thanks Mark, I don't have many pictures of it so I took the opportinuty. Its a great little car, Im often driving it around town as its ideal. The ride has got a lot more supple over its 9K miles and its actually fairly comfortable for a small car. When it was new the ride was almost unbearable! Now its good and with 4 people in its very soft

I really enjoy driving it, the engine has a lot of character, the exhaust has a very pleasing note for such a tiny little car and it does long runs well too. Ive done around 500 miles in it these past two weeks and its been great on motorways, surprising as its only a tiny little city car. Id really recommend one and there can't be any modern car which is cheaper to buy or run than these, its super and its symplicity is very appealing. Im very attached to it

Well I did have a go at replacing the inner ball joint on the Xantia, my failed attempt can be read about here and it is still fitted to the car

Though now with no protective rubber boot so the car is pretty much unusable. I was having such a bad day and nothing seemed to be going right, I couldn't even manage to get the TRE off the C5 at first. So I admitted defeat with the Xantia and I just want it done, not rattling and sorted. So its going into the local Citroen indy on Thursday to have it removed (hopefully, though it was their tool I borrowed to do the job and it was of no use, so we will see how they get it off) and the new inner trackrod/ball joint fitted. I have also asked them to fit the radiator in the hope that they know what they are doing more than me and it was not something I was looking forward to doing. So, if that all goes well, it should be sorted and all the better to use over the summer months, or that is the theory!

I did get the track rod end changed on the C5 though, despite my initial struggle of slackening the lock nut on the track rod, it only took 20 minutes to change. So that sees the C5 perfect again with not a single issue now, no doubt its thinking about annoying me again soon with another costly repair (not that the TRE was, think it cost something like £10 for a good quality replacement), for which I have a handy box of matches and a can of petrol.

I was going to bring the Xant to the X Rally today, however that didn't go to plan for the above reason so I brought the XM instead. Certainly not a bad thing!

I gave it a bit of a cleaning yesterday and a good check over. Despite not being used for a good few weeks it has done the 370 mile round trip to the rally and back without fault, an excellent car to drive, got me thinking why do I have a C5 when its nothing like! In fact it was such a nice treat to drive I could easily have driven double that. Its about a year since it did anything over 100 miles in a day and so I forget what lovely things XMs are on a long motorway run. To be honest going in the XM really contributed to me enjoying today so much, I can see me using it for the rest of the week now

It was a very good run down to the rally, me, my dad and Steve (myglaren) met Steve (Trainman) at about the half way point and went in convoy for the rest of the trip. Quite annoying having to follow or be followed by a C6 for 80 miles as it reminded me of how much I like the shape of them

Sorry if he got talking about spheres to anyone

I have to say after today and looking at CitroenCrazy's rather nice HDi Exclusive estate Xantia I like the idea of having one. It would have to be an Exclusive as I like hydractives and also want a try at living with leather seats. However, im hoping this feeling will pass

The Xm after its clean, amasing how much its Magenta colour changes depending on light availability. 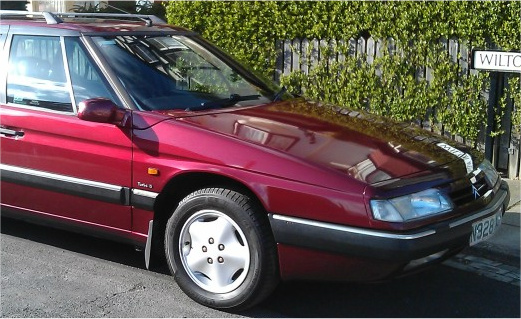 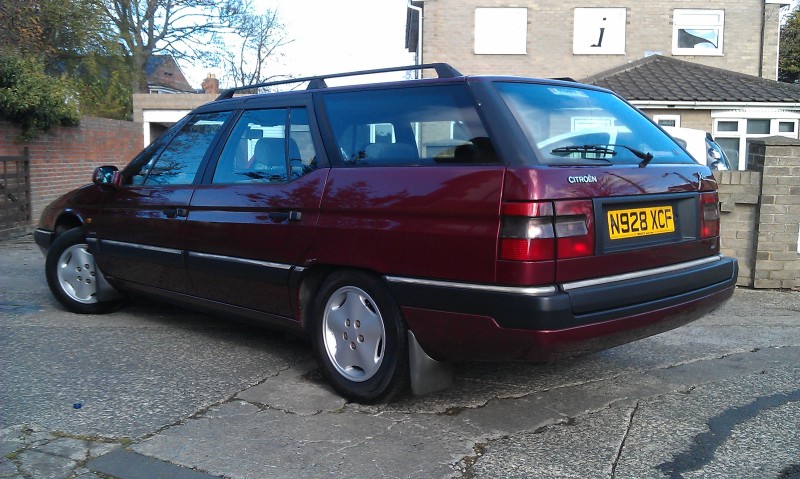 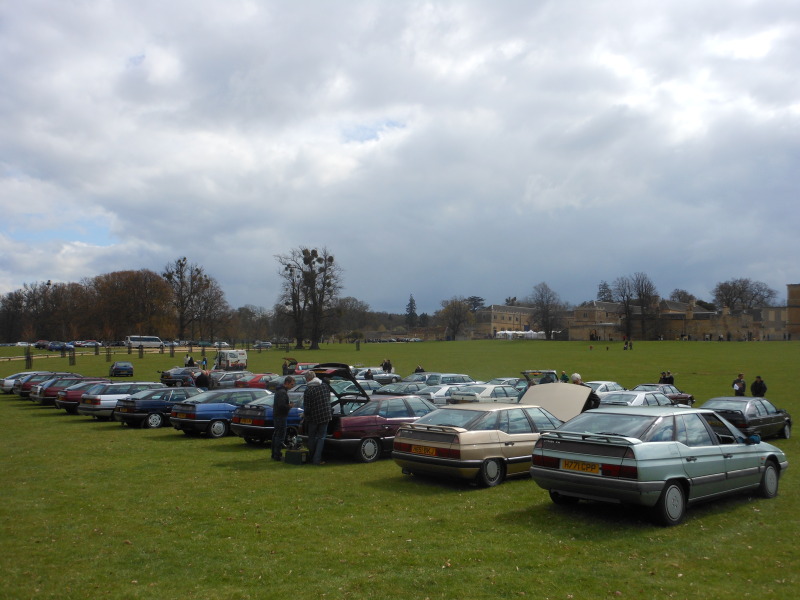 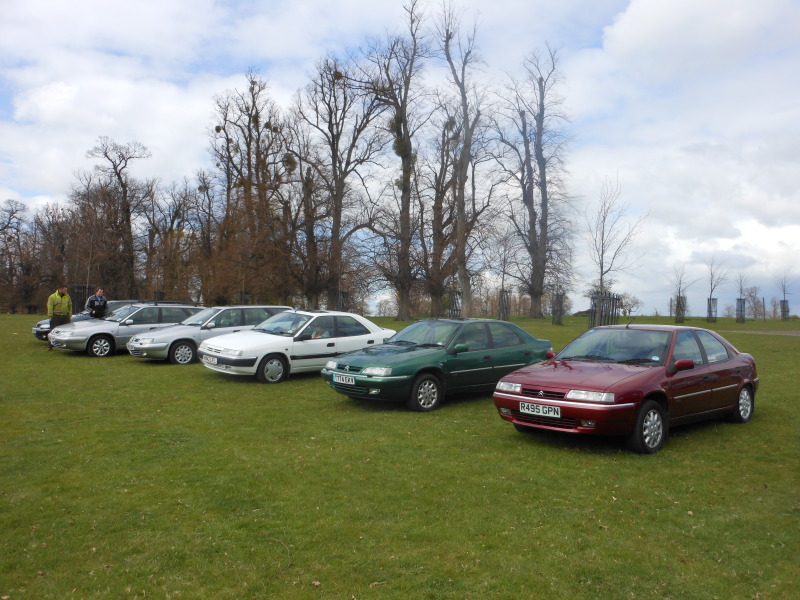 I took these a few days back, fresh after a good clean: 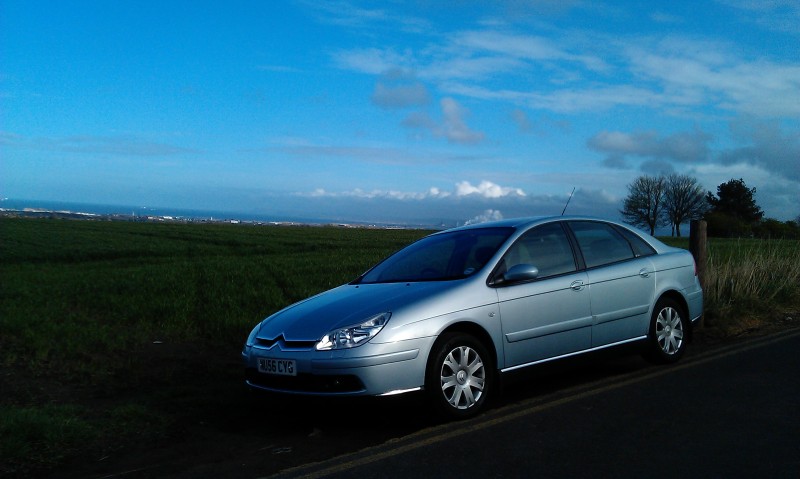 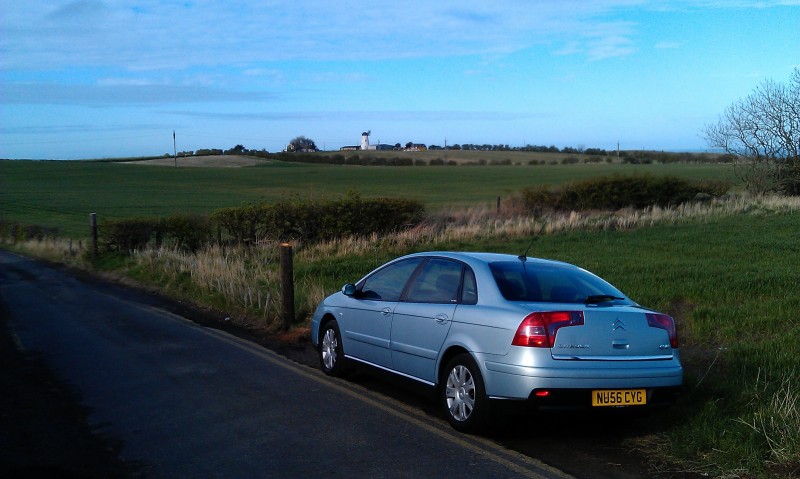 Im attempting to go through the advanced driving test with the IAM, so I keep going out for drives to practice 'good' driving in my spare time when im not in rush hour traffic and rushing about. Ive not had my first observation yet, its due soon, but im looking forward to getting started with it. I like a driving challenge!

In 2cv news, its almost back together from having its front arm bearings, wheel bearings and king pins replaced. It should be an improvement as they were quite worn actually. Its due its MOT this month, hopefully it will pass but you never know! The Traction is also due its MOT this month, im sure that one will be fine though.
Top
Messages: 1849