Robyn tells me she got sunburned on the beach today. In March!!!! Remarkable...
Top

CitroJim wrote: I want to go and see the Giant's Causeway one of these days...
.

CitroJim wrote: I want to go and see the Giant's Causeway one of these days...
.

Don't bring your Acitva over here Jim!! They don't last long when they come into my yard

Robyn tells me she got sunburned on the beach today. In March!!!! Remarkable...

Ive cought the sun today while doing water surveys down Derwent river in Northumberland, it was an excellent day for it. I think I saw 23 degress on the car at one point, in March!

On the Activa front, ive got three jobs which need doing which should see it right, as there is nothing else I know of which it needs after them. Those are:
- (I dare not mention it now as ive put it off so many times!) Fit the new radiator which should improve its cooling, as it does like to run a little warm when in traffic but soon cools down once the fans come in or when driving.
- Exhaust - centre pipe is now rusted and blowing slightly, its also not correct for a TCT and neither is the back box, what a struggle I had getting them to fit better last summer. So they need replacing, im going to see about that tomorrow morning, hopefully.
- Knocking noise on front NS wheel - I think I have narrowed this down to possible wear in the steering rack, though im unsure and so would like a second opinion on that. Im looking forward to getting to the bottom of this and getting it repaired. Its stopping me from using the car much at the moment.

Though the above three things are detracting from my enjoyment of the car at the moment, so I need to get those sorted as soon as and I can begin to enjoy it again. After that it should be well sorted mechanically, I hope.

I plan to get the alloy wheels refurbished at some point, and have a couple of spares on the way to use as a spare under the car (to get rid of the VSX alloy it has there) and one to have in stock, just in case.

Are you going for OE Chris or aftermarket type bespoke system as they may be about the same price??
Top

KP wrote:Are you going for OE Chris or aftermarket type bespoke system as they may be about the same price??

The place im going to tomorrow is an exhaust specialist and they make exhaust systems. Though I only really want OE spec, im not sure what can be done without making it noisier. Had thought about a straight through pipe from the cat to the bax bock, to get rid of the centre box.

you can have whatever noise level you want, dont get a straight through, you will never be able to use it on the motorway again if you do.

No and I like it quite, standard it is, I much prefer OE stuff.

I really need to find time to get my Activa sorted out.

Well, all it needs is a centre section, rear box and a bloody Activa ram. It's only done 50k miles too

Thats something im in short supply of recently, free time to spend on the Activa. Though the rad and exhaust are easy, so it shouldnt take much effort getting mine right again.

It is but the foam on the edge of the drivers seat has already collapsed.

I did go to the exhaust place today but they were very busy so I have booked it in for next Tuesday morning to have the new exhaust fitted.

Im pretty sure the NSF wheel knock is the inner ball joint, I asked at my local Citroen indy and they confirmed it to be likely. They also said there is a special tool needed to remove them, ive never done them before, however he said I can borrow it should I want to do it myself.

Ive done my commuting in the Activa today, 130 miles or so. Enjoyable as always and its nice to see the regassed air conditioning still acting like a refrigerator, very chilly

With the AC on all of the time, its done around 27mpg today.
Top

Had a bit of a car afternoon on Saturday getting a few jobs on the cars done.

The front brakes on my C5 were binding very slightly when warm, so I stripped those and cleaned them up. Now I confess to having not bothered with the front brakes myself in the 14 months and 22K miles ive had it :|I have done the rears though! I suspect they had not been touched from new, having a low mileage I guess they were never touched on previous services and its not something I got round to on my servicing either, I will from now on! The pads were so tight in the calipers that I had to resort to hammering them out with a screwdriver to act as a chistle. The calipers are not very rusty at all but just full of brake grime, so I spent a good while cleaning them up and now they are as free as a bird. In fact the brakes feel more sensitive now.

I also replaced the NS drop link as there is a very slight rattle from that corner which is usually drop link related on C5s. Very easy to change as its virtually corrosion free on the underside. I often have the problem of rounding off the allen key head in the ball joint, but these were extremely free moving and the lower one I took off by hand after initial unslackening. However The drop link I took off was perfect, a little slack but the ball joint boots were perfect and no play was to be found. I put the new drop link on anyway. I then found that the track rod end ball joint cover has dropped down allowing muck and water to get in and worn the joint. SO I have one on order. I suspect its an aftermath issue from the clutch change, as the subframe had to be removed its possibly been overlooked when putting it back together again.

The 52 C5 SX was also suffering from a sticking handbrake mech on the os front caliper. I know from past experience that trying to free off the handbrake mechanism on the caliper by feeding in lubricating oil is only a short term fix. It initially feels very free but after a week or two its back to sticking on again. I had this problem on my previous C5 and almost set fire to the brakes when it started binding at motorway speed. The discs and pads were totally ruined on that one so I didnt want the same on this. I tried this with this one but it wasn't having it again so we fitted a new caliper, the only real solution unless you want to try and strip the old one and see if it can be saved.

After that I had a better look at the Xantia and can confirm that it is the inner ball joint on the ns which is worn. A new one is on order and should be here Thursday hopefully. Im going to have a go at fitting that over the weekend, all being well ill give the radiator an attempt too. Failing that my local Citroen indy will be called upon

After that I helped my dad removed the front suspension arms on the 2cv. The King pins are slightly worn and so will be replaced, probably have the arms sand blasted and painted and new front wheel bearings at the same time. A very easy job to remove the front arms, took hardly any time at all. The front wings are held on by 4 bolts and remove in seconds, excellently usefriendly. 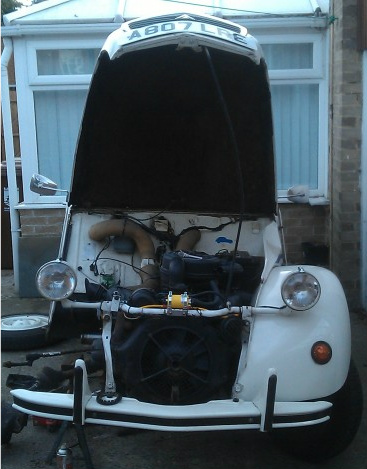 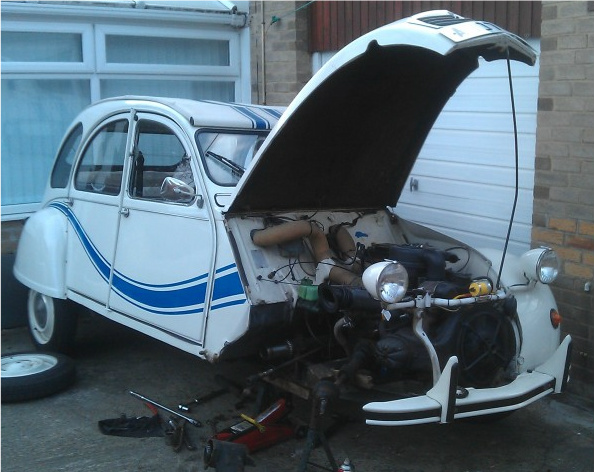 This evening ive been having a go at adjusting the headlights on the Xantia, they were far too low and both pointed to the centre of the car, giving a very limited light range. Now they are 10 times better, with a nice even spread of light and less need for full beams at every opportunity. Im quite impressed as I had been thinking there are worse than XM candles. However, this headlight adjustment did take almost 50 miles to perfect, or maybe thats just because I was having too much fun driving

The NS side inner balljoint is possibly the easier one of the two to do so you're in luck there...

All best on the radiator. Take it slowly and use all the advice I've given on this job and you'll be fine. No need of an Indie for that