DickieG wrote:Here's a link to a Beachcomber with loads of piccies.

Its quite nice that one, though the stripes on the bonnet are not quitre right and those seat covers are nothing like the originals. Mind, they are not too bad actually.

Some are tarted up to look like a Beachcomber ...

Yes, it should prove to be a very fun car Jim, im looking forward to driving it

I always liked driving the Renault 4L we had, until I drove another 2cv recently no other car put a grin on my face like that car. The 2cv is similar with the grin factor, better I think.

The 2cv is similar with the grin factor, better I think.

Grin factor, I had that yesterday, CX GTI Turbo 2!! I think you would like one Chris!
Top

The 2cv is similar with the grin factor, better I think.

Grin factor, I had that yesterday, CX GTI Turbo 2!! I think you would like one Chris!

Still too serious ...
The grin factor with a 2cv is just pure silliness

A Visa Piggy Pot would definitely have the grin factor!

Add Maikonics to a CX GTi T2 and you get

We went over to collect the 2cv last night, its fantastic!

The engine seems very nippy, I didnt expect it to cruise at 75 so effortlessly. It was a true 75 as our C1 was following. There is a 'small' amount of noise, as you can imagine, but its not too bad! Also quite amazing when you chuck it into corners, just lots of grip and even more roll, more than our old R4. So far I really like it, such a laugh to drive, look at and be in. I really am looking forward to the better weather and taking it to some 2cv club runs. Mind, I might just venture up to the Tan Hill one in Jan.

Ill post up a few pictures when I have chance to take some.
Top

Here are a couple of pictures of the Beachcomber, not great weather today so the pictures are not brilliant. Hopefully there will be a nice day sometimes soon and ill get it out to some nice scenery for some better pics. The winter grill muff was already fitted. 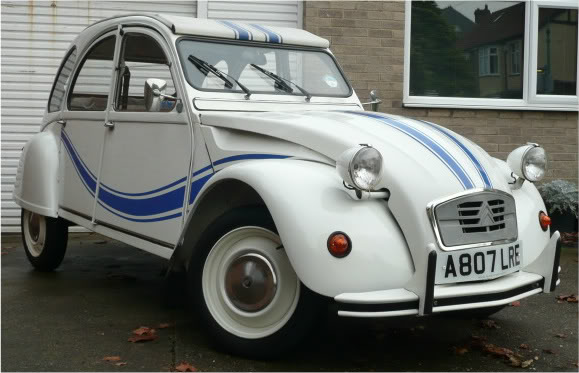 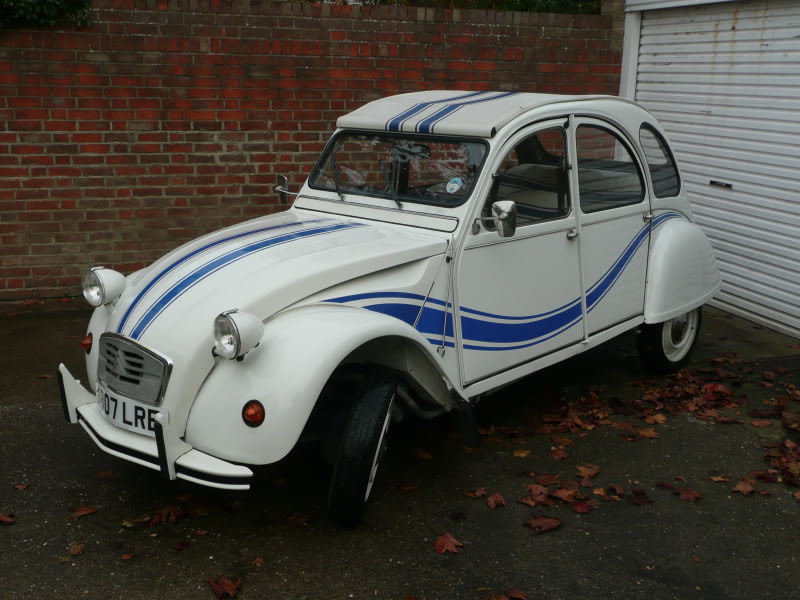 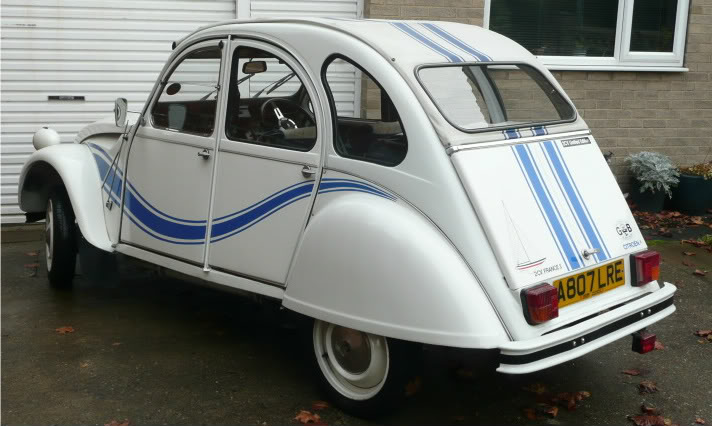 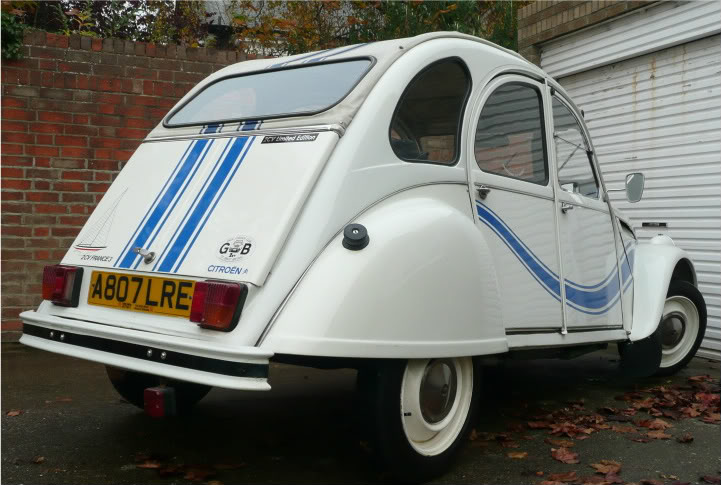 I've been pottering around town in it this afternoon, it really gets lots of attention, possibly not all good but you never know ... Its great fun to drive,, every trip seems like an adventure at the moment.

It won't be getting a lot of use this side of winter as the roads are already getting damp, it will be garaged for most of the winter. Im really loking forward to next spring when we will be able to use it for pottering about, with the roof back!

Saying that I might take it down to 2cv City sometime soon and also I like the idea of doing the Tan Hill Raid with the 2cvGB club in January, would make a change to do it in a 2cv

There are a few little jobs to be done:
Fit a Harley coil to replace the original 2cv one - they are less than reliable.
Fit two new Michelin X tyres to replace the worn Firestones on the front.
The drivers side rear wing decal is missing, im sourcing one of those to be fitted.
Few other bits and pieces but its a good one.

Im off down to the NEC on Saturday for the Classic Car Show, its usually a very good event.
Top

I would have that Chris. Very nice for lulling around in and working on and true classic.
Top

She looks an absolute beaut Chris...

Do you have to have the roof open to drive it though Chris or can you see through the windscreen okay?
Top

Thanks guys, she is a good'en

I hear 2cvs often have names, though it doesn't at the moment and im not one for naming cars. My sister has given it a name, though its not been christened it yet, I don’t like it

Not quite Kev, I can see out of the windscreen fine, and fit in the back with ample room, quite surprising given its size. Mind it was kind of built for space ... in fact it was built to carry four peasants to market with 50kg of weight and drive across a ploughed field without breaking any of the eggs it had on board.

I went down to the NEC yesterday for the day to see the Classic Car show, very good it was too, some truly excellent cars on display. The CCC stand was quite good, I don't normally 'do' CXs but the CX Safari which was on the stand was totally stunning, its the one featured in the Citroenian having had a lot of work. There was also a H-van on the stand, Len Drews museum piece DS, Mike Harkers GTi Visa and a very nice white GS. Opposite was the 2cvGB stand, another nice show or cars with a fantastic 2cv Club in Blue Lagune and a very nice red Ami 8 too. The Traction Owners stand backed onto the CCC stand, a good few nice Tractions on there. Renaults were much more involved this year, previous years there had not been many at all, this year was better, a very nice early R4L, a GTL and even the odd beach cabrio thing. I met a few people I know there and got chatting for a while, though as it was only a day visit for me I had to have a fairly quick look around the 5 halls and auto jumble. Coupled with a 360 mile round trip, it was quite a long day, though my C5 makes motorway runs very easy. I took a few pictures of the show so ill stick some up later on.

We stopped by a classic car insurance provider at the NEC show and got the 2cv insured for all of us, with an agreed value put on the policy and limited mileage.

In 2cv Beachcomber news ... today its been serviced, really was due for a good oil and filter change, naturally it got a Forte Flush through it too. We bought some nifty Lucas oil stuff at the NEC which improves lubrication and helps with wear. Someone we know had it in their van and said it made it go quicker, it was worth a go! Also greased the kingpins though I suspect they might need replacing at some point.
The 2cv doesn't like to start after its been stopped when its warm, its the coil giving up and so a new one is on order. Ive gone for a Harley coil which is much superior, gives better results and should last much longer. I drove a 2cv with one fitted and it seemed to pull very well.
Other than that its just been general fiddling and sorting out little things. There are things to do and sort with it, though it will get there.
Ive done a few miles in it today, its hilarious!
Im impressed with how strong the engine pulls, not anything like as slow as I had imagined and certainly more go than our old Renault 4TL. I was actually chasing a modern Fiesta up a very steep hill, couldn’t quite pass though! On the motorway its definitely an experience, again its quicker than I thought it would be, it does 75 without too much screaming (from me!) but you do notice your doing 75, well it really feels like I imagine 275mph would feel. The brakes are excellent, it being a disc braked version and weighing nothing means it really stops well and the brakes have very good bite to them. The gears are a pleasure to use, no doubt some people would struggle to find out what you do with the gearstick! ... The previous owner said she never used to lock the car, often would leave the keys in as "who would know how to drive it?"

Its just excellent fun! The most fun is had when throwing it into bends, throw it in and it rolls onto the door handles but it really grips. Im told it won't fall over, I hope not ... my dad used to rally his 2cvs and Dyannes way before I was on this planet. I grew up with my parents having (amongst other things) a bright yellow LHD Citroen Acadiane Mixte ... I was never going to be normal!

All in good fun and I actually can't help but drive it, it just puts a smile on my face and every other car seems so boring in contrast.

Ill post up some better pictures and interior ones too, probably later this week.

A bit more about it, it had came stacked with invoices, receipts and history for various places. It has a photograph history too, every year for the past ten years there are pictures of the exterior, interior and under bonnet. It also has published picutres from it attending a few 2cvGB club outings. There are manuals, spare parts and bits and bobs. It was used as the previous owners only car, however it was for very infrequent use and always garaged, living under rugs ... and a duvet in the winter! Its only covered 700 miles since April this year, so very low annual mileage.

The Beachcomber was a special edition which was based on the 2cv6 Special, it added the blue exterior strips on the sides, bonnet, roof and tailgate. It also had a matching interior which is white cloth with blue stripes, blue door trims and a blue hammock parcel tray. The Beachcomber has open style seat covers, harking back to very early 2cvs with their hammock style seats. The seat frames are exposed, unlike other normal 2cvs.
The Beachcomber was only built for two years, 83-84. Only 700 Beachcombers made it to the UK, 350 the first and the same the second year. It was to celebrate France winning the American Cup Yacht race in 1983. In France it was called 'France 3', for some reason our Beachcomber has the France 3 badge on the boot, it incorporates a yacht picture which can be seen in the above pictures. Im not sure why it has the French badge, it will soon have the right badge but ill be leaving that one on too, as its quite distinctive. No doubt it was added at some point during a restoration, though it is a genuine Beachcomber, I gather a few are not.

Parts availability is excellent for 2cvs, just about everything is still available, ive been on ECAS and 2cv City websites writing my orders

This one is standard, apart from a sporty steering wheel, which I think 2cv City put on. Ive added a blue striped number 10 pool ball gearknob, looks very nice in there!
Last edited by Citroenmad on 13 Nov 2011, 23:09, edited 1 time in total.
Top

Make sure the antifreeze is up to scratch

I tried, there is no coolent in it!

Oh dear - you should fix that quick

The cambelt has never been changed either ... lady owners!

Sounds like fun Chris - despite all the Cits we have owned over the years, a 2CV has never graced the driveway - and not likely to at the current prices!

75 though.... no way surely. Stated max is 71 IIRC, and then only with a following wind downhill! Unless it's got a Visa engine (or perhaps a high comp Dyane engine)