Citroenmad wrote:
I really enjoyed experiencing a couple of other Activas today, its interesting to see how they all differ despite them all being good examples. Most interestingly was a drive in Jims very nice Activa to discover what a standard TCT Activa performs like. The manual boost contol on my car does appear to make a huge difference and really transforms the car. Interestingly mine seemed to have a broader power delivery than another Activa fitted with a manual boost controler, with mine starting boost lower down the rev range
.

Ah, that will be the subtle mods i made to the MBC

It was a good turbo on that car for sure, the actuator was shortened slightly which helps pre-load and keeps the wastegate tight, an essential thing to do on an old, untouched set up as the spring starts to weaken with age. It also helps the top end too, this could explain the differences between another car fitted with an MBC.

If you keep the car long enough, do consider a good stainless system with a bigger bore, it doesnt have to be loud but dumping the original exhaust for one with a 2.5 inch bore and one very good free flowing silencer should not add too much boom but will help release the bhp's and torque across the rev range.
Top

That top balljoint was worn alarmingly

As you say Chris, it was all down to a hole in the top of the gaiter and thus water ingress and no grease...

Your's really goes well Chris and judging by Dean's a swap of exhaust will give it a little more too as you suggest Gareth. So yes, I agree the exhaust route and maybe a recirc valve too...

Against all the modded Activas, mine now feels as flat as a pancake...

Yes, it does go very well

I have just been spending some more money on it, a Valeo radiator and new bushes for the front suspension arms are on their way to me.

The radiator is not leaking but its looking old and crusty, plus its not doing a fantastic job of cooling so im going to replace that. Sounds like quite a job to replace but im sure (hope) I can manage that

The 'P' bushes are worn on the front arms so that is my next job, along with fitting the rad.

After that, there isn't really a lot else it needs doing, some slight cosmetics maybe (wheels re-done etc) and it will be about where I would like it in terms of mechanical and bodywork condition.

Im just on with installing my Lexia to an old laptop ... will see how that goes

Citroenmad wrote: Im just on with installing my Lexia to an old laptop ... will see how that goes

Citroenmad wrote: Im just on with installing my Lexia to an old laptop ... will see how that goes

Then why did you buy one

Whats up with it Chris?
On mine it took a good hour and 20 or so to install and thats a semi decent dual core setup.
Top

Citroenmad wrote:I have just been spending some more money on it, a Valeo radiator and new bushes for the front suspension arms are on their way to me.

The radiator is not leaking but its looking old and crusty, plus its not doing a fantastic job of cooling so im going to replace that. Sounds like quite a job to replace but im sure (hope) I can manage that

When embarking on a radiator change with an Activa budget for a new bottom hose as it has bayonet fittings which corrode and get stuck in the rad leading to the destruction of the hose end fitting. TBH its a pig of a job getting to the bottom hose and removing it.

Unless the radiator is leaking I'd be inclined to leave it bearing in mind the above, as for the lack of cooling pull away the radiator from its clips so you're moving the rad towards the engine and you may well find that the front of it is blocked with debris, a long vacuum hose/nozzle is handy for clearing that away. All CT Turbo engined Xantia's run hot so don't be surprised when you see the temperature rising as soon as you stop in traffic.
Top

The Lexia did take a little while to install, about 40 minutes or so. However it was playing up, I have it sorted now though and have got the knack of getting it working again when it doesn't

Im quite amazed at what it can do with the C5s, every single thing it can operate, from the windows to pretty much every electro valve, solenoid, and motor.

I first tried it on the eldest C5 (didn't want to break my own!) and it threw up a good few faults, things which I had fixed but not got the codes cleared for. A few were in the injection menu as it had a new MAF and the leaking intercooler seemed to cause issues too. Now its all fixed and now the codes are cleared. I took it out for a good Italian tune-up and it appears to be nippier, quite a stormer for a 110 HDI (which in my experience of C5s differ hugely from car to car) and no fault codes when I checked it on return. The country lane drive did highlight a very iffy front tyre which seems to have distorted resulting in a very odd feeling through the steering wheel, ill need to get it some new shoes pretty soon. I have never been a fan of its Goodyear Excellence tyres, ill be glad to see the back of them.

I then set about with the C5 estate, where I had a deeper look at the Lexia, it can operate everything! Relays, AC unit, EGR valve flaps, Turbo solenoids, FAP additive motors, ran fans. So many things which it was clicking and whirring through. That did come up with a few fault codes but nothing major, everything cleared. I did find the option for regenerating the FAP too, though I resisted that. Doing a test of the horn (which does stay on a while!) was enough to worry my neighbours at 9.00 this evening, never mind it doing a FAP regeneration

It seems to take a note of how much elyos fluid it has injected over its life but not what remains in the tank, though its not low. The button on the C5 Estates glass tailgate has broken, it had a wiring fix a while ago but has stopped working since, the Lexia pops it open which suggests its the switch which needs replacing. The workings for the ESP and ABS can be tested and felt. All kinds of things it tests, I was flicking through the menus for hours

I was trying to fiddle with the ride heights but I have not worked that out again yet, everything I input is out of limits. I have tried this on another Lexia but can't remember what figures were used to adjust it now. I was playing about with the actuators, letting the car right down depressurised (goes lower than 'low' on the suspension button), the front and rear can also be let down independently etc.

I tried it on the Xantia too, which seems in very good health with just one warning due to the manual boost controller it has fitted which makes the standard sensor redundant.

Ill have a fiddle with it on my C5 tomorrow and see how I get on with that, should be fine but you never know.

Once I get a bit more used to it then ill be offering my Lexia on the register.

Thanks for the tip about the radiator Richard, ill take a look at that tomorrow and see if there is debris in front of it. I still want to replace the radiator though but ill order a bottom hose now

I have heard they like to get a bit warm, it does but not overly so.
Top

Its been a fairly busy day today, first of all was a good clear out of the garages, which were getting very full and I couldn't find anything .... I took two C5 loads of rubbish (with folded seats) to the tip. Well I say rubbish but I have been ruthless and trying not to hoard things ... The garage is looking so much better for it, there is space to move around the cars now and a big work bench has seen the light of day again too. In fact im close to finding another space which will fit the C1, just need to find a new home for some doors and it should fit in the garage, or that is the plan, it depends how much wider than a Renault 4 it is

I have found many car bits, mostly Citroen, which I had forgotten about and some I need rid of, mainly a S1 XM front bumper ...

Then it was time to look at the sticking brakes on the XM, after stripping the front O/S we noticed that the rear brakes were stuck on too. Possibly the Doser valve then but it turned out to be the control rod which lives under the scuttle. It was dry and seized, its now well lubricated and working perfectly agian. I have been out for a 30 mile drive this evening and its back to normal, better even as we have bled the brakes and reinstalled the front pads correctly. Ill use it this week for my drive to work and see how it goes. All being well ill drive it down to Shipley at some point in the week to get a outdoor fitted car cover made for it, the company has not done one for an XM estate so needs to make a template.

Some pictures from the CXM last weekend of my Activa and others: 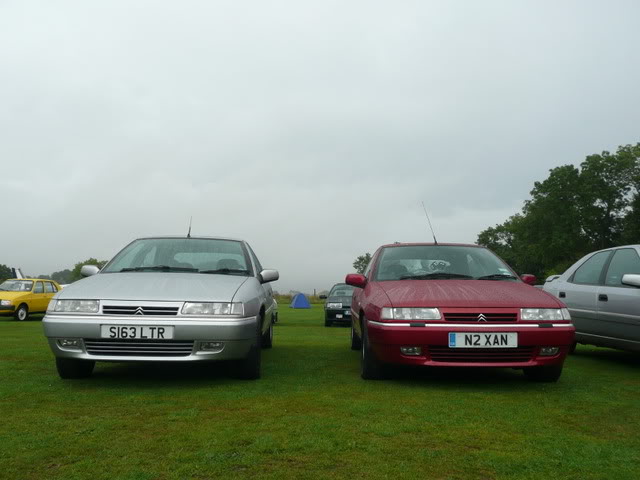 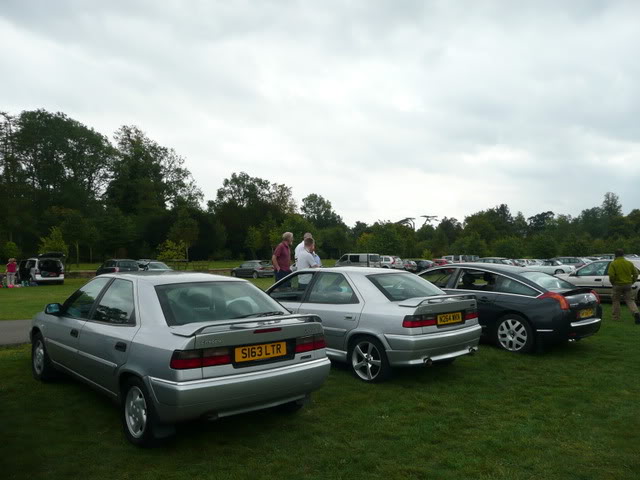 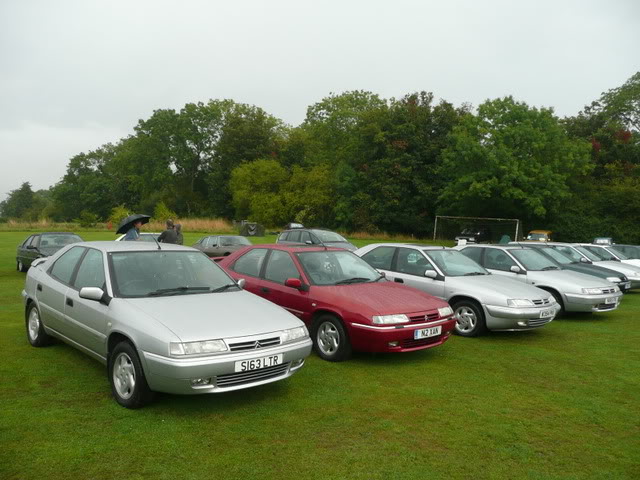 ah its so cute, they are leaning towards each other

Deanxm wrote:ah its so cute, they are leaning towards each other

They know they're both Activas

Chris, The radiator, can be a horrible job

Did you read my tales of replacing an Activa rad both on here and in the Citroenian?

You can salvage the bottom hose and my trick may be a good one to follow but it will ruin the old rad...

I've noted that my Activa runs much cooler with a new rad but a lot of that will be as Richard suggested, getting rid of all the dirt in it, the intercooler and A/C condenser. Mine looked as if it was wrapped in a fur coat...
Top

Must be the ground, as both of them appear to stand straight ... I should hope anyway, it took me half a day and a tanker full of fuel to set mine

I did read your posts about changing the radiator, it almost put me off

I did pull back the radiator yesterday and there was leaves and things behind there but not too many. The radiator looks very crusty and brittle at the bottom so it will need to be changed. I'll have another look thorugh your thread to get some ideas on how to change it

I found something very cute at Stratford this weekend, a brochure entitled 'William and the Citroen GS'. A young child walking around Rennes making silly faces and watching the production line, brilliant