That would be my advice too Franklin...
Top

That would be my advice too Franklin...

But not mine!
Top

Have now seen your Blog...

I've been through similar dilemmas and in fact going through one right now and it's very, very difficult. When you see my blog you'll see why


I know Jim, I knew I couldnt keep them both as running them as my only cars for the annual mileage I do is just not feasible. So one was going to have to go and I really couldnt decide which, the V6 Im enjoying very much and the Activa appeals to me for so many reasons. It was a hard decision but it had to be done.

The trouble is I like all of my current three cars equally but really wanted this HDi and really need to be back to just two cars again (PITA being a student!). The Activa is my biggest worry, If I sell my C5 and regret it I can easily find another. If I wanted another V6 they are easier to come by. However Activas are getting rare and finding a well sorted one even more difficult.

However, if the Activa does not sell (or have serious interest), maybe by the end of the weekend, then I will keep it. I might decide to anyway. It is a pure luxury for me to have it, as when I use it Im either going somewhere with very interesting roads or I'm just out for a general drive about in it. Which does bring out my next thing, that car really provokes the worst in me! But that is what an Activa is about in my opinion.

As for the C5, its possible that I will sell it. I'll see what I feel like when I have the HDi. The HDi I am planning for it to be a very long term keeper, so there is no worries with my authentication for writing the column

They appeal hugely, the economy makes it a very usable car, the space from the estate makes it a very handy car to have around and the spec of the Exclusive is desirable to me. Not to mention the reasons why I like Xantias! There is no doubt that the Xantia HDI could replace my C5 as my daily transport, and it might well do that.

If so, my Activa will be my second car, however if that sells I might well get another XM. Im not sure what model or age, perhaps an early S1 in basic spec, im not sure, but it would have to be a hatchback. Or something else for a change, Ive a real hankering for an Avantime at the moment. We shall see what happens

Im very pleased that Mike is going to take on the V6 Xantia, I will miss it and would have liked more time to enjoy it.
Top

First dibs on the Activa..
Top

Awsome, its good to know you might want it back. However I have decided to keep it, there is no way I can bare to part with it

Awsome, its good to know you might want it back. However I have decided to keep it, there is no way I can bare to part with it

Good, because there is no rational reason for me to have another! If i could get a nice S2 again I'd be happy but they are very thin on the ground..
Top

Come on Chris , I'm looking forward to some nice pics of your exclusive estate

bxzx16v wrote:Come on Chris , I'm looking forward to some nice pics of your exclusive estate

Yesterday was a very good day, the logistics worked out perfectly for Mike getting the V6 and me picking up the HDi from Richard. Mike hitched a lift with Richard in the HDi Exclusive and we all met up at Jims. I drove down to Jims in the V6 and got there just in time to give a bit of a hand putting the front back on Jims XM, that really is coming along now

Many thanks to Richard for a superb car, which was also full of bits and pieces he has gathered over time. Including a full set of Exclusive alloy wheels, full sunroof assembly, headlights, spare parcel tray, cargo net, ECUs, new front and rear brake pads and more ... excellent

I could not be happier with the HDI, I thought I would like it but its far more than I expected

My drive home was about 240 miles (annoyingly the main dual carrigeway up to here was closed, so that added on quite a corner for me),the weather was torrential rain at first, but after 100 miles it was fine. The car turned onto 74,000 miles on my way home

I had my seat heater set to toasty 2, climate set to 24 degrees and the auto wipers on, everything working perfectly. Im really impressed by the refinement, very quiet and once going there is no engine noise. Its such a smooth and refined car.

I know some questioned my mentality for swapping a V6 for a HDi Exclusive, however it was definitely the right choice. I am totally smitten with this Xantia, it is perfect. The condition is just superb, every electrical gadget works - and it has many, its superbly comfortable, spacious and really rides and drives fantastically. The engine is very good, quiet, refined, torquey and stupidly economical. It has increased spec over the V6 and also that large boot area has already proved very handy.

It really doesn't need anything doing apart from a set of tyres quite soon. Im not sure what I'll go for yet, got a bit of research to do. I do plan on machine polishing it and im really looking forward to seeing the results as im sure it will come up fantastically, not that it doesn't look great already. I think the fuel gauge needs a seeing to though ... im used to driving a Xantia and being able to watch the fuel guage drop, this one doesnt move!

I have done another 100 or so miles in it today, it really is any excuse to drive it at the moment

Im impressed with the spec of an S2 Exclusive. I love the heated seats and automatic wipers, I also like having a sunroof. I found the CD changer this morning, so its now loaded up - my first ever working CD changer

Its a bit dissapointing that the S2 did away with the AUX in on the radio unit like the S1 has (forward thinking there Citroen!). Never the less, it has a tape player and I have a decent tape to AUX convertor which will play my Ipod nicely when needed.

Im quite surprised at the interior differences between the S1 and S2. Being used to where things are on S1s it took me a while to find the heated rear window switch and also the fathem the steering wheel controls, kept trying to turn the volume up with the mute button! I htink I have it sussed now though

All in, im very happy with the HDi Exclusive estate, what a car

bxzx16v wrote:Come on Chris , I'm looking forward to some nice pics of your exclusive estate

You might have to wait a little while Mark for some decent ones, this weather is awful

I did get a few when I was out early this morning, but they are phone pictures and so don't do it any justice. 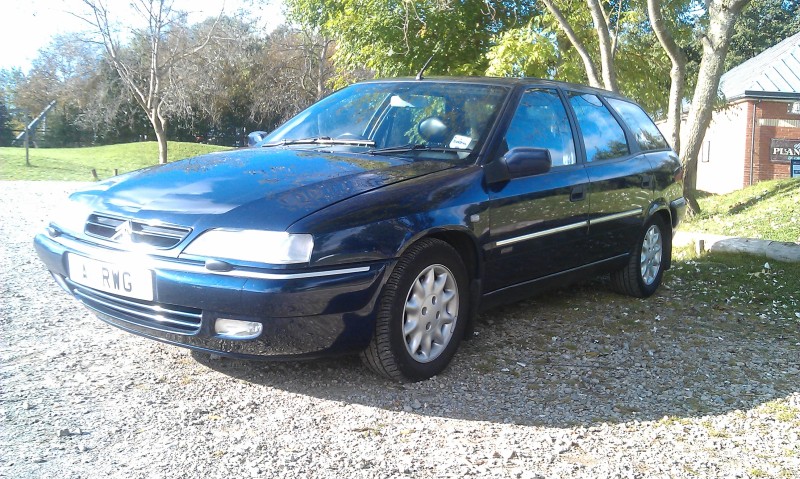 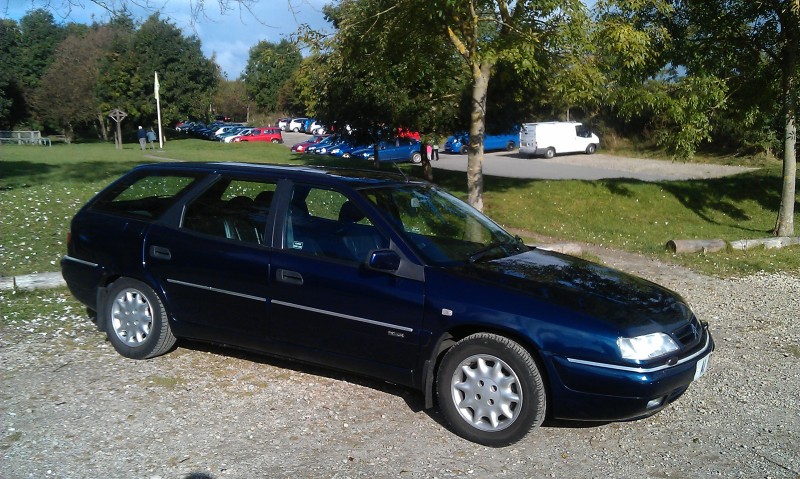 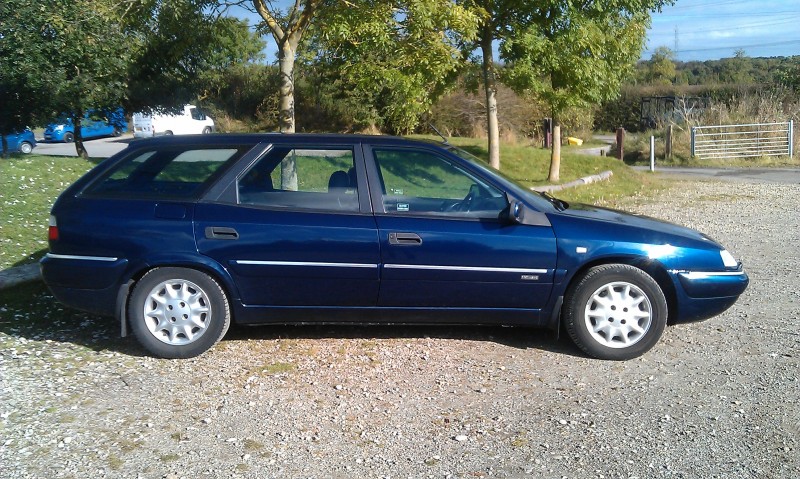 Richards private plate will be off within the next few days or so and it will be back on its original S plate registration. I do like the look of this private plate, makes a car look a bit more cared for somehow. I did used to have a private plate (didnt mean anything to me) but it was a letter, a number and then three letters, just like Richards. I got tied of swapping it between cars and so left it on one car I sold. I might well have a look for one with my initials, shame my initials are also an acronym - CBA!

As you might have seen, I have removed the Activas for sale details as I am no longer planning on selling that car. I know I would regret it hugely as its a very appealing car for me and one which I have wanted for many years. I would put an Activa high on my favourite cars ever list

I plan on having it at some of the CCC events next year, it missed every one this year.

Some better pictures of the Exclusive and its interior to follow

Chris, I'm delighted you are happy with the car

You can't beat an ex-DickieG car; both mine are

Thanks for the help in reassembling the front of the XM yesterday and as always, great to see you...
Top

Great to hear you're pleased with the car Chris, I know it's a good'un that's fully sorted but it's always nice to hear the same from it's new owner, brilliant

Your not wrong there Rob, that is a very good reason why I like this car so much.

CitroJim wrote:Chris, I'm delighted you are happy with the car

You can't beat an ex-DickieG car; both mine are

Thanks for the help in reassembling the front of the XM yesterday and as always, great to see you...

I am totally over the moon with it Jim, thanks to you and Chris for spilling the beans about Richards new car last weekend

Yes, good to see you too Jim, I wonder if I'll see you next Saturday!

DickieG wrote:Great to hear you're pleased with the car Chris, I know it's a good'un that's fully sorted but it's always nice to hear the same from it's new owner, brilliant

It is very nice Richard, I shall enjoy having this car, its in safe hands

Very nice Chris , i look forward to some more pics .