citronut wrote:well if he aint psycho now he could well be after countless mig splatters get him

No, Kev's immune. He's owned an XM for long enough now and if he had any tendency to go psycho it would have shown by now

citronut wrote:ou Kev can you focus on the welding instead of swanning round France

citronut wrote:well if he aint psycho now he could well be after countless mig splatters get him

No, Kev's immune. He's owned an XM for long enough now and if he had any tendency to go psycho it would have shown by now

Impossible, Citroen owners are the most sane people there are!

Citroenmad wrote:Citroen owners are the most sane people there are!

First signs of insanity Chris, I'm not mad everyone else is

citronut wrote:ou Kev can you focus on the welding instead of swanning round France

about time hun now keep your eye on the ball,
i cant talk i was welding a dersh ( 2CV ) all week, when finished it didnt look like a weeks work

Citroenmad wrote:Citroen owners are the most sane people there are!

who'z to say who is round the bend, its just an opinion

First signs of insanity Chris, I'm not mad everyone else is

I was pretty insane BEFORE I bought me first car.

Well, I now have a knock-free V6

I spent a bit of time today having another look at what could be causing the knocking. I tried all sorts of ways to recreate the knock and find any play in the front suspension, but I could not find play. I then set about stripping down the front brakes and copper greasing them, which didn’t make any difference.

Quite puzzled by now I thought I would go around and check that every bolt was tight. Fortunately I found a few which were not, they were nipped but only loosely. After a good tighten and a test drive, all appears well and there are no more knocking noises. Im very pleased, I do like a simple fix!

I took the V6 for a blast around some familiar and half decent twisties today. Wow, it really has impressed! Until now I have just been taking it fairly easy, what with me being unsure of what was causing the knocking noise. After sorting that I went for a bit of spirited driving. It really is a jekyll and hyde car, a really excellent cruiser and a great car to waft about in everyday, but press down both sport mode buttons and get it on some enjoyable roads and it really changes. A growling engine and nimble handling for the type of car, its very enjoyable to throw around. It is a very different drive compared to the Activa but very good nonetheless.

My uni parking permit is due to renew next week (£120 is frankly extortionate for a parking permit) and I have put the reg number of the V6 on it, so I'll be using it occasionally for my 70 mile round trip. My C5 and our eldest C5 are also on it, I like to spread the miles. I had my Activa on it last time and it did a few miles doing that, though its a waste for that car to be pottering up and down the motorways. Ive done 1400 miles in the V6 so far, im not thinking about what that is in fuel money. I think I need a car which does 100mpg as my daily driver to balance things out

We have spent a bit of time doing a few jobs on the 2cv today, I'll be glad to see the back of it! I do still enjoy tanking about town in it but it’s not really my cup of tea.
I also spent a bit of time helping a friend with his C5, the heater controls are non functional and the passenger side has the usual failing of the motor cog being worn resulting in a very hot passenger! It is a bit of a fiddly job to get the motor out on the passenger side but the resistor is easy to get to. Both will need to be replaced.
After that I went to see Rob (ragger) and his new acquisition, it is a very nice XM and an excellent find. It has been a while since I have seen a car with so much paperwork!

I am disappointed with the lack of interest in our XM, its a fantastic car. Im getting more tempted to have it myself and make it my daily driver, which would mean selling my beloved C5!

While I would like to use it daily there are things which put me off. Mainly the fact it would be out in all weathers and we have kept it away from the salty winter roads. It would also be doing about 20K a year. Then there are the luxuries which I take for granted in my C5, cruise and air conditioning. The XM has only been out once since the ICCCR, so I think I'll wake that up and use it for my day out tomorrow, about 200 or so miles, which will give it a nice run.

My Activa has had a month on SORN now, which is not sitting well with me. I am of the opinion that cars, Activas especially, should be used regularly and not laid up. I can see me taxing it next week, further depletion of my bank account

Go on Chris get the activa taxed , as you say they don't like being laid up . I've just taxed the Zx for 6 months so it can have the odd run out on dry days , they really do need using as much as possible . I must take the Zx out soon it's not really been anywhere since getting back from the Cxm . I'll get the bodywork issues finished and take here for a run over to Huddersfield for some cleaning goodies .

I no doubt will do Mark, at the earliest opportunity that I can get to the post office

There is only one way around that ... sell one!

At one time I was paying just £30 a year road tax, I was very happy with that but pretty bored of the car

My Activa will also only come out for the best and salt free days this winter. I had to use it through the salt and grime at the start of this year due to my C5s clutch failing, I'll not punish it with that again!
Im looking forward to the CCC events next year, where my Activa will be attending. It occured to me that I have been to events in the Prestige, XM estate and V6 Xantia this year but not in my Activa! What a waste

If that is where I think it is, Holmfirth way, there is some very entertaining roads over that way.

I decided to leave the XM where it was yesterday instead of taking it out for the day. The weather was awful all day and the V6 was the first car available, so we all had a day out in that. Torrential rain aside, we had a very enjoyable trip over to the Yorkshire Dales for a spot of cheese tasting and food. The V6 went well and the knock on braking/pulling away has definitely gone. About 180 miles all in, I enjoyed every one of them

There are some great roads over there, including one of my all time favourites, the 'Butter tubs' pass, very scenic with sheer drops from the road sides, lots of winding roads and its very twisty, its a fun area!

With the Activa being stood on SORN all last month I thought it time to tax it again. So it is all set for the forseeable, MOT and service last month and now its taxed, ready for some light use. Of course I had to have a trip out in that this evening, I had a grin from ear to ear, as I usually do when driving that car

Can anyone spot the landmark? 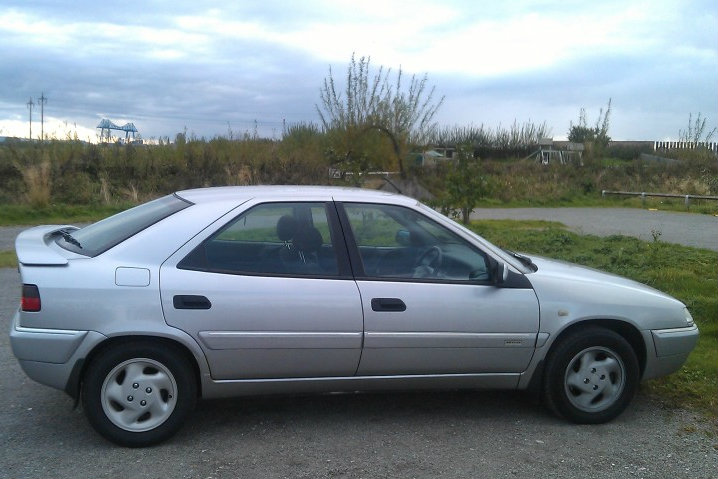 I recognise what I think is one of the very few transporter bridges in the UK Chris...

So that must be Middlesborough...

I am bit of a bridge aficionado and tunnels too. Citroenxm once made my day by taking me across the Menai bridge twice

Goodness knows why but I really love bridges of all sorts...

Nice to see the Activa out and about again

Just brought mine out for a bit of regular use too. The V6 has gone to bed for a little rest after her hard work last week, going to Aberystwyth and back.

Pleased to see the V6 is no longer knocking!!!

Spot on Jim, it is the Middlesbrough Transporter bridge. Nicely put back together after its dismantling for Auf Wiedersehen Pet. Would you believe people actually came to see that it had gone?

I was very impressed with the tunnels in Wales, the ones through the mountains with the road coming the other way going around them, superb!

Yes, I couldn't be without driving the Activa for any longer

Ill be using it daily this week, my C5 is having a rest after its 1600 miles last week

Really its just any excuse to use one of the Xantias

I wish I didn't do so many miles and could just have the pair of Xantias, that would suit me nicely.

Im very pleased the knocking is gone, it was the bolts through the NS 'P' bush which were a bit on the loose side. All sorted now

Citroenmad wrote: I was very impressed with the tunnels in Wales, the ones through the mountains with the road coming the other way going around them, superb!

They're fantastic aren't they. Worth going to North Wales just to see them

I went on the transporter bridge when I was around about ten years old.
Been promising to do it again for the last forty years and haven't managed it yet.
They should dismantle it and move it to Tyneside