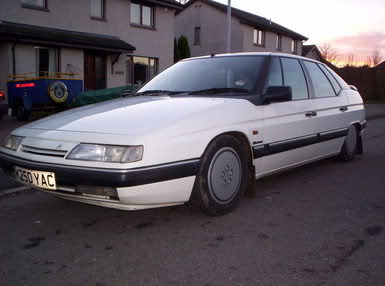 Only thing I could fault it on from the picture is the mud on the front tyre
- it was a nice mint straight looking car. Sister car to one of my current
favourite Xm's too, an identical TurboCT: 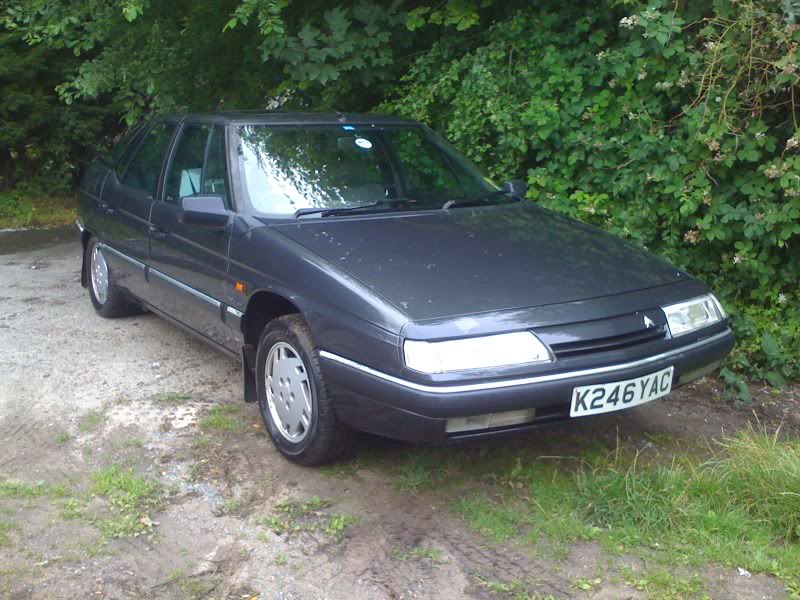 Very handy when you need towing capability and the power: 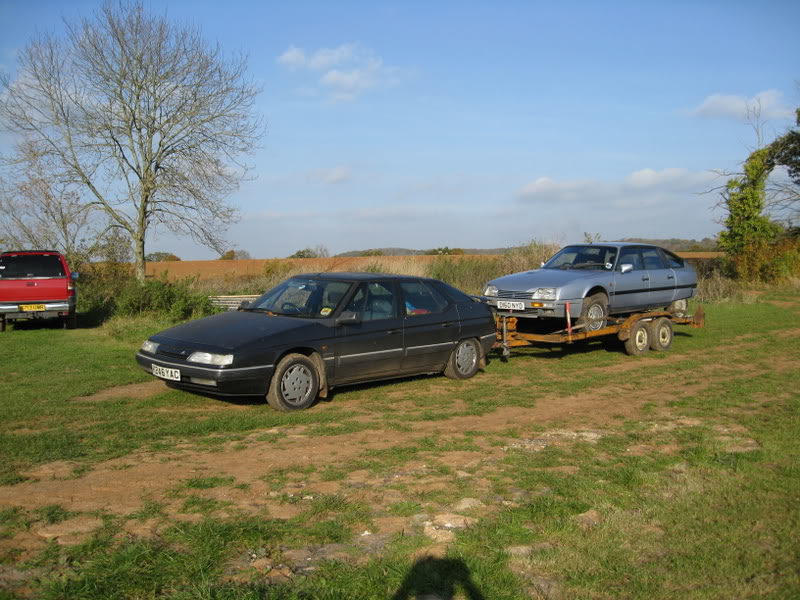 ), at least you've done a proper job and hopefully picked up a wealth of knowledge on the engine and fine tuning it

And like all of us, as the driver, it's your opinion that really only matters.

A guy I know has a body kitted/lowered etc Civic, and the police love him when they do their spot check on the boy racers by the old stadium in MK, simply because he too has done a proper job, has all the paperwork, fully insured with every mod declared, unlike most of the others.

There's a guy nearby who has a blue 106 with spoiler ears and a body kit which is often missing his front bumper. Last year he made a habbit of dropping his girlfriend off across the road, she'd always have an argument and he'd wheel spin away. One night though, after a particularly loud argument between the pair (I really felt sorry for him!) he revved up, went to pull away and stalled! It kind of ruined the moment for him

Xac wrote:It kind of ruined the moment for him

Crikey what a load of "Victor Meldrews" there are on here, whilst Maxxy.P's car may not appeal to many of you I'm sure you will agree that he appears to have taken the time to carry out the mechanical modification correctly.

What I can't understand is why people are so precious about car's such as the XM which are worth less than the change in your back pocket because they are so troublesome. No doubt I upset a few Jaguar enthusiasts when I stripped a Daimler Double Six V12 to build my Dax Cobra.

I say welcome to the forum Maxxy.P, and to others give him a break and open your eyes to diversity.
Top

Wow, just a few mixed replys there. Ill try to answer all of them.

Firstly I know the car wont be to everyone's cup of tea, but its something I do very much so enjoy. Im not one of these people who just drive about the streets all night long causing a lot of noise and trouble and bing just a general Barry Boy. Ive done this car for mainly shows but will be fully road legal when compleated. The reason why ive stuck with the 306 is because I just love the way it handles and the looks.

Citrojim - Theres a couple of reasons why I went for the 2ltr turbo and not the V6 is cause the V6 is a much heavier engine and even harder to get in the engine bay of a 306 plus im just a sucker for turbo engines.

As for tuning, so far all ive got in there is the forge pistions and conrods, future performance part will include 441cc injectors, hybrid turbo, 3bar map sensor, performace cam, fuel pump and of course a better clutch. Been speaking a few companys who do an awful lot on these engines and with all this should be good for 250bhp +

As for the gearbox I am currently using the 306 Dturbo mainly cuz it can handle the torque needed and its a good gear ratio, I didnt use the orignal box becuase it wouldnt fit basicly it was too long.

andmcit - Im not trying to make you a fan if it, just mearly showing many french parts in one french car (and a couple german parts) Ive heard it all before about how much this has cost me and you wont get nearly as much back from it, I know, but I do have something to show for it. I could be worse I could have spent it all down the pub or on drugs but id have nothing to show or havnt picked up any skills either, becuase ive done everything ( appart from the paint job ) myself, bodywork, mechanical and electrical. As mentioned before ive not doing this to sit in a car park every night its not what I do, I just enjoy doing this kinda stuff.

red_dwarfers - Well it was quite bad really. I drove from bournmouth to north scotland and to be honest it was a nice car to drive, but on the drive i did notice that....
The sun roof would only open and not close, the heating didt work, the car wouldnt lock, the computer beeped every time you hit a bump and randomly faulted some system, 3 bald tyres, quite a bad oil leak, stero didt work, rear heater didt work, handbreak was a bit dodgy at times.

Toby_HDi - Again im not tryin to force anyone to like it and not here just to get compliments i know people dont like it and there are that do, it is down to everyones personal taste, and i know what you mean, I used to have 306 Dturbo sedan and that embarrased a few and that not a majorly quick car either. This one does have the power and not just cosmetic.

Xac - I have learnt an awful lot with doing this, I havnt been one to give a garage the car and a wad of money to do all the work and not know anything about it. As said earlier I have done all the work on this myself and do know the engine inside out quite well and I do fell quite proud with what I have managed to do. I have been sorting out the insurance recently with everything declared and its not as bad I expected. Since a lot of time, money and sffort has go into this I would be devistated if the police took it away because something wasnt right.

Cheers guys for the welcome.


I think if many more young people had things to get their teeth into, it would solve a lot of problems... just my opinon

ps. a V6 is only 180 kgs? .. maybe not that much more weight? a bit late now and I can understand the turbo wish

could turbo a v6

Maxxy.P wrote:Toby_HDi - Again im not tryin to force anyone to like it and not here just to get compliments i know people dont like it and there are that do, it is down to everyones personal taste, and i know what you mean, I used to have 306 Dturbo sedan and that embarrased a few and that not a majorly quick car either. This one does have the power and not just cosmetic.

Indeed, you like it which is the main thing. And as you have stated you have taken the time to do it properly and are not a 'Barry Boy' hooning about the streets causing trouble.

Was just giving my opinion but as I say, it's the ones who don't do it properly and do it for 'street kudos' as I believe the term is. I've never seen the point. If you are taking it to shows then perhaps there is a meaning to your work.

I do sometimes wonder though that if you're going for the power, how all these bodykits and wings affect the aerodynamics. I've seen a lot that really are not aerodynamic at all.
Top

I havnt a clue what the term is used either myself to be honest. The kind of speeds that I can do on the roads, or on a track i dont think will be affected too much by the bodykit, the bumpers are lighter than the stock ones but i cant see much difference aerodynamicaly whjat will cause more drag than anything else is the big silly spoilers some people put on...i wont be. There is nothing inside the car but 2 racing seats and 3 point harness and dashboard so a lot of the weight has been removed.
Top

I do like the look of the XM and would prefer it anyday over your Pug but it's your choice. It's just sad the XM couldn't be revitalised as it doesn't sound like it would cost much to put right - I could be wrong of course.

Having said that, I give respect where respect's due and if you did all that work you claim, good on you and I wish you well.
Top

I accept completely that what folk want to do is their business which may not
be exactly to everyone's tastes or ideals. I actually take my hat off to Maxxy.P
for putting the time (not just the money) into the car and developing skills/
expertise from hard graft.

It sounds in his case that the car will be driven round a track or about the
no doubt fabulous roads in Scotland rather than doing donuts around
Sainsbury's car park.

I thought the idea of any discussion on a forum was an opportunity to voice
different opinions/ideas and discuss them in a mature manner and due
respect to Maxxy.P as he has replied succinctly and in depth to convey his
reasons/passion for his car - nothing at all wrong with that; as I say, not
everyone's "thing".

If on the other hand we're all going to agree and be all smaltzy as some
forums I've seen can be where everyone's afraid to voice true thoughts
and feelings about any aspect discussed, this forum would be a poorer
place for it, a total waste of time and be a pile of crap.

Welcome to the forum.

I see in your profile you are in the RAF.

Is this why you wanted to make your car fly?
Top

andmcit wrote:I thought the idea of any discussion on a forum was an opportunity to voice different opinions/ideas and discuss them in a mature manner and due respect to Maxxy.P as he has replied succinctly and in depth to convey his reasons/passion for his car - nothing at all wrong with that; as I say, not everyone's "thing".

If on the other hand we're all going to agree and be all smaltzy as some forums I've seen can be where everyone's afraid to voice true thoughts and feelings about any aspect discussed, this forum would be a poorer place for it, a total waste of time and be a pile of crap.

With regard to my earlier comments, I'm not wishing to get involved in a punchup with anyone but if I had just joined the forum, taken the time and effort to say hello, post photo's and had received the comments Maxxi.P has it would more than likely have been my last post on this forum.

Personally I think that in this instance as Maxxi.P had just joined the forum, once a few members had voiced their dislike for his pride and joy it would have been far more polite for a few others to say nothing, maybe I'm old fashioned.
Top

In my younger days i had all the intentions of,IIRC "Moddin", my F**D Orion 1.6i Ghia into something different than what was about at the time although nowhere near the degree that Maxxi.P has cone to his 306

I wish i was as mechanically minded now as Maxxi.P is as i reckon i could have saved myself a small fortune but yes it looks good and i do like wandering round the car shows etc so maybe its me that has a conflict of interest..........must go see the nurse

And before i forget welcome to the forum Maxxi.P

Im not at all a fan with things like this but respect due when it comes to the mechanical side of things, really wish I could.