The following pictures are from a seized diesel injection pump I've just dismantled. It is of unknown provenence. All I know is it was rescued from a scrap 405 some years ago.

Dismantling it was a nasty job. It was full of something horrible, brown and smelly. The fluid seemed to comprise water, something vaguely oily and a smell something like "gone off" white spirit. I suspect it is either very badly "gone off" diesel or vey rancid WVO.

This first picture is the high pressure pump components. All should be very clean and shiny! 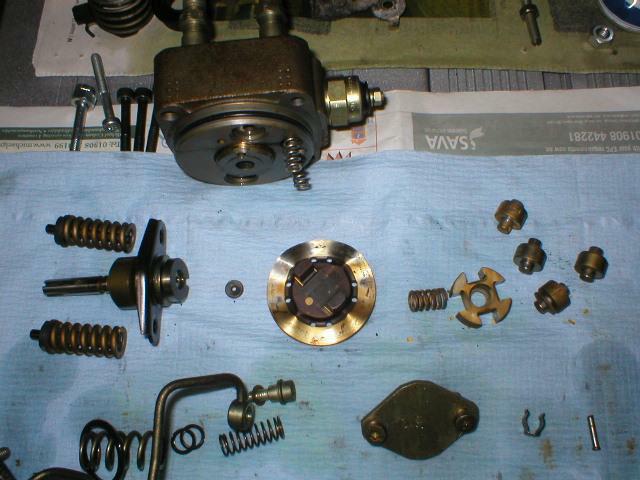 This is the view inside the now stripped pump body 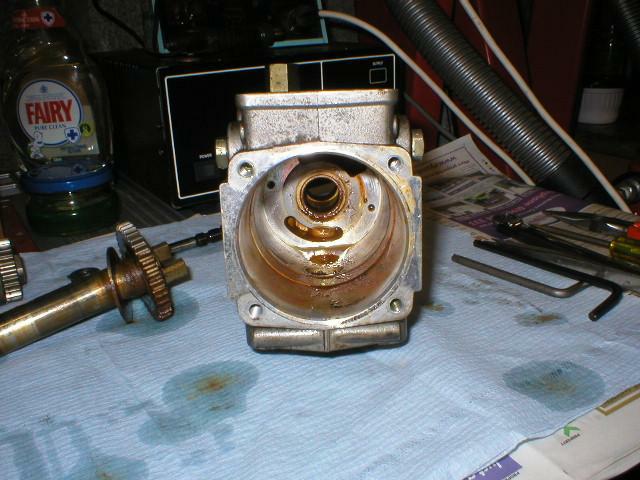 This is the driveshaft and timing device from two angles.. 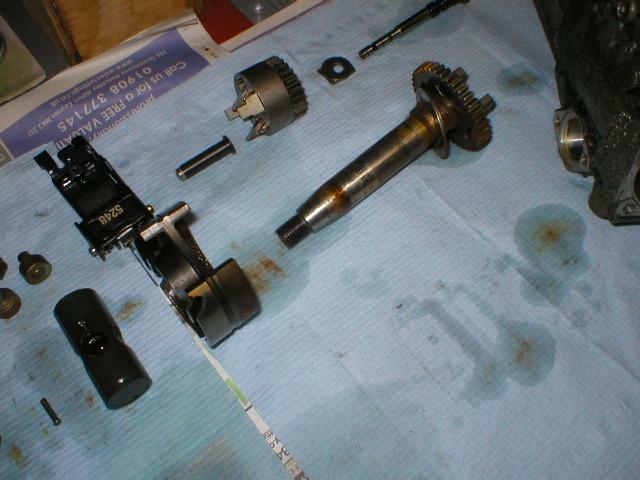 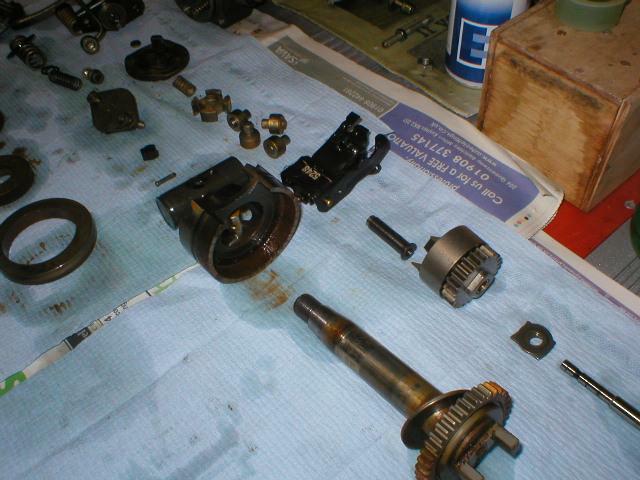 This was where the real problem was. This is the lift pump. It is full of rust and debris... 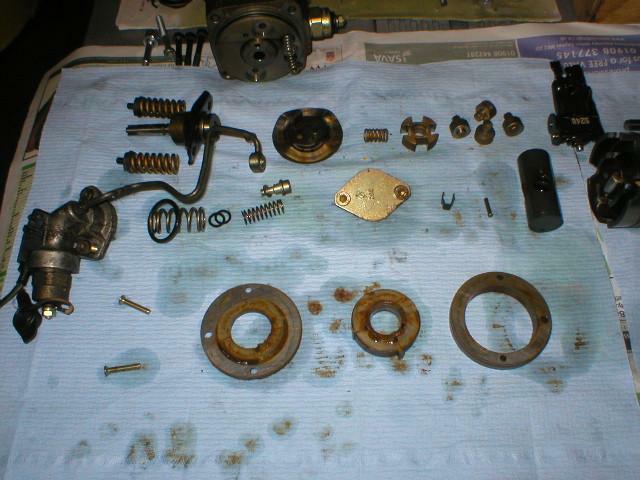 A bit of a closer shot. Here you can see the lift pump vanes. These should be able to fly out under centrifugal force. These are totally seized in the rotor. You can see the rust and debris on the blue paper the pump components are sitting on. 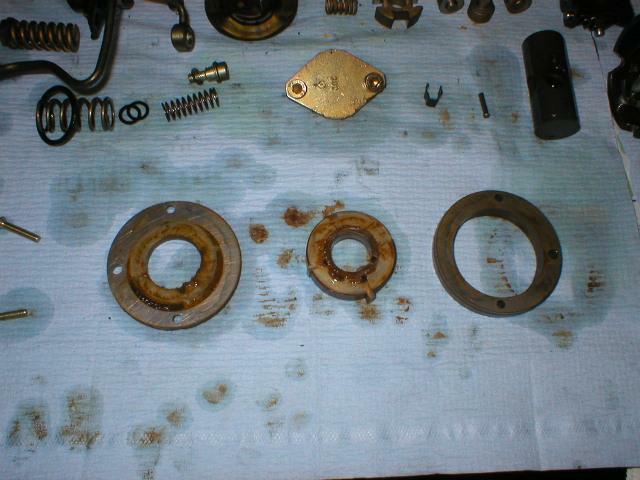 I'm not sure how rescueable this pump is. Some of the corrosion on the lift pump looks terminal.

More to follow. I've not yet dismantled the LDA or the distributor head yet..
Top

Moved as it did not seem to be logical to put it in the Citroen forum after thinking about it...
Top

Is that the pump I gave you Jim? Nasty old mess in there

AFAIK the car was running just prior to being broken.
Top

DickieG wrote:Is that the pump I gave you Jim? Nasty old mess in there

AFAIK the car was running just prior to being broken.

Yes, it is Richard. Now that's interesting that the car was a runner just before the pump came off. How long ago was then?
Top

citrojim wrote:Yes, it is Richard. Now that's interesting that the car was a runner just before the pump came off. How long ago was then?

I reckon it was about five or six years ago.
Top

Here are some more pictures, this time taken with my Canon on macro and again processed using InfanView..

This is a closeup of the inside.. 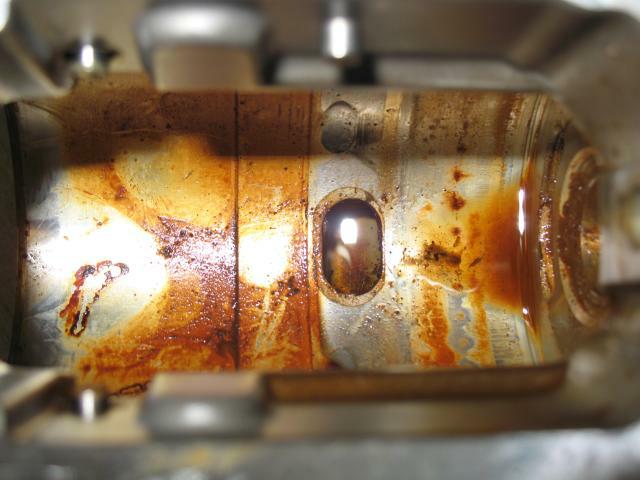 This is the corrosion and brown powder on the lift pump components.. 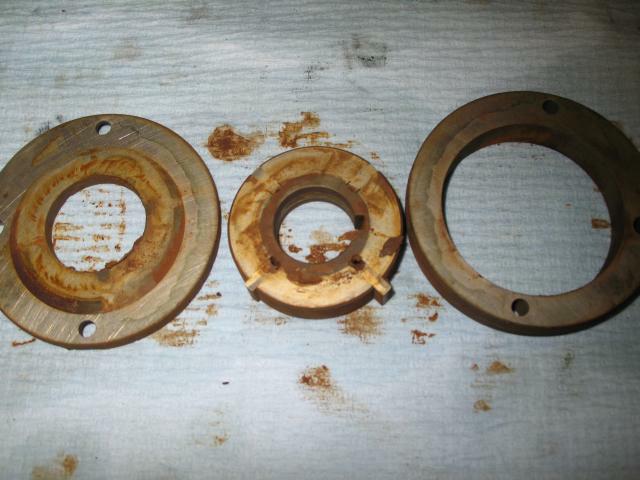 This is the corrosion on the drive shaft 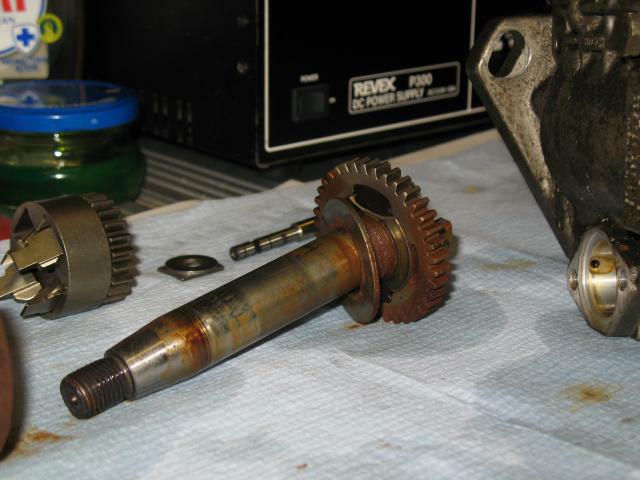 And this is a close-up of the timing rotor 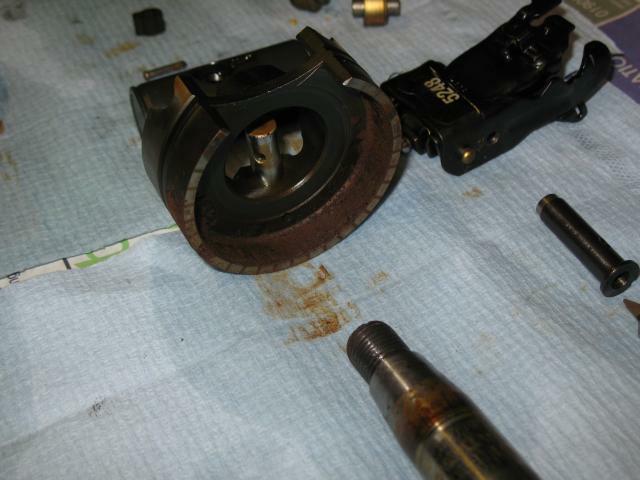 As soon as time permits, I'll start a clean-up and see how it comes up.
Top

To me that looks not as if it were a Veggie or diesel issue ut that water was in there in the first place to cause that kind of rust. Diesel after 6years should be that bad if the pumps inlts and outlets are sealed up well enough.... The ones that come of some citroen shelves i would imagine as being there for a long time but well sealed would look a lot better than that.

The vanes are the biggest cause of of concern there by the looks of it as i think that would cause terminal failure if run long like that as they would all either stick out or stick in, niether of which would be good......

Its nice to see though if i was like that in the first instance whn it was running how hard a beating the Bosch pumps can take.

I'd love to see the insides of one that has actually failed on a car a month or less after it fails...
Keep up the good work there Jim

I take it that you have only got the Fuel Pump (as shown). It would be interesting to know what the inside of the Fuel Tank looked like. I had a problem a few years ago, due to a fungus growing inside my Fuel Tank. Had to clear the lift pump in the tank with Parazone, petrol failed to clear the mess. It had no reprecussions on fuel pump once the tank and pump(within) was cleaned
Top

Despite looking like the pump had been sitting in a barrel of sea-water for several years, it did, with a lot of work, clean up. Some bits needed the attentions of a bit wof well-used Scotchbrite but everything is looking sparkly now. I found that used (and filtered) Hydraflush works well as a final cleaner and an excellent reassembly lubricant as well as a good test-oil to flush and test a newly rebuilt pump.

I soaked the lift pump rotor in Hydraflush to free off the seized vanes. Worked a treat!

During the clean-up I found several areas of concern. A couple of the high-pressure delivery valves were blocked and took a bit of delicate work to free them. More worryingly, the transfer pressure relief valve was seized shut so had this pump been used without checking, the transfer pressure would have built dangerously high until no doubt something "gave". More likey a seal but it may also be a possible cause of engine runaway as being discussed in the Peugeot area of the forum.

The pump took hours and hours to clean up but the result is well worh it.

If anyone is contemplating using a pump that has been standing around a long time, condition unkown, I'd caution very much against it. have it rebuilt first.

Here is a picture of all the bits laid out just before reassembly commenced. Scary or what? 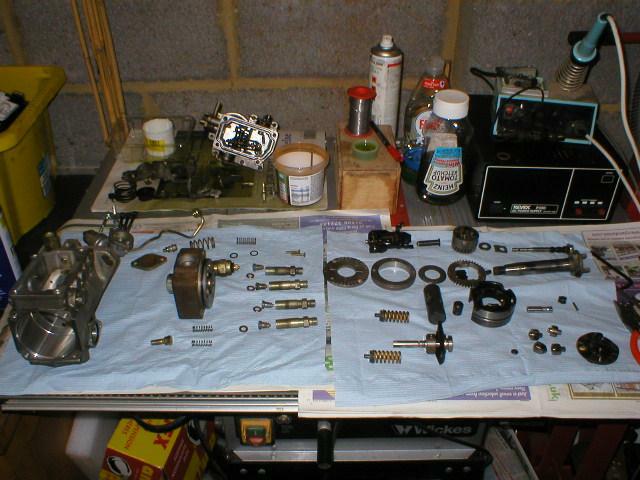 I've made up a build jig for the pump to hold it firmly in the vertical plane whilst reassembly takes place. Basically, the pump is mounted on end and all the bits fed in until it's together. Only when it's nearly all back together is it safe to lay it horizontally again. Otherwise, it all goes horribly wrong!

I got to have a look at the Lucas pump that failed on my nephew's 205 today. Two things were achieved; I determined how to disassemble a Lucas pump and what went wrong in the dead pump.

The pump had allegedly failed whilst running on bio-diesel and had died slowy, finally refusing to rev from idle before dying completely.

Lifting the lid showed contamination very similar to the mucky brown stuff as seen in the Bosch pump above. The interior of the pump also smelt as if the decorators had just been in; it smelt of Dulux

The main problem that stopped the pump was that the fuel metering pin (attached to the end of the governor) had seized in the stop position and took a bit of shifting. Apart from being mucky and having slightly noisy bearings, the rest of the pump is OK and will clean up and live to pump diesel again.

I have reason to believe the car stood about for a long time (around a year) and the muck you see is the result of the diesel decomposing to something horrible during that period. The bio-diesel was a red herring.

As is well known, these pumps die very quickly if run on veg. The reason is the distributor rotor shown in the picture below seizes in its sleeve due to lack of lubrication. The clearances are very close and only thin diesel can get in there to lubricate. Thicker veg just cannot penetrate and as a consequence, the rotor heats and welds to the sleeve. You can, if you look carefully, just make out some scuffing on the rotor and this looks like the start of what happens when lubrication runs short. The small device on the right of the picture is the seized metering pin; the cause of all the problems in this pump. 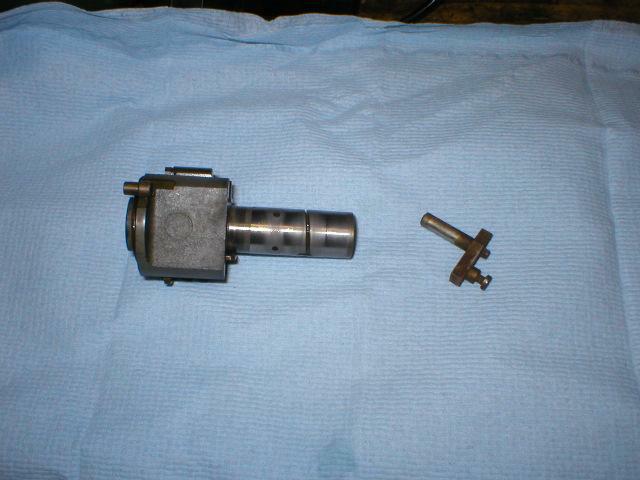 Did you ever find/make a tool to get into that bit you couldn't get into?
Sorry, can't remember what all the names were again!
Top

red_dwarfers wrote:Did you ever find/make a tool to get into that bit you couldn't get into?
Sorry, can't remember what all the names were again!

Ahh, you mean the cam ring peg (as pictured below) Kev. 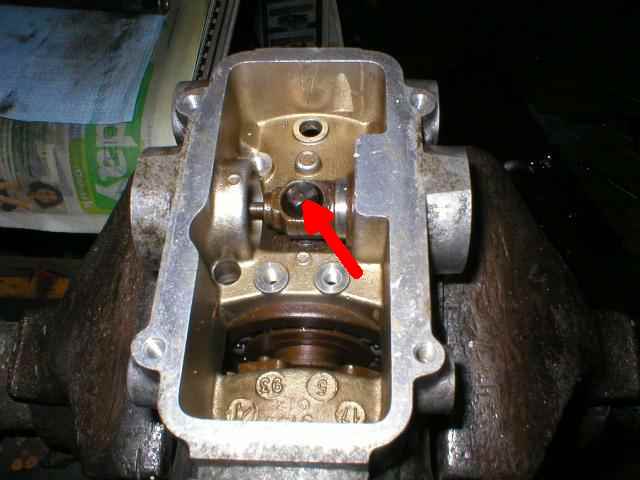 No, and this is still defeating me. It's a circular shape with two flats ground on it and is very tight. You can pull the pump apart without removing the cam ring but you cannot get to the governor or the main bearings..

The picture shows some of the contamination still present in the pump body, especially evident in the region of the governor. It looks like rust but isn't.

I shall keep searching..
Top

Here's a shot of a Lucas pump all in bits except for the governor and cam ring.... 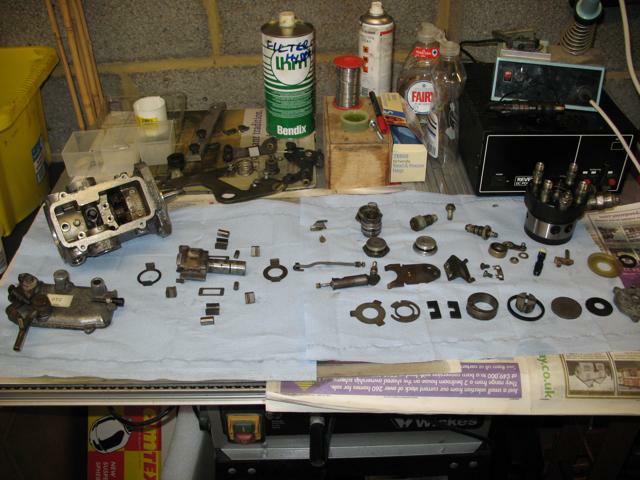 Further investigation into the Lucas pump pictured above shows there is corrosion present, particularly on things that were originally plated steel, like the governor plate. The plating has significantly discoloured and the bearings are quite rusty, as are the unplated steel bits. Therefore, the contamination is of a different nature to that in the Bosch pump I spoke of earlier. In that one, the contamination cleaned off relatively easily to leave shiny metal, even on unplated steel; in the Lucas, there is real rust

Good diesel will never do that as every other pump I've opened that have run on diesel have shone like new inside.

I have to conclude therefore that the bio-diesel was not such a red herring after all. It might have contained sufficient moisture to leave a considerable amount in the pump or perhaps it was not fully reacted and both meth and caustic soda got in and did the damage.

Makes one think twice about the wisdom of running on anything but diesel.

SVO is OK though. but only in a Bosch. It contains no moisture to speak of and no nasty chemicals. All that happens to SVO that stands a long time in a pump is it goes a bit sticky and gooey.
Top

After a good clean and rebuild, the Lucas pump featured above now works

They are a right old devil to bleed and get working when they are first run from completely dry.

It has been rebuilt due to the replacement pump on my nephew's 205 also apparantly failing in the same way as that one did. I'm off down to see him and swap pumps next Saturday.

I'll be keen to pull his replacement pump apart and see what happened to that one.
Top
Messages: 20