Ahh well, it could have been a lot worse John...

Have fun with that balljoint

The car will live again, as I predicted

KP wrote:Most likely Jim. I mean how many people just go for a drive these days??

I do, but then I no longer drink or smoke. I love driving, and I'm damned if I'm giving that up. I don't mind spending £20-25 worth of fuel on a Sunday afternoon and having a blast through the countryside..
Top

well she is around for a while longer

was an easy lower bj change on saturday, the rain held off.. i swapped the 4 wheels around, and did the front OS pads, cant believe how much they had gone compared to NS and also since I last looked at them a few weeks ago.. the HB cable looks rough, and suspect binding..
anyway, i put £10 in the tank earlier, drove as uneconomically as I could and got another £4 in.. but she was a little smokey as i arrived at mot.. chap was nice, and gave me the cert..
the p bush on the NS arm seems like it's worn.. no visible cracks in the rubber, but with the hub disconnected, I felt there was too much play really..

edit.. scary - but the area outside my garage is on a slope..parking across it, I can use one axle stand under the sill, and, on low, both wheels on that side lift clear with no jacking

so long story short.. Saturday I drove with friend to a back street dealer in High Wycombe.,. there was the C5 I had been looking at.. first impressions were mixed.. from the outside it looked fine, mauritious blue.. but the inside was a grimy hell.. I wouldnt care if it was my grime, but it was someone else's.. even buttons on the radio stalk seemed hard to press due to ingress I imagined..
anyway, drove it, wow so quiet, clutch and gearbox so light compared to my xant..
I had to make a decision, to brought it and taxed it and set off on a journey to Newcastle! leaving the xant parked near heathrow..
the drive was only marred by the fan giving up almost straight away.. it meant that most of the journey had to be done with back windows open

otherwise, she was fine.. seemed to get 50mpg all the way up approx..
when at dads, i picked up the other thing that was part of the trip.. a replacement old speedboat

(I have one but have failed miserably to get it restored, and just wanted one that is mostly together and working)
home trip, was fine.. you could notice the boat and I had to use 4th sometimes.. economy dropped to 40 I would say...

Whilst speakng to a breaker for the fan module, he told me he had a leather interior as well, I think in the right colour.. so I may go back up to Derby for that, the fan control, and whatever I need for Cruise control..

one thing, some C5's appear to have a boot lowering facility built in to the back luggage area.. is this something I could retro fit? as it would be very useful.. I am guessing exclusive estates only?

car was quiet, nice to drive, comfortable and an upgrade in most respects to the xantia.. however, day to day use on the roads I drive, the xant would be more fun, and I would be less concerned about hedges and so on.. if and when she goes i will be sad.. a lot of effort has gone into keeping her running for the 4 years..

Steve sorry we couldnt hook up.. I didnt really want to leave the boat anywhere, and was pushed for time in the end..
John

ps. car seems to have had a service every 10K and a cam belt during the last one..
pps it has a non standard alarm,and neither of the two keys have buttons for CL, although one does have a battery in?) - the other is a normal service key..
Top

No problem John.
This is a largely crime-free area but you never can be certain.
Someone slashed the sidewall of Annika's new C3 on Friday night.
We then discovered that over a hundred tyres in the area had been slashed the same night.

The ability to change the rear height for loading is restricted to estate models.
It was something I liked about mine, not because I really used it but just because it was there.
There is a rocker switch on the offside juts inside the opening, about ten inches from the floor level.
Top

I agree that they do bring advantages over the Xantia but the Xantia is a better car in some areas too. No doubt you find your Xantia a bit more nible on the smaller roads, something which I have to say improved with C5s as they got more recent.

For cruise control you need the cruise control stalk, this just slides into the comms2000 unit and is wireless. Easy to remove and fit. On some C5s, depending on model year, you will need the second brake switch. This goes under the carpet towards the front of the passenger front footwell. You will also need to enable it in two options using a Lexia.

As Steve says, all C5 estates are fitted with the adjustable rear suspension from a boot mounted button. No hatchbacks had it, though its probably not impossible to fit, im not sure where you would start, what with it being all multiplexed.

All C5s came with remote central locking, you should have a fairly large flip key with three buttons, one for unlock, one for lock and one to open/close the windows. It should be easy enough to get a key, cut a blade and code the key.

I think most C5s have the plugs ready to take the electric leather seats, some are mot electric or heated, so it depends what you find.

Looking forward to the pictures

This is the cruise stalk you should need. Take no notice of what it says, it wont be suitable for a C4 (steering wheel mounted anyway), C6, 407 etc. Which is what you need to watch for, as C5IIs have a different stalk to the earlier C5Is. You need on with and on or off switch, ones with cruise or limiter written on are wrong for your car.
Top 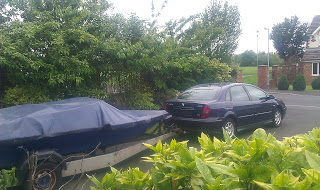 Citroenmad wrote:You need on with and on or off switch, ones with cruise or limiter written on are wrong for your car.

They will still operate the cruise, although the speed limiter won't work.
Top

will know more about the new seats soon.. they are in a 68,000 petrol car... but leather and heated and electric.. will post pics of them when I get them..
the boot switch would be handy as the boat is in the way of the jockey wheel! not a big deal, but I cant wind it up or down.. right now I can lower the jockey to the ground, tighten it, and while holding the towbar clamp, the car will lower-off with suspension in down position.. but I need someone pressing buttons in the car at same time

it's no huge deal though.. the nose weight is about 65kgs... can lift it off manaually..
Top

Citroenmad wrote:You need on with and on or off switch, ones with cruise or limiter written on are wrong for your car.

They will still operate the cruise, although the speed limiter won't work.

Interesting, I didn't think it would work as cars with it have a slightly different method of operating the cruise. However its best to have the correct one and not one with a function which can not be used

quick one from me..
after a cheap nice 2 weeks in Spain, I am basically back at work until Christmas now, save a couple of long weekends..
have not touched the C5 since i brought it back.. but will use it on Friday eve onwards.. going to Derby on Saturday to collect the leather interior.. is there a chance the front seats will bolt straight in and connect up without issues? or may I not have the wiring plugs?
I can try changing the fan control module, guessing I wont upset the car by doing this..

will leave cruise until a lexia can be found.. there are a couple on the way South

I may try to get headlining.. but not easy to bring that back home really.. an in situ change i am guessing wont be easy..

jgra1 wrote: will leave cruise until a lexia can be found.. there are a couple on the way South

John, feel free to call in on the way to Derby if you want to use a Lexia... It'll be good to see you!
Top

may be on way back !