will just unbolt it Dean, no spark plugs to get wet lol


hmm good thinking about handbrake cables.. the creaking happens when driving straight over any bumps. turning steering when stationary etc.. i.e. all the time..
Top

the XM did it untill i got some new cables, nice and cheap too which made a change, the Activa creaks if you try and push it back and forth with the handbrake on, the wheels rock back and forth in the arches a bit, i have replaced the wishbone bushes and strut tops though

The one thing that is quite noticeable, the noise is a lot worse when the car is warm..
I tried applying handbrake gently when it was noising, but no change..
what part of the suspension and steering is very sensitive to either bumps or steering - to make the noise.. most parts I can think of are one or the other? I only have to slightly tug the wheel or go over the slightest of bumps, either way it creaks...
I will find the cause

The other thing is the struts themselves they move an awefull lot but try greasing the guides where the cables pass through especialy the ones in the engine bay, this will stop the noise for a while if it is the cables.

thanks D.. will see how she goes to Sidmouth tomorrow

I have a feeling Peter N is very close by, if I am stuck

well,, the xant is behaving ok..

recently have done Devon, Newcastle, Jim's, The Lakes, Suffolk ! all very pleasent journeys in the car (have done similar on the bike as well!) it has been a stupendous 2 months for weekend mileage!!

thanks to Jim, an inner track rod was liberated from his stock, literally from under his nose

and now i have had the tracking done again, the car almost feels like it should! it's a lot easier to drive, still wanders a little but not nearly as bad as it was..

I noticed at least one damaged inner rim, hopefully a forum member has a spare, and that should smooth the car out..

the fuel filter is lasting, after the 4 filters-in 4 weeks of June.. must have been a bad batch of WVO..

Just started geting a sticking starter again.. not the battery, most likely another duff chassis earth lead.. could be the SM going...

I may finally have found the cause of the loud creaking.. was really bad this weekend.. what are the chances of the strut top / rubber mouting area being dry or something?
It was creaking loudly inside the car from lock to lock at standstill this weekend.. as it was over small bumps etc..

otherwise.. looks like i may move again.. not being able to work on car, keep bike safe, and living with far too many housemates is taking it's toll... looking at a couple of places this week.

On the creaking front, could it be dry front struts?
Top

maybe Kev... but it's completely quiet when raising or lowering the car?
Top

How are the anti-roll bar bushes? They were a definite creak in the 405, as were split but not visibly flogged apart P-bushes.
Top

checked all those Adam, all fine..

I will sort it.. but now I am more positive its coming from the tops of the strut/s somewhere..

I am guessing there are bearings in the strut tops? its been a long time since I had one in my hands..
Top

I'm just going off the theory that when you have a slightly squeaky door and you open it quickly it doesn't squeak but when you close it very slowly it doesn't. I'm assuming that there is slight movement in the rams when steering, maybe it exerts a slightly different pressure on it than just the suspension going up and down hence no creaking then?

goodness, it's been a while

The xant carries on.. Although it is showing signs of needing some maintenance now.. and the MOT is coming up..

The creaking sort of abated end of last year, is back now.. nothing too much for me to worry about but I will get the front end apart soon..
I now think the rear spheres are on their way.. Might get all spheres off the car and find a kindly FCF member with a sphere tester

Would like to get 2 used keys reprogrammed, so I can have a spare key and central locking.. the spare set I have comes with the igntion lock.. this will mean changing ignition lock and then a lex session etc (or something along those lines).. Dickie G has offered his services for this, which is kind of him.
The back NS brake is scraping terribly, in the last few days.. I have never touched the brakes on this car (and have done 60K) , so I am fine to let it carry on until I can get discs and pads and spend some time back there.. possibly this weekend..
The slip ring has just destroyed itself, as have a few other peoples it seems.. used one coming from an fcf member.
The car has a WVO fuel heater now, operated by a dash switch for the moment.. will add a buzzer to this circuit.. Was struggling with some schoolboy electrics yesterday, trying to wire two relays in parallel, then series.. couldn't get it to work and wasn't sure why.. Have ended up with 1 40A relay instead.. will come back to this..

recent fuel figures... as always, the car runs out earlier than it should, and when the gauge reads about a 1/4.. Apart from a bent / stuck float i can't really work out what is causing this..

When you pop over for a Lexia session would you like me to get my sphere pressure tester out?

.. The nearside had been badly scraping for a few weeks.. I brought the pads and discs back then, but things conspired to keep me away from the car until lunchtime today.. strangely, the scrapeing stopped a few days ago.. as we all know, cars don't fix themselves! I think it is quite obvious from the first pic, why the disc had given up warning me of the demise back there..

it's scary and thankfully I can grin now.. but.. I dont need to be told that letting my brakes get into this state is not ideal

oddly the OS was still quite within service..

was a very easy job to do though

.. bleeding involved the most messing around really.. 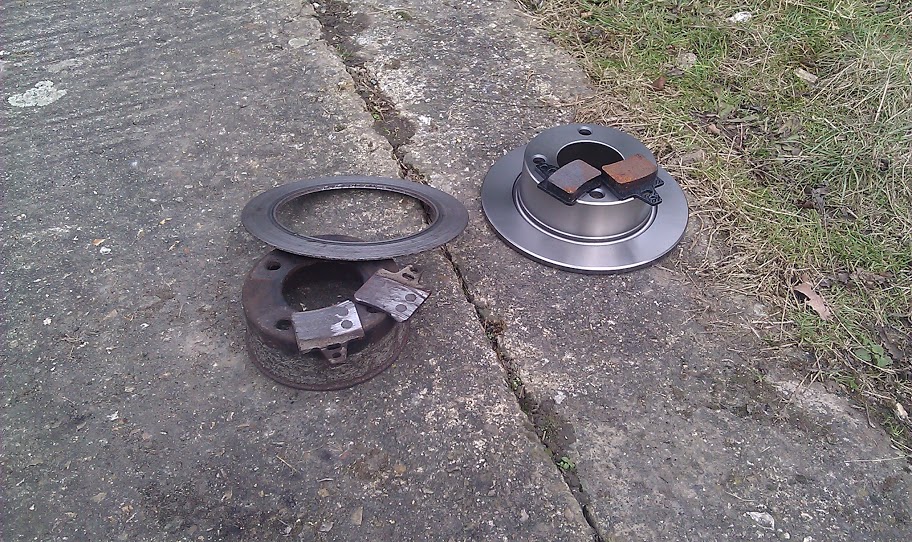 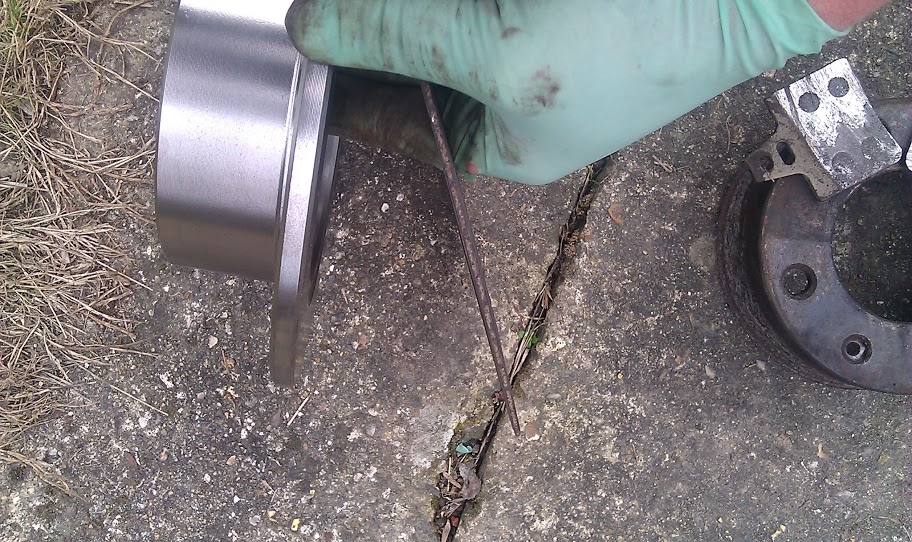