Yes Dean the Cobra was loads of fun, so much so I regularly wonder about building another, before buying I researched all of the available kits at length both at the manufacturers premises and at loads of Cobra Club meetings, in the end I could identify the manufacturer of a Cobra replica from yards away! Having done the homework I went for a Dax as they were far better built than other manufacturers offerings plus they were far more professional and akin to ordering a car from a main dealer.

Cobra performance was interesting according to what engine was fitted, a Rover V8 gave what I'd say was akin to a Golf GTi of the time, Yank V8's sound lovely (far nicer than a Rover V8 due to a different firing order) but are a minefield to find out what exactly you have as the same small or large block could have come from say a Corvette or a camper van with totally different power output/characteristics and as the shape of them varies wildly to get an exhaust to fit you really need to take the car to have a bespoke exhaust made at quite large expense. It was for these reasons that I took the V12 route, power in abundance pulling away in top gear effortlessly and with the side pipes it sounded like a Spitfire of the Supermarine variety

Side pipes are all but essential with a Cobra as the floor is flat so exhaust pipes have to sit below the floor resulting in having to wind up the suspension for ground clearance whilst still running the risk of grounding, at night a quick blip of the throttle and flames could be seen emitting form each side pipe, childish but fun

Glad your on the mend pal

It was a 20 year old stalled project when he bought it, and after we spent all day getting the Ford V6 running again he decided to rip it out and shoe horn a BMW 5.0 V8 and 6sp manual box in it

Build progress is slow to say the least as everything is having to be made bespoke. My mates driving skill (or rather lack of it!), plus 300BHP rear wheel drive with slightly 'unconventional' handling, is, I suspect, going to end up in meeting a hedge backwards pretty quickly....
Top

DickieG wrote: at night a quick blip of the throttle and flames could be seen emitting form each side pipe, childish but fun

Not childish. Cool. It's not quite as impressive, but when Ben and I fired up the GSA motor in the sidewinder after 4 years of it being sat there doing nothing, we did it without any manifolds fitted at all, and sat there watching it spit flame out the exhaust ports..
Top

As the C3 had a scuff on the N/S/R bumper, this afternoon I took it to meet up with Gareth (Xantiaman) as he has his own business doing Smart repairs Kidmans and from personal experience I know he does an excellent job as three or fours years ago he painted a couple of area's on Dawn's BMW which are still not visible as well as the bumpers on my old HDi estate. The C3 scuff is in the following photo, another excellent job done, thank you Gareth 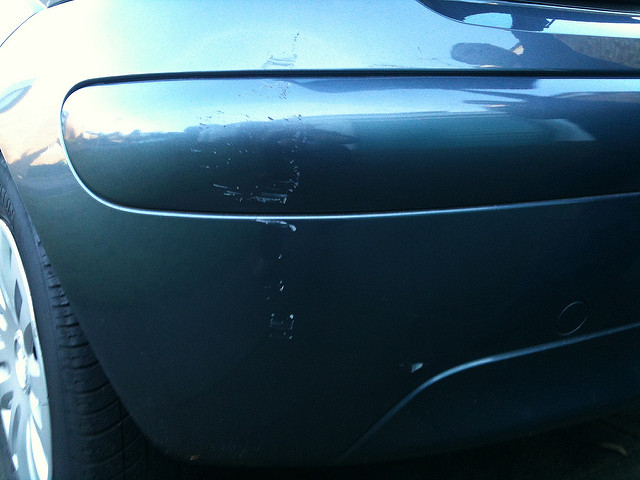 Whilst I was there a friend of Gareth's arrived who specialises in removing dents, the C3 had a small dent on the O/S/R wheel arch where a car door had been opened against it and another one just above the drivers door where something had been dropped on the car, from my point of view the nature of the dents suggested that the only way to repair them would be to sand them down, fill/spray etc so I was prepared to live with them. However about half an hour later both or them had disappeared, I'm still amazed that they were removed without using traditional methods even though I watched it being done, a very interesting afternoon watching skilled workmen ply their trade, well done chaps

Bung a copy of your post in the "Recommended Garages & Services" forum please Richard.
May benefit both Gareth and other forum members.
Top

Thanks for the complement Lexi, I've needed to have surgery quite a few times in my lifetime for one reason or another, I know I wouldn't be around now if it wasn't for Surgeon's and Nurse's skills after I suffered 47% burns when go-karting.

It must be a huge buzz to have the skills of a Surgeon and know that you have changed peoples lives for the better, on my last consultation I went out of my way to express my gratitude to my Surgeon for an excellent job well done.

I've often thought about how fortunate I've been to have someone able to repair my body when parts of it have been injured/broken, so yes in answer to your question, Surgeons (and others in the nursing profession) really are wonderful people and I hold them in the highest esteem

Not a lot to report here since my last post other than the euphoria on my back was rather short lived, in fact just three days in total, talk about tempting fate

On the 28th December Jim and I spent a very long day working out why Tim Leech's Xantia was failing emission tests followed by me spending the best part of another full day on the car the following day, the result = one car with an MOT pass and me with a buggered up back as from those days forward the sciatic pains down my left returned together with lower back pain due to doing too much too early. After suffering for several weeks without improvement I booked another appointment with my Surgeon for yesterday, he thinks I've strained the scar tissue so another 6-8 weeks of intense physio then if no improvement is made I'll need to start again with another MRi scan. I feel like a right plonker and rather frustrated at making such a schoolboy error, what a dope!

Car wise not much at all has happened due to the above other than light tinkering but later today I'll be taking a look at that non running C6, if it requires an engine change I think I'll leave that one for someone else

Thats a bit of a shame about your back Richard, hopefully not as bad as it was before?, i wish you a speedy recovery. To be honest it sounds like a massive lie to get out of camping at this years rally's but i will give youu the benifit of the doubt i suppose:lol:

So the crunch is, that the V6 Petrol is the best C6 to have as its has the "old school" technology?

I hope you have a speedy recovery Richard.
Top

Chris570 wrote:i think if you did that a representative of Citroën UK would come round and torch it

So it'd not be all bad then