Richard.....not sure how i missed tbis but just realised your getting married soon.....Congratulations,

On the 7th isnt it? 2 days before my birthday

Is the DS going to be the wedding car?

As people in Liverpool would say "Im made up for you "

Not long to go now!


vince wrote:Richard.....not sure how i missed tbis but just realised your getting married soon.....Congratulations,

On the 7th isnt it? 2 days before my birthday

Is the DS going to be the wedding car?

As people in Liverpool would say "Im made up for you "

Hmm, my Birthday is the 9th of May too!

Thanks guys, just a couple of weeks left as a batchelor

this evening I'm out on my stag with mates from work so I may well be suffering in the morning, the way my back is at the moment I may need to be wheeled around in a bath chair before we even start!

I've been pretty much out of action car wise due my back, according to the Dr and Osteopath they think I have a prolapsed disc, hopefully the MRI scan next week will reveal all as to what the source of the problem is and then an appropriate course of treatment. At the moment I'm not suffering so much from lower back pain but shooting Sciatic pains down my left leg which vary randomly throughout each day, one minute I'll feel relatively fine the next I'll be in agony despite not having done anything. Last week I was simply sitting down talking to Dawn when I felt as if I'd been electrocuted down my left leg causing me to shout out and twitch like Jack Douglas from the "Carry On" films

Obviously its fingers crossed that I'll be OK on the 7th May even if it means fully dosing up on painkillers, I'm quite looking forward to it as we've planned something slightly different from the norm. My DS will be there on the day provided I can get in it to get it out of the garage (due to my back) but not as the main wedding car,,,,,,,,,,,
Top

Not a lot to report car wise other than my VSX had been suffering from wheel wobble due to unbalanced wheels, I don't know what it is about the tyre dealers around my way but they are unable to correctly balance wheels so rather than waste time and money with them I took it to my local Citroen dealer at Chalfont as they do a good job and are not cowboys.

I'd only just sat down after booking in the car when the service manager came over to speak to me telling me how nice the car was and that one of his mechanics has spent months looking for a decent Xantia without success. After the job was done and I went to leave I was thanked for bringing in such a nice car to them, hmmm, not every day you get comments like that

Well just one day to go before I get married, other than the fine weather we've been having for so long changing to rain tomorrow night

the planning appears to have gone well, I'm now starting to feel a little nervous but I'm still looking forward to it.

Dawns wedding ring was finally ready today, after ordering it from a jeweller in Hatton Gardens several weeks ago I've spent the last week chasing it up as I had visions of having to use a polished plumbing compression joint olive as a substitute

As my fingers are so large/fat (bigger than size 'Z') I'll be making do with an onion ring as a wedding ring.

I was given the result of my MRI scan yesterday and was told I'm suffering from a slipped disc which may require surgery, bum

as a result I'm unable to fly at the moment so an exotic honeymoon location is out of the question, I've booked us a few days at a hotel in Torquay and will be using my VSX for the trip as Dawn quite likes that car due to some of the memories it holds of places we went to when I first bought it.
Top

DickieG wrote: I was given the result of my MRI scan yesterday and was told I'm suffering from a slipped disc which may require surgery, bum

as a result I'm unable to fly at the moment so an exotic honeymoon location is out of the question, I've booked us a few days at a hotel in Torquay and will be using my VSX for the trip as Dawn quite likes that car due to some of the memories it holds of places we went to when I first bought it.

Ouch Richard... How uncomfortable.. Poor you..

As for Honeymoon, Ive been looking at Devon and Cornwall too!! Would you be willing to tell me more info on the Hotel you have booked?? PM if you wish..

So its the big day tomorrow then

Good choice of holiday destination the south west. Just be careful on which hotel you pick in Torquay:

Lovely place the English Riviera, went down that way with a few mates the other day to play tennis on the beach.
Do spend a day over on the moorland in one of the more rural bits though and take in some of the fresh air, Torquay is all well and good but it does get a bit busy.
Top

I am delighted to report that Richard and Dawn are now married, only 14 years after Richard first proposed to Dawn under the Eiffel Tower.

The day was excellent and was rather special. None were told of the arrangements, except that we were to all meet up at a large hotel at a given time. getting there on time was a bit tricky due to a very slow M25...

Get there we did, just in time. Not long after, this appeared in the car park: 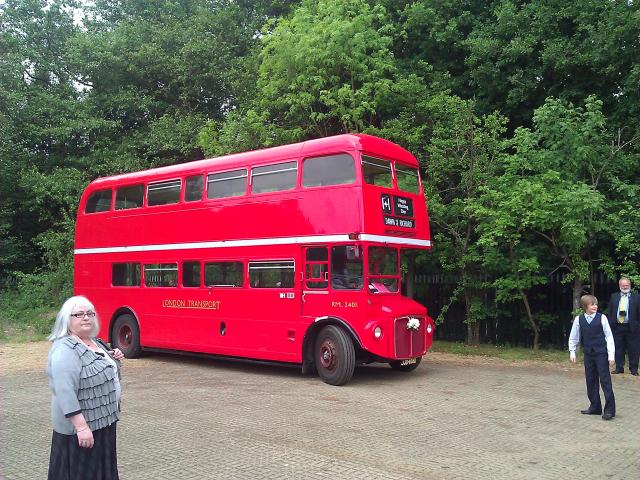 We were told to board it and the bus set off. In due course, the bus was hailed at a bus stop by the bride and her bridesmaid. They got on and the bus took us to a most stunning wedding venue - the Guildhall in Royal Windsor.

After the ceremony it was back to the hotel for the evening festivities and celebrations. An excellent three-course meal was followed by the speeches in which Citroens got two mentions...

An exceedingly good time was had by all and at the appointed time Richard and new bride set off for their honeymoon in Goldie - Richard's VSX Xantia...

The toilets at the hotel were something else... I wish I could have got a photo but that would have not really been right so instead you'll have to imagine a loo with urinals that light up in multiple and ever-changing colours, sinks with a snakeskin finish and automatic taps and a hand drier lit up blue with a moisture sensor so you know when your hands are dry...

All in all, one of the best weddings I've ever attended

It was a truly magical day spent with wonderful people having a good laugh, as Jim states all of the guests and myself were on the bus which was then hailed by Dawn which went down very well with everyone. Even the Registrar joined in the fun whilst keeping an excellent balance of a wedding being a formal occasion. I wonder whether my wedding reception was the first where a Xantia workshop manual was used!! 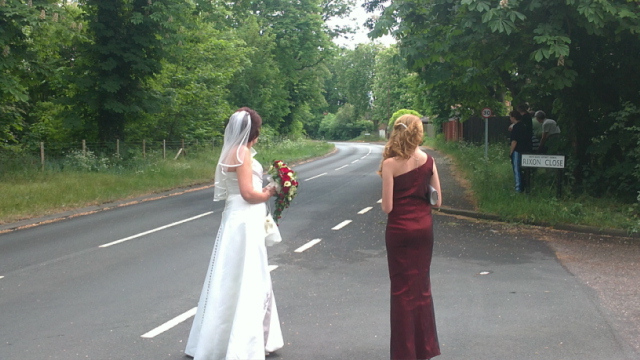 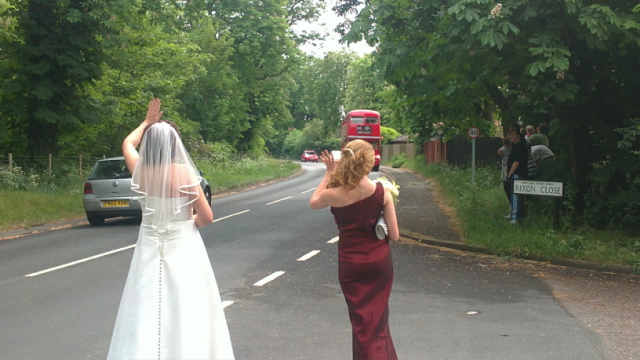 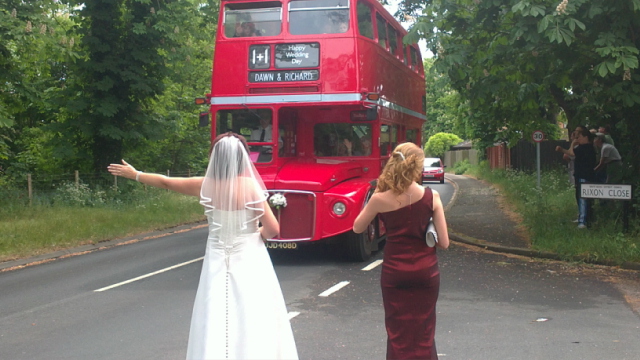 May you soon hear the rattle of little Citroens

Bus was a great idea

It looks as though you had a very good and different day, I do like the bus idea.

Great idea on the bus....like the destination

Fantastic Richard!
All the best to you and your better half

Excellent stuff and ATB for the future.

Thank for the messages of goodwill guys, we've just returned from a lovely few days down in Torquay and touring around the local area, I've never seen so many Gatso cameras and speed traps set by the local Plod, it was like driving through bomb alley!!

We've spent the past week trying to come to terms with how well the day went and take it all in. Just before we left to go away I took a brief look through some of the photo's our photographer took with my new camera and expensive lenses I loaned to her and was horrified to find loads of them to be fuzzy and out of focus, being somewhat puzzled as to how this could have happened with this fantastic equipment (Canon 'L' series IS lenses) she managed to outwit me by turning the lenses to manual focus then failing to focus, hmm, not irritating at all

Yesterday we drove onto Dartmoor where I took this photo 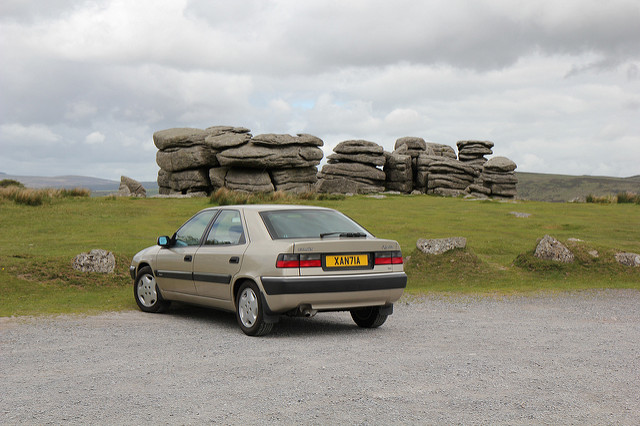 I am delighted to report that Richard and Dawn are now married, only 14 years after Richard first proposed to Dawn under the Eiffel Tower.

Blimey, i thought i was slack with a 9 year wait

Congratulations to the both of you, looked like a great day and i hope you both have a long and happy future together.

Bit of a pita about the photo's mind, our wedding day seemed to go by in a flash, looking back at the pictures i cant remember being in half the places or with half the people i was snapped with and its only been 3 months