Looks like your only option is to paint thw whole quarter i'm afraid...

As usual during the week there is very little time, i've managed to get the NSF bumper corner repaired and painted this evening which leaves just the lower centre sectin to repair as its been scraped bad at some point and needs a lick of filler.

I've been doing a little digging on turbocharger specs and found out the Activa really does have a tiny turbo!

The compressor wheel trim comes up as small than my original Maestro Turbo one, which was also very small! Its not that much bigger than the 1.9TD item which says it all...Gonna do some more research to see if there is a turbo off the shelf thats a better upgrade.

Not driven the old girl since its 948 mile weekender the week before last, it has however had all its dents (ok 95%) removed from its panelwork.

My good friend, Dave 'Dent' Thomas got to work removing all the dings and dents it had aquired over the years, even getting out a really awkward one on the OSR wheelarch edge, a very skilled chap! There was a few he could not remove due to lack of access but overall the car looks so much better.

Still to do is paint the back bumper and NS wing mirror, and possibly get the front end resprayed because of all the stone chips. I may live with it...
Top

Took the Activa for its dreaded MOT this afternoon and pleased to say it passed with no advisory.

No luck in getting the tyres fitted though, due to the hub centres being fixed i cant get them balanced... so that will have to wait till tomorrow.
Top

So pleased I'm not eatuing my headgear this evening

Yours is even cleaner than mine. What petrol were you using at the time?
Top

Hi Jim, it was on shell v-power I think. At least we know why they idle so lumpy, its because they are lean running and low compression. One car down, now for the TD which I'm sitting in right now, fantastic driving it again!
Top

New tyres fitted but what a hassle!
I wanted a good performing tyre but without huge expense, I chose falken tyres, only 40 quid each from camskill. However, next day delivery turned out to be nearly 2 weeks. The first pair went missing, and the next pair were also delayed.

I wanted to get them before the mot because I wasn't too sure they would pass as they were, the nokians on the front were feathered on the edges.

There were actually still legal but I wasted a lot of time, with the mot expired on the 1st of the month it was only yesterday it all got sorted.

I also had a rear tyre replaced due to a nail, a shame as the goodyear nct5 eco was only half worn, but I got the non-eco version off ebay a couple of months back for 15 quid.

Another problem I had was balancing, due to the fixed hub centres very few places do them, I found a place but I was charged for the privilidge, 40 quid to fit and balance 3 tyres!

Still, its done and quite a difference to drive. The falkens are aysemmetric (sod spelling on my phone!), it feels nice and sharp, and also quieter, so that's one less thing to worry about.

As I have my TD on the road and back with me, I thought I would swop rear lights. The TD has the earlier smoked lights which I thought would look much better on the dark grey, and the clear lights from the activa would contast well with the dante red, I'll have to do a picture but it does work well.

Activa got treated to a wash and oil change, and just needs the odd blast. I am considering going to a track day at snetterton in december, subject to finances as it will be an early christmas present from the missus, but she will also be a passenger.... Looking forward to it!
Top

These are the tyres fitted to the front - 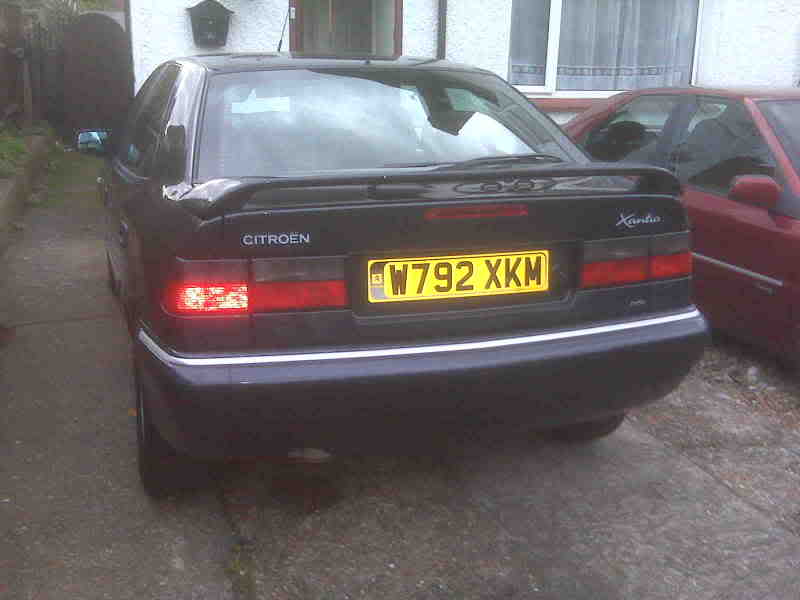 Next on the list will be a stainless back box which i picked up today for £20 quid, a bargain as its brand new. I've just got to get it fitted. Its an oval 4x3 inch tailpipe very similar to the one on my Maestro, its fairly subtle and with give a much better look to the rear, hopefully a more sporty noise but without being boomy, as the centre section and cat will be retained for now.

The O.E box comes out at an angle and then the pipe used to point towards the ground, almost as an apology for being there!

With the new back box, the box itself was significantly smaller, but due to a lack of time and lack of pipe, it was decided to keep the exit angle as per original, this meant the bumper was uncut.

Interestingly there is a flash line in the moulding next to the cut-out, assuming its for a V6 with twin pipes?

Anyway, the O.E box came off with no troubles, huge bloody thing! It became apparant that the design is a baffled type and very effective at reducing noise and making the car sound characterless. Fine if you like that sort of thing, but i like my cars to sound turbocharged if they are so equipped. One bog downside is this also knocks the power by creating a fair amount of backpressure.

A section of pipe was cut to make up the difference in length between the two boxes. This pipe was measured at 2.25 inches, it didnt fully push into the centre section of the exhaust but was close, so for the time being i wont touch the rest of the system just to change the bore size as its good enough for 250bhp.

The back box was lined up to my satisfaction and welded into place, a couple of hangers also fitted on the O.E positions.

I am very pleased with the result and for the money. I dont really have any spare so its all done to a budget, had i some extra laying around and a section of pipe with a subtle blend, the exit angle could be straight, but i like it as its different.

I'm sure most will be interested to know the benefits besides the visual effect and i'm pleased to say that yes, the engine does appear to breathe more freely, the O.E box was definatly a restriction to power and once the cat is replaced, should not need any other exhaust mods till a bigger turbo is fitted.

Secondly, the noise factor. At idle its barely louder but does have a nicer note, a bit more of a burble. There is a bit of boom at cruising speeds but, not excessive as you can still chat to the missus if you have to without raising your voice!

Its a straight through design so in theory i have removed quite a large restriction from the original set up, very happy indeed!

I did wonder out loud to the girlfriend as to whether a Volcane style back box would fit. Needless to say, she has never noticed the exhaust on the Volcane or the Activa!

I know what you mean about the originally fitted exhaust. It looks like an incorrect one has been fitted as a replacement, but in fact that's how it's meant to be. And the back silencer must be the biggest I've ever seen, except on an artic!

Mine is pretty slow at the moment, would be nice to compare.

I have also noticed a huge turbo lag when cold (the turbo pressure is fine) so I am guessing the diaphragm has got oiled up, and once warm, moves freely...
John
Top

jgra1 wrote:Would like a go in your Xant Gareth

Mine is pretty slow at the moment, would be nice to compare.

I have also noticed a huge turbo lag when cold (the turbo pressure is fine) so I am guessing the diaphragm has got oiled up, and once warm, moves freely...
John

now you mention it Gareth, both

Your more than welcome to take a trip up here, not far away.
Top
Messages: 572