Painting will be a learning curve for me Vince.. I've not done it since I used to run rusty stuff from BMC.. I'm sure I'll be rubbish at it but I must try...

The wheels are the main problem. Structurally they're perfect but cosmetically they really do look like they've spent several years at sea...

The spanners have been out in force today and first up was getting my V6 ready for MOT later this week. I replaced the drop links as the rubber boots were non-existent and that was after a year

Sadly, I found one fault which hopefully won't affect the MOT and it's a strange one. The offside inboard CV joint boot must have a pinhole in it and I inly noticed it as there is a neat line of grease on the rear of the engine and up over the timing covers in a direct line with the boot. There is not a spot of grease evident on the boot itself so the MOT man will not see it unless he is remarkably eagle-eyed. Time for a new bot kit and I guess this is Stealer only... To not do it risks premature wear on the CV joint and the cost of automatic driveshafts are eye-watering...

Apart from that, all is tickitty-boo...

Toby visited today with his 406 Coupe to fix the MOT fail points on the front suspension. I shall say no more here except to say it was a battle. Toby will no doubt relate the story in his blog...

I met the new owners today of the house opposite. They saw bonnets up, saw the inside of my garage, saw two Xantais and one Peugeot being worked on and asked if I was a mechanic and worked from home. I think they were somewhat relieved when I explained it was just a hobby and that Toby was a friend suffering MOT failure.

I replaced the pump O ring on the Silver Activa so touch-wood, that is that car now fully sorted. Thanks for the O ring Xac

I have one of those cones that allow you to slide a CV/driveshaft boot over the joint without dismantling, let me know if you wish to borrow it Jim as I might be able to drop it off to you one day next week.
Top

DickieG wrote:I have one of those cones that allow you to slide a CV/driveshaft boot over the joint without dismantling, let me know if you wish to borrow it Jim as I might be able to drop it off to you one day next week.

I've got one of those, had it since my 205 days as that was the only way to do those boots as the joints would not separate. I reckon the cone is the best way as one false move with a tripod joint and all the needle rollers could cause a whole world of pain!

Just one thing to remember with a cone.. Turn the new boot inside out first. I didn't the first time I ever tried using it and that was a world of pain too

By paint Jim i meant dabbing on with a touch up brush not spraying......build the layer up slightly proud of the chip so that sanding will bring it back down flush.

Also unless your wheels have chunks out of them i could always do a quick style refurb on them and sand and paint them....they wont be factory shiny but they should turn out kind of like how mine look. They were home refurbed by the guy i bought them off and havent been laquered which is the hard stuff to spray right especially with a rattle can

I was right, it would not be long before more trouble

She goes a treat, drives like an Activa should and all, in all she's a good 'un...

Noticed a small pubble of LHM under her this evening, in the vicinity of the front ram

The source of the leak was somewhat higher up. It looked for all the world like the anti-sink valve had gone

But no, nothing so easy as that. I had the LHM reservoir off to have a look as I could not see from under and found a split leakage return pipe. A split on one of the moulded rubber pipes that take leakage from the front struts up to the reservoir.

It's going to be a fun job fixing that as access is not terribly good. The rubber, as usual, had split where it joins the metal pipe.

Here's where it is, by the green arrow. Other LHM in the picture is from where I removed the reservoir. 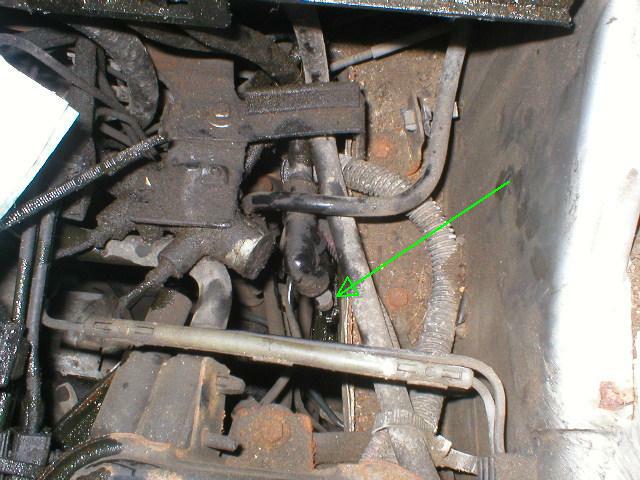 And here was I desperately trying to have a rest and a break from incessant spannering and Xantias.. Grrrr

As I say though, apart from that, she's going well...
Top

I know how you feel, but if we wanted an easy life we wouldnt have bought a citroen...
Dave
Top

I see what you mean about access....Looks like a treble jointed hand job

You will nail it though

Do you know anyone that does paint??
Top

I do Gareth but the truth is, the car is not honestly worth the cost of having a pro like yourself do what's needed. The cost would both outweigh its worth, what it cost me and what it owes me. I know the going rate for what needs doing as follows:

Wheel repaint (no damage but corrosion)

Fixed the LHM leak from the strut return pipes. Luckily there was enough spare to enable the pipes to be trimmed back and reterminated. Heck of a fiddly job though.. I cleaned the LHM filters whilst I had the reservoir off, not that they were dirty though.

Took the V6 for her MOT today. She failed

Luckily (or lucky based on my recent luck) it was the offside gaiter and the MOT man suggested the gaiter had simply popped off the rack. "A five minute job.." he said. Funny bloody ha ha. My luck says it won't be and it isn't. The gaiter is rotten. Mind you, easy to miss when doing a pre-MOT check. That part of the rack is not very visible. Yet ANOTHER bloody fiddly job to do. I'm presently hating cars and Xantias in particular. I have a can of petrol and matches... It's tempting.

It's also tempting to flog the lot and go and buy a Kia Picanto or something. No MOT worries for three years and 10p annual road tax. The the way my nerves jangle at MOT time that has to be an advantage.

Speaking of flogging cars, my Project Activa will be on offer in the next couple of months or so. Anyone interested in acquiring a scruffy Activa that drives like a dream get in touch with a view to opening negotiations. You know its history!
Top

Shame about the MOT Jim, but please dont give it all in. Half a second in any Kia will have you reaching for the matches again ... never mind a Picanto!

MOTs are always a little bit of a worrying time. I change my MOT station depending on how sure i am the car will pass

Im sure you can have your V6 back to normal and MOT'd in no time. Just think what driving that Kia with the food blender motor would be like, that should spur you on!

We all know Citroens require constant work and tinkering, i cant remember a weekend without doing something to one of them, but they are more than worth it.

Your Project Activa is sure to be a very good car for someone, especially after all of your work. I dont think anyone knows an Activa like you do. I wouldnt mind it myself.

Jim, I've got most of next week off including this coming bank holiday weekend if you want a hand?
I'm in the mood for a last minute road trip

Down in Somerset on Sunday and planning a visit to the BoL Museum in Sparkford... So if you fancy a trip up there, let me know. Robyn will be with me and another forum member may well be there too if it all plans out

There is NO chance of me ever abandoning the Double Chevron and LHM!

I actively worry what I'll do when it will just not be possible to run Xantias as daily drivers; hopefully it's a long way off.

The thought of a Kia Picanto is horrible. I regularly drive Dad's Nissan Pixo and that is a dreadful experience. I'd rather walk...

I already have a gaiter kit and the V6 is already up on stands with wheel off ready for work to commence at first light tomorrow morning..

I'm hoping to get the green sheet tomorrow afternoon.
Top

Would you mind at all if I joined you Sunday? Maybe a little mini meet? I've not been to the Haynes Museum and keep meaning to go. Not sure if you plan on going in the museum or not. I promise I'll hide the Coupe so you don't feel the urge to get the matches out after the weekend!

Glad to here that Jim

Im sure Xantias have many more years of faithful daily driving in them yet.

A trip to the Haynes Museum, sounds like a lovely idea. Id really like to go back there sometime, its a very good museum.

Good luck with the next MOT

Right on!
When and where will we be meeting on Sunday?
It will be great to finally meet you Toby!
Top
Messages: 7774