Its always a bit nerve racking when the MOT is due, especially if its not a car you know or has had faults.

I had a panic yesterday when looking through my C5s service book, i found its MOT, which ended last month! I couldn't remember seeing that certificate before and had it in my head that i got a full years MOT when i got the car in december. It took me ages and ages of searching around the house but i did eventually find the current certificate. Certainly got me worried!

It is a shame we wont see you this weekend Jim, will know doubt catch up with you later in the year at the National or something.

Hope you have a peaceful weekend

Yet another Activa lives to fight another day.

admiral51 wrote: Hope the recuperation and recharging of batteries is going according to plan

Indeed it is Colin

I undertook some deep relaxation and battery charging today; I replaced the cambelt and waterpump on project Activa... A good dose of spannering always does the trick.

Good job I did too... The waterpump had been seeping at some time... 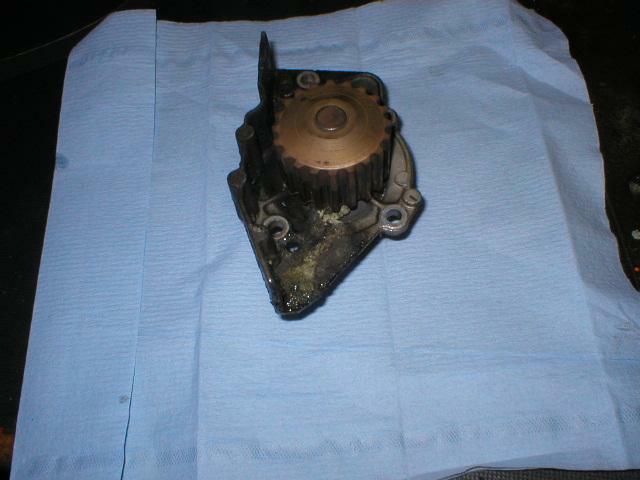 The crank pulley centre bolt was stupidly tight and I had to use the old XUD starter motor trick to loosen it. That's a first on a petrol XU. The bolt should only be done up to 80 ft lbs.

Another first was to find the crank pulley timing hole was exactly where it shoud be. So often they're a mile out.

But worse still, the cambelt was so loose it was almost ready to fall off. It was tensioned to 5 SEEM units instead of the more correct 45

The reason was due to a well worn tensioner which oddly was running silently but it sure had plenty of play. Luckily, I had a serviceable one that came from Robyn's 206; they're the same remarkably!

The car is now taxed and insured. It cost me just £68 to add it to my Admiral multicar policy

Not at all bad.

I taxed it on-line so have no tax disc yet. I did take it for a spin today and took the email confirmation from DVLA just in case. Is is actually OK to use a car whilst waiting for a disc to arrive by post?

Anyway, it's a bit academic as I have a weep in the Power Steering supply flexi pipe. I reckon it was my own fault it's weeping. Ages ago I was under the car in failing light doing the roll corrector I think and the phone rang. In the poor light and scrabbling to get out from under I grabbed said pipe

Looks like a trip to Pirtek will be needed very soon...

Apart from that, all is very good indeed

Here's a quick shot of her looking better than she has in a long while. I gave her a good clean yesterday, just before the MOT.

Photos lie though. She a good "20 pacer"; any closer and the scruffiness is apparent. That's never bothered me overly though..
Top

I'm sure I read somewhere, probably on my reminder, that you could use the car for up to five days from the previous tax expiry date if you had applied online for a new disc.
Top

You are right Steve.You have by law, 5 days grace to use a vehicle on a public highway whilst not displaying a valid excise disc providing the disc was paid for online(not posting a cheque) prior to the previous excise licence expiring.Well thats what PC Plod aka VOSA said when he pulled me over on tuesday 4th not having a valid tax disc in my lorry but having a copy of the online transaction dated 31/04 showing it had been paid.Not sure if they add extra days for bank holidays but fair play to the Post Office,i had my tax disc when i got back to the yard on that tuesday

I put my caravan on ebay at midday not had a moments peace since,maybe i should have asked a higher price

Nice one,tis a good feeling indeed for just a piece of paper!


CitroJim wrote: Gosh, I've been a bag of nerves for two days, unable to do anything of value...
I's terrible at MOT time. Stress comes back with vengeance and I almost fall to pieces.
:

I'm exactly the same..sometimes i'd compare it to pacing around the maternity ward!,been there four times,enough for me!

Jim,sorry if this is a daft/already covered question,i am still quite noobish

- is that a private plate,car looks smart,and the plate just finishes it off nicely

Pleased I'm not the only one who paces up and down like an expectant dad at MOT time. That's a great analogy

Yes, it's a private plate. Came with the car and soon to move to my red Activa.

Don't be fooled by the looks Dave. Mechanically it's good but it now needs some TLC in the cosmetic department

Oh dear Lord, what a battle. My Project Activa has fought me until the very last

I reported earlier that the flexi part of the power steering supply pipe was weeping a bit. Well, on Monday it decided to cry big green tears rather than just weep and it was leaking too badly to use the car.

I bit the bullet and bought a new pipe complete from our local stealer and it arrived on Wednesday. I spent Wednesday evening until late and all of this evening fitting the damm thing. What an incredibly rotten job

Access to the pinion valve is rubbish and strictly, the NS drive shaft needs to come out to get the pipe out from where it snakes along the chassis rail by the gearbox and down the rear of the subframe.

Typically, the new pipe was the wrong one

It had a "normal" flare on the pinion vale end rather than a Citroen flare and rubber seal. It could have been a showstopper but luckily the boss into which the pipe fits on the pinion valve can be removed and replaced with a later type. Luckily I had one on a spare rack. Only problem was access and the strange hex of the boss. It was half way between 19 and 20mm

I found a 20mm hex socket on the end of a universal joint would just do the job.

I found the pipe could just be got out and in without removing the driveshaft but it's a real puzzle and both the inboard CV joint and the activa ram piping gets in the way. Somehow I managed it.

So, that's the end now. I have driven the car and no leaks. I can now use the car and no doubt, knowing what a battle that car has been, it'll soon give more issues

Funnily, despite all, I still enjoy it although it is soon time to take a rest from cars for a bit as I am getting just a bit jaded now.

Tomorrow I will be getting my V6 ready for the MOT. I have new drop links to fit as the rubbers on them have completely gone despite them being new last MOT..

I don't think there are any other problems on it. We'll see tomorrow...
Top

Been out for a long spin in Project Activa this evening

That car was a long, hard slog and had nearly everything wrong. But..

By golly it was worth it. She drive a real treat

Honestly she drives beautifully, nimble, perky, handles like a dream and not a rattle anywhere. The engine and gearbox is as sweet as a nut and despite having a 1.9TD back box on the exhaust system she goes like a good 'un...

She's 99.9% LHM continent with just a tiny weep now from the pump O ring. Xac popped round to see me this afternoon and gave me a couple of O rings and was all for doing the job there and them but today was a rest-day from spanners...

Ian (Tehagent) also called in with his new maroon J reg ZX. It is as described, immaculate

It's almost a time-warp car...

It has one of those quaint choke controls on it and even quainter, a carburettor!!! Long time since I saw one of those...

None the worse for it though...
Top

What's a carburettor? One of those things invented by Archimedes

If your interested i could come down soon and spend a day on the project Activa and mint the body back up for you?....i like cosmetics

In return you could do me a practical demonstration on how to change rear spheres on mine.....

Quick Jim accept before someone else does!

davetherave wrote:Quick Jim accept before someone else does!

Trouble is, some painting is required on stonechips and some cosmetic rust in the rear door-shuts. The wheels need painting too...

Having said that, a bit of your treatment would make a massive difference Vince!!!
Top

Well the offer is there Jim

If you build up the paint in the stone chips then ive got the stuff to wet sand it back and then polish out the sanding marks leaving it 99% better than it will be at the moment.

I recently did a silver mondeo estate for a friend who was selling it. The car looked clean and shiny already but it literally changed colour from a greyish silver back to the original Titanium silver to both our amazement...he said he never remembered the car being that silver and shiny as the years had taken their toll.
Top
Messages: 7774