CitroJim wrote: That made me giggle Steve. Wonder where such a big spanner is used on a DS

CitroJim wrote:It emerges that virtually all the spheres on this car were either flat or ruptured. It has a full dealer service history right until now. Read into that what you will...

A quick glance at the service book doesn't reveal any schedule for checking or changing spheres! Incredible... I suppose it is isn't on the list, they won't do it.

Mike, my risk of a coronary if I kept previous levels of cholesterol and smoking was high!

What even with regular Hydraflushes?

Great news on the smoking Jim....keep it going!
Top

Great news on the health front.

never really liked the death sticks as me and my brother call them and you will feel yourself improve great;y as time away from them increases

The best method i have found for stubborn spheres is a quick tap or two with the cold chisel and then use the locking nut from my sphere removal tool on that chiselled edge to dig into the sphere more and the hit the sphere tool in the right direction. spins off easily.

KP wrote: never really liked the death sticks as me and my brother call them and you will feel yourself improve great;y as time away from them increases

It's already happening Will

Got a lot more energy for one thing

I was a prat on the Sphere chiselling front. I was a twit to keep on chiselling away when I really should have gone for a punch as soon as the ridge was raised.

Did you get any air out of the Activa Sphere block? All I know is that with good spheres, a LOT of pressure and LHM is behind that bleed nipple

A great day yesterday. the girls and I took a trip to Somerset to see the folks. We took Robyn's 206 so that she could have some long driving practice.

Did she ever do well

I'm the worst passenger int he world but not with Robyn

She was proud to drive right up to her Granddad's front door to say "Hey, Granddad, look at me!!!!"...

Robyn was introduced to a new road feature we just do not have around here: Steep hills

She had the joy of learning to negotiate, both up and down, a steep one with tight bends called Wraxall Hill between Shepton Mallet and Yeovil on the A37. We'll take her up Porlock Hill next

Her 206 is a blindingly good little car. Both she and I love it to bits. It is such an accomplished little thing that does virtually everything very well indeed. After driving dad's Nissan Pixo after the 206, it is no contest. The 206 may be 11 years old but it is vastly superior in every way.

And that full width sunroof

Magic! It saw use yesterday too....
Top

More energy Jim, my god, there'll be no stopping you

never really liked the death sticks as me and my brother call them and you will feel yourself improve great;y as time away from them increases

It's just the first 15 years that are the hardest

myglaren wrote: It's just the first 15 years that are the hardest

I can believe that Steve

I guess we ex-smokers are a bit like ex-alcoholics... one drink/fag and that's it, back to square one

Still, despite a very busy and hectic week, I'm still on the wagon

I have noticed I'm gaining weight though, I guess from rather more grazing between meals. I noticed my work trousers were rather tighter than usual this evening

Not worn them since last Saturday...

I suppose I'll have to go on a diet soon

It's been a busy week at work and every evening this week I've come home both tired and averse to computers. hence no forum activity and nothing done on Project Activa. Still, much of valve was achieved at work and positive progress made...

I hope to rectify the lack of Activa progress this weekend. In the week I received the heatshrink to try a ram repair and today a new Activa Accumulator from Pleiades so I'm all set.

Here's hoping the weekend weather will be fair. I badly need some automotive therapy...
Top

I wouldn't disagree with the idea that changes to the brain from smoking are permanent, but over time the ability to rationalise (dismiss) an urge to smoke, improves greatly.

Bad news is that - from experience - it will take some years to reach this point. I reckon part of the "secret" is an ability to see the change as sort of turning a corner in life. That way it's not like adding a mental burden to the previous state. Semantically, it's comparing the people who say "I'm on a diet" to those who say "I've permanently changed my diet" - one group won't make it...

But - returning to the corner analogy; perhaps there is the "Activa Method" for quitting, where like the car you turn a corner quickly yet remain on the level!
Top

addo wrote: But - returning to the corner analogy; perhaps there is the "Activa Method" for quitting, where like the car you turn a corner quickly yet remain on the level!

Just remind yourself how much healthier it is not smoking and how good to be rid of the addiction and how much nicer everywhere in the house and cars smells. That does the trick..

Got a bit of work done on project Activa yesterday although most jobs were little ones and not worthy of reporting...

Two that were is the MK1 ram repair attempt. It may not work but the MK2 version awaits in the wings...

This is a quick glimpse of the MK1 attempt... 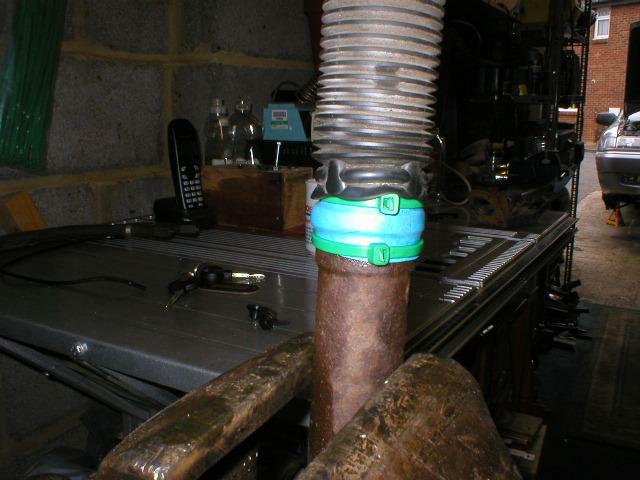 One big problem on the ram front was the issue of the seized flare nut on one of the hydraulic pipes to it. This nut had resisted many attempts to free it off and made ram removal a bit tricky. It was necessary to leave the pipe connected and with the other pipe disconnected, rotate the whole ram to undo it from the pipe. The flare nut had to be freed or the ram could never be replaced.

It was well tight and a weeks' dousing in Plus Gas did not help and nor did bigger and bigger spanners...

In the end I turned up the heat a bit and brought my propane torch to bear on the job. A good heat and I could feel just a bit of "give" in the nut. A bit more heating and a bit more "give"

Success! You just can't beat a bit of heat to shift tight stuff.

As a result of heating, a small fire under the wing had to be extinguished. LHM burns nicely and the ends of the two hydraulic pipes looked like a couple of oil rig flare-off pipes

These are the two pipes in question, showing the flare nuts. Imagine flames leaping from their ends... 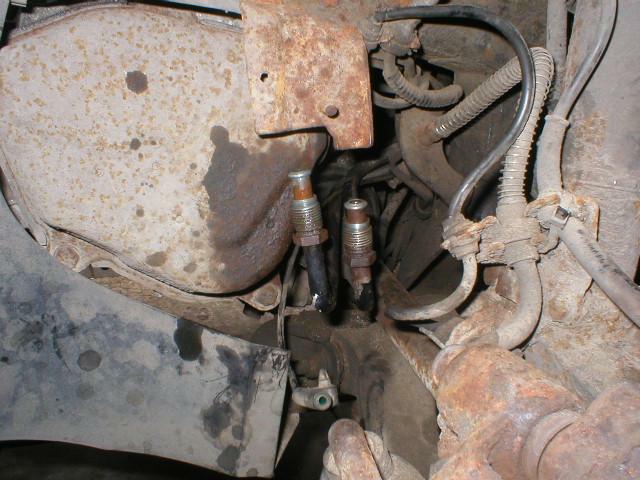 Nice Jim. You have traded the Smoking Sticks for the "Smoke Spanner"

Just think: you can go anywher now without the appendage of fags and lighter. I gave up the mobile phone too.....I only have wallet and car keys now

When removing the pipe unions and bleed nipples from the (very corroded) rear calipers on my first Xantia I was alrernately heating with a blow lamp and quenching with plus gas. Got a bit hasty and did both at the same time - crusty eyebrows time

CitroJim wrote: As a result of heating, a small fire under the wing had to be extinguished.

I lost mine in a gas oven many years ago but that's another story entirely....

My old smoke spanner works well. It's a Calor propane torch that attaches to a standard Calor cylinder. I've got a small burner on it and it gives a flame not unlike an oxy-acetelyne torch..

Been quite a day today. The Activa project is running again and the suspension system is under pressure. Touch-wood, the repair to the front ram appears to be holding but I'm not going to celebrate just yet. I want to see a few hundred miles out of it first.

Generally the hydraulics are good; it holds pressure for ages after the engine is stopped and the tick rate is measured in minutes now with good spheres fitted and the only remaining problem is a very lazy rear height corrector that won't bring the rear up from low without help and will not correct a sit in the boot test.

Once pressure was established in the system, I could then get the two rear corner spheres cracked off and tested. Given that every other sphere on the car was a battle, I fully expected these last two would be as well. They were just the opposite! They came off easily and were found to be OK

Work now moves to the interior and the electrical problems that have their root in the corroded loom connector in the passenger footwell. I noticed today the sunroof has packed up and the feed for that runs through that connector...
Top

Xac wrote:Only you could slip that little gem into the writeup as though it's absolutely normal

After all I've been through with Project Activa recently, a small fire seemed in no way out of the ordinary at all

Just par for the course really

Gosh, never have I had a car with so many issues. I thought nothing could top my V6 for having s much needing doing but Project Activa is beating it by a country mile

Not sure what the fate of the car will be just yet. An MOT is not now far off and it should be on the road thereafter but after that I'm not sure. Having put so much into the car I may not want to part with it even though I can't really run three cars. Time will see...

After the success of releasing the seized flare nut, which involved much work, fire and smoke, when it eventually came free I so badly wanted a cigarette as a celebration of a job done

One thing that was had is that I left off the NRT patches ffor the weekend, just to see, and the old nicotine withdrawl really hit in big-time with virtually all the symptoms you could get

I'm seeing I'll now have a battle to give up the patches! Doctor tells me they'll be weaning me off them very gently and I can see why now.

By golly, smoking and nicotine addiction is evil stuff. I'm told it's easier to kick heroin addiction but I get the feeling kicking a Citroen addiction may be even harder...
Top
Messages: 7774