xantia_v6 wrote: I once designed an electronic circuit in a dream, woke up and drew the schematic, went back to sleep. That design worked when built

It didn't create a spherical forcefield which you and two others fitted over an old fairground ride carriage and took on an adventure into space as explorers, did it?

CitroJim wrote:
So many of my dreams are technical. Must be a good indication of what goes on in my head most of the time

So. Do Androids Dream of Electric Sheep?

Now that is profound

Thats not the picture of what Jim dreamnt of is it

Listen to young Toby there ...doesn`t dream......yeah right. We know what you`ll be dreamin about

Seriously, it is very rare I ever do. Either that or by the time I've woken up I can't recall them
Top

Ahh, the end of a very busy week

Shame the weather is closing in again

I'm all well again now and back to work. Same old, same old. I'm up to my eyeballs at work and despite wanting to take some leave, for the foreseeable I cannot

Hours are long and weekends have become very precious as a result to get done all I need to get done both for the family and for me personally. Time is short and projects and work on the car front are likely to be long and delayed for a while.

Anything I have promised I'll do for anyone will be done but not for a while yet. Work and family have to take priority at this time.

I've not been very active on here this past week. Mainly because I spend all day at work staring at a PC screen (five of them actually) debugging and customising software and quite honestly, the last thing I want to do when I'm home is look at another PC

This week has been a bit warmer and as a result my workshop is a little more habitable and I've been taking advantage of it when I can to get a bit of relaxation in and to get a change of scenery in a PC-free zone. It's good therapy and I have a big Activa project to play with

My Activa project is likely to take a very long time at current workloads...

My workshop had become a bit disorganised of late and these past couple of evenings I've been busy having a sort-out and tidy-up. Last evening I got together a load for the tip and rushed it down there this evening before the tip closed.

This evening I reassembled a 4HP20 gearbox that had been in bits for months as it'll be many months before I will get around to rebuilding it properly and it takes up less space reassembled and it's it safer together as parts won't get damaged or lost.

My ram repair plans have received a little more attention and I hope to report progress soon.

This evening I gave the seized roll corrector mechanism some attention. I could not free it off with Plus-gas or WD40 so took a risk and disassembled it. It is riveted together essentially and I needed to use my hydraulic press to do the deed. It was successful and it is now it bits.

This is it, just before a good clean-up: 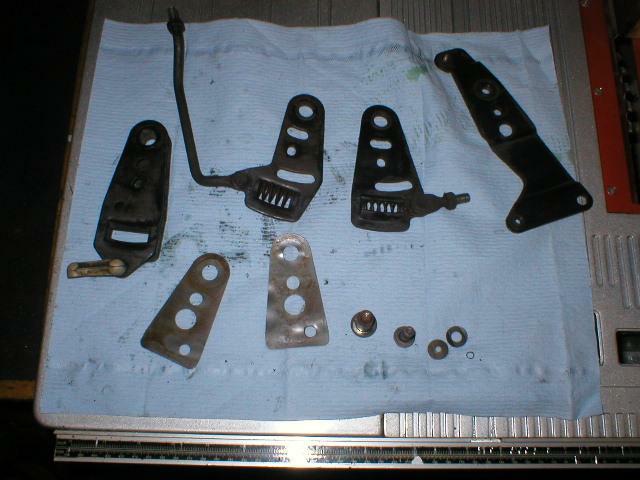 After a good clean and rust removal, I can reassemble it and it should then be good to go again. The rivets (actually the pivots) will re-peen and hold tight again.Looks like they'll only come apart once as there'll be a limit to how many times the pivots can be re-peened.

I'm spending time wit my girls this weekend so not much on the project front is planned although I do hope to sneak out for a bit and try to finish the interior removal on the Activa project and possibly remove the leaky roll corrector for overhaul. The weather may do for that plan though...

My red Activa has been in daily use this week and I really have enjoyed it. This evening though I swapped over to my V6 for the weekend and found that's still a lovely car too. Having a week off driving it made me appreciate all the more its good points

I can't remember, but would there be enough room around the pivot area to replace it with a suitable bolt?
Top

Is that what like an Activa Ram looks with the horns off?

Busy is good Jim..........more money for hobbys and projects

True lexi but if you have money but no time.... That seems how it is at the moment

Still, today has been a good 'un and lots achieved. It's been a not bad day weather-wise so I was able to enjoy the outdoors, some sunshine and play on my project

I was shocked to see an inch of water sitting in the rear seat wells this morning. I knew the car was a bit damp but did not know it had a serious leak. I started pulling the interior out and got to the point of removing the (sodden) carpets when a big storm came on. I was trapped in the car for a few minutes but it was time well spent as I soon saw drips from the
headlining

But no, nothing so simple. After having half the headlining down I found one of the gutter drain spigots was detached from the gutter enabling water in the gutter to run straight onto
the headlining. these spigots are held in place by plastic welded tabs and a spot of mastic. The tabs were damaged, I reckon through extremes of heat and cold, so the spigot was not sealing. A new band of mastic and a ty-rap did the job... 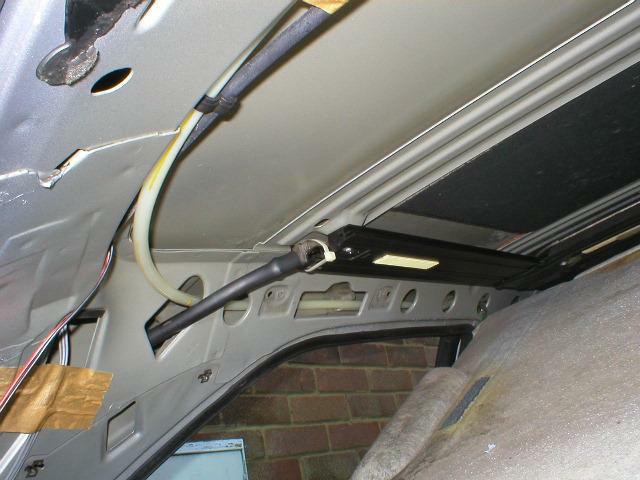 Copious buckets of water seem to indicate the repair is good

The scuttle has been leaking for a while. Look at these connectors in the wiring loom 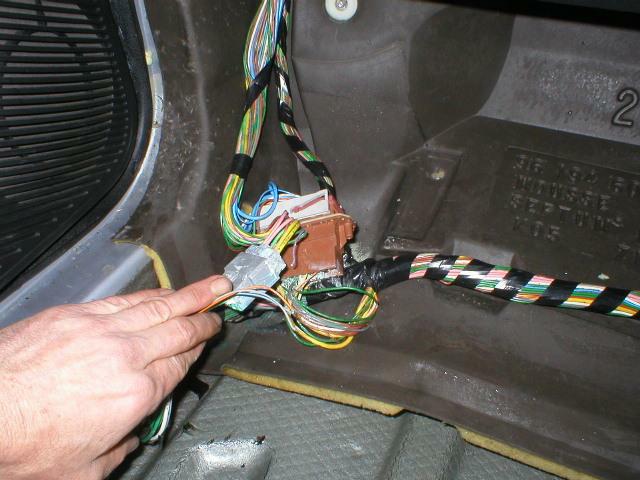 There's even broken wires in there!

Despite all the water, there is no corrosion in the floorpans at all. Shows how well rustproofed the cars are.

Next up was the Activa Accumulator sphere that i suspect is flat. Here is where it lives under the battery tray... Note the battery tray, airboc and air intake pipe removed for clarity. 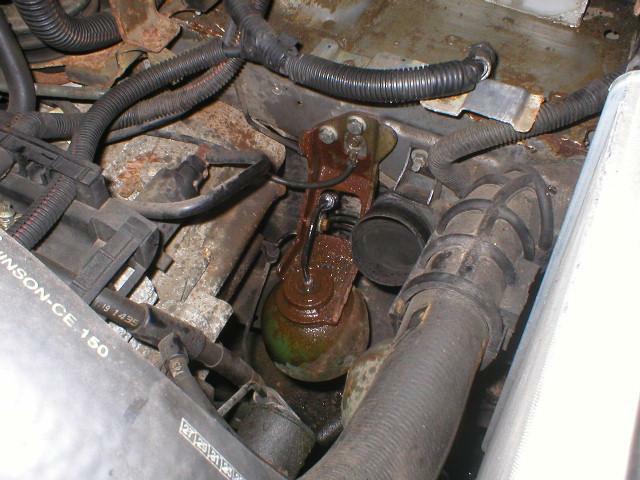 Well corroded. The wet is Plus-Gas, not LHM. Toby had a problem removing his and i thought this one might be the same. It was

The bracket was bending. I remove the bracket complete with sphere and viced it... 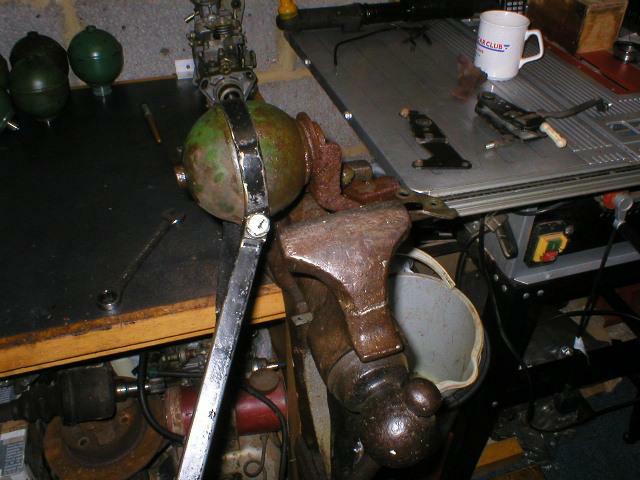 It was so tight, the vice could not hold it well enough to give it enough welly. The bracket kept leaping out of the vice jaws.

In the end I put the handle of the Pleiades tool in the vice and walloped the bracket itself with a big hammer like this.. 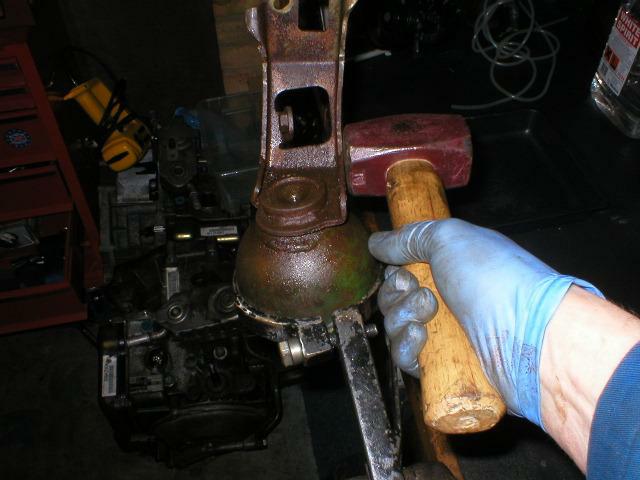 That worked, eventually... What a job. The sphere was flat!

Trooper30 came to visit this morning with his wife's new X plate HDi Xantia for a Lexia session.

I have never seen such a clean Xantia

It looks to be no more than about two years old and is a minter. It even still has its under tray! It really is beautiful...

We did find one of his cooling fans is a bit sick; one is very reluctant to start and often needs some encouragement by poking the blades with a stick!

No car action tomorrow - I'm spending the day with my girls. I'll be good as I've barely seem them in two weeks due to us all being busy so looking forward to that.

Robyn has her driving test booked for April 21

Jim - on that accumulator, how big a job to free the pipework? Thinking of doing mine after my sphere tester comes together soon

It'll be interesting to see what condition the spheres are in.
Top

The sphere is accessible from underneath the car but I reckon, if it has not been off in a while, a removal of the battery tray makes access much better.

Undo the union with a 9mm flare nut spanner. The pipe is held rigid by a "P" clip just above the sphere.

If the sphere will spin off the bracket, this "P" clip will hold the pipe as the sphere rotates off.

If the sphere won't budge than the bracket is easy to remove. Remove the bolt holding the "P" clip, lift the pipe out of the sphere, remove the earth cable in the middle of the bracket and the two bracket bolts. The sphere and bracket will then slip off for more aggressive removal methods on the bench.

Mind though, the sphere and bracket are surprisingly heavy...

My sunroof repair will be getting a good test today. It's torrential rain here this morning

Spent the day with the girls today

As reported, Robyn has her practical driving test booked for llate April so today she did all the driving duties in her 206 with me sitting in the passenger seat...

So far, she has had 12 hours professional instruction and a bit with her mum and she really is getting quite competent.

Her mum, despite being a former professional instructor and now an examiner is not happy taking Robyn out in the 206 because it does not have dual-controls

I have no such worries and found Robyn's driving very good. Living so close to Milton Keynes, she is aleady very proficient at negotiating roundabouts

Fro now on, Robyn will be my taxi

She needs the practice and next weekend we plan a run to Somerset with her doing a big chunk of the driving...

The 206 is proving to be a great little learner car and very forgiving. If Robyn forgets to change gear it does not seem to mind that much as the engine is very flexible and has lots of low-down power.

Had a great meal in an Oriental resturaunt today, Thai I think, and I had some tea called "Gunpowder". Delicious!

I'm pleased to report the Activa project is now water-tight. My sunroof repair has been a success

The carpets are drying out nicely too, being spread around the house...
Top

Ah, so the driving test waiting lists haven't decreased then

Cor, it must have been nearly two and a half years ago when I passed mine

When I first started driving (I went out with a parent once, before decided that going with a local driving school would be a better idea) I was shocked to find that when the car went into first it moved forward, I had previously had the idea that the gas pedal was needed to get it moving so I promptly slammed on the brakes and stalled

Oh how times have changed!

Robyn will get some good practice on the back roads around here as you know, everywhere I seem to go its single track roads!
Top
Messages: 7774