lexi wrote: Get one opened Jim till we have a look

I've a test bed for these things now lexi so in the fullness of time!

Amongst other things, my latest arrival has suffered an MOT fail on leaky rams... 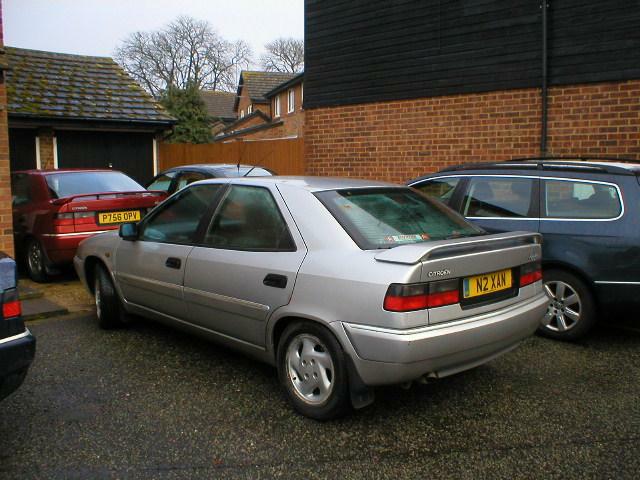 A very original, unmolested Activa built on November 30th 1995 so a real early one. One of the first maybe?

She's in need of some TLC but pretty straight and clean.

Despite the private plate, she's a genuine N registration. Not had a chance to give a close look just yet.

Looks clean! Very nice in silver but that red is lovely.
Top

lexi wrote: but that red is lovely.

I don't know if it was as a result of the journey to here on a trailer but she was covered in salt!

Before looking at 'XAN I gave both my red Activa and my V6 a good wash and interior clean, the first of 2010! Then V6 and I took a trip to the tip with 25l of waste oil and on the way back, I dropped the V6 at her holiday home just up the road from me.

The it was time to give my red Activa an oil and filter change. That's one reason why I had to take waste oil to the tip. I had no more room for waste oil

Engine runs very sweetly and she's just been serviced as part of her failed MOT. So new oil and LHM amongst other things. She's always been dealer serviced and came with a sheaf of history a mile thick.

She's very early (RP6960) and has no aircon and the full black interior, a black roof lining only broken by a sunroof! Everything works too!

I'm surprised how different this early Activa is. No fake wood on the dash and no wooden gear knob

It does have a upmarket wireless (but no CD player) and the nice chunky leather steering wheel. It looks like a very dark SX inside

I thought initially the hydractive ECU was dead but no, it turned out to be a couple of duff door switches confusing me..

The front electrovalve is showing faults on the Lexia but just needs the diode mod carrying out. It starts and stops and you can hear the ECU trying to reset it.

The heater matrix is bad and the car is rather damp inside as a result. It arrived very steamed up..

The front ram is a bit wet and the rear a bit damp. Last week it failed its MOT on just the wet front ram. Not yet had a close look at it to see exactly what the problem is.

I had her transported down after putting a request up on the Shiply website. It worked a treat and is well recommended if you need a car moved.

I wish I'd kept the tailgate off the V6 we broke. The tailgate on XAN has a small hole in it; it looks like the car was reversed into something sharp. I'm sure I can do a good repair with a touch of filler though.

That's the initial. Hopefully, soon be back on the road

Sounds good Jim, I think that there are one or two other bits you would have kept from the V6 had you had a premonition...

Is the black upholstery leather?

I am sure it will be nice car when you are done with it.
Top

Its a nice looking Xantia Jim, good colour and it must be one of the very early Uk registered Activas, which is nice. I like its number plate too.

I liked the interior in the early Activas, a nice dark clotch with the small coloured stripes and sports seats.

Ours was also a N plate with no-wood interior, just all black.

How many miles has this one done Jim?
Top

xantia_v6 wrote:Sounds good Jim, I think that there are one or two other bits you would have kept from the V6 had you had a premonition...

Not much went to the scrappie Mike. Mainly a bodyshell, tailgate and rear doors! Practically everything else was removed...

No, it's not leather, the standard Activa tartan..

One thing I forgot to say earlier is that this car is totally unmolested and has not been bodged anywhere and still has it's aux belt cover. How rare is that?

It's so refreshing to have a car this old that has not been subject to amateur repairs or mods...

Definitely one saved from the Puggerisers

I must admit I rather like the dark look even though it came as a complete surprise to me. Reminds me of my old 205GTi in some ways...

The seats are very comfy too...


Citroenmad wrote: How many miles has this one done Jim?

150K but you'd never know it. The engine is incredibly sweet, the sweetest 2.0 TCT I've known so far...
Top

Yes, probably was Jim, im not sure how early ours was, though it was the same spec as your new silver one, si it must have been a fairly early model too. I so want it back

Average mileage then, they seem good for it.

You've got me looing at old Activa photos now, nice to know there is someone out there saving them.

RP 6960 does sound early - does anyone now what the earliest figure
is for the UK then? Your new one is close to a couple of mine Jim but
isn't quite the next one: my first green one is 6945, the newest acquisition
blue one is 6939 and my A6 TVA is 7036 and I thought that was early!!

Where on earth did it materialise from - are you going to say?

andmcit wrote: Where on earth did it materialise from - are you going to say?

Oh really? I thought id not seen it advertised, though you rarely do at the moment.

Was its reg original? If it was an earlier one there is a chance it might have been a Citroen car or demo?

Nice plan to store your red one, its a minter. So this will take over as your daily Activa and you will have your Dantes for your best and shows?
Top

It was never advertised as far as I know Chris. Word of mouth was the conduit.

The registration it carries now is not the original. It was re-registered in 2006. It's original N registration originated in Carlisle so not a Citroen demonstrator by the looks of it... Last three letters were YRM. Looks like it lived in Carlisle all its life...

That's the plan Chris. This Activa will make a smashing workaday car and save my red one. It'll blend in and looks even more of a Q car than the red one. Silver even hides the Activa badges on the doors...

Just got to find good covered, dry, secure storage now. A tall order around here. It really upsets me when I see perfectly good garages used as rubbish stores or worse, turned into dining rooms

Most cars are now supersized so won't fit in a garage any more - unless
you climb out of the car's window and through a trap door in the roof.
Mind, Tesco's etc seem to think we all still drive Ford Anglias...

There's only two normal spaces left now and they're taken up with bins to recycle things you never knew existed in the first place. Every other space is either Parent and Toddler, Elderly and Infirm, "I'm/my car is too important to park in normal spaces", reserved for buses and taxis, electric/hybrids or Disabled.

Then you have to run the gauntlet of a gang of dodgy looking Eastern Europeans demanding monies to wash your car. That last aspect annoys me most. When I go to the big T I go for food and nothing else and I certainly don't want my car washed. Seems a bit third world to me to be accosted for unsolicited goods and services when all you want to do is get in there, do the necessary and get out again ASAP.

Mind you, said Eastern Europeans are a tough breed. They were still peddling car washes even in the depths of the big freeze

I was impressed...
Top

As much as i like a lot of the Xm and Xantia colours, silver is always my chosen colour for a daily driver. Its easy to look after, looks cleaner longer and hides minor scratches. Unlike black, i never want another black car. Saying that id like a red car next.

Actually i tried the Xm estate in a garage of a fairly modern house recently, with it about half an inch from the end wall it was still sticking out about half a metre! Id like to know why parking spaces are not getting any bigger, yet everytime a new car model is released its larger then the previous.

Our recently updated tescos car park is tight, there are so many turns which requires full lock on the steering in order to get around, there are high curbs to get in and out which take a good hammering as its so tight. At first it wasnt clear where you needed to follow so there were numerour crashes and people stopped going. They have now put up bollards and metal sigh posts which are demolished on a regular basis. All close spaces are reserved for the disabled, parents or people who think they have the right to park there. Everyone else is left going around and around on full lock waiting for a space. As there is so many full lock turns the road becomes almost leathal in the wet, due to the quantity of rubber left behind. Its crazy, and the mini tescos is ever worse, huge curbs, full lock turns. Some large 4x4s have to drive over the pavement of the houses opposite just to get out of the carpark. Its madness. Mind, before long people will have lost all of their cars down the huge crators which are appearing in every road.