CitroJim wrote: In the event the converter did come off and left the bearing and oil seal in place but close examination of the TC neck and bearing shows damage similar to what we found in xantia_v6's gearbox but less severe.

Does the bearing look melted through lack of lube, or is there any sign of contamination?
Top

Just yet Mike, because of the stator extension being in the way, it's hard to see the bearing clearly but it looks a bit like a big end shell that's been "run"

More will be known as soon as I split the 'box to see what else has failed.

Lubrication failure does seem the likely cause but not due to Dexron directly. What was in there was very new.

I'd have loved to have seen (and smelt) the old oil.
Top

CitroJim wrote:I'd have loved to have seen (and smelt) the old oil.

Whatever turns you on

Jim, has the Lucas epic gone back together ?
I've been trying to keep up with your blog but it gets so many posts I may have missed it.
Top

Yes, it has but only on a temporary basis. I had it all in bits back along and then I was called up for gearbox work which is still sort of ongoing.

As soon as time permits, I'll get back to it Mark. Upshot was that the pump, apart from being a bit gunged up, was in fine condition and after a rebuild should run again fine.
Top

It`s no wonder cars weigh so much when you look at cutaway of V6 engine bay. I don`t know how I have managed to get my big hands anywhere in between that stuff in last few weeks

Yes, it has but only on a temporary basis. I had it all in bits back along and then I was called up for gearbox work which is still sort of ongoing.

As soon as time permits, I'll get back to it Mark. Upshot was that the pump, apart from being a bit gunged up, was in fine condition and after a rebuild should run again fine.

AH so Ididn't miss a post then, I hope that when it's back together it'll be put to good use one day and save a 2.1 from the crusher.
Top

Spannering therapy was called for this evening

It's been an excellent week really, totally different to last. The forum seems to be happy on its new server and work has gone very well. I scored a personal triumph this week by really getting to grips with a piece of software I have been tasked to become very familiar with. It's an incredibly complex thing called Mirror42 and it's used to generate our Key Performance Indicators (KPIs) and tell management how well we do our work

Enough of that. Tonight curiosity got the better of me and I pulled the gearbox from the scrapped V6 apart. Some bolts were incredibly tight and corroded and I broke my T40 Torx bit on one of them

Finally, it yielded and it came apart.

The 'box was still working (just) but was whining very badly and the torque converter neck had welded itself to its bearing.

Inside, apart from the bad bearing, there is nothing the matter. Everything is serviceable, including the oil pump except for the aforesaid bearing and maybe the torque converter.

The failure was caused by lubrication failure resulting from a clogged oil filter. The filter is so clogged, oil will barely run through it.

So,a refurbished converter, a converter bearing, a filter and a gasket set and the 'box will be good to go again despite it's brush with a fill of Dexron

Here's a shot of the failed converter neck bearing. 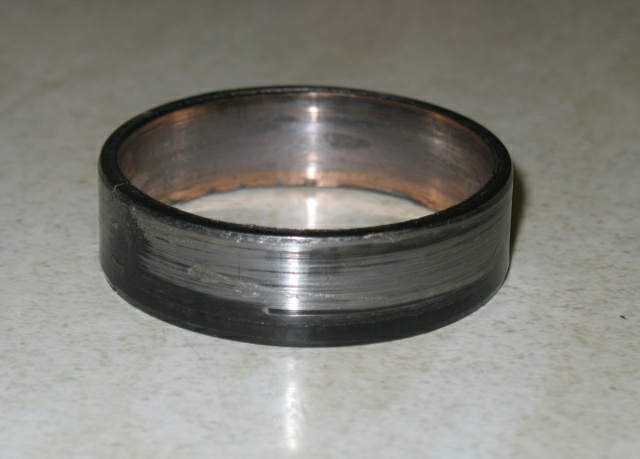 Scoring and fretting can be seen. It's like a big end shell in construction. basically a soft bearing surface on a steel backing. The soft stuff is mangled and mostly gone. It welded to the TC neck and the steel under part has spun badly in its housing - hence the noise.

So, again, at say 120,000 miles and no record of regular oil changes, if you want your V6 gearbox to carry on living, whip the engine out, split the gearbox (no special tools needed) and replace that filter. Cost about £50 with gaskets.
Top

My life is dominated by the number 42 at the moment it seems. I've just noticed my blog is now 42 pages in length

Eh? Have you been on the sauce?
Top

I'm a fan of ROTFLMFAO.
Top

Eh? Have you been on the sauce?

HitchHikers Guide to the Galaxy Richard!!!

Indeed Gareth, a lot of the HHGTTG stuff does have me ROTFLMFAO quite frequently 8)
Top

There's definitely an alternative career in autobox repair for you Jim. Shame they're not designed to make a fluid and filter change simple, although that's probably not by accident.

Computer systems at my employer seem to work on a SISO basis, IYKWIM!

CitroJim wrote: The failure was caused by lubrication failure resulting from a clogged oil filter. The filter is so clogged, oil will barely run through it.

Those bearings need oil pressure to operate, so maybe the filter got to the satate where there was 0 pressure at idle, and that killed the bearing?

That could be almost independent of the original symptom (lack of forward drive) caused by lack of pressure at higher revs?

BTW, what is the filter clogged with, and where did it come from?
Top

Excellent stuff Jim. Apart from whipping out box it must still do some good to change out oil anyway?. That oil is usually carring fine particles around.

Those HP422 AND HP424 Boxes in Landrover can be sump pan dropped and filter changed. They also run on Dexron. Tell me this? Is it possible that ZF merely changed the lube spec on 20 box to the Esso semi synth because they knew it would be in for life?
Or would that box have run with Dexron from the factory at new? Obviously you cannot use Dexron but would that be more to do with the mixing issue? I am just curious as to the difference between these similar high tech ZF boxes which take Dexron and our 4HP20 that don't.
Top
Messages: 7774