It's a beautiful sunny day here and perfect. Just about to crane the gearbox back on the engine and in she goes...
Top

Good point Jim, however as Xantiaman says many mechanics dont know how to problem solve anymore.

To give you an example, at a garage in Liverpool who will remain nameless....I showed them the two sections of LHM pipe i wanted to join back together.....I asked him if he had anything to join the two sections together so it wouldnt leak...his answer? "You will just have to replace the whole pipe"

I asked one of the other mechanics (the one who knows what he is doing) and he gave me a pipe connector with differing widths each end and i pieced it back together succesfully.

The engine went back in like clockwork! The weather was perfect and the job went really well, even the exhaust to cat connection

We started out by doing a few small jobs on the engine, fitting the new torque converter, filling the gearbox with liquid gold (oil) and slowly spinning the converter by hand to prime the gearbox oil galleries. We knew when it was primed as the oil level in the 'box fell from the max to the min marker on the dipstick. To help matters along, we also filled the converter with oil before fitting.

Then it was a matter of mating the gearbox back to the engine using the crane, refitting the TDC sensor (tricky) and connecting up the coolant hoses and refitting part of the exhaust header assembly

Then it was just a matter of dropping the engine and gearbox back in the car.

One thing to note is that the lower engine mount must be fitted whilst the engine is still dangling on the crane, otherwise it's impossible to get the rear bolt in (where the fork bolts to the subframe) as it fouls on the rear bank exhaust header. When we did my V6 we found this out the hard way...

MikeT called on the phone at just about the time we'd reached this stage: 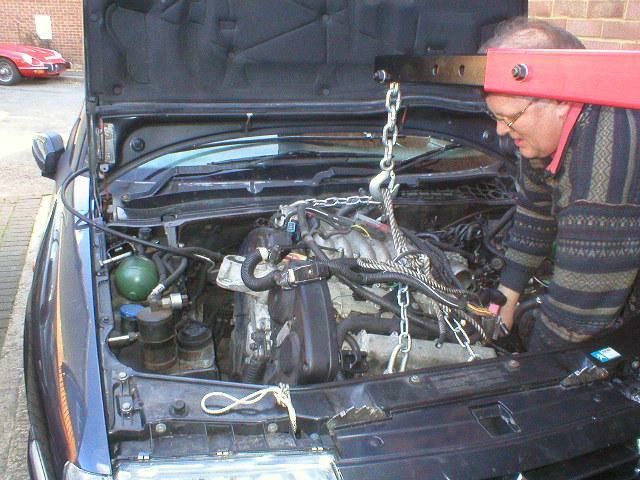 Any earlier would have been problematical but at this point Mike was refitting the gearbox mount. I'm happy to say that despite appearances, the jib of the crane was a lot further away from his head than it appears

When we removed the engine, we put all nuts, bolts and small assemblies in marked plastic bags and by the end we had a big crate of them. Today it was a case of picking the right bag for the job at hand with no searching and wondering which bolt went where.. By the end of the afternoon the number of bags had been reduced to just three!

Bad light stopped play but now, essentially, it's just fluids and a couple of electrical connections before we go for a start-up...
Top

Despite heavy rain overnight, today, although starting off horribly grey, came good in the end despite it being a bit chilly.

After essential fluids were added and a the last few bits refitted, the V6 burst forth into life

Coolant bled, gearbox topped up (a lot!) and brakes bled after an LHM change, she was all ready to hit the road.

A very brief test run, where it was noted the first few changes were a bit rough, was immediately followed by me driving the car 30 odd miles (including motorway!) to Mikes house. It was a bit nail-biting and a test of our workmanship but she did it fine and on arrival there was no leaks of any essential fluids. That's a good start

In driving, I found the car felt quite different to my own in the gearbox department and in particular, the first to second change was a bit harsh whereas in mine it's smooth. Conversely my second to first downchange to a halt is no really 100% smooth whereas in Mikes it is. My 2nd to 3rd change can be quite slow on light throttle whereas no sign of this in Mikes. My 'box was my first go at a rebuild and is a real mish-mash of all second-hand bits so it's not entirely surprising it's a bit challenged really.

More worrying was when Mike's suddenly dropped into third emergency mode. We went for lunch and on the way back it did it again. Worrying. Back at base, we ran a Lexia diagnostic and that threw up a gear coherence fault. Looking at the diagnostic detail, this can be caused by any number of possible things, including the multi-function switch that tells the ECU the gearstick position. Here maybe a connection to another problem. In the past the gearbox has dropped into third emergency for no real reason (full Story here) and has had a habit of blowing the injection fuse (F7) in the engine fuse box.

According to the wiring diagrams, the injection is supplied by F4 but for some reason both on my and Mikes V6, F7 does this job. It also supplies 12v to the gearbox multi-function switch! So, are the two faults related? Possibly... It is possible the internals occasionally short to the metal body and pop the fuse as well as confusing the ECU as to gear selection.

Anyway, back to the rough changes. I reinitialised the gearbox ECU just before the first start-up and then the gearbox did nothing but idle in P for a long time whilst the coolant was bled, the gearbox oil topped up and the brakes bled. I reinitilased the ECU again just before Mike departed for home and he now reports things are much better.

So, it really does seem from this experience that if the ECU is reinitialised it is important to drive off straight away on a varying route as soon as possible afterward.

It's been a good learning experience and our collective knowledge of these incredible gearboxes has been somewhat added to, not least of another expensive failure mode...

Mike, thanks for the lunch today

That really was a real gem of a venue!
Top

Fantastic Jim ! All done outside in proper Ant Mechanic fashion? It`s some sight that lump shoehorning itself into that space. Amazing what you have learnt about this stuff now over the period.
Top

The aforementioned transmission has got a fault, which may be related to the replacement final drive.

Jim will be along shortly to give the some technical details, but the champagne is on hold.

The symptoms are that the transmission drops into limp-home mode whenever 3200 RPM is exceeded in any gear.
Top

My mistake. Rather than replace the failed output gear bearing, I elected to use a good gear and bearing from my spares gearbox originally from a crashed 406 Coupe. What I did not appreciate was that the 406 Coupe version of the 4HP20 use a different final drive ratio to that in the Xantia

The output gear is significantly smaller and as the ECU output speed sensor reads the rotational speed of this gear for gear coherence checks, that's why it's logging a fault. It is seeing the output gear spinning too slowly at high revs for the gear selected electronically when referenced against the input speed sensor. I would have thought the ECU would have coped on initialisation but not so.

A bit of learning the hard way I guess...

Nothing for it but replace the bearings on the proper output gear to restore normality. To this end I have been working on how to do that this evening.

First task is this slotted nut. It's TIGHT. 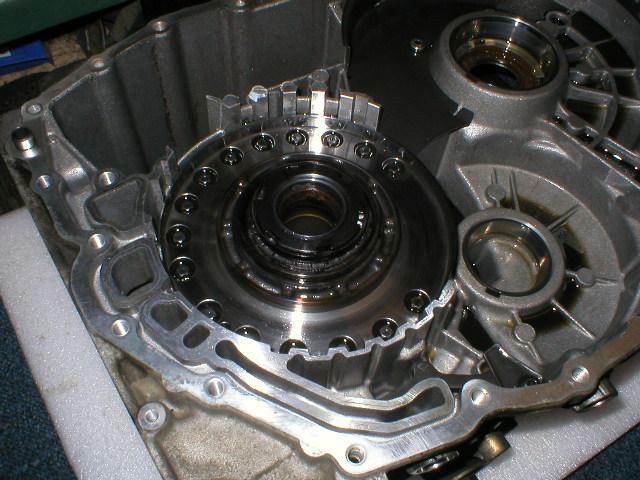 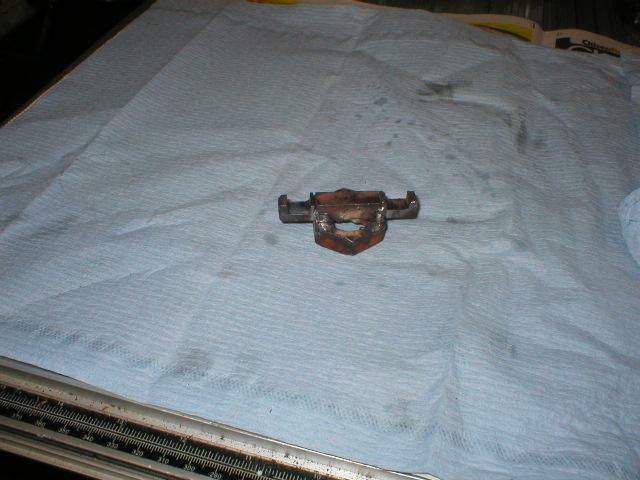 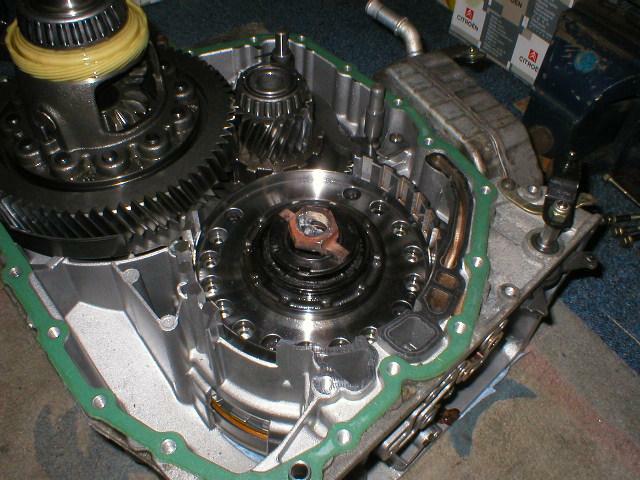 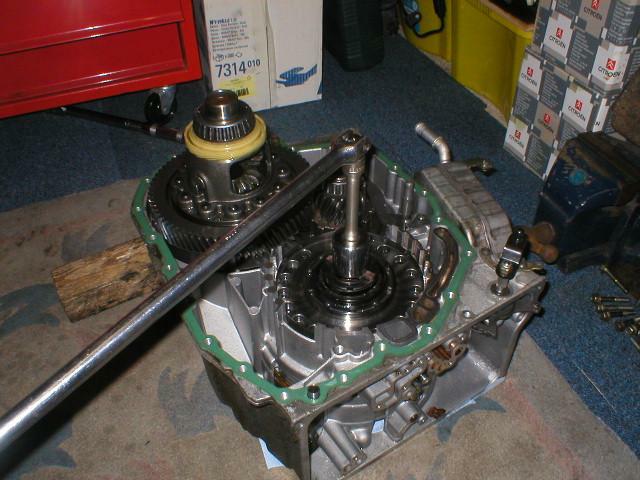 Nut off and the gear pressed out. The top bearing was seized and spinning in it's housing. The bottom one was basically OK.

I now have the problem of removing the inner race from the bottom of the gear shaft. I'll sleep on that one..

I'm currently cooking the housing in the oven to see if the outer race will drop out with heat. 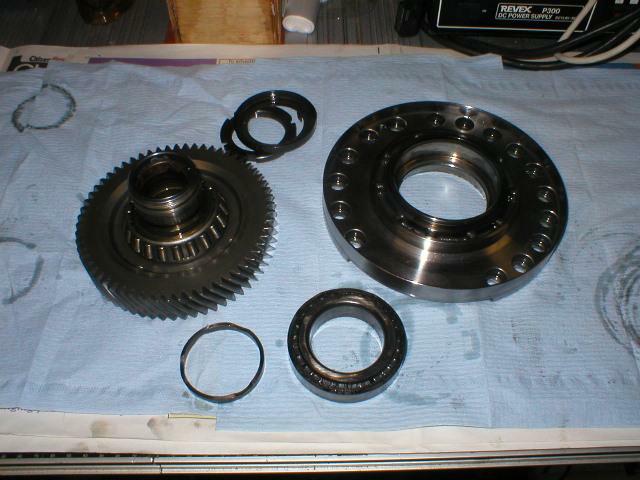 The bearing housing (also the F Brake piston bore) is wrecked where the duff bearing has been spinning.

Still, at least the engine will come out easily this time

Not good Jim.... I wouldnt have the patience, most likely would leave it for a while to regain enthusiasm. Hope it all goes to plan this time.
Top

I suppose you could say the immune system rejected the transplant.

I have done a bit of googling, and it seems that all the es9j4 PSA applicaitons use the same output ratio, but the other engines version of the 4HP20 has a different ratio (I suppose it doesn't rev as high).

BTW: Thanks for for your continued patience.
Top

Ah, that would explain it. I always assumed the spares 'box I had came from an ES9J4 engined Coupe but if it came from a DW12 or EW12 than that would be it. Bingo!

I only saw the gearbox alone when we collected it, sitting in a puddle of water so never saw from whence it came...

No worries on the patience side of things

Success with the bearings this evening using traditional methods, both the inner race at the bottom of the shaft nearest (and flush with) the gear and the outer race came out easily enough and without damage

In the end I managed it fine with what I had and at zero cost. Years of doing Mini wheel bearings has finally come in handy!

Refitting the bearings is a different matter and a mandrel is essential. The bearings are far too big to use the traditional method of using a big socket so one had to be made. The only suitable material I had was a big billet of aluminium alloy. It took and hour and a half to machine it on the lathe...

The mandrel, complete with the output gear assembly in all its component parts can be seen in this picture: 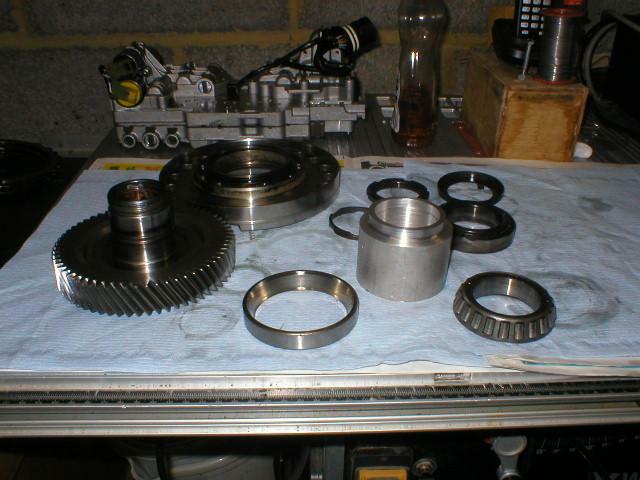 So, for this one job, two special tools had to be made!!!

The car is coming back on Thursday. I'm looking for a volunteer to help me lift the engine out again over the weekend as Mike is away for a while.

Full board, food and lots of tea is on offer to anyone who wishes to give me a hand and learn how to lift a Xantia engine. It's easier than it looks but does need two people... I'd never risk it on my own...

EDIT: Looking at the bearing outer race in the foreground, wear on it is quite easy to see. And that's the good one of the two. The other one is welded solidly together. I tried to press it apart this evening and gave up at 5 tons pressure...
Top

How I envy you and your workshop Jim! I have to make do with my kitchenette - I have a workmate instead of a cooker

I wish I could offer assistance and gain the experience but it's just not possible for me to make a promise this side of the wallet-magnet (Xmas), sorry

Jim, if you wouldn't mind at all having a hand from an engine removal novice then I could well be up for assisting. Which day would you be thinking as I work all day Saturdays

Would give me a chance to stretch the Alfa's legs too, it needs it.

Let me know what you think and I'll check if I'm doing anything already (almost 100% I'm not - I never do!)
Top

The only thing that will put it off is heavy rain. Sunday would be the best day as Friday evening and Saturday will be the day for the preparation so on Sunday, just the lift out and gearbox separation. Three hours tops.

Be good to see your new wheels too.
Top
Messages: 7774