Not car related but it may be of interest to you in particular Zel... 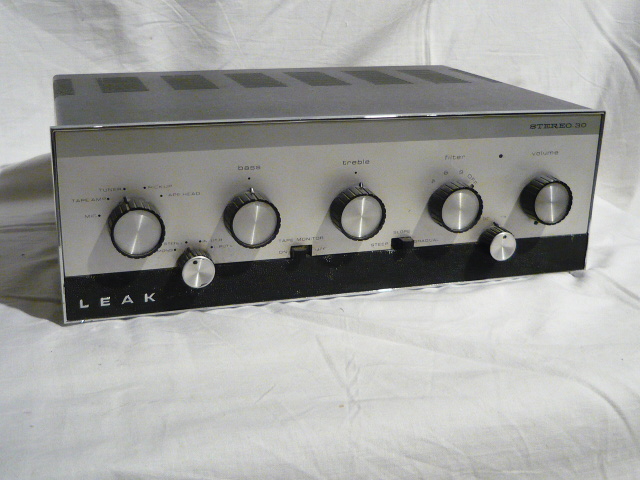 It was a non-worker when it arrived despite the eBay ad saying it was good but after replacing a couple of electrolytics it works beautifully , sounds gorgeous and goes with my Leak Troughline tuner a treat...

I'm rather delighted with it, it has that lovely germanium transistor sound about it. Not far off the sound of a valve amp

Not car related but it may be of interest to you in particular Zel...

It was a non-worker when it arrived despite the eBay ad saying it was good but after replacing a couple of electrolytics it works beautifully , sounds gorgeous and goes with my Leak Troughline tuner a treat...

I'm rather delighted with it, it has that lovely germanium transistor sound about it. Not far off the sound of a valve amp

How about a couple of these to keep it company, and brighten things up?; 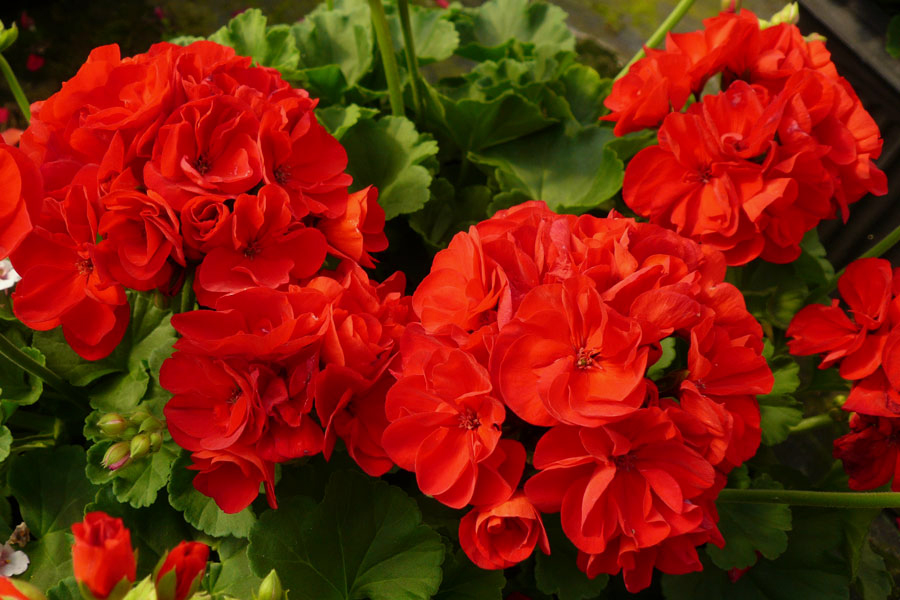 Hell Razor5543 wrote: How about a couple of these to keep it company, and brighten things up?;

But yes, I must agree, they'd look lovely by the sides of it and they are actually one of my favourite plants

Not quite as old, I have a 1971 Sansui AU505 amp, which sounds similarly warm and lovely. Not a single i.c. in it, all discrete transistors. Sansui actually shipped these complete with a beautifully drawn circuit diagram! Currently being used to provide some outdoor sound, with CD/iPod, and a couple of home-built speakers in some fir trees.

Interesting about the capacitors; I'm told that the main PSU caps deteriorate with age, and would benefit by being renewed.

Few other old but still working bits include a Garrard 401 deck with Shure (gets a bit of use transcribing LP to CD via AudioCleaningLab), and a stowed-away Sony ST88 tuner (the bookshelf one with the big circular tuner scale).

Hell, how did you get me going on all this???
Top

CitroJim wrote:I'm rather delighted with it, it has that lovely germanium transistor sound about it. Not far off the sound of a valve amp

There was a noticeable hiss from it at low volumes.
As there was an electronics repair shop in the building where we lived I took it to them to see if they could hush it up but they maintained that it was the Germanium transistors that were noisy and the work involved to change it to silicon transistors would far exceed the cost of a better amp.
Kept it a long time and then a wire on the volume pot came adrift - it had been repaired once before.
Soldered it back in place and when I turned it on -

So bought a nice Marantz amp that was 100 times better.
Eventually - trying to get some sound out of it at first was proving impossible until I pushed the 'speakers' button - at full volume.
The guy who lived next door came in to see what was up

Odd that B&O and Marantz are all actually Philips.
Top

And I love my NAD's

Amazed to see these are going for what they are......luv the sound from it, always have esp via these Very nice Jim! Never had anything quite that posh here.

My main amp is a Pioneer, model number escapes me right now, but it's from that late 70s/early 80s period with the 1/4" thick brushed aluminium faceplate, VFD vu meters etc and it sounds really good. Cost me £20 from Cash Converters...and nearly gave me a hernia carrying the thing back to the flat. The function switch is a bit touchy sometimes and I really should actually sort it sometime...as it is though I only use two inputs regularly, phono which works just fine and my laptop usually jacked into the tape 2 monitor input which has its own switch...so it doesn't actually cause me issues just now. It's playing through a pair of Pioneer CS-585 speakers I inherited from my grandfather (have tried many others over the years but always go back to these ones as they just sound "right" to my ears), with the low end given a helping nudge by a Frankenstein's monster like creation that lives in the corner based around a stupidly large automotive subwoofer running from a horribly hacked PC power supply (and the power switch is the hazard light switch from a 1979 Volvo 240). It's turned waaaaaaay down, but really does add a lot of extra depth - especially to live and orchestral pieces I find. ...plus it is fun making the windows rattle sometimes! Sure I've got a photo somewhere...
Top

I used to have an old HMV wooden radiogram. By far the best stereo I've ever had. Volume and quality! You could hear the drums echo round the studio with Sky turned up loud! Regret letting it go but nowhere to put it.
Top

Great to see all this vintage audio

it's easy to see why Leak eventually went off the radar. technically it is very, very good but against some of the rival stuff it just has no 'bling' value and is a bit plain and functional. In the 70s we started to see a great move to style over function and the likes of B and O and Marantz really show that to a great degree. Audio performance was not anything special and build quality was suspect in some of it but by golly, they looked good! Leak stuff remained true to its founding principle - high quality in both build and performance.

I like the germanium sound personally, a bit of gentle noise adds character as far as I'm concerned but to be honest, my Stereo 30 is very quiet...

Generally electrolytic capacitors are responsible for many faults but when they fail is a bit of a lottery really, some seem to last for ever and others just fail for a pastime. I only ever replace failed ones and don't generally go for the 'wholesale replacement' policy of some restorers. If they still work then leave them. If they're duff then replace them..
Top

Way back in the 70's my dad got a crystal tuned sailor marine radio in the house so we could communicate with him when he was away at sea. I wish I had kept it after he died, it got given away by my eldest brother as he had no interest in it, and I wasn't quick enough to lay claim to it. I suppose I could have just taken it while dad was still alive, but I don't do that kind of things.
Top

For me, a crystal set (wound cotton-reel, cat's whisker, varicap, headphones, 60ft aerial and earth) built with my Dad when I was about 7 years old, and then later a 3-transistor radio, run from a PP3 and built into a polythene butter dish, from a BBC children's tv programme. They published a circuit, and I remember buying the bits (including a germanium transistor, at about £3 - a lot in 1961) at City Radio in Ealing Broadway. A headphone jobbie once more.

By 1965, I was going to hi-fi exhibitions at London and Heathrow hotels, and encountered some seriously good stuff. Remember Quad electrostatic speakers (at the Russell Hotel), and realising these were the first speakers that I had heard where a piano actually sounded like one.

Another surprise was what certain small "monitor" speakers could do. Walked into one packed hotel room, where a Revox (R77?) tape-deck sat out-front, with a very large pair of floor-standing speakers to left and right. The tape was run, and the sound was amazing! Nodding approvals all round, and peering forward to see what those speakers were. But then the big speakers were revealed to have no connections, and the thin curtains behind the display were drawn aside. What sat behind were a pair of Rogers-BBC (LS3?) tiny bookshelf speakers, on head-height stands. The demo continued, to the sound of jaws hitting the floor and eventual applause.

Then started an enthusiasm for KEF. In 1972 I built a huge pair of asymetric corner speakers (based on KEF Concertos: B139, B110, T27) weighing around 70kg each. Used these at home until 2001, and when a handy sales bonus came my way, I invested in some off-the-shelf KEFs (a pair of Reference Three's), and put old faithful Sansui into retirement, replacing it with an Audiolab 8000LX, and a DAB tuner. My 1972 Sennheiser HD414X headphones (bought new for £10 in Boots, of all places) still sound terrific, and have seen off a few pairs of Bose and other hyper-expensive and rubbish cans which have appeared from time to time.

CDs and digital broadcasts changed everything, and our tastes in music are fairly wide. Classic FM a daily companion, and a shelf-full of CDs with all sorts. The KEFs do great justice to Mahler 8, Simon Preston, Karl Jenkins, Hilary Hahn, Celine Dion . . . and the BBC Proms, which can be an audiophile's delight.

One of the joys of life.
Top

white exec wrote:For me, a crystal set (wound cotton-reel, cat's whisker, varicap, headphones, 60ft aerial and earth) built with my Dad when I was about 7 years old, and then later a 3-transistor radio, run from a PP3 and built into a polythene butter dish, from a BBC children's tv programme.

I did just that getting on for 50 years ago now!

My Dansette record player blowing up in 1971 was what started me.. I watched in fascination as a neighbour, who fixed TVs as a sideline, fixed it for me and that set me on the road to my future career. I learned radio and electronics as a kid and a few months after my Dansette episode I was fixing radios and then fixing TVs, including early colour and this earned me much pocket money

I worked from then on in or local TV and radio shop in the workshop during all school holidays and weekends until I started work as an apprentice Radio Technician. I then spent the next 25 years as an HF radio comms engineer until it was made redundant by the coming of the Internet and satellite comms. I then moved into IT - the worst mistake of my life

I still love all radio comms (I'm an active Radio Amateur) and all things electronic with a definite tilt toward the vintage end, most especially stuff with valves...

Virtually every piece of electronic stuff in my home is vintage, even my TV - it still have a cathode ray tube in it!!! My wirelesses are all in excess of 40 years old and mostly valved! Most of my computer gear is not very new and up to date either... I'm still using 10 year old laser printers very happily...

The old stuff is good!


white exec wrote:Classic FM a daily companion, and a shelf-full of CDs with all sorts.

Same here but with the inclusion of the BBC WS and Radio 4 abut Classic FM dominates these days...
Top