Citroenmad wrote:Oh, are we going to have a bit of a Citrojim boot sale going on at the CXM?

I'll see if I need any bits

CitroJim wrote:.. I can recommend Chris and Liam as top blokes for tidying up and sorting out too...

Oooerrr, not sure about that, they might scratch my 24v XM, or the SED....

CitroJim wrote:.. I can recommend Chris and Liam as top blokes for tidying up and sorting out too...

Oooerrr, not sure about that, they might scratch my 24v XM, or the SED....

Knowing them, they'll scratch all three

I really enjoyed CXM this year, possibly the best rally I've ever attended

I didn’t think I overdid it at the weekend by my former standards but my mind and body definitely had very different ideas and it wasn't until Thursday that I began my journey back to the land of the properly living...

I will say that CXM was worth the suffering...

Good job I recovered enough as on Friday morning early I needed to take Robyn and Greg, her intended, to Gatwick to catch a 05:45 flight to Corfu. It meant we had to be there at 03:45 latest

We went in New V6 and all was great, clear roads and a purring car... We arrived massively early. Gatwick, as airports go is good but short-term parking is expensive. For the two hours I was there it cost nearly a tenner

After seeing them off I took an early morning run back to the new Cobham Services on the M25 between junctions 9 and 10 for breakfast. Lovely services. They had just opened the day before and have the advantage that from them you can effectively do a U-turn on the M25 which was perfect as I took the opportunity whilst I was down that way to pay a visit to a friend in East Grinstead.

I then retraced my steps and called in on DickieG on my way home. All in all an excellent day indeed

I'd not slept for nearly 24 hours and then slept for 11 hours absolutely perfectly, no wake-ups and no dreams. Excellent. I'm not feeling bad today although not exactly lively... Tomorrow may be the show-stopper but if I don't overdo it today perhaps it'll be OK. I don't fancy loosing another week

Robyn texted me to say Corfu was cold and wet

Looking at Gatwick and all the holidaymakers there just reinforced my view that I just can't be bothered with holidays. Too much like hard work for me; I'd much rather potter around here gently spannering my cars...
Top

My god, you've been to some poor airports Jim. Gatwick is an embarrassment to the UK. I can't imagine what first-time visitors think when they arrive there.

Glad the journey down went well, and I agree with your sentiments about holidays been a waste of time...
Top

My god, you've been to some poor airports Jim.

Oh yes, compared so some I've been to, Gatwick is heavenly... Mind you, I've not flown for over 11 years now and have absolutely no intention to ever again, whatsoever and under any circumstances...

Rattiva_Mike wrote:My god, you've been to some poor airports Jim. Gatwick is an embarrassment to the UK. I can't imagine what first-time visitors think when they arrive there.

Gatwick is like entering the Savoy compared with Luton airport, now that really is a depressing dump plus they have the cheek to charge you just to drop off passengers, not park just drop off, avoid Luton airport like the plague.

Great to see you and catch up yesterday Jim.
Top

DickieG wrote: Great to see you and catch up yesterday Jim.

And another thing about Gatwick, it is so spotlessly clean, even the car parks...
Top

CitroJim wrote: I must say the Costa coffee at Gatwick South Terminal is the worst I've ever tasted

Oh god yes it is awful! Tastes like Satan's jock strap (i would imagine).
Even 8 sugars and loads of milk couldn't disguise the foul taste!
Top

I found this highly amusing. It conjured up mental images of the Sydney Mardi Gras after-party.

They must have done a number on Gatwick for the Olympics, it was a complete dirty hole last time I was there, which is admittedly last October!

I always find Costa rough Jim, I think the coffee they use is too bitter. Starbucks is "ok", but you have to think of it as a pleasant tasting hot drink, rather than coffee, though the Colombian mafiaettes actually tell me their coffee is not bad at all.
Top

I found this highly amusing. It conjured up mental images of the Sydney Mardi Gras after-party.

A tenner for parking isn't bad - Sydney airport is dearer.

The crack about the divvil's underwear will enter my vocabulary!

That would describe the output of most of the chippies around here....

Well, I have been having fun today...

Paul (Citroenxm), bless him, gave me ABS two valve blocks at CXM, one good one and one bad one that I was free to play around with. And have I ever played today...

The relay board is sealed but with the use of a sharp craft knife around the seam it can be opened. There's not much in there, just a diode and a relay along with some potentially dodgy soldering. All aspects of the board can be tested without needing to open it and if anyone wants, I can go through the tests.

The one I opened tested fine so I turned to the valve block itself. I noted when I tested the resistance of the five electrovalve coils on the one presently on my car that four read 3.5 ohms but one was much, much higher. I found the same on Paul's duff block, one being sometimes 85 ohms, sometimes 22 ohms and at other times nearly open-circuit or nearly right

I checked the good valve block and found all five electrovalves were all 3.5 ohms.

I then pulled the valve block apart cautiously by undoing the four tight Loctited Allen bolts and splitting the block in half. The electrovales can then be removed. They're a lovely piece of engineering..

The valves themselves can be further disassembled by gently unscrewing their caps nearest the coil wires and the coil bobbin lifted out.

Here's a shot of the block in bits: 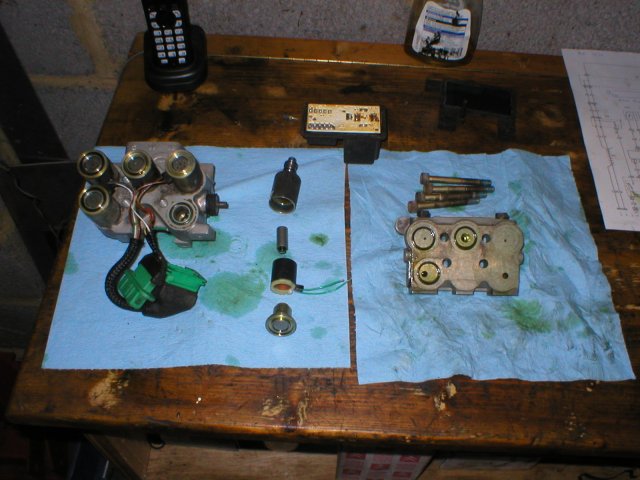 By looking at the resistance of the duff coil I could make it vary by wiggling the wires from normal 3.5 ohms to open-circuit...

With a craft knife I have scraped away enough insulation to almost get to the coil terminations. Work has stopped at this point...

This is the partially excavated bobbin: 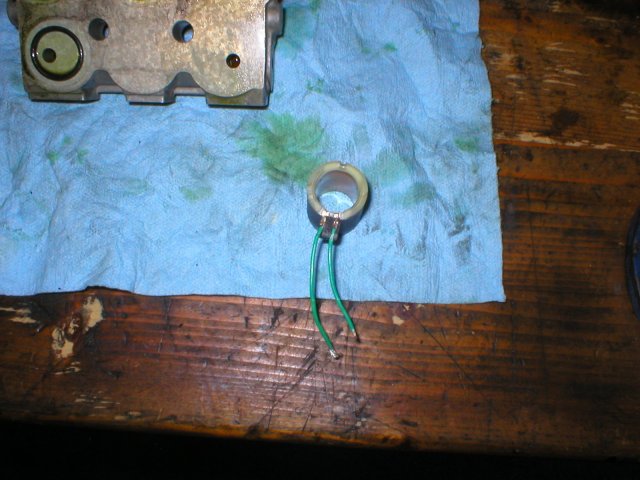 So, it looks like that could be the problem. The ECU must check the electrovalve coil resistances on self-test just as it does the sensors. It looks like the electrovalves may be amenable to repair and if not, a good valve of the right type could be swapped from another duff block or the coil bobbins swapped over or re-wound.

Each electrovalve has different coloured wires going to them to aid identification as follows:

Although it's a 7 way connector there are only 5 pins and pin 1 is the one nearest the edge.

So, don't throw away duff Bendix valve blocks - they can yield valuable spares

A huge thanks to Paul for making this possible

Also today Xac and Danielle popped around for a very nice visit whilst Cassy was having new tyres fitted. I guess they thought my place was a far nicer waiting room than that at the fitters

It made a very pleasant afternoon indeed

As usual Jim you are found in deep surgery

You have mastered the Xantia....and no doubt soon the XM

vince wrote:As usual Jim you are found in deep surgery

Yes, very much so Vince, something I've not done for ages now. Back to my old self really and I'm delighted. One small step on the road to recovery perhaps

Really enjoyed doing it too.


vince wrote: You have mastered the Xantia....and no doubt soon the XM

Baby-steps Vince, baby-steps but that's one reason behind getting the XM. I really wanted to get my teeth into something new and challenging