Xac wrote: Look, I only did it the once, and that was for the Rocky Horror Show!

She says duck breast will also be on offer.
Top

Xac wrote:Danielle now wants to get you tipsy to find out about "Khartoum"

Oh yes, duck will be great

Plenty enough temptation to tell of my Khartoum adventures

The manifold gasket job is done! It went all back together a bit easier than it came apart.

Here's the evidence. All that's left to do, on that job at least, is to fit the other half of the hot pipe and fit the cold pipe... 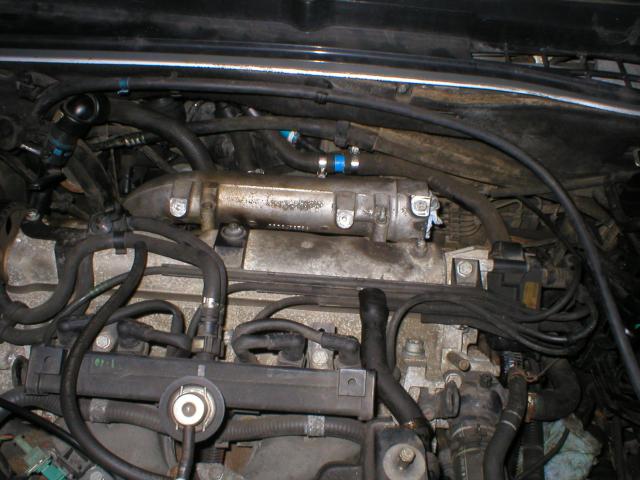 It was a heck of a job and getting some of the manifold nuts back on and tightened was a game. It was a job needing the dexterity of a brain surgeon and the flexibility of the India Rubber Man

Fir several jobs it was necessary to kneel on the slam panel to gain access to the manifold nuts...

The most difficult bolt of all was the one under the ignition coil that secures the turbo coolant pipe to the block.

I've been taking lots of photos for a planned write-up of the job although a lot of the work was impossible to photograph due to space limitations.

Space and access really is at a premium for this job but once again Mr. Citroen showed incredible design flair to make the job just possible. Some thought clearly went into the turbo installation on the TCT engine.

Funny how after spending a day down there it seems to get more spacious and access seems to improve as time goes on. It's just an illusion though...

The job was made easier by two main things, good old Plus Gas and ratchet spanners

What would we do without them?

Anyone know why the TCT has such an odd manifold gasket? Is it a heat shield as well as a gasket? Looking at the old one, it had been jolly hot at some point. It was warped and there was a big crack in it radiating out from No. 2 port.

I can see no logical reason why No.s 2 and 3 ports were so white looking unless it was all to do with the leak. Apart from that, unless those two cylinders are running weak due to bad injectors I don't know. All I do know is that apart from being very noisy it seemed to be running fine...

Next jobs will be the refitting of the front ram and making up a new rear ram bush followed by the replacement of the split CV boot.

Hopefully, when that's done, the pump and regulator will be ready for refitting...
Top

I'm trying to remember what the plugs were like when I replaced them as that'd give an indication on any lean running wouldn't it?
Top

Kneeling on the slam panel, what a picture that must have been

Still, it saves the backs of the knees getting sore from leaning up against the front of the car!

I bet it would be really interesting to sit in on some of these meetings where they decide how everything is going to be laid out. There's loads of factors that they need to take into account and what with engine and car design costing so much they've only really got one chance. A facinating thought.

Another thing that would be interesting is if it where possible for inanimate objects to talk on some occasions.
Top

Good work Jim, its not taking you long to get that Activa up to scratch again

Another thing that would be interesting is if it where possible for inanimate objects to talk on some occasions.

That would certainly be a big help

I suppose in a way its already happened, through Lexias and the likes

red_dwarfers wrote: Another thing that would be interesting is if it where possible for inanimate objects to talk on some occasions.

But could you imagine what it would be like when doing work though...

"Ouch, that hurt!" or "Mind where you're putting that spanner old boy!!!"

Another good day on the Xacmobile

The front ram is refitted, I made up a bush for the rear ram and fitted it. Odd for me to do that as I normally just make them and then post them. I rarely actually get to fit one.

Finally, I got the degreaser out and cleaned off a load of muck around the engine, especially where the pump had been leaking. All the ancillary components removed to do the main jobs have been cleaned too. I hate working on mucky engines and that one was just a tad on the mucky side...

I bought a 5L can of Brake Cleaner from our local factors. It works out a lot cheaper than buying aerosols of the stuff and it seems to do a good job without upsetting me as white spirit does.

I'm treating old V6 to a pair of new front tyres tomorrow, along with a wheel alignment as one tyre was showing signs of uneven wear. Knowing the offside trackrod end was a bit corroded to the track rod when I did the steering rack gaiter last year, I set about freeing off the nearside one. It was jolly tight and well set in place but the trusty old Plus Gas and my giant adjustables did the trick. I really didn't want the tyre place struggling with it and possibly butchering things down there. Also, maybe if they found a very tight trackrod end it may hamper them in doing a good alignment job. Now they have two very freely adjustable ones to work with.

Then Pleiades called to say the HP pumps and regulator were ready for collection. Cue a quick trip over to Sawtry and back to pick them up. Xac's pump was badly in need of a refurbish and his regulator was low on pressure. Here's hoping that'll cure Juliet's odd suspension behaviour.

Xac called in with a waterpump and timing belt kit so tomorrow my work is planned. Refit the pump and regulator and change the cambelt. We were amazed at how loose the old cambelt is and how it had not leapt off the sprockets...

If time (and weather) permits I'll round off the day by fitting the newly refurbished pump to Old V6.

Then, on Juliet it should just be the CV boot to do and then, mechanically at least, she should be good to go...
Top

Citroenmad wrote: Gareth did the manifold gasket on what is now my Activa with the engine in situ.

I kept thinking Gareth did the job on my old Activa when he swapped Turbos.. he did take the engine out for that but more because the clutch was weak...

That thread is absolute gold dust...

Chris570 popped over this morning and between us we removed the regulator and HP pump. I'm going to take them to Pleiades for checking and then see if that cracks the hydraulic problems. If it doesn't then goodness knows!!

Sadly, rain stopped play. It'll be good for the garden though...

Glad my thread came in useful, its what forums like this are all about!

TBH thats why i still come and visit here, because of all the decent free advice you get from proper people, this forum is very unique in this way, unlike the ST Drivers forum, who glean what info they can from you and never say thanks, talk about how great their cars are when in really this is far from the truth.

The only problem with this forum is how tempting it is to get another Activa...It would have to be a green or grey S2..
Top

How about a silver Mk2 that's recently had it's cambelt changed and exhaust manifold gasket replaced?

This really is the best forum I have ever been a member of, how could you possibly stay away Gareth?

Xac, After your Xant has spent a week in Jims hands, id guess you would want to be holding onto that!
Top

XantiaMan wrote: Glad my thread came in useful, its what forums like this are all about!

Without your guide Gareth, it would have been a whole different ballgame and I'd have declared the job impossible and lifted the engine. So a huge debt of gratitude is due

The great thing on this forum is that the jobs described have actually been done by the person and not pretended to do that job or wildly speculate at how the job might be done. I've seen the latter two in many forums and it's frustrating in the least. That's the great thing about the FCF, it's full of real people who do real jobs on cars and has a total absence of dreamers and wannabe mechanics

It's been a very busy week Chris, but very enjoyable too

It's always a great feeling to see a sick car getting better. makes me realise just how much I really dislike my day job

But, having said that I don't reckon I have the stamina left now to spanner week in, week out and I guess if I did it would cease to be the pleasure it is.

Thanks for the complements on the forum Chris

Citroenmad wrote:Xac, After your Xant has spent a week in Jims hands, id guess you would want to be holding onto that!

That's the dilema, I can't afford to keep 3 Xantias, but need 2.
Cassy isn't going anywhere, and Jenny's suspension is wonderful, plus she's a veg burner too so with my milage it makes sense to keep her for when Cassy is unwell.
That means Juliet is the one to go, she's petrol, and while her fuel economy should improve with the work Jim's done, it's not going to match the most economical engine of the range.
Oh why couldn't Activa's be fitted with a 150HP veg burner?
Top

Had silver, and already have a silver car, its too much! Defiantly fancy a green one though.
Top

XantiaMan wrote: Defiantly fancy a green one though.

keep her if you can though
Top
Messages: 7774