Sorry to hear of your continued illness Jim, you defiantly need some time away from your normal routine. Lets hope its nothing more serious and things get better when the sun comes out, we all need a bit of sunshine in our lives.
Top

CitroJim wrote:You've got a Xantia V6 then Franklin?
I need more details

Yep, dad got it yesterday. It's a late one being on a W reg, in silver and done low miles too.
I moved it yesterday and I forgot how much I love V6 Xantias!

Citroening wrote: I moved it yesterday and I forgot how much I love V6 Xantias!

They do grow on you Franklin, as do Activas... Hope it's going well...

The latter half of the week has been much better. Taking it easy and relaxing a good bit more than is normal for me has definitely helped and Saturday saw me feeling pretty well

Xac came round to change the cambelt and waterpump on Cassy and I got the urge to get the spanners going and as it was such a lovely day, I could not resist doing a bit on the Activa.

It's all a bit peculiar really, despite the earlier work on the height corrector the old fault of slow response to height changes has come back. It was so bad on Saturady that the rear end would hardly rise or fall. I wondered if my new pipework was causing a blockage or restriction but no, it was not that. I dismantled the pipework to check. I also whipped off all the spheres and pressure checked them and they were all more or less OK.

After refitting the spheres and doing a few good rounds of Citarobics and a rear brake bleed, the rear is rising and falling absolutely normally now but quite slowly when compared with the V6s. It in no way affects and drive (which is exemplary) so maybe I should just live with it but it niggles me

I know it's not really right and one day I'll get to the bottom of it...

On a brighter note, now the ambient temperature is up a bit the rear ram is dry again

Yesterday I really did a bit too much and today has been a very relaxing day recovering from it. This coming week is going to be the same, a gentle, relaxing one

I hope it'll enable me to have enough energy next weekend to install the new radiator in the Activa...
Top

What we bled out from the brakes was extremely frothy Jim, Cassy has been fine with it in her fuel tank

(the lack of green smoke is dissapointing though)

It would be awesome, never happened when I did it though... I wonder if the hydroflush i put in the fuel tank cleared out the engine? lol
Top

Pleased to report this week has been a good week and I'm feeling very much better now although still taking it easy...

So well in fact that this past week I've been to London and in doing so laidd a ghost. The only sensible way of travelling to London from here is by train and we often have a choice of a London Midland commuter special or if lucky a non-stop Virgin Pendolino. The Pendolino is the Activa of the train world; the high-speed tilting train. Last time I rode one I hated it and found the tilting most off-putting and actually a little scary as the line between here and London has some rather tight sweeping curves in places where the train really does tilt like a good 'un. Well, on Wednesday I rode a Pendolino again and thoroughly enjoyed it

No uneasy feelings. I'm getting better

I've also been doing some gentle spannering in the evenings this week on the Activa. I'm replacing the cambelt, waterpump and radiator. As i say, just gentle, easy stuff..

The cambelt on an Activa is delightfully easy and that was no real problem but by gosh the radiator has been a challenge. Firstly, the access is a bit on the tight side and secondly, the bottom hose bayonet was well and truly corroded into the socket on the radiator; it just would not play and come free however I tried. I tried all sorts and cogitated over it a bit. I thought I'd look at the trick you can do on a 2.1TD and remove the rad complete with the bottom hose and then deal with the problem in the workshop. On the Activa the bottom hose has a tee along it with a pipe going up to the expansion tank so that avenue is firmly closed. Removing the expansion tank to get at the bottom hose would involve a heck of a lot of work, including depressurising the aircon

Salvation arrived in the shape of Chris570

The old rad was weeping and it's core was well choked with debris and oily muck. It was the original and seeing how blocked it was it was no real wonder the car ran a bit warm last summer

I've given the aircon condenser and intercooler a good clean whilst I had access to them.

I've taken photos and will do a write-up on Activa cambelt and radiator replacement. The latter job is a bit of a devil on an Activa at the best of times; it is amazing what needs to be removed to give sufficient access to lift the rad in and out. Give me a V6 any day

Hopefully, tomorrow will see it all smoothly go back togetehr...
Top

Had the same issue with the socket on Juliet, had to smash it off the old rad then fight to get the remains off.
As for space, imagine trying to squeeze in a 406 rad which is slightly larger.
I would not have been able to do it without Ian's help.
Top

Jim your the only person in the world who would class cambelt / waterpump replacement as light work....
Top

Jim your the only person in the world who would class cambelt / waterpump replacement as light work....

The TCT is easy to change the belt on. Nice access, and one tensioner/idler.
Top

robert_e_smart wrote: The TCT is easy to change the belt on. Nice access, and one tensioner/idler.

Mind you, it's about the only job on an Activa that is easy

And even then there's a a big 'gotcha' with the crank pulley timing hole. Because it's on the outer edge of the dual-mass there's no guarantee it's accurate; invariably it's not

So there you go, typical Activa, even a prima facie simple job has a big complication....

I think its just because the word "timing" scares the crap out of me!
I have a belt and tensioner sat under the stairs for the Cx, I keep putting it off

All this work just to swap a rad 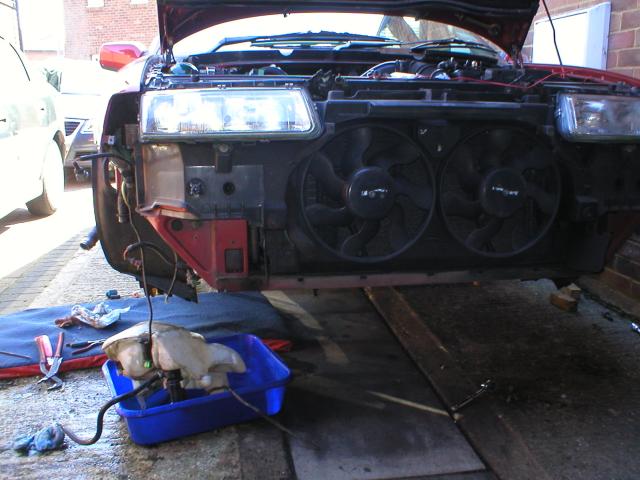 The first job to do when swapping a rad on an Active is this:

Lucky you Jim! I bet you're cursing the Intercooler now.
Top

Um, I don't recall doing that with Juliet Jim, took the rad out and the new one in via the top...
Top
Messages: 7774