Havnt got any this time but when we had that couple of weeks of snow at the beggining of the year i had icicles around two feet long hanging off the roof of the house, very unerving walking under them

this time though daytime temps arent coming above 0oc, its almost too cold to be working outside at the moment, its hard to remember tinkering with the cars in a T-shirt now and firing up the BBQ afterwards at 9pm for dinner!!.

I'm convinced autoboxes are easier than manuals Dean. The MA is a right tricky little devil

One nice fortuitous discovery I made was that the MA and BE3 use the same driveshaft seals. Strangely joined-up thinking on the part of PSA there...

The rebuild has begun; two are becoming one although progress has been halted a bit today due to the indirect influence of the weather requiring snow clearance and then writing up the February column for the Citroenian...

Houses around here are wearing some pretty impressive icicles. Haven't they killed people in the past in dropping off?
Top

I would have thought so yes, i think in colder climates where this is all normal they are removed just in case, they can get bloody big.
I think Autos are much easier, ok ive never done anything major with a manual box but there seems like a lot of pingfodoin potential with a Manual whereas with the auto provided you leave the valve block alone there is none, glad its all coming together anyway
Top

its almost too cold to be working outside at the moment

No, no, no, wrap up and keep moving! With school being closed due to the poor weather on Friday, I got the engine pulled out of my old estate, and the rear subframe removed from it yesterday!

I hope I never need to do any work on gearboxes, thankfully I have 3 XM auto boxes spare now; I like to have all my bases covered!
Top

thats only 1 per xm isnt it Robert? your going to need more spares

And anyway, it must be the wiskey thats keeping you going, getting the strut tops off of this xant today was a rather refreshing experience i can tell you!

thats only 1 per xm isnt it Robert? your going to need more spares Laughing

Yup, but I can get away with it, the 2000 TD auto has been sold, so that reduces my exposure by a third until I find another auto, plus it has one of my good TD valve blocks.

On the Autos. Aint it great:
* To have no troubesome clutches, pesky clutch kit and cables etc etc. . Then the gearbox and cheap nylon bushes that fail. The stretchy gearchange linkages too. All adds up. Sorer on driveshafts as well.

I'm aware of the downsides but that lot above can be torture on parts prices and labour.
Top

I quite agree Lexi and I really don't understand why the automatic has not completely and totally eclipsed the manual gearbox/manual clutch in recent years, especially in all those vehicles just used as A to B transport in urban gridlock. An auto in heavy, crawling traffic is bliss...
Top

You really should take the plunge Vince... You would really love a V6. Have you driven one? If not, we can fix that

Ran down to Somerset in the New V6 on Sunday to see the folks. The girls came with me and we had a great day. V6 ran like a dream.

Monday I'd planned to do a little light spannering on Old V6 to sort out the starter motor; it was a little reluctant to disengage on the first start of the day.

Before getting to Old V6, I gave New V6 a quick check over after her run and was shocked to find a puddle of oil under her. Closer inspection showed it to be transmission fluid

the cause was a leak at the Banjo union on the end of the gearbox where the pipe from the cooler terminates. It was a tad loose and a tighten has almost stopped the flow but not completely. I need to replace the copper washers eiter side of the banjo. 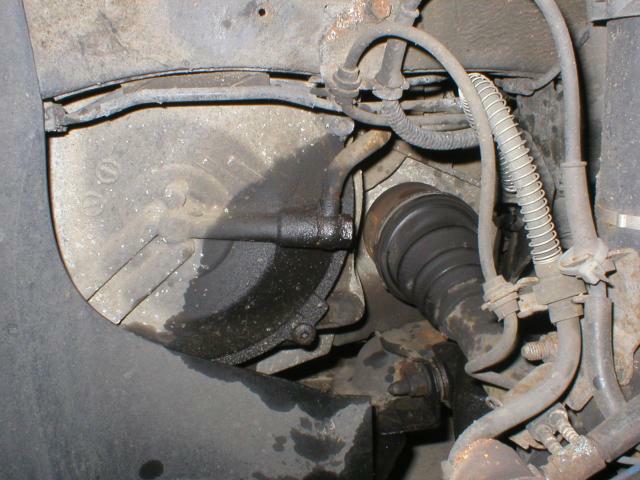 In 300 miles the gearbox lost a litre and a half of fluid. Good job I spotted it. A leak like that could have pumped the 'box dry...

Then I got the starter off Old V6 and gave it a check. Again, as is par for a V6, the motor comes off easily enough but space is a bit tight and the 10mm studs holding its heatshield on are a bit of a game, being in very close proximity to the front bank exhaust downpipe.

On the bench, the problem turned out to be a sticky pinion shaft. My fault. I lubricated it sparingly when I did the rebuild and only later did I learn that shaft should be clean and dry. The lubricant had gone very tacky and was enough to hold the pinion in engagement with the ring gear for a moment after the engine started.

A good clean up and all is now very good indeed.

Xac came round in the afternoon and we set about replacing his damaged auxiliary belt tensioner. Lots of fun as reported in Xac's blog

I did hope to take the Activa out for a spin, it being a nice day. It's too wet and dirty again now so an Activa run is now postponed until another dry day is upon us...
Top

Lucky you caught that leak when you did Jim!

Glad all of your lovely Xantias are going well

Its been difficult getting a dry day recently, ive been wanting to get the Xm for a run out but ive failed to find a suitably dry and salt free day.
Top

Keep that XM wrapped up Chris, the estates are particularily susceptible to the salt.
Top

Yep, i wont be taking it out just yet. I started it up today and ran it for a while, started no problem despite being stood for about a month now.
Top

Good spot on the leak Jim, isn't it strange that a bolt can stay sealed for 12 years and suddenly start to leak