One more thing to check, Jim, is a blocked hose. On one occasion when mine split (I think I have shortened it 4 times now

), while flailing about one handed and blind under the bumper I got a small quantity of something rubbery and gooey into the spigot on the pump, more or less blocking the hole.

After that you could feel the bellows trying to work (it would pull the pedal down an inch or so), but the cruise would not hold speed. I suspect (but have not checked) that the bellows has an intentional calibrated leak.
Top

Ahh, great stuff! Now that is something to check. I did wonder as the hose that had split had been off for some time and was well coated with general road muck.

I might be able to check without fighting the pump out into the open air bust somehow I think the best way will be to get the pump out and give it a good overhaul.

You know there is a round affair on the side of the pump with a white spigot and a few pipes connected. Is that a vacuum regulator?
Top

I have cruise control

After much more exhaustive testing, I proved the vacuum pump very good by applying +12V to pin 1 of the cruise ECU connector and earthing pins 6 and 7 of the same connector. This makes the pump run with both dump valves shut. I had a very strong vacuum at the bellows

I then checked all the conditions that should be present on the ECU were there and that was all good. I then checked the bellows...

Here was the problem. A small hole had worn in them where the bellows had been chafing the injection wiring harness. 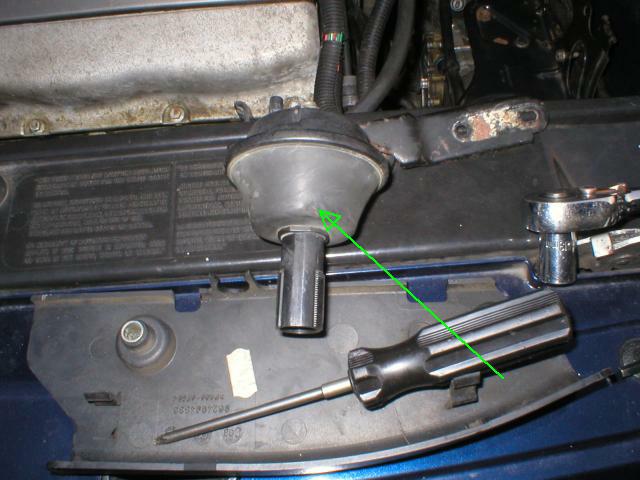 And here's the loom that's the cause of it: 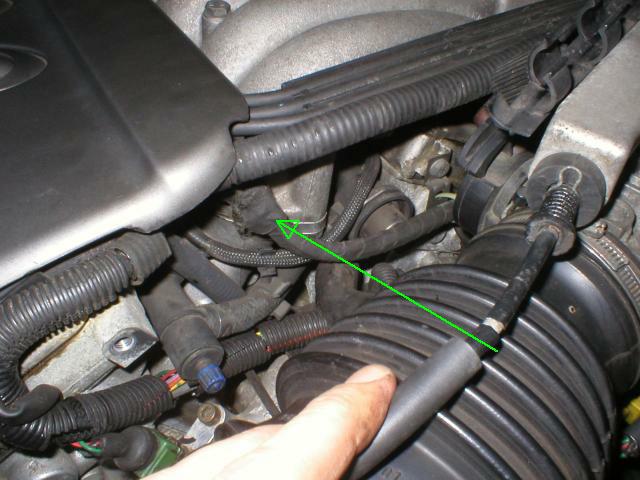 The loom had got very stiff over the years and was no longer properly secured to the channel it runs in just in front of the inlet manifold. I re-dressd the loom out of the way and ensured the bellows had clearance.

I then repaired the bellows with a bicycle tube puncture repair patch... 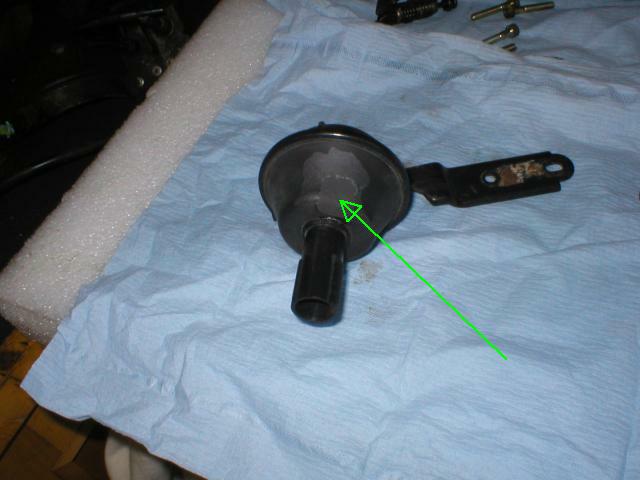 After checking for clearance, I put all together and went for a test drive..

It works a treat! How long the patch will last is another question. I'm now on the lookout for a spare bellows...

On my test drive I discovered I'd also cured another long-standing problem quite unwittingly. I'd lost my annoying low-speed trailing-throttle snatchy gearchanges

The only explanation I can think of is that the bellows fouling the loom was keeping the throttle a little open on the over-run and thus preventing the engine ECU sensing the throttle closed condition quickly enough and then relaying it to the gearbox ECU. I ought to have twigged as the ECU should prevent down-changes on trailing throttle and sometimes mine did, especially braking at a junction when it would really snatch first. All a thing of the past now...

I've been told that on the auto box, it'll drop two gears and accelerate hard to get back up to speed!

Toby_HDi wrote: I've been told that on the auto box, it'll drop two gears and accelerate hard to get back up to speed!

Congratulations Jim, I particularly like the puncture repair (should last a long while I would have thought) and the karma-bringing pro-active repair.

Good job jim and looks nice and neat to

If the patch fails try using a piece of bike innertube instead as its slightly thicker.
Top

there is a small chance I may have a spare vac unit ... will try to remember to have a look

interesting about the throttle too.. my engine bay is getting a bit clogged up in that area, I will check for a closed valve off throttle I think..
Top

Well done Jim!
I shall have to follow suit soon now i have a garage to work in in!
Mission cruise control coming soon...
Top

Hope my findings helps get yours working again Dave

This weekend I prepped the Activa for it's MOT. All fine except...

And I checked this because the V6 failed on it last time round...

Luckily, on the RH (Drivers) side so not the hard side.

An hour I thought will see this done and dusted. A trip to our local factors got one and where I discovered I'm now a true and pukka trade customer

To change the gaiter it's firstly necessary to remove the track rod end. Normally this is easy.

First problem was the 16mm nut did not want to come fully off; it got tight at the bottom of the thread despite plenty of wire brushing and Plus Gas and then, on a final turn, the taper "broke" meaning it just spun uselessly. I had to G-cramp the track rod end down tight so that the taper could "bite" again and allow the nut to come off. Finally it did..

Then I undid the locknut on the end of the thread where the end screws into the track rod proper. That was easy.

But would the end move? No way. It was very content where it was and no amount of persuasion would move it

More heat and more Plus Gas finally got a barest hit of movement and agonizingly slowly, by screwing back and forth, the end eventually screwed off..

What a bloody hell of a job. That bit alone took two hours...

Then it was just a case of fitting the new gaiter. This should be a simple job but access is incredibly poor and the only access is from under, lying on your back, trying to get a greasy gaiter end onto the end of the rack. It's one of those "have 16 goes, give up and try agin" sorts of jobs. It seems impossible and just when you are about to explode, it pops on so easily.

Then it's just the fiddly task of fitting a cable tie to secure it.

Still, 'tis done and I can find nothing else so later this week she'll be presented to the nice MOT man for her yearly check-over and the one visit she makes to a garage in the course of a year.

Strange I've now had two cars afflicted with the same unusual-ish problem in the same year. Must be something in the air...
Top

I've been told that on the auto box, it'll drop two gears and accelerate hard to get back up to speed!

The xantia cruise control has quite a gentle ramp-up, maybe 1MPH per second, so on a flat road it will never kick down, but on a reasonable uphill it will kick down to second, giving the passengers a bit of a thrill

My first car with cruise control was an XJ-S V12, I got the adjustment wrong on that, and it did use nearly full throttle on resume, which gave the driver a bit of a thrill as well.

She passed without so much as an advisory....

Whilst awaiting the verdict, I stripped a non-turbo Bosch diesel pump I'd dug out of my stash as a possible replacement for Kev's Boxer van up in the Peugeot forum. He dropped his and it ended up leaking like a colander...

Once apart (with difficulty) it was not hard to see why. It was half-full of foul-smelling rancid oil and had clearly been in this state some time. The oil was also watery and this had led to terminal rusting of the swashplate (camplate). It's still seized and I expect to find the lift pump a rusty mess as well. The governor is seized solid with rust as is the delivery sleeve on the HP pumping element; the latter is also covered in rust.

Here's a picture of the swashplate: 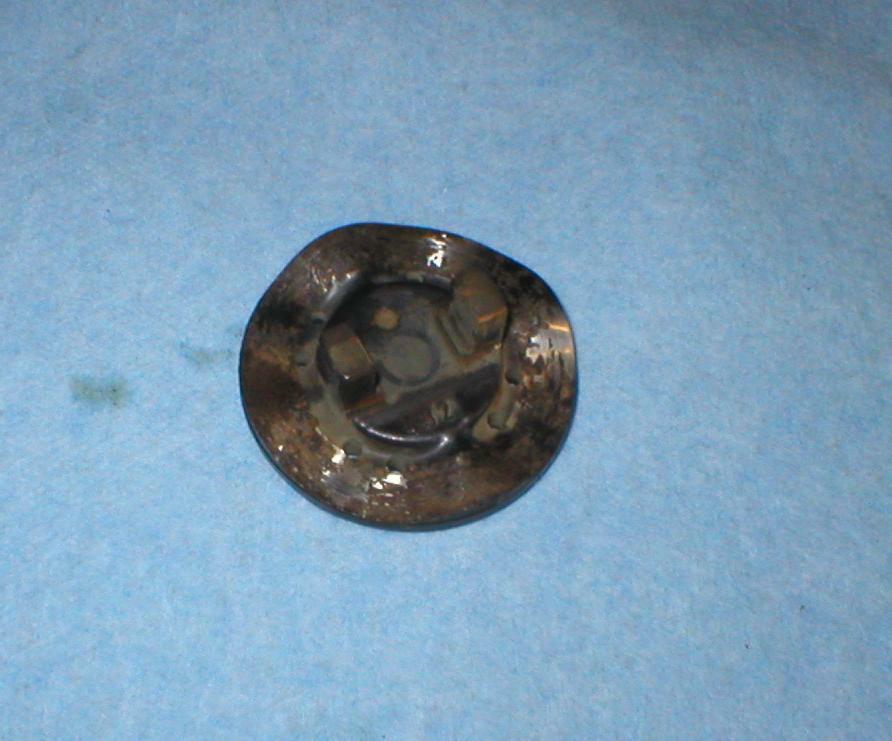 It should be bright, shiny and smooth and not covered in rust like this

This pump is good only for the bin

About the only things potentially any good on it are the alloy castings...

It was, in retrospect, a good job I did not just box it up and send it off to Kev as-was. Had he tried it on his engine, chances are it would have stripped teeth off his cambelt and wrecked his engine.
Top

Is there anything this man cant fix?

CitroJim wrote:I'm pleased to report the Activa has a nice new MOT certificate

She passed without so much as an advisory....

Whilst awaiting the verdict, I stripped a non-turbo Bosch diesel pump I'd dug out of my stash as a possible replacement for Kev's Boxer van up in the Peugeot forum. He dropped his and it ended up leaking like a colander...

Congrats on the MOT pass, you're pro-active maintenance has paid back dividends once again.

It has been said these pumps will readily rust internally if stored dry and/or in unfavourable environmental conditions and I guess that includes your garage. Mine are stored in my flat but even then I just found the plunger and control collar in the pump I'm rebuilding are so sticky, even those heavy springs can't move them - the leverset will stay firm in any position I set them to.

p.s. If this report means you've got a pump for spares, could I please have the governor idle spring set (at end and outside of governor cage) as either me or the cat's have hidden mine?
Top
Messages: 7774