Ahh, so we missed a bit

Still, we can go back in any time now free of charge for the rest of the year and I'm down that way pretty frequently...

Vince, you'd be in seventh heaven down there


pug_owner2002 wrote:Car colours the same as the flag by any chance?

I've made my sphere tester

A job that's been waiting in the wings now for about two years.

Just a lash-up at the moment to ensure it works and it does, nicely and tested against a known sphere...

Made from a pump and pressure regulator from an early "Sinker" Xantia and using mainly the pipes from same. The pipe from pump to regulator was far too long so I carefully coiled it around the LHM "reservoir" which serves to hold it in place...

The hardest bit was the gauge connection to a stub of 4.5mm pipe. I used a nut from an 8mm compression fitting that fitted the thread on the gauge and had to turn up a reducing feurrle from brass in the lathe. The feurrrle was then brazed to the pipe.

Originally I hoped a nut from a diesel injection pipe would do for the gauge connection but sadly it turned out slightly too small.. If that had worked, it would have saved a lot of work.

Here's a couple of shots of it. They're a bit dark for some reason 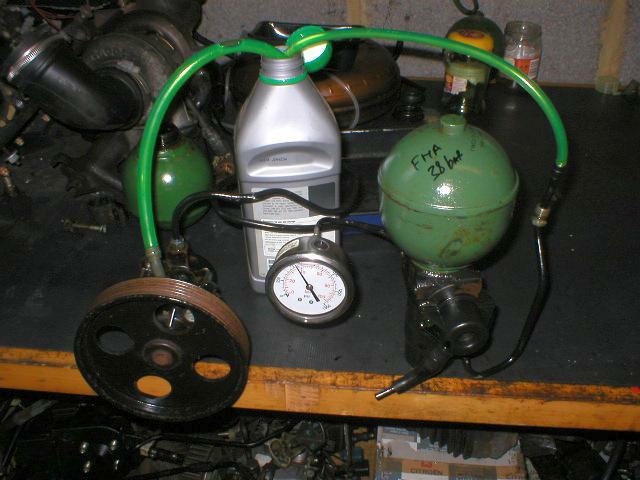 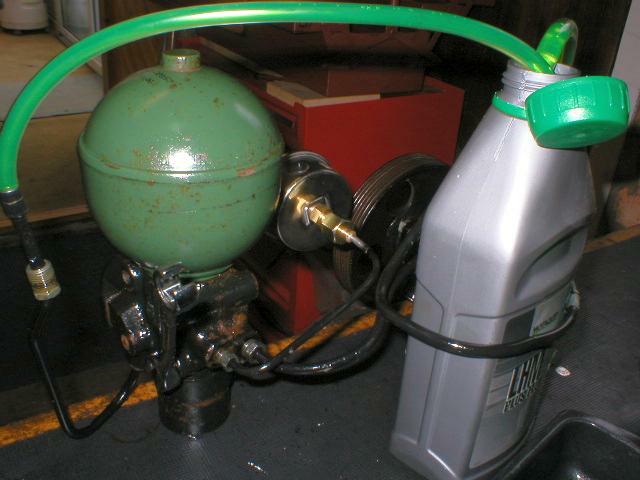 No leaks, it's been holding at 38bars now for a couple of hours... A test of my brazing skills if nothing else...

Next job is to properly fit it all to a baseboard and framework. For now it's sitting on the very end of my bench and fully functional. I have a feeling that is where it may stay for some time

Can I expect a visit from you with an armful of spheres in the near future Xac?

I'll get the kettle on

Damn Jim, you beat me! i had everything done but upon making the final flare the pipe got stuck and compressed in the flaring tool and its stayed there since

Nice one im sure it will come in very handy!
Top

Well done Jim, an excellent piece of kit, you'll have fun with a sphere tester no more guessing as to whether a sphere is serviceable. I regard mine as an essential tool for a Citroën owner.
Top

Turn the brightness up on your screen Jim, the pics look bright enough to me

Xac wrote:Turn the brightness up on your screen Jim, the pics look bright enough to me

Me too ... it looks all 'bright green and shiny' on my screen

Now all you need is an adaptor for testing anti-sink spheres....

RichardW wrote:Now all you need is an adaptor for testing anti-sink spheres....

It's not a problem Richard

Anti Sink spheres will test fine on the rig as they have the same external thread as a normal sphere and a normal sphere seal can be used to seal them for testing. It's not a bad idea to make sure all traces of the old 4.5mm seal are removed forst otherwise it might end up inside...

Jim, good work but ... the neighbours are going to think it's a bit strange, guys constantly getting off the local bus, walking up to your front door, with a load of odd green things in their hands !

Despite being very pre-occupied with may other things recently, I did manage to finish off the sphere tester. I couldn't just leave it as a rough lash-up on the end of the bench!

It's now properly built onto a sturdy aluminium plate and everthing securely mounted along with a new reservoir, an old metal LHM can rather than a plastic bottle... Mounting the pump took a bit of creative metal-bashing... 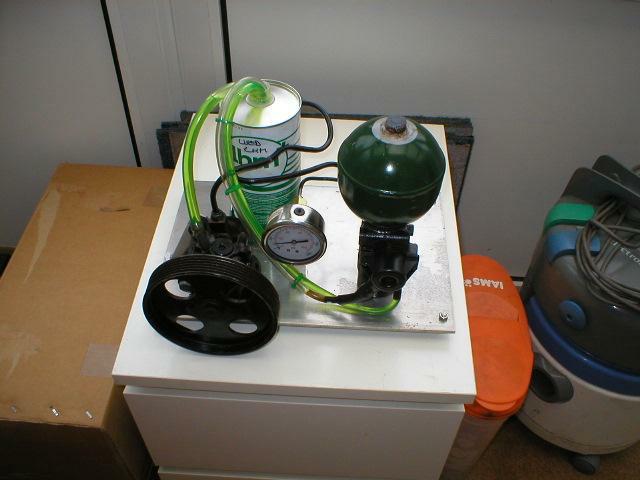 I've already used it in anger, testing the front spheres on my V6.

The two corners were a bit low at 30 and 35bars so they have been replaced. The centre hydractive sphere was bang-on...

Next task will be to check all the spheres on the Activa, along with a few other odd jobs.
Top

Very professional looking. How do you drive the pump?

I'll buy one off you, how much you selling these for Jim?

Just by turning the pump pulley by hand Mike. I'm using the "sinker" 6 piston pump with a high output and it only takes a few turns to get up to pressure.

In use, screw on the sphere under test, close the bleed valve and rotate the pump until the gauge reading does not increase any more. The gauge then reads the sphere pressure.

Release the pressure by opening the bleed valve whereupon LHM will rush back to the reservoir via the return pipe and remove. Hardy any loss of LHM when you remove the sphere.

"Blown" spheres will give them selves away by the gauge reading going up and up and up until it is off the scale. Then, even after releasing pressure, there will be an unholy mess as the sphere will be full of LHM

I'm not going into production Mike. They're not hard to build. You just need a pump, a regulator block and the pipe 'twixt pump and block. The best pump/regulator to use is one from a sinker as a 6+2 pump from an anti-sink has the PAS-side you have to deal with by taking it's output directly to the reservoir and a sinker pressure regulator has the FDV takeoff which serves as an excellent connection for the return line back to the reservoir. Also, the 6+2 has lower output so more turns. If I were using a 6+2 I'd use the PAS side (6 pistons) for the tester. The best pump of all would be a CX/BX or early XM type as it is easier to mount.

The biggest problem will always be the method to interface the gauge to the steel 4.5 mm pipe. I needed to fabricate an adapter.

The whole lot can be mounted on a wooden base-board.

If anyone wants, I'd be happy to supply full constructional details.
Top

Bit of working taking all those Activa spheres off hey , mind you there is only 10 lol!
Top

....I know its functional Jim but it also looks awesome

Id have one on a shelf in the house just to annoy Linda....I can hear it now....Vince WTF is that ?