I have my fingers crossed that things get a move on, and you are sorted out soon. The biggest problem is the sheer boredom being enforced upon you. The trick is to find something that you can currently do that is also enjoyable.
Top

James, all the very best for a quick recovery.

At least the problems have now been found and they're being treated...

James is right about finding something to do whilst you convalesce. It was when I was in my long recovery I got into cooking and baking in a big way so you may find yourself going off at an interesting tangent...
Top

I have always been into computers, and when I was given Elite Dangerous for a birthday present my Xbox wondered what it had done to offend me (it hasn't been turn on much since then). Big game, with lots to do. That helped with dealing with the boredom (from being unemployed for 6 months).
Last edited by Hell Razor5543 on 24 Sep 2015, 18:10, edited 1 time in total.
Top

You have my full sympathy, I have experienced misdiagnosis and botched care and painful issues with the urinary tract. Continue to make the best of what you can do with your days, and keep pestering the NHS.

The cottage sounds idyllic, I hope that it is a practical place to live in and heat.

If you are really bored, you could make as project of moving some topics from the supersticky section of the forum to the wiki.
Top

Elite dangerous would be amazing, I still play Oolite which is old Elite in colour. I don't have the processor and graphics card to play Elite dangerous. I guess I could get going a bit with the Wiki, been sort of meaning to but not really bothering. I'm tempted to start knitting, I love knitted hats and jumpers and always wanted to knit a big silly fluffy hat. Yep thats the one I'm off to ebay now for knitting needles wool and weird hat knitting needles.

I've got loads to ebay as well, just about to get rid of a mountain bike and some old Optician stuff. About £700 needed to take that Cottage and realistically afford to live until back in work. Considering you need a Citroen or a 4x4 to get to it hopefully no one else will take it. The couple that viewed it straight after me turned up in a Bmw 116i and they didn't look so comfortable. I was in a Volvo S60 D5 and that didn't handle it very gracefully either.

I went down to the Hospital this afternoon to clear matters up, I don't enjoy playing pass the parcel on the phone. It was worthwhile as it transpired that the urology department had no idea I'd had the first operation and their notes end 13 days ago. I managed to track down the rest of my notes quite quickly by visiting the ward. I am not able to gain access to them until tomorrow as the area they are in is quarantined due to asbestos contamination. I think with the Surgeons notes it should be reasonably straightforward to get back on track. A few more worries were thrown up but I suspect it's all just down to poor inter departmental communication and as soon as I have a copy of my notes should be resolved.
Top

Their ability to keep track of patient notes does not instill a great deal of faith James!

All the best for securing that cottage... When you do we need some pictures!
Top

James, you are a very restrained sort of chap......I admire your ability to keep so controlled in the face of "the system"

Stickyfinger wrote: Best of luck with the cottage, country living has some drawbacks, but I love it and can live without TakeAway Kebabs delivered at 11pm

Yes, but you have an excellent chippie just up the road from you Alasdair... Chippe beats greasy kebab any day!
Top

One of these days I'm going to stop there Alasdair and sample them. Maybe when we do the rustproofing job

Stickyfinger wrote:James, you are a very restrained sort of chap......I admire your ability to keep so controlled in the face of "the system"

Never had a problem with anger or control, it's the depression that gets to me. I spoke to the dept manager today and she's well onside now. I have agreed to give her until Monday to have me rebooked and confirmed. I think she was quite astounded by my thoroughness in tracking down the records and her.

I'm an old hand at Country Living, quite a few old barns and Cottages under my belt. Don't know what kind of Village Somerset is, chips and Kebabs delivered until 11.00! Thats just impossible.
Top

Come to a nice coastal area eg macduff, and get your chips, kebabs, and calazone, and pizza to die for, delivered until 11pm. In a french car too [emoji4]
Top

daviemck2006 wrote:Come to a nice coastal area eg macduff, and get your chips, kebabs, and calazone, and pizza to die for, delivered until 11pm. In a french car too [emoji4]

Please accept my apologies for being a pedant, but I dislike the phrase "to die for"! I much prefer my phrase, "to live for!". Mind you, if anybody is passing through Reading, and wants a decent Donor Kebab, "Ye Babam Ye" does a good range, with their signature kebab (the Ye Babam Ye special) being truly awesome, both in flavour and size. Only available in XL size (don't get any chips if you are on your own, they WILL go to waste!), the main lamb meat is cut freshly from the roll, and there is also a shish kebab consisting of several pieces of chicken and steak in there somewhere. OK, a bit pricey (£8:50 last time I had one), but I thought it was worth it.
Top

Well I took Red out for a spin yesterday. It wasn't the happy reunion I had imagined. First thing she did was snap the o/s handbrake cable then the trim fell off the o/s A Pillar. I laughed a bit, she's clearly upset, bump started her and off we went. After a little walk on the Beach she totally refused to start and my friend had to come and rescue us with jump leads. I don't dare go tell her that the insurance ran out at midnight and we're not going out again for about 2 months! or possibly even at all if green gets her way.

Having been for a drive I now know I'm still not really up to it. I am better than I was before observation wise (drug free!) but the discomfort of the stent made changing between accelerator and brake pedals uncomfortable and not something I'd want to do for more than a few minutes. It was nice though to be free for a few hours. Kelvin (Dog) loved it too, he got a proper swim and runabout like he hasn't had in a fortnight.

I nearly did end up in Scotland all those years ago when I fled to Wales. I was a London boy, fresh back from the Himalayas, and I applied for every every job in the Welsh and Scottish Mountains I could find. My next move will be to Canada or the Swiss Alps I think, both places captured my imagination when I visited them.

Knittings coming along, I have the beginnings of a hat now. I was aiming to do the middle left one but it's to hard so I swapped to middle right with no pom pom. 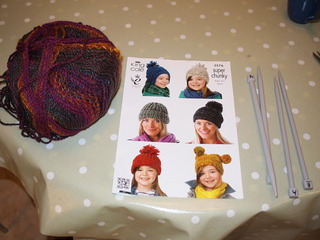 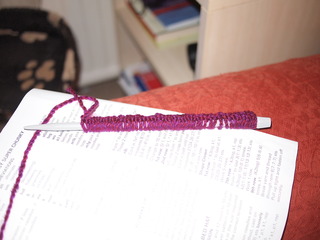 Getting the needles laced up like that took me hours to work out. I've knitted the first 8 rows now but forgot to take a picture, looks like being a wonky hat.
Kelvin, observing my distraction, made a beeline for the cat food and was caught redhanded. 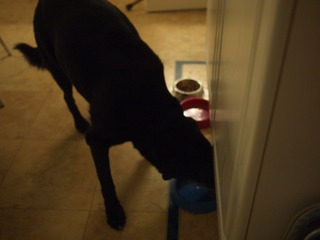 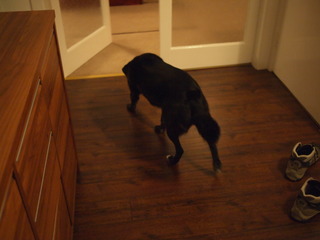 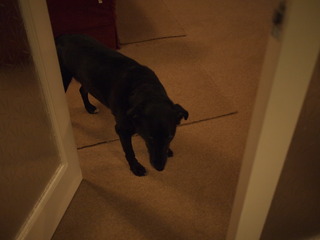 Naughty Dog! Look at his "oops I got caught face."
Top

Red is just being a very good car and telling you in her own way you are not ready to drive yet James..

Would a stop-gap automatic perhaps be a good idea?

Great stuff on the knitting... I can imagine that's very therapeutic and relaxing whilst making useful things... We all need woolly hats..
Top
Messages: 1560