My own plans for buying one have had to be put on hold[:(] For those of you sufficiently misguided to want a difficult to work on underpowered rustbucket with scarce spares, This seems to be the fount of all knowledge. It is in French but you will soon find petites annonces. www.gs-gsa.org
Top

GS underpowered?
I remember my dad towing a friend from the Peak district to Leeds with our GSA. It was only when they got to their destination that they found the handbrake was on on the car being towed.
Sadly, yes the rustbucket allegation is true.[:(] And they can be awkward to work on.
Top

the early 1015's were thrashy, underpowered and the gearing was too short.
A good late GSA with satellite dash and 1300cc 5 speed is a nice drive, never feels underpowered but economy is pretty crap when driven hard. Love 'em.
Rust, ah, yes.
Fro my time spent driving and working on these beasts I've had the Mig out
:
Front floors (inner)
Floors generally
Sills
Undertray
Front inner wings
Rear inner wings (almost impossible to repair correctly)
Rear subframe (nice job which involves removing the tank which is held on by about 30 rusty 11mm bolts)
I could go on.
I still rate the GSA as one of the greats. 7 years ago I was still doing my Swindon to Reading daily commute in a Y reg GSA Pallas of which I was very fond. Funnily enough, scrapped due to excessive corrosion in the rear inner wings and rear subframe, not had one since, but do get the occasional urge (maybe I should see my Doctor?)
Top

Yeah GSA,
Rust bucket well yes, but other than that a real joy, no water cooling problems, heater works from about 30secs after turning engine on, got quite good at changing that Y pipe on the exhaust, and the world record for front brake pads was about 7 minutes. Mind you the early handbrake adjustment was shall we say fun.... But Engine out was a doddle why don't they make front panels removeable like that anymore, crash protection I suppose.
This will make you smile a guy I worked with had a really nice one but the manifold to Y pipe pipe had gone, he took it to Kwikfit who somehow managed over the space of three days to replace it without removing the front underpan! a truly great achievement seeing as its not easy with the pan off...
Its interesting to note the mixed reception given to the Xantia by BX owners, I felt much the same way about the BX when I changed, in fact if it wasn't for the problem of finding a rust free one I would still prefer it(the GSA that is). What amazed me was that with the back seats down my BX estate has only about 4 inches more floor space than my faithfull GSA. MPG was about 33 as I remember. Last one I had did almost 200K on the original cams.
________
M110 engine
Last edited by ghostrider on 22 Feb 2011, 06:35, edited 1 time in total.
Top

Funny you should mention that about the notorious GS/GSA Front pipes Pete. We used to get to change loads of them after the various fastfits had either looked at the job, or had a go.
I've done quite a few without taking off the front panel, the LH pipe is fairly easy, especially if the car is on a ramp, but the RH pipe used to be a bit of a struggle. What we used to do was use an air hacksaw to cut through the preheat pipe where it joins the RH front pipe. If it was your own car, or someone who wanted a cheap job (or didn't care) then we used to air hacksaw 2 slots in the undertray, bend it down, then remove the clamp!
Once the new RH pipe was back in (now with detachable preheat pipe which made things a whole lot easier), we then welded the 2 bolts to the exhaust clamps to give ourselves an extra pair of hands when reassembling.
Used to do loads of them, wouldn't fancy it now.[:)]
A whole lot of people made lots of money out of the GS/GSA. Book time for a clutch? 8.4 hours, usual actual time about 2!
Those were the days, etc etc etc! [|)]
Top

Now why didn't I think of that Jon?

), stange how we first regarded the BX as somewhat complex in comparison with GS, I always felt there were two types of cits and I have long had one of each, complex being things like that other great but rusty car the DS in my case a late 23EFI hydraulic gear change one which was paired with a 2CV , CX with GS and now BX with Xantia, however now even the "simple" cars are complex relatively speaking on the other hand they are more reliable?!
Top

A lot of it is perception. When a new car that is deemed complex matures and there have been a couple of new generations of even more complex cars introduced in the mean time, we downgrade our perception of the once complex car. Of course in the interim period we have become knowledgable about the car and/or developed support/maintenance systems. Also the value of the car has reduced and speaking from a personnal perspective the less money I have 'invested' in a vehicle the less I expect from it or worry about it. I'd suggest that increased complexity in vehicle systems (excluding safety systems)is acceptable as long as there is a substantial increase in reliability.
Top

I'd go along with that Mark but the big question is can Citroen deliver on the increased reliability bit!?

As they seem to have a love of transferring design faults from one generation to the next with a cumulative effect are we going backwards? Still at least the electric window motors have improved over the Mk I CX
Pete
________
Vaporizer affiliates
Last edited by ghostrider on 22 Feb 2011, 06:38, edited 1 time in total.
Top

I was told about this car by a family friend at last weekends French Car Day in Brisbane, Queensland Australia.
On the way there, I managed to get lost in the middle of Brisbane, caught up in a traffic jam, found a way around the chaos only to end up in the middle of another snarl all of whom were going to a bloody football match & eventually arrived over an hour late. Got unpacked, found the camera just in time to see THIS driving off[:p][:p]
It's apparently a South African model called an X2 and is as rare as rockin' horse droppings. The friend who told me about it is a female who drives a BX because she knows me & can get advice anytime regarding service not because she's a Cit-nut and she reckoned this was the best looking car she'd ever seen; I had to agree....it's an absolute stunner & the only one of its kind in Australia.
Got any over there to match it? 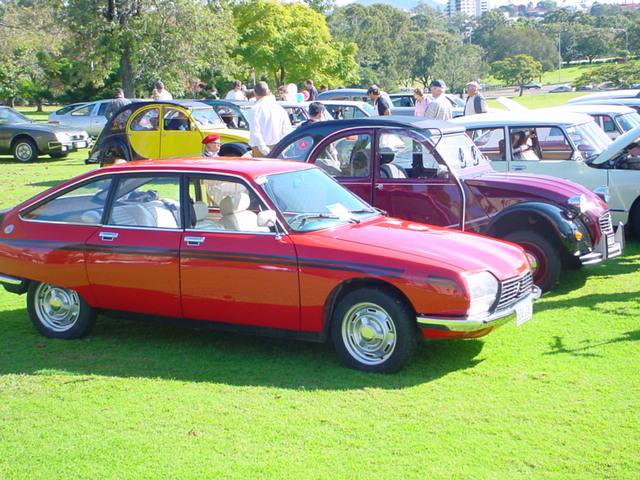 Thats a nice looker. We have a very few GS/GSA in this country that are still that good.
We did get the X2 in this country, in about 1975, the 1220cc donk was slightly uprated to 65bhp, there were front fog lamps, and high back sports seats, also the special wheel centres (which were black, not silver for this Market). In fact the X2 was probably the best GS in terms of speed and economy.Very few survive.In 1979 there was a GS X3 (in Rouge geranium or black) using the 1299cc donk later installed in the GSA, but on a GS 4 speed box, complete with rubber spoilers and a lurid interior.They were very rapid indeed although economy was pretty dire. I don't even know if any survive in the UK now.
There was also a GSA X3 for the French and some other markets (not UK) from 1979>.
In 1982(for the UK Market) a GSA X1 was launched. Again, high back seats and special trim, driving lights, and a shorter version of the 5 speed box for better acceleration. They are very very rare indeed.
There was, I believe a 1015cc GSX in the early 70's but I can't remember what that offered.
GSA X3 (French market version

Go for it Al!
Rip that C-Matic out, weld the brackets on the front subframe and lay a GSA 5 speed box in there.
You KNOW it makes sense.
Top